Just In Time For 4/20, Houston Scores Its First Cheba Hut 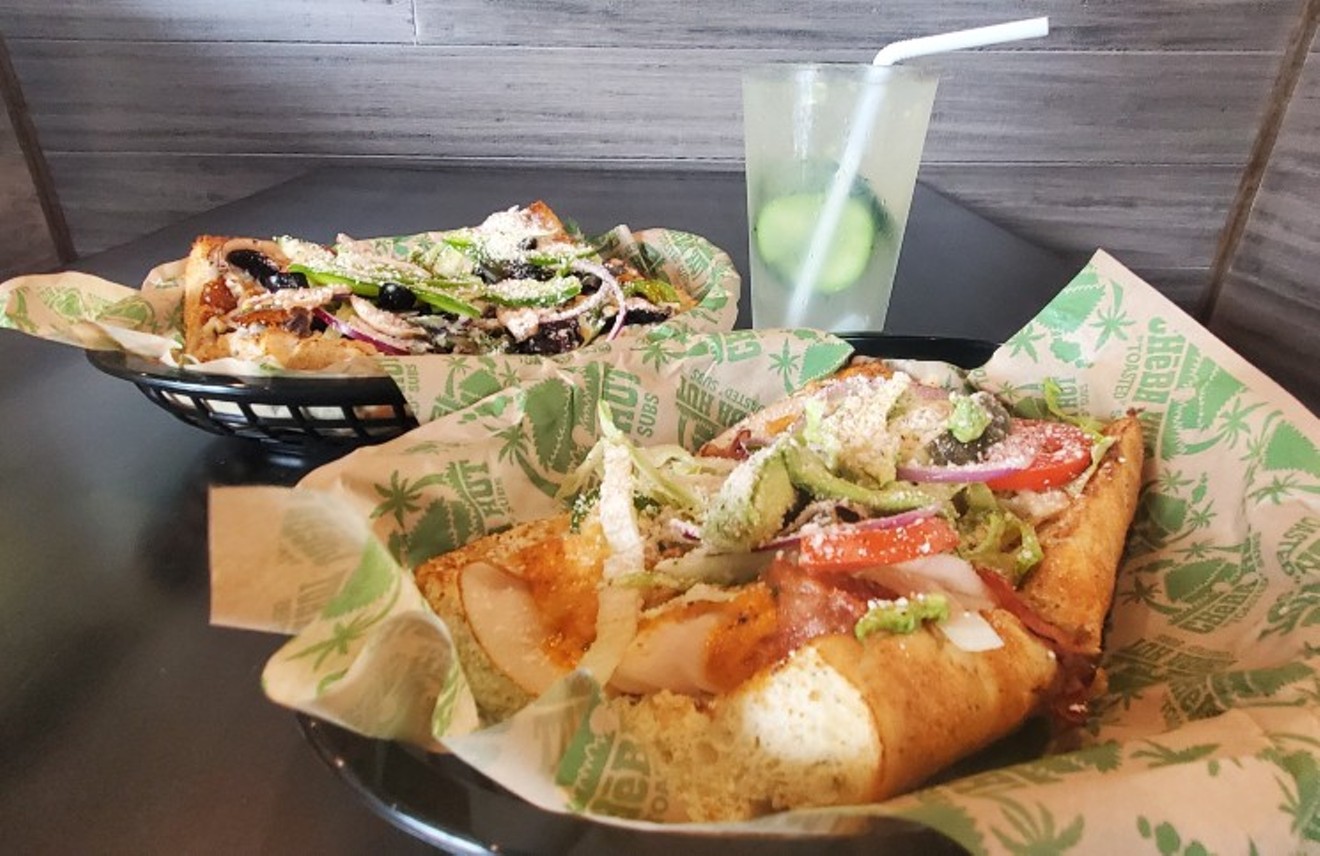 Cheba Hut opens this week just in time for 4/20 Photo by Jesse Sendejas Jr.
Recreational marijuana isn’t legal in Houston (yet) but the city has a strong cannabis culture and a real affinity for all things weed-related. That’s why it’s a little surprising H-town hasn’t boasted the “toasted” subs of Cheba Hut until this week. Thanks to a local couple, the 24 year-old cannabis-themed restaurant chain headquartered in Colorado is finally adding Houston to its ranks.

Houston’s first Cheba Hut “Toasted” Subs shop, located at 2150 Edwards Street in Sawyer Yards, opened Monday, April 18. Appropriately, some of its biggest grand opening events occur on Wednesday on 4/20, the official holiday of marijuana smokers everywhere. At a private event ahead of this week’s kickoff, we sampled the restaurant’s dank offerings and learned more about the store and its future plans from local franchise owners Raj and Ashley Gandhi.

First, the basics: Cheba Hut’s menu features more than 30 signature sub sandwiches served on a variety of freshly-baked breads made to order for each shop. There are appetizers - a.k.a. “munchies” - and desserts like Rice Krispies treats, plus a full-service bar with signature cocktails and local craft brews on tap. The stores have weekday happy hour specials ending at 7:10 p.m. (you can guess what time they start - that’s right, 4:20 p.m.) and takeout, delivery and catering are available.

The Gandhis chatted cordially with us just before the rush of the private event, which saw the colorfully decorated, eye-catching restaurant packed with eager and curious epicures. We slurped giddily on a “Dirty Hippie” - Deep Eddy Vodka, muddled fresh cucumbers and lemonade - while they told us about bringing the concept to the Bayou City.

“This is our first go at it,” said Raj Gandhi, of the couple’s foray into the restaurant business. “We bought the rights to three restaurants here in Houston. Obviously, this is our first. We plan to put the second one either in Montrose or in Midtown as part of our five-year plan.” 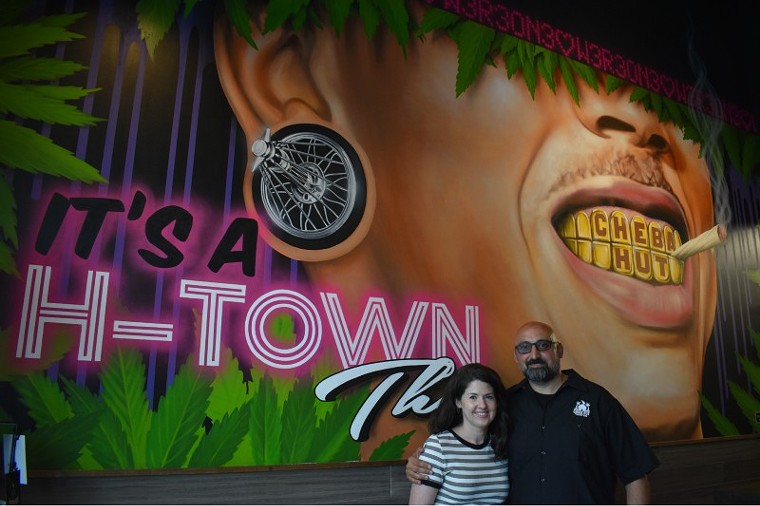 Ashley and Raj Gandhi
Photo by Jesse Sendejas Jr.
The Gandhis are Kingwood-area residents who spent a good deal of time planning this week’s opening. They said they researched different franchise opportunities, notably Orangetheory Fitness and Freddy’s Frozen Custard & Steakburgers, before committing to Cheba Hut back in 2019 before the pandemic began. Although they are not partakers and clarify that none of the food in any Cheba Hut restaurant contains cannabis, they did find the theme fun and relatable to Houston.

“I think people are becoming more open to it but yet, here in Texas where it’s not legal, it’s still kind of an edgy thing that gets people’s attention,” Ashley Gandhi said. “We just thought it was a fun theme.”

“It fits in well with Houston,” she continued. “We’re learning all about the rap culture, the weed culture, the arts scene. We love being here in Sawyer Yards because there’s so many artists that we’ve met. That’s been really cool.”

“That’s part of the reason we picked this particular place, is because of the arts scene,” Raj chimed in. “Being the fourth largest arts district in the nation, I didn’t know that until we did some research in this area, and there’s 400 arts studios all pretty much within walking distance of this place. This kind of culture is going to fit really well here.”

As they alluded, Houston creatives are also some of its most dedicated weed enthusiasts. Raj said they’ll follow the corporate recipes but every store is allowed some freedom to stamp its identity. The Gandhis have elected to tie in the city’s renowned hip-hop culture to the Cheba Hut in Sawyer Yards, particularly via some fun wall murals created by area artist Gelson Lemus.

The restaurant is stationed in Sawyer Yards
Photo by Jesse Sendejas Jr.
“Being here in the Houston arts district we felt like it was really important to find a very good artist to do our murals,” Raj said. “All Cheba Huts, they go out and find a local artist to do a unique mural that kind of encompasses their area. So, we wanted to bring in the Houston scene and Houston is known for some good rappers, so we have kind of a rap wall. And, also Houston is known for its slab cars - which is ‘slow, loud and bangin’’ - so we have a slab mural as well.”

“He’s a very special person, a very special artist,” Ashley said of Lemus. “We encouraged him to put his own special touch on things. All of his art pieces have these own special parts of him that he puts into them and that’s what we wanted. We loved having a local person.”

Part of the fun is spotting all the weed-culture notes in the restaurant. There are green lights glowing beneath the bar to set ambiance, a painting of a spliff-puffing Mona Lisa and, most notably, an array of menu items named after actual strains of weed and other staples of cannabis culture. We asked which subs we should try and in what sizes. A 4-inch sub is a “nug” and goes for $6.49. The 8-inch variety is a “pinner” and runs $10.39 and the “blunt,” the shop’s foot-long offering, costs $13.69. Any sub can be served as a salad for $11.29.

“One of the things that makes our sandwiches really special is the bread. It’s proprietary to us, made fresh by a bakery. We’re known for our bread, it’s delicious,” Ashley said, noting there are white, wheat and garlic herb varieties with the latter being the restaurant’s most popular. “I just think having good, toasty bread in a sandwich is important because it’s not going to hurt your mouth when you eat it, it’s got the perfect texture. So we have that part down pat. And then we make all of our sauces everyday in house. We use a lot of different sauces to incorporate different flavor profiles. We will make a basic sandwich, but we like to create unique combinations.”

The sandwiches, "munchies" and desserts are a stoner's dream meal
Photo by Jesse Sendejas Jr.
Raj added that the veggies, cheeses and meats are sliced fresh daily. With all that in mind, we scoured a lengthy menu and settled on the White Widow, the store’s chicken, bacon and ranch sub, topped with ‘shrooms, provolone, lettuce, tomato, onions and pickles. We went with wheat bread. We tried the shop’s white bread on the 5-0, - “all the pig, baby!” shouts the menu. The sandwich is packed with smoked ham, genoa salami, prosciutto, pepperoni and bacon. That might sound ridiculously heavy, but the freshness of the veggies, teamed with Cheba Hut’s “shake” and house dressing made for a delightfully light bite.

Next we sampled the Power Plant, a veggie sandwich filled with a spring mix, tomato, onion, pickles, cucumber, mushrooms, black olives and green bell pepper. We chose the garlic herb bread and it was fresh and sturdy but not impenetrable. The star of the sandwich, which made it our favorite bite of the evening, was the blend of fresh hummus and guacamole in the sandwich.

For munchies, we tried a stoner’s delight dubbed Loaded Not’Chos, your standard melted cheese with jalapenos, teamed with onions and black olives all atop nacho cheese Doritos, with a drizzle of ranch and hot sauce, like something a gourmet smoker would concoct at 3 a.m. Also perfect with the beers from Saint Arnold and Eureka Heights we chose.

The meal was complete with dessert, one of the restaurant’s rainbow-colored marshmallow krispies treats and the “Sticky Icky,” a hearty PB&J sandwich. We washed the sweet stuff down with red and blue varieties from the Kool-Aid bar at the back of the restaurant. Before we left, the store sent us home with a blunt, the 12-inch sandwich. That one was the Kali Mist, a spicy club with chipotle mayo and jalapeno to enhance the roasted turkey breast, bacon, pepper jack, avocados and fresh veggies in the mix. It was a great late-night snack.

This was a very small sampling of the restaurant’s full menu, which actually includes some off-menu items called “secret stash” items. Ashley said the restaurant’s veteran bartenders are working on signature secret stash drinks to join the likes of the Dirty Hippie or the Hash Can, a limit-two elixir best described as a Long Island Iced Tea infused with Red Bull.

A trio of Hash Cans, a signature Cheba Hut cocktail
Photo by Jesse Sendejas Jr.
While the bar’s secret stashes are still in development, there are two secret stash sandwiches ready to order which reflect local flavor. There’s the Grape Ape, a meatball and bacon sub graced with jalapeno cream cheese and, in a nod to Houston’s ‘purple’ culture, grape jelly; and, the Still Tippin’, which teams grilled chicken breast with peanut butter, honey sriracha, pineapple, jalapeno and pepper jack, all presumably to the delight of Houston rapper Mike Jones who scored a big hit with a song of the same name.

Ashley Gandhi took us through the restaurant’s 4/20 specials. She said they’re expecting a large crowd and they’ll have a DJ spinning from 5 p.m. to 9 p.m.

“People can choose any nug they want for $4.20 and we’ll serve it to them on a commemorative frisbee with Cheba Hut on it,” she said. “And then the first 100 customers get a grinder and the grinder has a QR code on it and they’re mixed up. Some people, it’ll take them to a funny YouTube video and others will have a chance to win all sorts of merch and gift cards and one person will win a trip to Colorado.”

This may all sound like a lot of fun and the Gandhis hope it will be for Houston food, weed, arts and hip hop lovers. They hope you will all '‘juana' stop by Cheba Hut soon.

“Let’s do something fun, let’s start a business,” Raj Gandhi said he told Ashley when they decided to invest in a new venture. “We didn’t realize what we were getting into with the restaurant, it’s a lot of work. We probably picked the hardest business to get into, but I think it’s going to pay off at the end, there’s lots of rewards in this line of work.”
KEEP THE HOUSTON PRESS FREE... Since we started the Houston Press, it has been defined as the free, independent voice of Houston, and we'd like to keep it that way. With local media under siege, it's more important than ever for us to rally support behind funding our local journalism. You can help by participating in our "I Support" program, allowing us to keep offering readers access to our incisive coverage of local news, food and culture with no paywalls.
Make a one-time donation today for as little as $1.