1 of 52
Photo by Eric Sauseda
The Shooting Stars on the main concourse
Game two between the Houston Astros and the Boston Red Sox was pretty much a repeat of game one. The Astros took the early lead. The Red Sox threatened. The starting pitchers struggled. The Astros hit a couple of homers. The Astros won 8-2, just like Thursday. The Astros lead the best-of-five playoff series with the Red Sox by a 2-0 margin. The teams now head to Boston for game three on Sunday. It could all end there if Brad Peacock can shut down the Red Sox. (Photos by Eric Sauseda for the Houston Press)

Astros fans gathered at Minute Made Park to watch game six of the World Series against the Dodgers. Many were decked out…

The Houston Astros just won one of the craziest world series games in the history of ever with its 13-12, tenth inning… 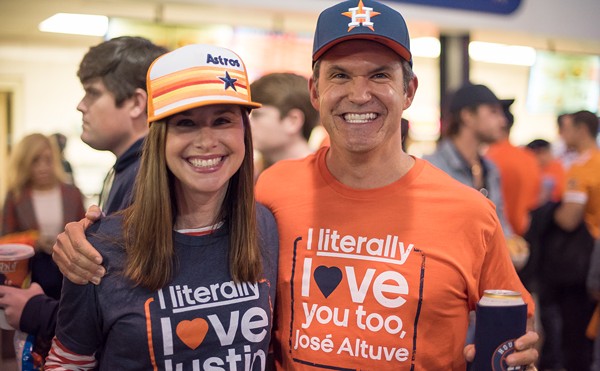 The Cute Canines at Dog Day at Minute Maid Park

There was plenty of tail-wagging fun this Sunday with Dog Day at Minute Maid Park. Astros rally pups and their humans came…

With Sunday's win against the Seattle Mariners, the Houston Astros officially clinched their first division title since 2001. With Justin Verlander taking…