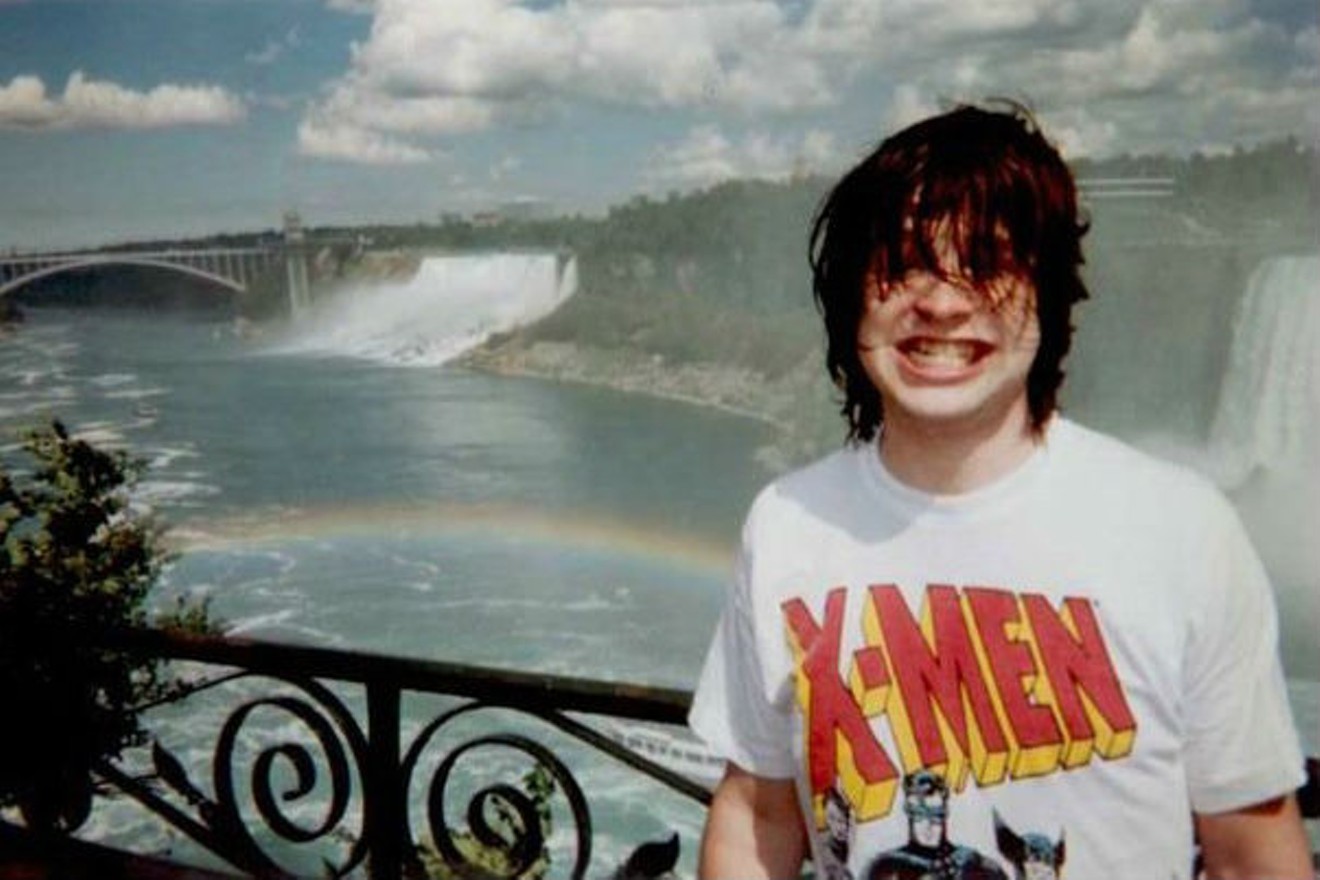 Ryan Adams at Niagara Falls, Ontario, during Whiskeytown's "RV" tour of 1997. Photo by Thomas O'Keefe/Courtesy of Skyhorse Publishing
In 1997, Thomas O’Keefe got a call from the management of a rising alt-country band called Whiskeytown, asking if he’d be interested in taking on the job of the group’s tour manager. He was at something of loose ends professionally at the time. And as the bassist for the punk group ANTiSEEN, he’d practically done the job already. So he said yes.

But just like a good country song, his tenure – which lasted until the group broke up after a performance in Austin at SXSW in 2000 – was full of drama, erratic personalities, missed opportunities, and no small share of heartbreak along the way. O’Keefe has just put down on paper with co-author Joe Oestreich his experiences on the road with the group and Adams in the book Waiting to Derail: Ryan Adams and Whiskeytown, Alt-Country’s Brilliant Wreck.

“Tour managing Whiskeytown was going to be like chaperoning eighth graders on a class trip to D.C.,” he writes. “Eighth graders who drank and smoked pot.” He’ll be signing copies at Cactus Music on June 28 at 5:30 p.m., with an onstage interview and audience Q&A.

Whether you called it alt-country, cowpunk, or No Depression, in the ‘90s there was a resurgence of interest in new music with a classic country sound among young listeners. It respected the genre’s traditions, but fused it with a certain youth and contemporary attitude. Bands like Wilco, Uncle Tupelo, the Jayhawks, Old 97’s, Jason and the Scorchers, and Son Volt were leading the charge.

Whiskeytown spring from one of the music’s geographical centers was the Raleigh-Durham-Chappell Hill area in North Carolina. And Ryan Adams – only in his early 20’s – was seen as a real talent. But he did have an ego, and was an enthusiastic intaker of drugs and drinking.

“I had heard of them, but I wasn’t into that kind of music, I liked KISS and Cheap Trick and the Ramones,” O’Keefe says today. “But when I started working and handing out with Ryan, I thought ‘good God, he’s a freak of nature!’ The way he churned out great songs like there was no tomorrow. It’s like he has antennae and he’s just catching songs that are landing in his lap one after another.”

There’s dissection of the real Ryan Adams that O’Keefe saw and who for a time lived in his apartment. But also how his personality changed when he slipped into the “character” of Ryan Adams, surely fertile ground for any psychiatrist. And the band admittedly lost a lot of mojo in doing what O’Keefe refers to as just a lot of “dicking around.”

But while Adams was clearly the leader, O’Keefe also had to work with other members of the group – some who rotated in and out, but always with violinist/singer Caitlin Cary. Her sizable contributions to the band are sometimes overlooked. O’Keefe’s tenure with the band coincided before, during, and after the release of their amazing second album, Strangers Almanac, which many predicted would shoot them into the big leagues.


Interestingly, O’Keefe makes a lot of comparisons between Whiskeytown and alt rockers the Replacements, and indeed there are plenty of similarities between the groups, none more so than in the tendency to self-sabotage. Adams (like the ‘Mats Paul Westerberg) would routinely show up to concerts drunk, deliver half-assed, short shows, blow important gigs and media interviews, and alienate and criticize their own audiences who had come to see them.

“With both bands, from night to night there was no consistency. One day, the show would be the most half-baked, clock-in and clock-out bullshit. And then the next night the show would be so magical, it would renew your faith in rock and roll and humanity,” O’Keefe says.

“And then there would be a show with a lot of punk rock antics and behavior. I loved it, because that’s where I came from. But then as tour manager, I would have to go and clean up the mess and try and collect money from a club owner who would be really pissed and ready to kill me. But the head of the snake leads the snake around, and the show was whatever Ryan wanted to make of it.”

While O'Keefe was often frustrated with Adams, he has no such ill feelings about the young musician's inherent, scarily good talent. He describes a dismal show that has him down, but when Adams returns to the stage solo with an acoustic guitar to serenade the remaining crowd with his song "Avenues," he and the audience are mesmerized by the power of the material and the performer. Front of Whiskeytown tour laminate, featuring Thomas O'Keefe.
Photo by Thomas O'Keefe/Courtesy of Skyhorse Publishing
Whiskeytown was tapped for a possible career-making slot opening an outdoor shed tour for John Fogerty of Creedence Clearwater Revival. But it was clear that the classic rock audience had little interest in Whiskeytown’s hopped up tear-in-my-beer music, simply waiting to hear the CCR classics. Instead of being inspired to the challenge, Adams would openly return the disdain during the band’s performances.

Waiting to Derail (its title taken from a Whiskeytown song) also details the many times O’Keefe would be dispatched to locate Adams or another band member who had not shown up for a hotel lobby call or show, negotiate inter-band squabbles and outer-band romantic relationships, and hide the drugs.

In one incident, the only thing that seemingly saved a complete narcotics bust of the tour bus on the U.S./Canadian border was when band members struck up a conversation with a border agent about their mutual love for the novels of John Steinbeck.

In writing and researching the book, O’Keefe had interviews and reminiscing conversations with all of Whiskeytown’s band members (save a reluctant Adams), record company execs, managers, and crew. But what surprised him was just how little all actually remembered about the touring, so the book is about “95%” of what it would be had he just relied on himself.

Despite having Ryan Adams at a groomsman in his own wedding, O’Keefe has had little contact with the musician since Whiskeytown’s demise. Adams himself has gone on to considerable success both as a solo act and with his current backing group the Cardinals. Adams declined to speak with O’Keefe for his book, but the musician — who has since cleaned up his act and admitted past transgressions — is aware of it.

In the years after his tenure with Whiskeytown, O’Keefe has continued his career as a tour manager with acts like Train (“the hardest working band in the music business”), Mandy Moore, and Third Eye Blind. His current job is as the veteran tour manager for Weezer, who play with the Pixies in Houston the day after his signing.

When asked what the main differences between the two “W” bands which have bookended his career, and it has a lot to do with age and experience of both himself and his charges.

“I’ve worked with adults the last 20 years. Everybody wakes up when they’re supposed to and there's less of a babysitting component,” he laughs. “I’m also not riding around in a crowded van pulling a trailer behind it!”

Thomas O’Keefe will discuss and sign Waiting to Derail on June 28, 5:30 p.m., at Cactus Music, 2110 Portsmouth. For information, call 713-526-9272 or visit cactusmusictx.com
KEEP THE HOUSTON PRESS FREE... Since we started the Houston Press, it has been defined as the free, independent voice of Houston, and we'd like to keep it that way. With local media under siege, it's more important than ever for us to rally support behind funding our local journalism. You can help by participating in our "I Support" program, allowing us to keep offering readers access to our incisive coverage of local news, food and culture with no paywalls.
Make a one-time donation today for as little as $1.