There’s some serious goodness to be had with the Deep Fried Chicken with dry Chili Peppercorn. Photo by Troy Fields
It’s a well-known, everyday recipe in the world of Sichuan cooking, but the simple, spicy, deep-fried chicken cubes with dry chile peppers are seriously good at Chengdu Taste. Dark-meat chicken is best for this preparation, with each piece completely encapsulated in a crispy, light-golden batter of cornstarch. The amount of dried chile peppers and toasted peppercorns tossed in the mix could readily feed a small village of spice lovers.

Earlier this year in May, new signage with Chinese characters appeared above the doors of the former Banana Leaf in the H-Mart shopping center at Bellaire near Sam Houston Parkway. Quietly, a West Coast Sichuan giant was preparing to open in Houston, and everyone took notice.

Houston’s Chinatown is only the third location of Chengdu Taste to open in the United States outside its home state, California. The other two outposts can be found in Honolulu and Las Vegas. Menus appear to be the same at all locations, and our H-Town locale offers a BYOB policy with no corkage fee, so pop your own bottles and they’ll provide the glasses.

Be sure to bring your appetite for adventure and spice to Chengdu Taste. The menu offers a variety of proteins, from frog, rabbit and mutton to pork intestines, trotter, kidney and gizzards, and the MVP ingredient is definitely the Sichuan peppercorn.

The wontons in hot sauce, accompanied on the menu by the phrase “numb taste,” were one of the table favorites. Although they’re not as red, these wontons are like the red chile oil dumplings or wontons found at other local competitors, like Mala Sichuan and Pepper Twins. A common mistake would be to order these with the thought of having them as appetizers. Take our word for it, save these until the end. The “numb-taste” description doesn’t do the experience justice and the wontons will greatly compromise the flavors of other dishes.

Sichuan peppercorns are not actually from the pepper family; they belong to a family of citrus plants. The 3 percent of hydroxy alpha sanshool found in the peppercorns can deliver a tingling sensation that equates to “touching the terminals of a nine-volt battery to the tongue.” The sensation of a swollen tongue and lips, followed by a lingering oily, waxy residue on the tongue, is very common. Even the taste of water will be altered, but don’t fret; the experience usually lasts only a few minutes.

Many common Sichuan preparations are offered on the menu, all available with a variety of proteins. Guests can choose to have meats boiled in green peppercorn sauce, red peppercorn sauce or a more ominous “hot sauce.” A glance around the dining room found a number of hot pots and earthen (clay) pots with oils and chile flakes swimming atop the pots.

Both the boiling fish and the boiling beef arrived in a stainless-steel pot with handles. Doubanjiang (spicy bean paste), along with other spices and Sichuan peppercorns, is used along with water and oil in this simple yet complex execution of stir-frying. The white fish was fresh and flaky; we assumed it was tilapia, but the server could not verify our guess. The tender pieces of beef were flavorful and seemed to soak up a lot of the peppercorn seasoning, but the numbing effect was not significant. In both dishes, a small heap of mung beans nestled underneath the protein, with pools of red oil glistening among the pieces of meat and fish, fresh minced garlic and red pepper flakes.

A pot of tea is delivered to each table upon arrival. On our initial visit, sadly, we found that the service was typical of that at other Asian eateries in Chinatown. Lackluster care, indifference and even a minor annoyance shown toward any signal for attention is the norm. We waved the server down for water, and a pitcher was delivered along with three small plastic cups for our party of four. Paper napkins are a commodity, but if you catch someone’s eye, a second one will be delivered as well.

A second visit during lunchtime provided a completely different experience. We were greeted with a warm smile, an already waiting pitcher of water and a second napkin halfway through our meal without sending up the bat signal. 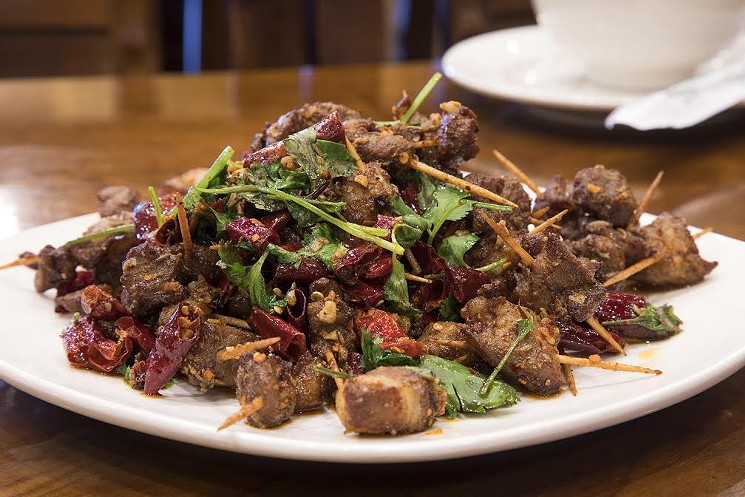 Toothpick Lamb with Cumin really is served with toothpicks.
Photo by Troy Fields
Wooden sticks of all sizes are a thing at Chengdu Taste. At dinnertime, a teepee structure of skewers could be seen at nearly every table. We opted to wait for the follow-up visit because there were so many other dishes that intrigued the palate. A very interesting plate arrived with dozens of tiny pieces of mutton pierced through with toothpicks. The toothpick lamb was satisfyingly salty; the cumin was strong, but provided that unique balance for the gaminess of the meat. Tender and chewy at the same time, the lamb was akin to a jerky that oozed strange, exotic flavors and finished with a saltiness that made the tongue crave another bite.

We were very disappointed to hear that the chicken skewers were not available until the late afternoon on our second visit.

Our attempt at adventure brought a plate of diced rabbit with baby ginger to the table. After a warning that there were “small bones” in the dish, we thought we were prepared, but nothing quite prepares you mentally for the teeniest, tiniest bones from what one can only imagine as Little Bunny Fufu. The rabbit pieces are stir-fried with sliced green peppers, a mixture of jalapeño and serrano, along with green peppercorns. The spice level is intense and the careful process of chewing the rabbit and spitting out the bones is exasperating. We gave up after a few bites of what tasted like chicken yet never ceased to feel like a cute bunny. 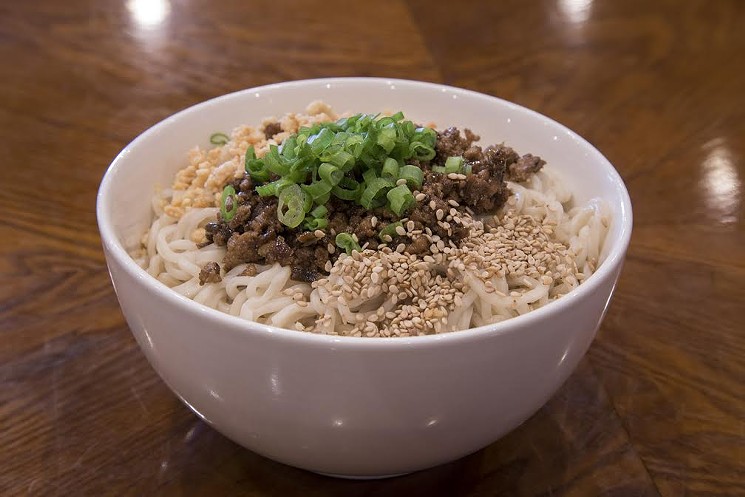 The Sichuan Tan Tan Noodle dish was well-balanced and delicious.
Photo by Troy Fields
The tan tan noodle (dan dan mian) was delicious. Sometimes this dish is presented with a wonderful sauce of minced pork and preserved vegetable of which there never seems to be enough, but Chengdu Taste’s version was harmoniously balanced and the noodle was cooked slightly on the al dente side.

The Chengdu-style fried rice fell short of our expectations. The rice is cooked with the same salty, pickled and finely chopped vegetable that’s found in the tan tan noodle. With egg and green onion as the only other ingredients, the rice fell flat and flavorless. Chinese preserved vegetables are usually, though not always, mustard stem or radish pickled in salt, hot chilies and garlic. Although the rice was fried well, it could have used more of the preserved vegetable in the mix. 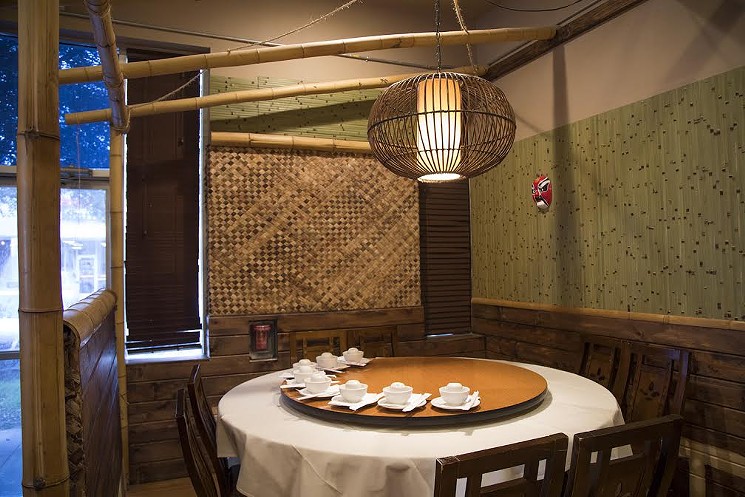 Houston’s Chinatown is only the third location of Chengdu Taste to open in the UnitedStates outside of California.
Photo by Troy Fields
I have said it before in a review of a similar restaurant in town: Sichuan food creates an experience that “diners want to share emotions about.” Chengdu Taste has received several accolades in other markets, but here in Houston, where Sichuan cuisine is not rare and, more important, great Sichuan food is really just around the corner, it’s hard to say who truly reigns supreme.

Kudos to Chengdu Taste for offering authenticity, but each Sichuan restaurant has its winners and honorable mentions. We are already planning the next time we can have the deep-fried chicken with peppercorns and toothpick lamb.