Chainsaw Man: Our Pick For Anime of the Year 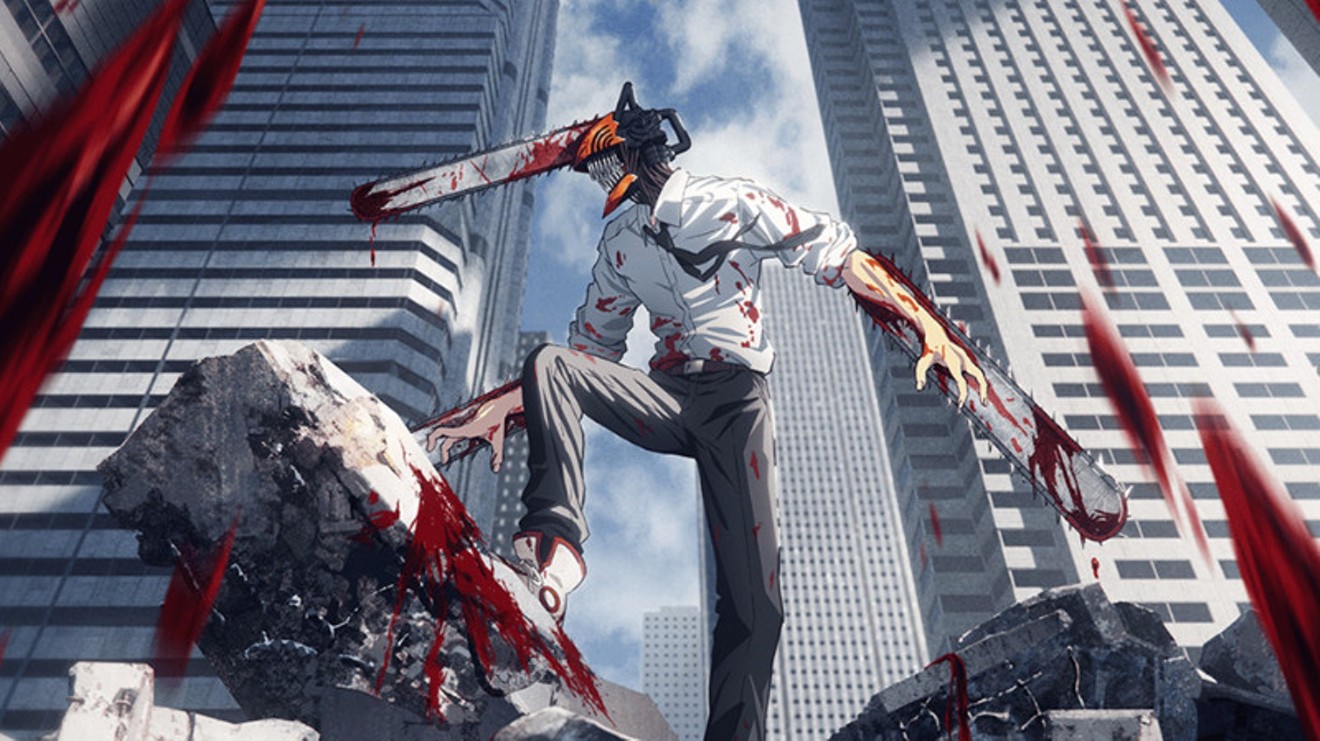 Chainsaw Man, a story rendered with an elegant but gory touch. Screenshot

Denji is a teenager in Japan whose biggest dream is to one day afford some jam to put on his daily slice of bread. He's usedby everyone he encounters, having inherited a large debt to the Yakuza after the death of his father. Denji is forced to hunt and kill low-level devils for the mob to collect their corpses to sell on the black market. Oh yeah, devils are demons that inhabit the world and draw their strength from how much humanity fears them.

His only companion is  the cute little devil Pochita, a dog who has a tiny chainsaw poking out of his head and accompanies him on his kills. Together they kill devils and survive day to day living in a small dank shack. Until the night they are double-crossed by the mob whose members have decided to kill Denji and his dog. Pochita sacrifices himself for Denji who is somehow revived, now with a massive chainsaw head and chainsaws protruding out of his arms.

That — and much more — all took place in the first episode of Chainsaw Man. The anime is an adaption of the extremely popular manga by Tatsuki Fujimoto. The manga was so popular during the pandemic it was nearly impossible to find copies of the volumes in stores. Now through its first 12-episode season, the hype that its trailer generated almost two years ago was justified.

Iconic Japanese animation studio MAPPA pulls no punches in this series. From the jump; Chainsaw Man looks movie quality with sequences, backgrounds, expressions, and movement that look like they cost more than most animated shows' entire runs. Fujimoto is a very cinematic artist and is a big film fan, clearly inspired by western auteurs like Quentin Tarantino, and his passion is represented by the movie reference-heavy opening theme and how well the animation team at MAPPA has adapted his cinematic sensibilities.

Fujimoto also likes to teeter on the line between inappropriate and affecting. For example, Denji’s dream shifts to eventually wanting to kiss a girl, among other goals (like touching breasts for the first time). It’s juvenile, but Denji is someone who never had a life to live and now has three square meals and a place to live as a Public Safety Devil Hunter. He is a simple guy and to honor Pochita's sacrifice, Denji wants to experience life no matter how trivial it might seem to most people.

The things that make the Manga special that have been adapted so well in the anime are the quieter moments. There is an almost two-minute scene where we see Public Safety Devil Hunter Aki’s morning routine. No words spoken, we are shown very meticulously animated sequences of him brushing his teeth, making coffee, sitting out on the patio of his apartment reading the newspaper, smoking a cigarette, then cleaning his apartment and making lunch for his new roommate Denji.

We go on to learn his only goal in life is to one day kill The Gun Devil, whose sudden appearance years ago instantly killed millions of people worldwide, including Aki’s entire family. Everything he does is measured in a way to eventually get him to that goal, no matter the personal cost, and there are some dire costs to pay. The scene is shaken up when a new roommate is dropped off at their door, and Power arrives, solidifying the show's trio.

A common trope in Shonen manga is the trio of main characters, and that's where Chainsaw Man truly shines. There is, of course, Denji and Aki, who reluctantly agrees to supervise Denji because he sees him as valuable in his ultimate goals, and then there is Power. Power is a fiend, a devil who has taken over the dead body of a young woman. Power is the blood devil and roamed the countryside killing wild animals in her primal conquest. Devils innately hate humanity and view them as nothing more than fodder and food. One day she encounters a skinny, malnourished cat that she won't eat because it's too weak and decides to fatten it up and nurse it back to health to ultimately kill it.

During this process, Power realizes that the kitten has become the only thing in the world that it actually cares for, sparking a sense of humanity and a sense of love in the fiend. Power is eventually captured by Public Safety and given a similar deal to Denji, serve and be useful to stay alive. Power is irreverent, speaks in old English, and possesses no manners whatsoever. Put simply, she's a handful and is thrust into the care of Aki, and along with Denji, the three of them begin to form a sort of found family. The trio represents what is the most heartening theme of the story, as they all become more human as they become a family. Which makes what's to come down the line all the more tragic.

The first season has solidified its massive expectations but is truly only the beginning and will surely blow up even more in its second season as the narrative kicks into overdrive. Chainsaw Man is the best anime of the year. It's mature, funny, and emotional. It's action-packed and can be simply read on the surface, but there's so much more going on beneath the blood and gore, and that's what makes it special. It’s the type of series that shows that its medium has a lot more to say and can use what’s come before and tweak and invert it into something wholly new and exciting.
KEEP THE HOUSTON PRESS FREE... Since we started the Houston Press, it has been defined as the free, independent voice of Houston, and we'd like to keep it that way. With local media under siege, it's more important than ever for us to rally support behind funding our local journalism. You can help by participating in our "I Support" program, allowing us to keep offering readers access to our incisive coverage of local news, food and culture with no paywalls.
Make a one-time donation today for as little as $1.