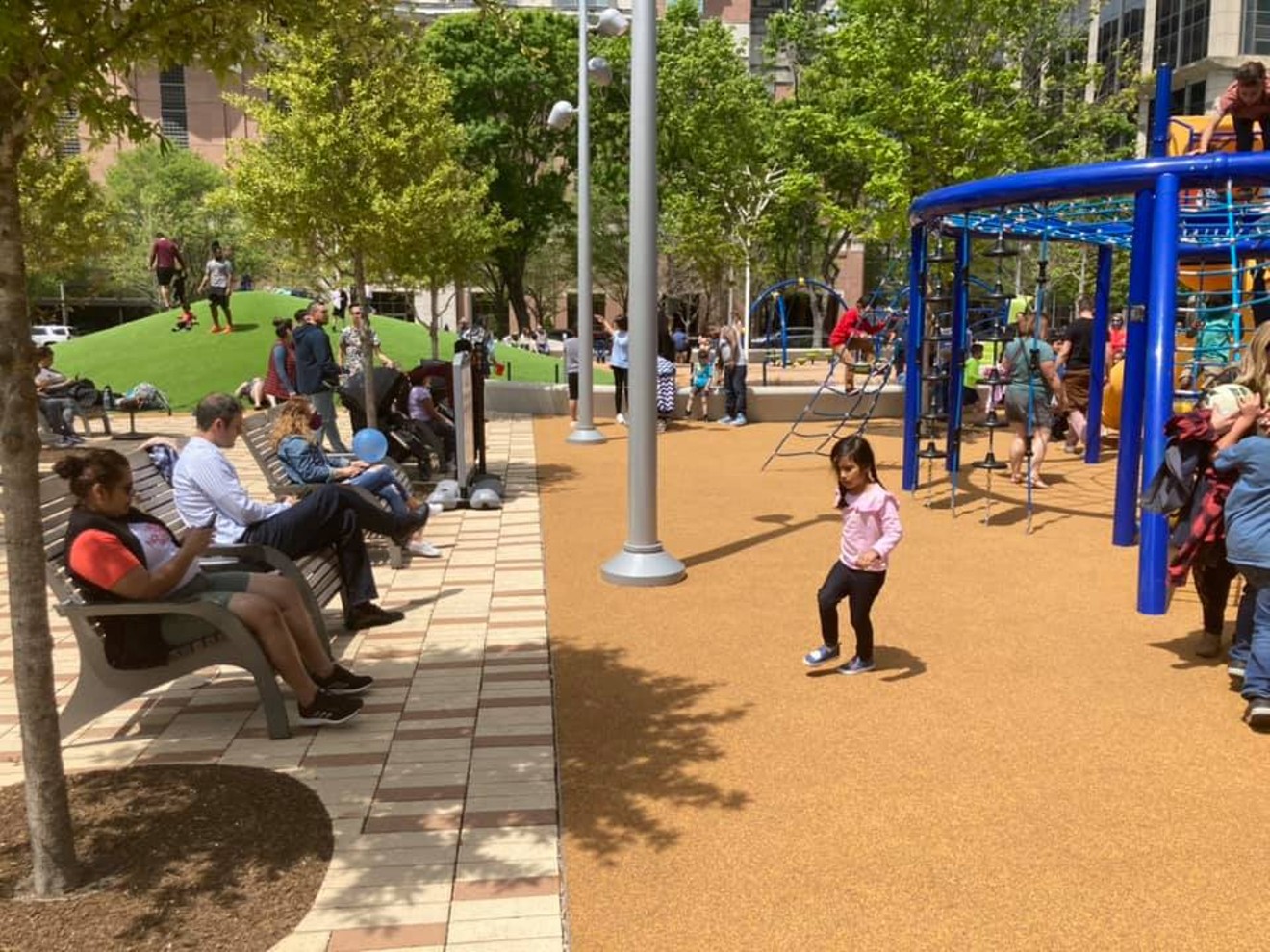 Parents have ample seating to watch their kids. Photo by Jef Rouner

With Spring in full bloom and most of us still confined to outdoor activities despite the lifting of the occupancy restrictions, Discovery Green has just given us a fantastic reason to visit. The John P. McGovern Playground has finally finished its $2.3 million renovations and is open to the public after a year being closed due to COVID.

The previous playground was serviceable, but somewhat cold and dated. When the renovations began in 2019, it was already clear that Houston’s flagship urban park was in dire need of a facelift despite being only 11 years old. Designed by Hargreaves Jones Associates, with consultation by landscape architect Lauren Griffith and Gandy2 Lighting Design and construction by Forney Construction LLC, it’s now something that adds a lot of value to a trip downtown.

As someone who spent about seven years bribing my daughter with playground trips so that I could get some writing done, I’ve explored a lot of the city’s playscapes. While the kid is now too old to means test them on my behalf, I still know a good playground when I see one.

I would rate Discovery Green’s brand-new area as a solid A minus. Conceptually, it’s a climbers’ park rather than a make-believe enabler. The structures are blue steel over a soft landing area to prevent fall damage. It’s almost exclusively rope climbs and spider webs, and has only two slides. There are not really any platforms, which means that kids have to be constantly in motion. Normally, I would ding that as making the playspace as less dynamic, but Discovery Green itself has so many more contemplative and calm down spaces right next to the playground that it makes up for the lack on the ground. Still, it’s a bit weird that there are no treehouses or other hidden segments in the sky for kids to claim as their own.

For the little ones, there is the smaller Mendez Play Space. It features many of the same basic concepts, but much closer to the ground. Like its big brother, it’s an adventure park meant for climbing and balancing. It also has a helpful, low, horseshoe-shaped wall for keeping speedy toddlers from wandering away.

Where the new playground really excels is in parent comfort. Amble lawn chairs and shade from trees make it a great place to park yourself while your kids ran off the bulk of their energy. Even the containment wall in the Mendez part is soft enough to rest on.

There's plenty of space to burn off energy.
Photo by Jef Rouner
Essentially, the new playground is a spot to wind children up and let them go while you take a small breather. Half an hour of braving clambering up and down rope bridges will likely take the edge off their mania so that you can talk them into a nice walk around the green space or maybe lunch at the Phoenician. While I would still rank the new playspace at the Houston Arboretum as the best of the revitalized city playgrounds, Discovery Green is a close second. Coupled with everything else you can do on foot in the area, it’s a nice way to spend a day off. When I dropped by to take pictures on Good Friday, clearly a lot of people thought so, too.

Discovery Green is open daily from 6 a.m. to 11 p.m. The playground is located in the northwest corner at the intersection of La Branch and McKinney. For further information, visit DiscoveryGreen.com. Free, with metered parking.

Dads stand by in case their kids fall, but the ground is padded.
Photo by Jef Rouner
KEEP THE HOUSTON PRESS FREE... Since we started the Houston Press, it has been defined as the free, independent voice of Houston, and we'd like to keep it that way. With local media under siege, it's more important than ever for us to rally support behind funding our local journalism. You can help by participating in our "I Support" program, allowing us to keep offering readers access to our incisive coverage of local news, food and culture with no paywalls.
Make a one-time donation today for as little as $1.