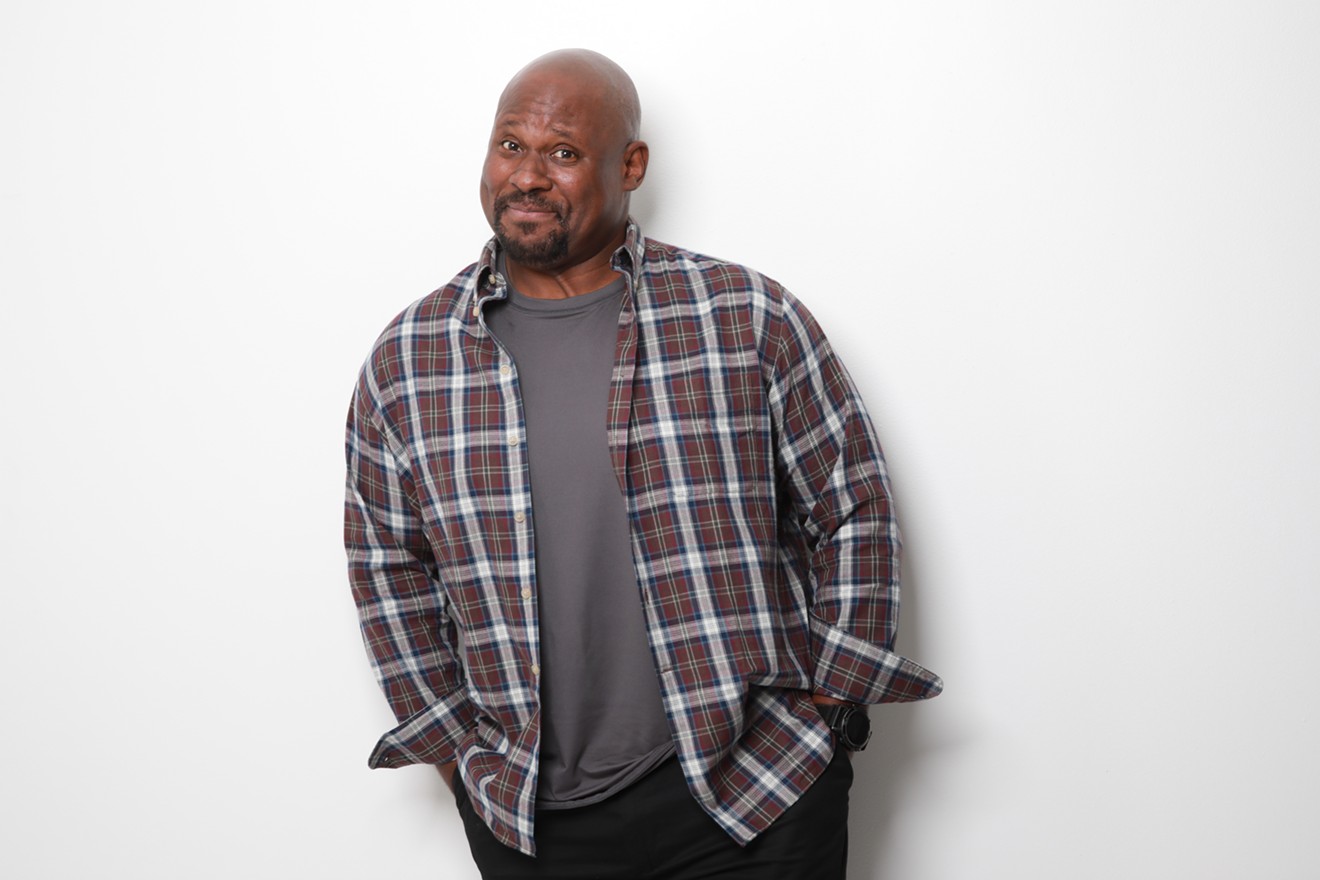 After years of Texas-living on TV, comic Doc Farrow has vowed to get himself some of the real Lone Star State. Frequent devotees of the East Texas-set half hour Young Sheldon may recognize Farrow for his years playing High School Coach Wayne Wilkins, but it’s safe to say that this comic performer has lived quite the adventurous life before his years in Hollywood.

“I was working as, of all things, a drug and alcohol counselor,” says Farrow, who will be dropping by The Riot Comedy Show at Rudyard’s on Thursday. “I was getting my pre-requisites for the nursing program, cause I did medicine in the military. I was a medic [and] a corpsman in the United State Navy. And I’m on vacation, and I’m watching Dave Chappelle and Larry the Cable Guy, and as soon as I finished Larry the Cable Guy’s special, I thought: yeah, I can do that.

"I just changed my courses in college, took an acting class, because I had heard an interview that said if you were going to be a good comedian, you need to be a good actor. And the GI Bill was going to pay for acting school. And I lost my job anyway, so I got on my motorcycle, I had a couple thousand dollars and ended up in Los Angeles. I kinda just fell in love with it, and that’s the skin and short of it.”

While Farrow earns his laughs, he’s not afraid to broach real subjects on stage – and often wring laughter from the thorny social interactions of life. “My story involves military, drugs, alcohol, bad relationships and racism,” Farrow lays out matter-of-factly. “I try my best to put it in a frame that lets you know what I’ve been through, and still how I feel about my life as its evolved so far. I’m grateful I’m even able to show up as a version of myself onstage. I bring the PTSD that I’ve been challenged with since I’ve been out of the military, I bring my thoughts and insights into how I feel about the military and, I’ll phrase it this way: when I started somebody told me to give myself a label. And my label is The Homicidal Teddy Bear.

"I have this wonderful smile, and I’m a really kind hearted person, but I do have these feelings about how I think the world is going to implode. And it’s somewhere in between where I give what I’m angry about with this BIG smile! This is what bothers me, this is what I’ve gone through, and guess what? We’ve still ended up in the same place, on the same night. I get [compared to] this roller coaster that’s gentle and abrupt and excited and then slows it back down until it’s the end of the ride.”

While serving six years in Iraq is far from a laughing matter, Farrow makes his best case that telling jokes is more similar than one might think. “The first couple of years I did stand up, I compared it to carrying a 80-pound pack in Iraq – and I would much rather carry that 80-pound pack in Iraq because it was so scary to me – and still is. It’s the scariest thing I’ve done – and that includes jumping out of an airplane.”

Farrow continues: “I have always been someone — whether it was to disguise my own pain or just watch other people, just for egotistical purposes – I love watching other people laugh. It’s the one thing I can do at a drop of a hat to bring other people or even myself into the present moment.

"What stand-up gives to me is that immediate love because I like to bring people into that moment when nothing else is wrong, and you’re laughing and healing, and relating to someone else who may be going through the same thing. What acting has done for stand up has made me more still, more purposeful in my stand-up.  And once I get up there and get that first laugh out of the way, and get into that good rhythm – then nothing else is scary after that.

"When I do theater, it informs me because theater is much more planned out than stand-up is. And I’m beginning to get much more relaxed when it comes to going in front of camera. It all plays well together. And stand-up takes a certain amount of focus that is sometimes hard for me to pull together. But that’s what stand-up does for me. That energy of people, whether it’s a Thursday night or a Saturday night, people have left their kids and worries at home just to get some kind of levity and laughter. It’s the best medicine.”


While Farrow has made his name working on Young Sheldon, he’s also landed key guest spots on a murder’s row of the best sitcoms on television: Curb Your Enthusiasm, The Good Place, Will & Grace, Mom, Better Things, Modern Family, The Goldbergs and Arrested Development. And the performer’s secret to getting into many of the funniest rooms in the world may surprise with its simplicity.

“What I found is a big factor in casting someone is: do I want to work with someone for 8 hours?” Farrow laughs. “I’ve found I’m really someone who comes alive when I’m on set, and I really enjoy and soak it up. But I get really excited and warm and wonderful, and when I did get the job on Young Sheldon, which is the show I’ve been on for the last four years, it just became more of a family like environment. I mean, I’m not there everyday, I’m averaging like six shows a year. But it’s still like, hey how you doing, how have you been? You get those chances to build up those relationships over time, where those one-days can be rough because you are jumping into those groups that are building that relationship over time. But they do a great job trying to make you feel comfortable for even that one day.”

While clearly Farrow is excited to be playing some dates in Texas, he freely admits that his visit to the state has a bigger motivation than even comedy – as anyone who follows him on Instagram may already be aware.

“It’s actually easier to learn how to sky dive here,” Farrow reveals, commenting on the incredible video of him free-falling taken in early May. “I’m a little heavier than most human beings, and California has kind of a weight restriction between 220 and 240, and I was 320 in October – but now I’m 249, as of this morning. I dropped almost 70 pounds, and part of it was so that I could come and go skydiving in Texas because I have to be under 250.  It was my end of the year goal to get myself skydiving, and I gotta tell you: it’s a completely different experience than I thought it was. It’s priceless to me, it was priceless.”

And while skydiving was a thrill, Farrow teases what’s coming next: “I’m actually an amateur boxer as well, so I got my first fight in July. “