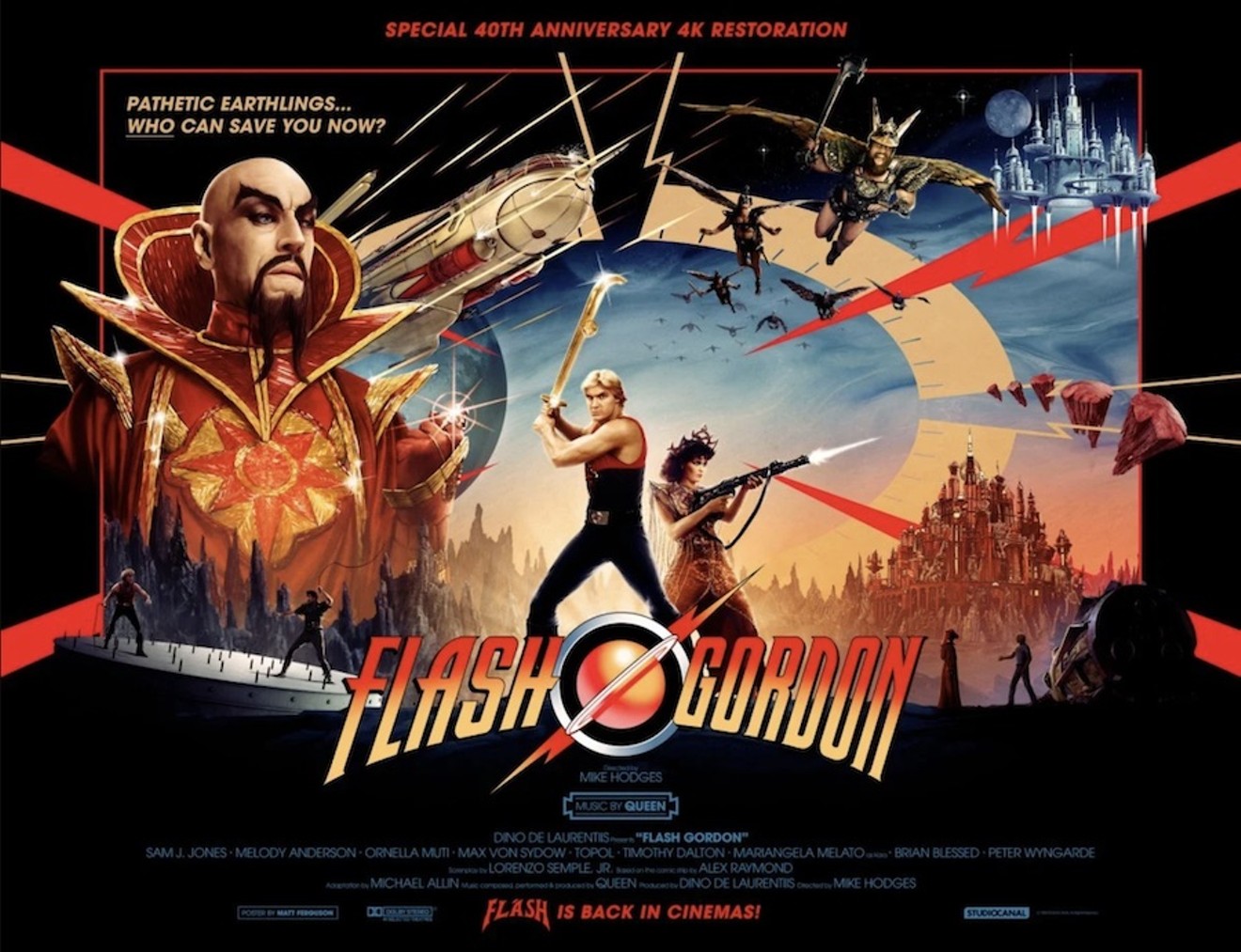 Truly, he saved every one of us. StudioCanal
Who can say what makes a movie great?

The AFI and similar organizations release periodic rankings with the usual suspects (Citizen Kane, Citizen Kane II: The Wrath of Kane), while online contingents continue their campaigns to elevate Megaforce to relevance. The common thread to most of these choices? Scope. Whether we're talking about The Godfather or Lawrence of Arabia or The Seven Samurai, film aficionados really dig their epics.

And what could be more epic than Flash Gordon?

With action spanning galaxies and involving a diverse array of cultures — from hawkmen to forest ... men — Mike Hodges' space fantasy turns 40 this year, and has (finally) received the 4K UHD treatment it deserves. But more on that in a bit.

George Lucas wanted to make Flash Gordon before his inability to secure the rights from Dino De Laurentiis led him to make Star Wars (in that respect, we have DDL to blame for the prequels and Rise of Skywalker). Directors like Federico Fellini and Nicolas Roeg (who worked pre-production for a year) were also involved before Get Carter director Hodges got the nod.

[His next film would be the perhaps too on-the-nose titled Morons From Outer Space, though he would go on to helm A Prayer for the Dying and Croupier. All things considered, he probably got off lightly.]

Flash Gordon was only one of a slew of late '70s/early '80s sci-fi projects produced by studios desperate to sop up some of that sweet, Star Wars gravy. Universal developed Battlestar Galactica and Buck Rogers, Disney released The Black Hole (complete with a couple of trademark adorable robot sidekicks), while Roger Corman directed Battle Beyond the Stars, a Magnificent Seven remake set in outer space and starring John-Boy Walton, a catatonic Robert Vaughan, and Sybil Danning's décolletage.

Flying blind on a rocket cycle?
Universal Pictures
None of those have had the staying power of Flash. Thanks to the overwhelmingly campy approach favored by DDL (and described as "catastrophic" by screenwriter Lorenzo Semple, Jr.), the movie treats the impending demise of the Earth with anything but gravity, thanks to — among other things — translation issues between the English producers and the Italian crew. Catastrophic or not, pseudo-serious meditations on global dictatorship were left to the likes of George Lucas and Glen A. Larson.

In its place ... well, where to begin? Max Von Sydow literally twirling his mustache as Emperor Ming? Timothy Dalton sitting in his trailer and wondering why Eon wasn't calling (probably)? Topol visibly regretting stepping away from the role of Tevye in Fiddler on the Roof (possibly)?

Or maybe Sam Jones and Melody Anderson performing the rare feat of using their debut feature roles to preemptively sabotaging their film careers? In fairness to Jones, he quit production before the movie's release and the bulk of his dialogue was reportedly dubbed by a still-unknown actor.

Flash Gordon really hinges on two great performances besides Von Sydow's: Brian Blessed (Prince Vultan) and Peter Wyngarde (Klytus). Neither actor was very well-known outside the United Kingdom before 1980, and to most people, Flash is probably the one film featuring either actor most Americans have seen (Wyngarde for sure).

Vultan's lines "Gordon's alive?" and "Dive!" have followed Blessed for the rest of his life, and to his credit, his embrace of the material's ridiculousness is something to behold. It's a credit to any actor when you literally can't picture anyone else playing the role, but like Harrison Ford as Indiana Jones, Blessed is Vultan.

DIVE!
Universal Pictures
Klytus, unfettered by a mask that makes him look uncannily like Victor Von Doom, is enjoying himself almost too much. Wyngarde himself was a fascinating individual (he passed in 2018), with a childhood shrouded in mystery (of his own making) and a deeply weird personal life. A star on British TV in the 1970s, Wyngarde's style inspired both the later versions of the X-Men villain Jason "Mastermind" Wyngarde and the character Austin Powers.

Enveloping all this, and the garish costume and production design by Oscar-winner Danilo Donati, is Queen's soundtrack, arguably more famous than the film itself. Flash Gordon was one of the first large-scale feature film to use a rock soundtrack, a fact made even better when you realize De Laurentiis had never heard of the band before.

The bona fides go on and on: Flash Gordon boasted the same DP (Gilbert Taylor) as Dr. Strangelove, Repulsion, Frenzy (and Star Wars)! Writer Lorenzo Semple, Jr. co-wrote The Parallax View and Three Days of the Condor (and wrote Papillon with Dalton Trumbo)! Get Carter was pretty good!

But don't take my word for. The new Arrow Video treatment is a real feast, featuring a new 4K restoration from the original negative, commentaries from Hodges and Blessed (not to be missed), interviews with the cast and Queen's Brian May, who composed the score, the documentary Life After Flash, about Jones' post-savior of the universe career, and so much more. There's enough on two discs for an entire weekend of annoying your spouse. Trust me.

Were there better movies released in 1980? [scans list including Raging Bull, The Gods Must Be Crazy, and The Elephant Man] ... not really. Maybe The Fog. Or Airplane!. The point being, there have been or will be quote-unquote serious 40th anniversary retrospectives written about just about all of these. Don't let Flash Gordon fall through the cracks, and don't Sam Jones' [career] sacrifice be in vain.

"Tell me more about this man Houdini."
Universal Pictures
KEEP THE HOUSTON PRESS FREE... Since we started the Houston Press, it has been defined as the free, independent voice of Houston, and we'd like to keep it that way. With local media under siege, it's more important than ever for us to rally support behind funding our local journalism. You can help by participating in our "I Support" program, allowing us to keep offering readers access to our incisive coverage of local news, food and culture with no paywalls.
Make a one-time donation today for as little as $1.