Seriously, What's With the Ultra-Creepy Halloween Decorations This Year? 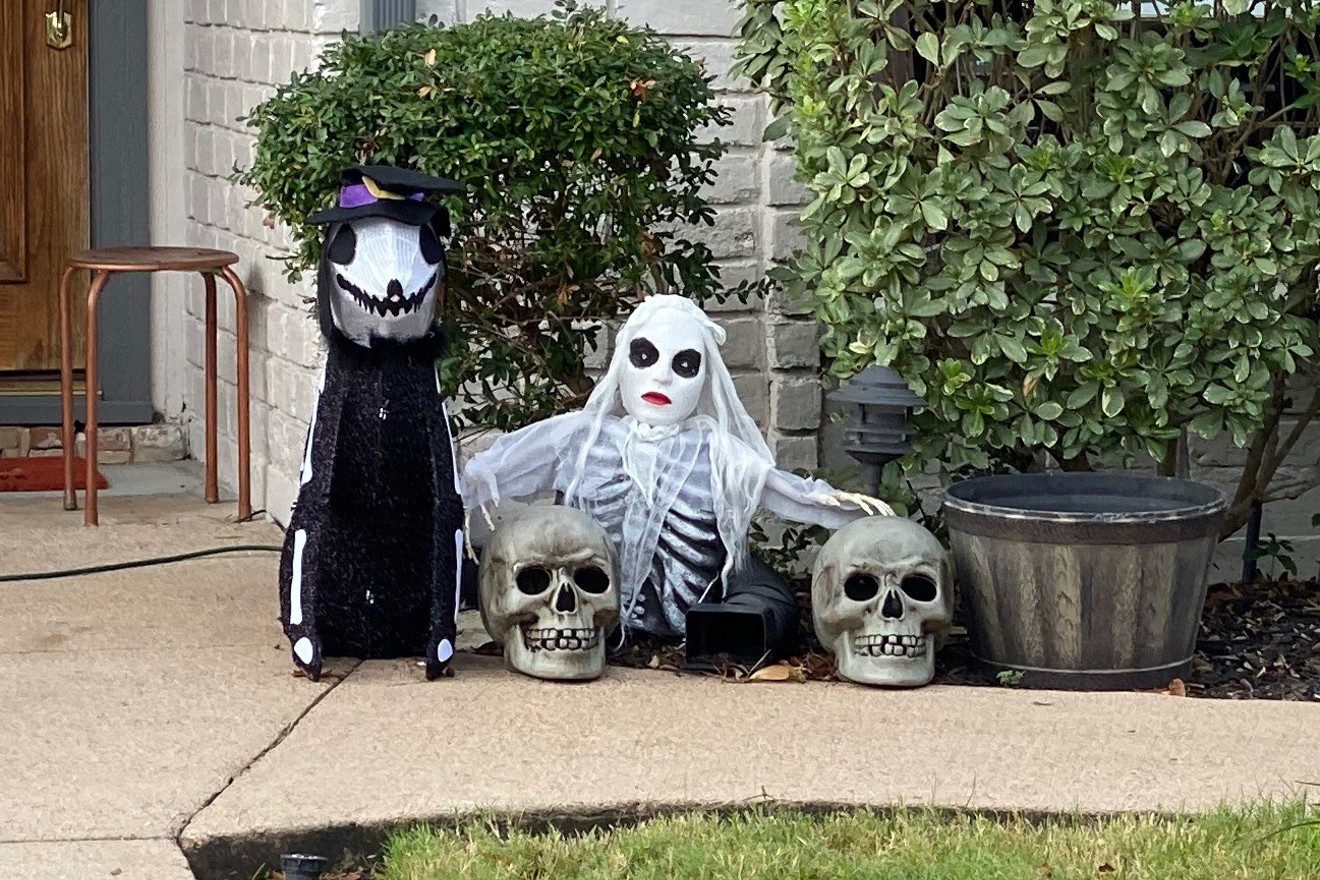 A cute skeleton dog and...um, what? Photo by Jeff Balke
Pumpkins. Candy. Adorable kiddos yelling "Trick or treat!" Neighborhood Halloweens have typically been family affairs with candy and mischief but generally good, clean fun. Sure, the adults may come out later and find their own debauchery, but when it comes to your garden variety trick or treating, it's pretty tame. The best you might get is that one drunk neighbor passed out on his lawn or someone's house covered in toilet paper (though probably not this year given its value relative to the pandemic).

But, this is 2020. Everything is a little...off. And scary. It would appear decor in Houston neighborhoods has, shall we say, adjusted to the changing times. There are still pumpkins and goofy ghosts and signs that say "Boo!" We won't go into the political signs which bring with them their own level of terror. Still, other homes have taken on more, uh, terrifying themes. It's like people have gone from Casper the Friendly Ghost to A Serbian Film (do NOT look it up) in less than a year.

It's hard to blame people with the pandemic, quarantines, the election and racial unrest. But, you guys, what the hell?

The photo at the top is representative of what we mean. There is that cute skeleton dog, ok, but what is up with the creepy torso lady with the goth eye makeup? Why is she just a skeleton torso with a solid white head? Why is she petting the oversized skulls and not the dog? Her eyes are piercing our souls. 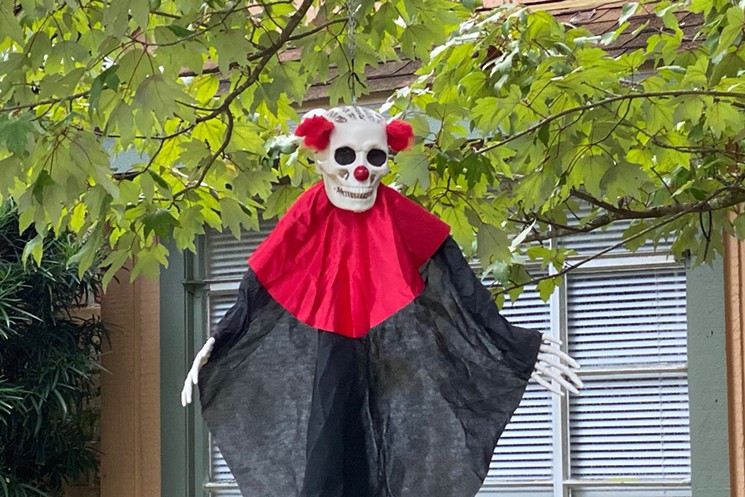 Skeleton, fine. Clown skeleton? No thank you!
Photo by Jeff Balke
Look, we understand that clowns are scary to lots of folks. One of our dear friends is absolutely petrified of them and she loves horror movies. But, when you turn a clown into a skeleton (except for the red nose because WHY?) and hang him from a tree, it's going to be a hard pass from us no matter what candy you are doling out. Aw, the flowers are so pretty...DEAR GOD!
Photo by Jeff Balke

It should be noted that our neighbor who has these bloody stump feet chained to their lovely flower garden also has a MASSIVE hanging clown with razor teeth and typically puts out a coffin on the front lawn the night of Halloween. But even for this house, these feet are creepy and a little confusing. What happened to the rest of this due? Shouldn't you toss out the old chained up feet so you can reuse those cuffs? Just saying. Three witches with no faces just hanging out in the front yard is a no go for us — that and the giant spider web, the skeleton snake posed in a strike position and the life-sized werewolf on the balcony that growls and scare the crap out of our dogs. Then again, if these were the Stygian Witches from Clash of the Titans and if they screamed "A titan against a titan!" we might be on board. So far, no such luck. 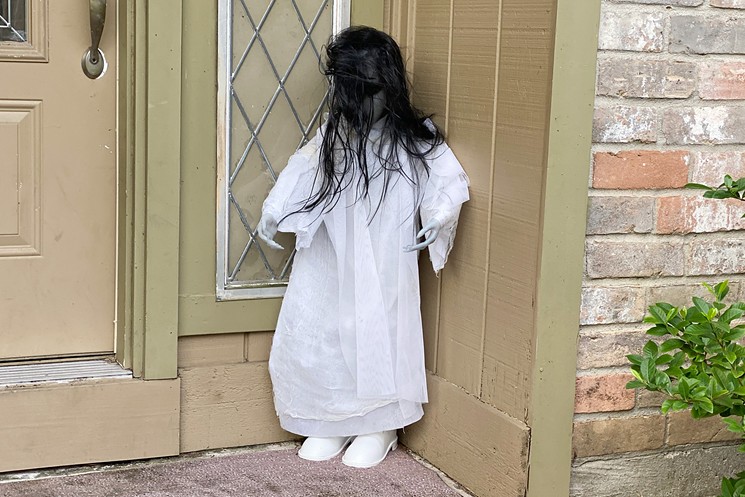 The girl from The Ring has been spotted on a number of lawns this year. That's bad enough. But, here's the problem with this particular house. First, um, uncover the face please. We want to look that little demon spawn in the eye when we traverse this porch for candy. Second, this is the ONLY item of decoration on the entire lawn. That's it. Just this creepy ass girl with her face covered in hair and those long, boney alien fingers. Jesus, man, what are you trying to do, kill us all with heart attacks? And now for the coups de grace of Halloween suburban decorations. We didn't even include the other bloody windows and creepy lady torsos. We didn't need to. This is a door covered in bloody handprints and blocked by assorted blood-stained cutlery. You don't have to worry, neighbor. We might never go through a front door again, let alone yours. You win!
KEEP THE HOUSTON PRESS FREE... Since we started the Houston Press, it has been defined as the free, independent voice of Houston, and we'd like to keep it that way. With local media under siege, it's more important than ever for us to rally support behind funding our local journalism. You can help by participating in our "I Support" program, allowing us to keep offering readers access to our incisive coverage of local news, food and culture with no paywalls.
Make a one-time donation today for as little as $1.