During COVID, Houston’s Influencers Use TikTok to Connect to a Local Audience Kameron Whiteside has gone viral on TikTok as a Gen Z real estate agent in Houston. Photo by Texas Elopement Photography
To the uninitiated, TikTok is a platform for teens to share 30 second dance routines and memes. To the addicted, well, it depends. Are you on DIY TikTok? Straight TikTok? Or maybe your algorithm has stumbled onto Kameron Whiteside’s videos and you’ve found Houston real estate TikTok.

Whiteside, as fitting for a Gen Z real estate agent, sold a house from TikTok last month and has another closing with a client who found him through the platform in a few weeks.

“I’m emailing a person right now actually, about how her 13-year-old daughter found me on TikTok and shows her my videos every day,” said Whiteside, who has over 190,800 followers and 6.2 million likes on his account @htx_casakam.

Remember President Donald Trump’s order demanding that TikTok find a buyer in the United States? The deadline expired this week and even TikTok doesn’t know what’s going on with that. And of course anything can change if a solution hasn’t been found by the time Trump hands over the reins to Joe Biden Jr.

But for the app’s most successful users, TikTok isn’t just a fun app, it’s money and, well, influence.

As social media continues to help people find connection during the pandemic, TikTok has been helping to link Houston's influencers to a local audience. Whiteside and other TikTokers have been finding their feet and putting themselves – and others – on the map.

Some are not sold on the emergence of the thriving local influencer culture. Local star chef Chris Shepherd made his own feelings known early on the pandemic, posting a terse public statement along with a screenshot of an exchange with an anonymized influencer proposing to trade a free sampling in exchange for a social media feature.

“Friendly reminder to not be asking independent restaurants for free food ever, but especially right now,” the statement read. “Restaurants have the tiniest profit margins and are hanging on by a thread right now. Millions of people are without jobs. Millions more are about to be without jobs. This is extremely tone-deaf. Be better.”

Julie Nong, a TikTok user well-versed in social media marketing, said while she sees both sides, the unspoken rule is that influencers shouldn’t propose quid pro quos with restaurants that are more famous than them and therefore don’t need the publicity. However, Nong also sees influencers’ role in the hospitality world as mostly positive, helping people find new places to try and helping businesses get new customers.

“I wouldn’t say I’m a food critic, but I would like to say maybe I’m kind of a digital tour guide,” Nong said. “People outside of Texas don’t know how good Houston food is. I want people to recognize Houston as a destination for food.”

TikTok has a unique format from other kinds of social media in that it doesn’t prioritize content from the people that a user follows. On the main page, the “For You Page,” the platform’s algorithm shows users an endless stream of short videos from any of the app’s other 800 million users that becomes individualized over time (based on what it can tell from your engagement or lack of engagement with certain videos, hence the different “subcultures” of TikTok). In the space of an hour, a user can see 100 videos from users anywhere in the world, from comedy sketches to recipes to yes, real estate listings.

“I saw a real estate video on my FYP and I saw how many views they got, but honestly, the video was trash. That was the inspiration for me. I was like, I could make this so much better,” Whiteside said. “One day, I went to a house that I had listed and I posted a TikTok just to put it out there. And that one's sitting at 1.2 million views. It was a regular suburban house, $215,000, and so many people were [messaging] me about it. I was like okay, this is going to work.”

Of course, most people are more in the market for a yummy snack or a cute new date idea.

Nong was an early adopter of the platform after several years of building up her following as a Houston foodie influencer on Instagram. She now posts videos highlighting “hidden gems,” trendy eateries, and new aesthetically pleasing cafes. When she made her account in late 2019, she made it her goal to get 10,000 followers in her first three months. She easily surpassed that.

“The algorithm is a lot more viral friendly than Instagram’s,” said Nong, who now has over 72,000 followers and two million likes on her account @juliejulez.jpg. “I’ve been on Instagram for a while now and I haven’t even reached 10,000 [followers] there. The growth on TikTok is insane.”

Whiteside and Nong quickly became experts on using the platform as a marketing tool. Both say they did extensive research on what performs well, from video length to optimal posting times. Whiteside said the key is consistency.

“TikTok doesn't blow up any old account,” Whiteside said. “If you're consistent, the algorithm will put you out there because they see you actively trying. On Instagram, you're not making a post on your every day, because honestly your followers don't want to see a post from you everyday. TikTok is different. It has to be consistent, it has to be every day. That’s why people 'fail' when they try to get big on TikTok, they think they can just post willy nilly and it'll blow up.”

At first glance, localized videos seem counterintuitive to the global platform, but with the help of #Houston hashtags and the algorithm’s sensitivity to a user’s interests, these influencers have carved out a successful local niche.

Nong said that when she first started posting on TikTok, she was the only Houston food account.

“The lack of Houston accounts was what made me take it seriously,” Nong said. “I saw a need for Houston representation.”

That recognition has surely surged as more Houston-based food accounts made their way onto the platform, accumulating millions of views and likes. Marissa Ha runs one of those accounts, @htxhotspots, with her husband where they’ve accumulated over 87,000 followers and 1.1 million likes.

“We were just seeing TikTok take off and we figured we better get on it too, because it’s part of the nature of the beast that you have to stay on top of the trends,” Ha said. “It’s a different younger demographic than TikTok, too, so we reach more people.”

Whiteside’s viral success as a real estate TikToker seems even more improbable when you consider that the majority of TikTok’s users are teenagers and younger. Not many 15-year-olds are looking to invest in real estate.

Luckily, TikTok users have an influence of their own — on their parents. Whiteside said the amount of users’ parents reaching out to him has been unexpected, but that even without that bonus, he’s been able to build up a sort of brand recognition for his work.

“In my business, I strive just to put my face and name out there,” Whiteside said. “When you think of buying a house, I want my face or name to be the first thing in your mind. So I’m just putting myself out there for whenever these 15-year-olds are looking for an apartment or a house in five years, I still want them to have me in their heads.”

Nong and Ha have found their own monetary success from the platform. Nong offers social media features for up to $300. Two weeks ago, Ha quit her as a Certified Public Accountant to run the Instagram and TikTok accounts full time.

Both influencers say that a couple businesses contact them every week asking if they’ll come feature their restaurants.

“As my follower count goes up, people message me with more inquiries,” Nong said. “I don’t make a living off TikTok yet, but some places have the budget for it and they ask me what my rates are. Of course, I won’t nickel and dime mom and pop shops.”

The influencers aren’t the only ones profiting off the popularity of TikTok. When the COVID shutdown hit, the Bravery Chef Hall outdoor bar Secret Garden had only been open for a few months and was then forced to close until August. When they were finally able to open back up, customers, mostly workers and residents of the nearby downtown high rises, came trickling back little by little.

“With COVID everything stopped. We got hurt,” Secret Garden’s founding partner and operator Jonathan Gallardo said. “When everything hit, it was very serious, it was crazy for all of us.”

Then Ha featured the bar on their account and the video quickly went viral. Gallardo found out when his niece showed him the TikTok. By then, the video had over 110,000 likes and 620,000 views.

Customers came pouring back in, with many people interested not only in the bar but also the drink Ha had featured, a cocktail original to the bar called the Rose Felici. 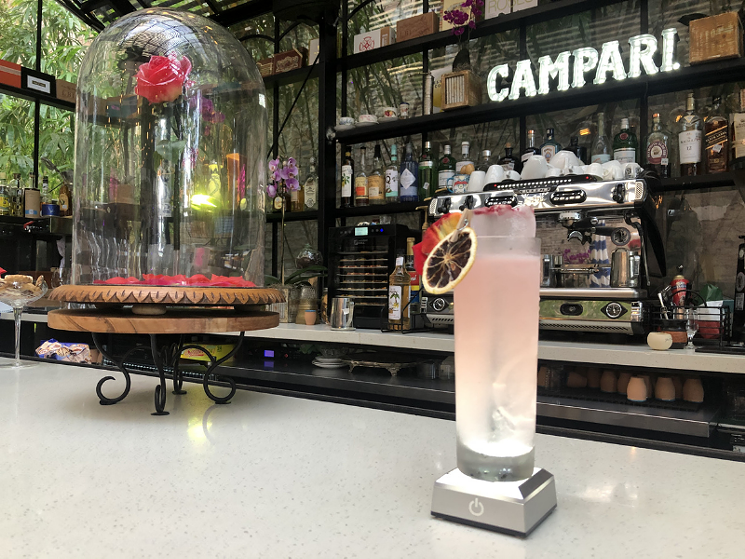 The Rose Felici is the drink that propelled Bravery Chef Hall's bar Secret Garden to TikTok fame.
Photo by Anna Ta
“I was surprised about the impact of the video,” Gallardo said. “We were like having a new clientele. I had multiple customers who would come up and show us the video and say, I want this drink.”

In the age of coronavirus, social media is playing an outsized role in the hospitality industry, helping newer restaurants and bars build interest and clientele.

As these Ha and the others have shown through their influence, TikTok is capable of more than producing viral videos. The platform has served a tool for Houstonians to connect hundreds of thousands of people to restaurants and real estate alike.

Whiteside said that given his success, copycats are soon to be inevitable.

“But I want to be one step ahead of everybody. I’ll want to be onto the next thing by the time they’re moving on to TikTok.”
KEEP THE HOUSTON PRESS FREE... Since we started the Houston Press, it has been defined as the free, independent voice of Houston, and we'd like to keep it that way. With local media under siege, it's more important than ever for us to rally support behind funding our local journalism. You can help by participating in our "I Support" program, allowing us to keep offering readers access to our incisive coverage of local news, food and culture with no paywalls.
Make a one-time donation today for as little as $1.