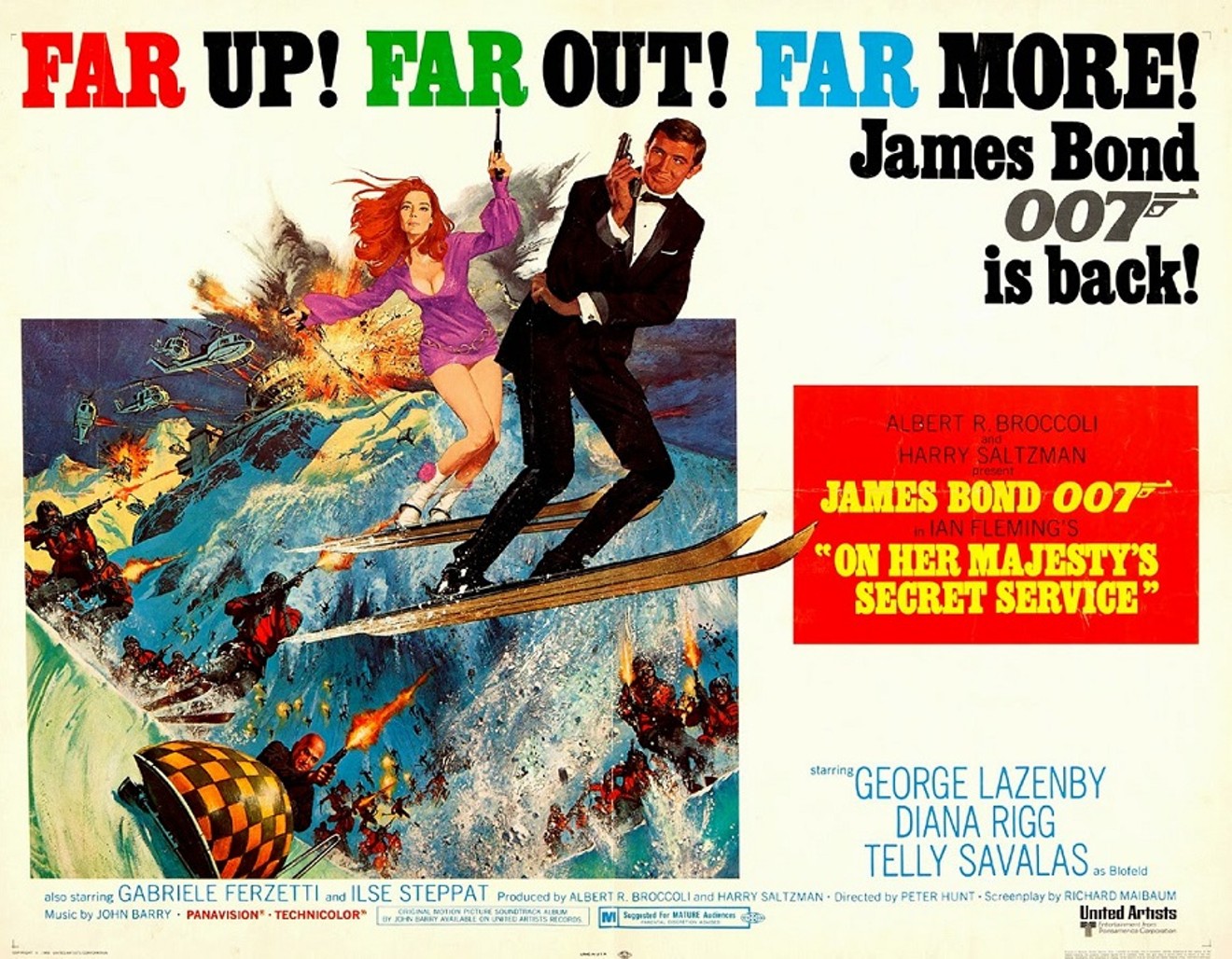 United Artists
We're revisiting the highs and lows of Eon's James Bond movies in the lead-up to No Time to Die. This week, Bond gets married ... briefly.

The first James Bond movie not starting Sean Connery, On Her Majesty's Secret Service desperately wants you to remember it still is a James Bond movie. Instead of an actual song during the opening titles, we get a kind of greatest hits reel of the previous five movies (also, plenty of nipples. Wouldn't want to forget those).

The movie opens with new Bond (George Lazenby) saving someone we'll come to know as Contessa Teresa di Vicenzo (Diana Rigg), or "Tracy" to her future husband. If there's ever any overt mention made of why she was trying to drown herself in the pre-title sequence, I must have missed it. Their courtship starts in earnest in the Casino Estoril, where Bond has to bail Tracy out after she loses at baccarat.

Speaking from my own casino experiences, I don't recommend trying the "I don't have any money" gambit.

What begins as a typical Bond one-night stand evolves after M (Bernard Lee) takes the secret agent off "Operation Bedlam" (MI6's investigation of SPECTRE), who subsequently agrees to romance Tracy if her father, the Italian gangster Draco (Gabriele Ferzetti), helps him track down Blofeld. This in spite of the fact the guy's name is "Draco."

I know what you're thinking: this Draco guy has some radical views on parenthood. But also: romance? Yes, a huge portion of this movie is given over to Bond wooing Tracy as Louis Armstrong's "All the Time in the World" playing in the background. As foreshadowing goes, Tracy might as well have told Bond she was two weeks from retirement. We don't get our first real spy action until over 40 minutes in, when Bond snoops in the office of a Swiss lawyer with ties to Blofeld. 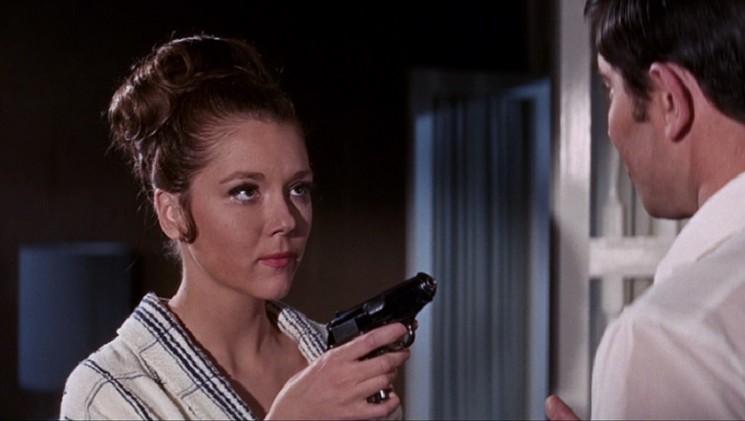 United Artists
As it turns out, Blofeld (Telly Savalas) isn't just interested in [checks notes] training hot babes to release his "Virus Omega" to destroy the world's crops and livestock, but also becoming the "'Count Balthazar de Bleuchamp." Which all leads to a very silly second act where Bond impersonates a genealogist (poorly) to infiltrate Blofeld's mountaintop "allergy center." The time sensitive nature of the case doesn't prevent him from bedding two of the so-called "Angels of Death," at least. Maybe he thought it was an extended bachelor party.

Lazenby's 007 becomes more assured as the film progresses, but is never really at ease in the role. His lack of experience is especially apparent in scenes opposite Rigg and Savalas (whose Blofeld seemingly doesn't recognize Bond, despite having met him in person in You Only Live Twice). And it's easy to argue that Tracy is the best so-called "Bond girl," being 007's equal in fighting, driving, and sabotaging her own life.

OHMSS may also be the first movie we ever see Bond show fear (when not facing laser castration, that is), which happens while he's fleeing SPECTRE henchmen at a winter carnival (in fairness, that polar bear was pretty creepy). His escape from Blofelds lair is some top-notch skiing, however, though I'm not sure which is more hilarious: Telly Savalas as a downhill champion or the Wile E. Coyote-length fall one of his henchman takes off a cliff. I laughed harder at that than the last John Mulaney special.

"I can see the end of my career from here."
United Artists
Anyway, Bond proposes marriage. Tracy accepts. SPECTRE captures Tracy, and M won't sanction a rescue mission, so Bond goes to Draco and together they get her back. And after a sumptuous wedding, Tracy is killed in a drive-by by Blofeld henchperson Irma Bunt (the shot of Blofeld driving in a neck brace is almost as hilarious as the skier falling).

Director Peter Hunt had worked as an editor or second unit director on the previous Bond movies, and convinced the Broccolis to let him take the lead on this one. The quick cuts that were his early trademark take even more of a front seat in OHMSS, not always to great success. The fight scenes — while showcasing Lazenby's hilarious penchant for wild uppercuts — are more invigorating than any since From Russia with Love, and the action is undeniably engaging.

Likewise, John Barry's score is much more forceful this time around. To hear him tell it, this was by design, as everyone was trying to make Connery's absence not so noticeable. Turns out, he needn't have worried. Lazenby's agent convinced him to turn down a seven-film deal on the assumption that secret agents wouldn't fit in with the "liberated" '70s, man. Talk about misreading an industry. And a decade.

As Bond, Lazenby gets horned up easily enough, but lacks the Connery's indifferent cruelty (slapping Tracy notwithstanding). Eon took a big risk making their longest 007 movie to date a love story starring an actor that had never made a movie before, and Lazenby — thanks for the aforementioned bad advice and his own ego — never returned to the role. Connery would make his last (official) appearance as Bond in Diamonds Are Forever, but the horse had left the barn: other people could officially play James Bond.

Stray Bullets:
> M is both A) an admiral in the British Navy, and B) a butterfly aficionado.
> James Bond was apparently the inspiration for Better Off Dead's "he's skiing on one ski."
> Lazenby remains the only 007 to go down on one knee during the opening gun barrel sequence. Connery does this kind of awkward side hop they never bothered to change until Thunderball, Roger Moore is the only one who attempts a proper firing position, adopting a Weaver stance by The Spy Who Loved Me. Pierce Brosnan's is literally laid-back, while Daniel Craig has done a different one each film.

Next Up:
Unfortunately, in light of MGM's decision to push the release of No Time To Die back to November, La Fin Du Bond will be going on hiatus. See you in a few months.
KEEP THE HOUSTON PRESS FREE... Since we started the Houston Press, it has been defined as the free, independent voice of Houston, and we'd like to keep it that way. With local media under siege, it's more important than ever for us to rally support behind funding our local journalism. You can help by participating in our "I Support" program, allowing us to keep offering readers access to our incisive coverage of local news, food and culture with no paywalls.
Make a one-time donation today for as little as $1.