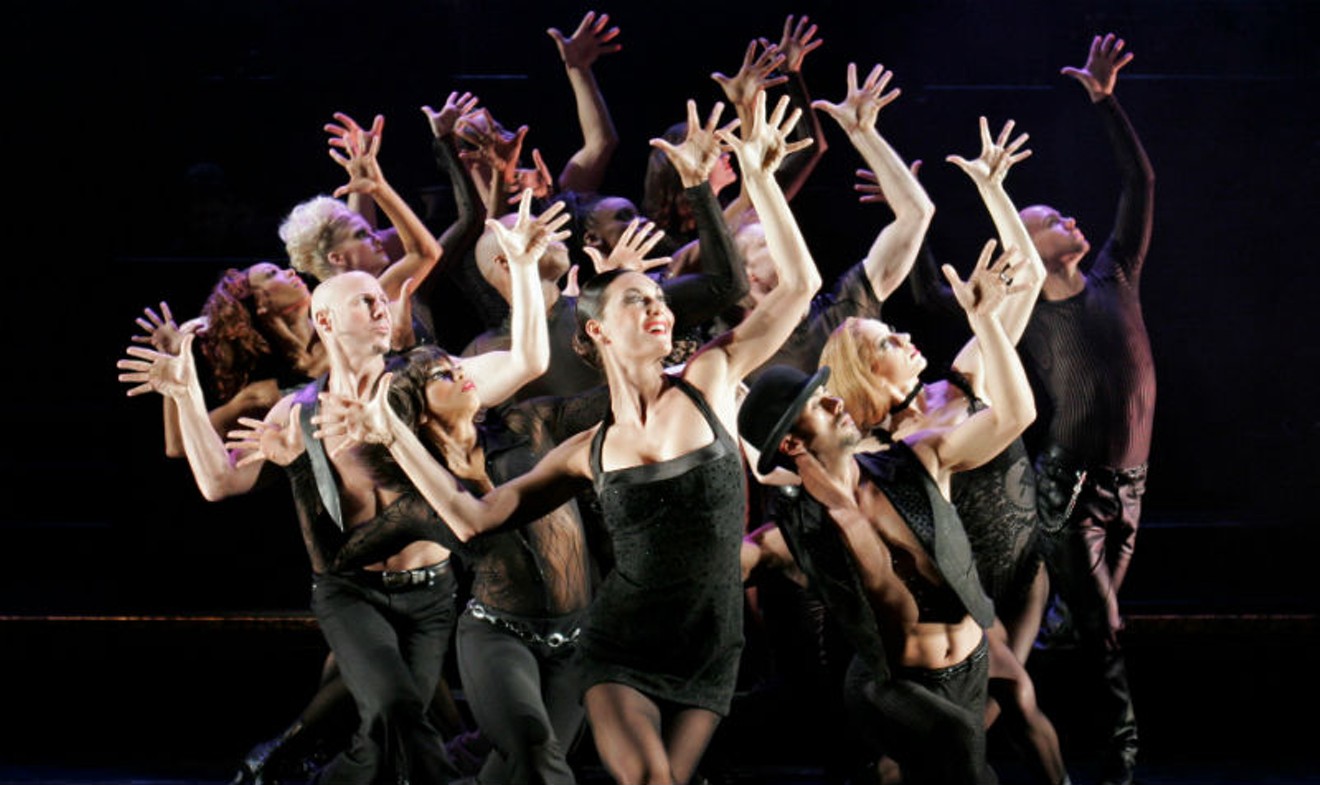 Chicago is definitive Bob Fosse, but we couldn't hear them very well in last night's SPA production. Photo by Paul Kolnik
It had to happen sooner or later. The sound problems that incessantly plague the Hobby Center have now infected Jones Hall.

You might be deaf, but the production you see of Chicago, presented by the Society for the Performing Arts, is definitive Bob Fosse – those bump-and-grind burlesque pelvic thrusts, those arcing hands with curling rubber wrists, the hat brims held crisply with two fingers, the slo-mo gyrations, the undulating legs used like scissors, the sexed-up soft shoe, the menacing chorus, the audacity of the movement.

Unfortunately, we have to hear a show, too. Why did no one in the sound department realize that the onstage orchestra (an integral element in any Chicago staging) was way too loud for the singers? Why weren't the singers projecting? A great swathe of lyricist Fred Ebb's saucy wit was lost in the ether, due to poor technical rehearsal, or maybe a cast that's been on the road since 2017 and no longer cares? Dependent on amplification, can contemporary Broadway Babies even project any more? Obviously, not here. What a shame to see half a show. Especially, a classic like Chicago (1975).

Dripping with cynicism, reveling in it, Fosse's musical vaudeville is one of Broadway's first “concept” musicals. The genre pushed the American musical into unknown territory. There may be a wisp of a plot, but the way it unfolds is the show's reason for being. There's a particular mood to it, an overriding point of view, a great arc of a concept, if you will. Everything relates – story, music, dance, setting – but we're not in normal theater space or time. Fosse's Chicago plants us smack into a show, something resembling a minstrel act from yore, as the characters perform variations on a '20s vaudeville to tell the story. We're in somebody else's mind – Fosse's.

The plot is simple. Married, dumb wannabe showgirl Roxie Hart kills her lover. It's a sensational crime, and the press goes into overdrive. In jail, she meets the latest manufactured darling, Velma Kelly, who shot her lover and sister when she caught them in bed together. Roxie steals Velma's spotlight and the attention of her star attorney Billy Flynn. Playing the fawning press like Horowitz on a Steinway, Roxie is groomed by Flynn, who's happy to defend his client for the appropriate fee. Everybody's on the take. All amoral Roxie wants is fame. Everything else – goodness, compassion, sympathy – stands in her way.

Fosse and Ebb, who co-wrote the book, romp through the idea of untalented people becoming famous by just becoming famous, goosed by a slavish press and the public's insatiable demand for salacious oddity. The show's concept is inky and satiric, terribly prescient for 1975, way before Paris Hilton and any of the Kardashians rose to their dubious fame. Life is a show, Fosse shouts, and “razzle dazzle” is more than enough to get you star billing.

With an arsenal of personal demons gnawing at him, Fosse was an unrepentant misanthrope, and Chicago is his analyst's couch. He put everything he knew about showbiz into it. He skewers the pretense, the hypocrisy, the self-love, but also the absolute joy in performing and putting on a show. Because of Fosse's theatrical prestidigitation, we perversely root for no-good Roxie. We want her to succeed. She an adulterer, murderer, liar, fool, but she also has a dream, doesn't she? We're as complicit as she. What price, happy ending?

Still playing on Broadway, this production, seemingly on the road for eons, is the 1996 City Center Encores! revival, which makes Chicago the second longest-running musical in history, behind Andrew Lloyd Webber's The Phantom of the Opera, which shows no sign of closing, ever. Who says the musical is dead?

This famed revival, directed by Walter Bobbie and choreographed “in the style of Bob Fosse” by Ann Reinking, Fosse's last lover and muse, has been minimized and darkened. Everything's in shades of black. Now set in what could be a gay S&M bar, the hard-working ensemble comprises muscle boys in leather and mesh tops and gals in burlesque fishnet and appropriate decollete. They strut and pose and flex, but surprisingly there's little heat. In wry irony, Fosse's razzle-dazzle has paralyzed them. Their sexiness is sham. It's all faux. This is Fosse's grand concept gone overboard, underwater. The patented moves are there, brilliantly executed by a company who sing and dance with whiplash precision and involvement, but everybody seems on autopilot, going through all the intricate gyrations until they can go back to their hotel.

Maybe I've seen this revival of Chicago too many times. Maybe it's also time for a different interpretation. Obviously, Chicago's going to be around for decades – if it ever closes – and concept musicals are ripe for interpretation, that's what's in their genes. Concepts don't have specifics, they're a state of mind.

The original production was a minstrel show masquerading as '20s Ziegfeld vaudeville. John Kander's music is perfect modernized pastiche: Matron's “When You're Good to Mama,” a Sophie Tucker number replete with raunchy innuendo; Roxie's “Me and My Baby,” with her background trio of hot men, a bouncy Eddie Cantor specialty; hapless Amos's “Mr. Cellophane,” a second-banana Ted Lewis incarnate; Flynn's “All I Care About,” a dazzling “bring on the girls” showstopper with ostrich fans, à la Busby Berkeley. Broadway's potent history weaves through Chicago. Fosse takes all this and makes it his own Möbius strip with mordant humor and a coating of pitch. It's showbiz as life, life as showbiz. Fosse accuses, Where does it stop and where does it begin?

The touring cast is proficient enough, when we can hear them. Most are veteran Chicago performers, either on Broadway or in one of the many national or international tours. Dylis Croman, as Roxie, must have Gwen Verdon, the original Roxie, on speed dial. She has Fosse's snap and pizzazz down to a science, along with Verdon's kewpie doll innocence offset by a Broadway trooper's knowledge in how to play to an audience. She even looks and sounds like Verdon. Lana Gordon's Velma is scorchy hot, but the inconsistent sound dampens her considerable impact. Veteran Paul Vogt, as forgettable Amos, overlays schlubby husband with powerful empathy – we don't forget him. Jennifer Fouché, as Matron “Mama” Morton, prison warden extraordinaire, neatly stops the show with her risque paean to universal tit-for-tat, “When You're Good to Mama.” Houston Oiler Hall-of-Famer Eddie George is surprisingly suave as greasy lawyer Billy Flynn. He can't really sing or dance with any surety – he's second-tier Rex Harrison, singspieling his way through his numbers – but he's up for the challenge. This might have been an off night. We'll cut him some slack.

In the annuls of Broadway, Chicago is an epic. It's the most Fosse of Fosse shows: dank and sexy, sinuously grinding, always on the prowl, enticing with glittery come-ons, wowing with stage pictures and dance moves we haven't seen before. The music and lyrics are extraordinary, some of the best ever. This classic revival, seemingly indestructible, pushes the sex and those ubiquitous “jazz hands” into our face, but somehow refrains from actually engaging us. It doesn't turn us on. What's happened to Fosse? Somebody's turned him into a Puritan, or a tired bus-and-truck show on the road.

Chicago continues through June 9 at 7:30 p.m. Wednesday, Thursday, Friday. 2 p.m. and 7:30 p.m. Saturday. 1 p.m. Sunday at Society for the Performing Arts, Jones Hall, 615 Louisiana. For information, call 713-227-4772 or visit spahouston.org. $35-$95.
KEEP THE HOUSTON PRESS FREE... Since we started the Houston Press, it has been defined as the free, independent voice of Houston, and we'd like to keep it that way. With local media under siege, it's more important than ever for us to rally support behind funding our local journalism. You can help by participating in our "I Support" program, allowing us to keep offering readers access to our incisive coverage of local news, food and culture with no paywalls.
Make a one-time donation today for as little as $1.