Musical Theater Resurrected! For One Performance At Least 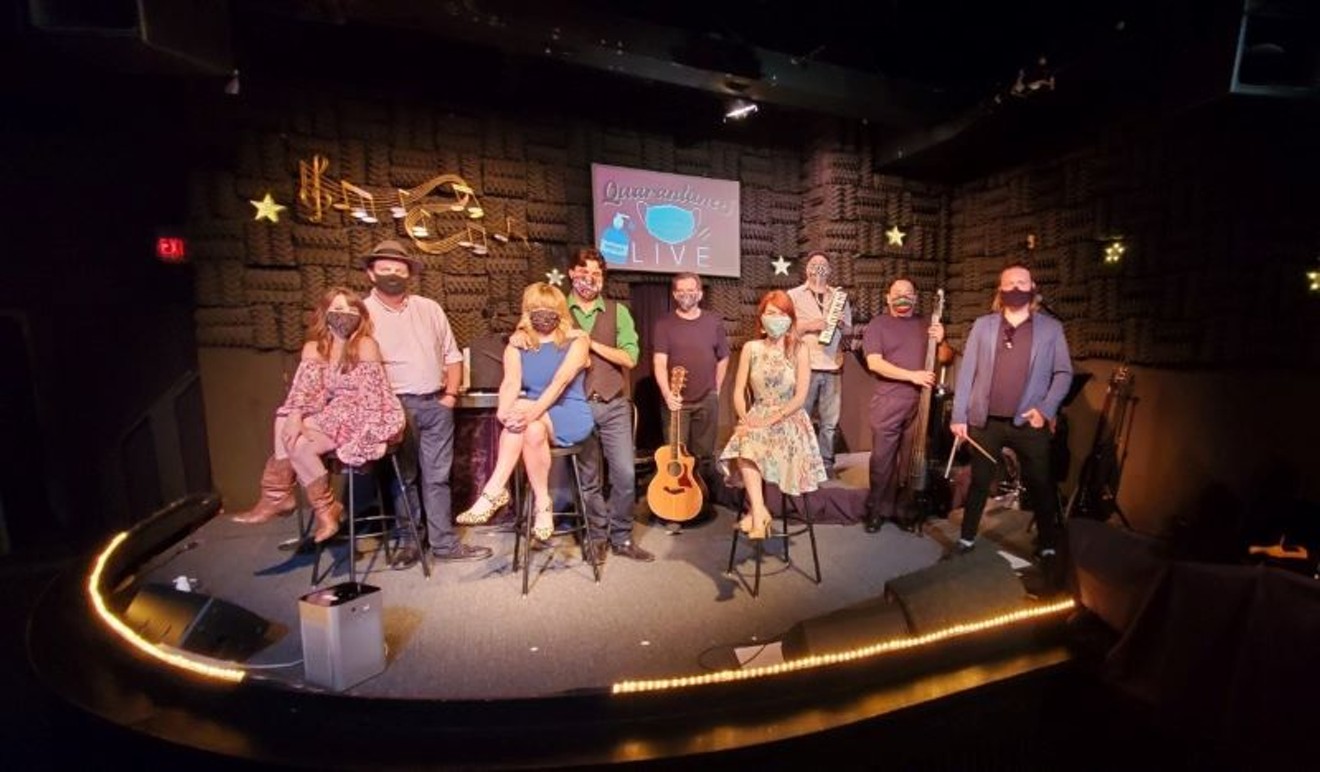 The venue is the intimate cabaret space, The Music Box Theater. It's the size of a shoe box, long and narrow, but the revues produced within are expansive and roof-raising, the current one being no exception.

The Fab 5 performers – Rebekah Dahl, Brad Scarborough, Kristina Sullivan, Luke Wrobel, and Cay Taylor, all Houston musical theater treasures – send off fireworks whenever they perform. A former winner of our Houston Theater Award for Best Cabaret, the shows' themes throughout the company's ten-year existence have been as varied and intriguing as the talented quintet. In the past they've showcased the Beatles during Christmas, Country, Motown, '60s rock, Rhythm & Blues, hit songs from movies, Broadway classics. Each themed show is a certifiable gem, guaranteed to lift you higher. Abetted by the electrifying jazz quartet of Mark McCain (lead guitar), Austin Biel (keyboards and guitar), Long Le (bass guitar), and Arthur Gilligan (percussion), the talent quotient is set at eleven. You feel buoyant when you leave. You, too, want to burst into song.

Following the country-wide lockdown in early March and then quarantine, The Music Box, like almost every theater company in town, produced short musical numbers, posting them on their home page. It kept them in practice, as they sang personal favorites while strumming the guitar or gingerly rocking at the piano. They called these homemade snippets “Quarantunes,” and that's the title of their jaunty new show, Quarantunes Live. The songs all center around love, commitment, the heartache of being detached, the joy of release, the embrace of community.

But like all performers, they ached for the footlights and that siren call of the audience. Performing without feedback into your computer camera casts a depressing pall. So with state restrictions eased somewhat, they took the gamble to reopen. They followed all guidelines of the CDC, rejiggered their small space for social distancing, sanitized every surface, no intermission, disposable barware, and put the band in masks. Temperatures are taken upon arrival, the cocktail tables are placed for maximum distance, and I swear this is the first time I've ever noticed the floor. Usually the little theater is jammed with tables and customers. This time, it's all rather eerie and sparse, yet strangely more intimate. The artists truly are singing just for us – or we lucky 50.

As usual, each member of this ensemble shines uniquely then abruptly joins forces in full-frontal five-part harmony that blows you away. Is there nothing these folks cannot sing? And sing definitively? Once you hear sultry Taylor purr through “Fever,” Peggy Lee doesn't stand a chance. Or when Scarborough's ethereal tenor wraps around the Hollies' “He Ain't Heavy He's My Brother,” you've died and gone to heaven. Dahl explodes Melissa Etheridge's “Come to My Window;” while Sullivan caresses Crystal Gayle's “Brown Eyes Blue.”

We get a musical tour of pop culture, from Cat Stevens, Counting Crows, Jackie DeShannon, Wilson Phillips, Queen, Neil Diamond, a bit of acid funk Jamiroquai, and a loving tribute to England's war-time icon Dame Vera Lynn in “We'll Meet Again.” But wait. The finale is one for the books. Wrobel takes on Joe Cocker in an incandescent xerox of “With a Little Help from My Friends,” with all the others piling on in a jubilant rousing finish that leaves you breathless. That's the way to end a show.

Yet for all their finesse and showbiz know how, Music Box Theater may have lost their incomparable timing. On Friday, June 19 – the opening night of Quarantunes – County Judge Lina Hidalgo, to counter the rise of new cases of Covid-19 in Harris County, issued a new mask edict to take effect Monday, June 22. All business customers and staff, over the age of ten, must wear face coverings. This is fatal news for Music Box. Singing in a surgical mask is futile, to say the least. Whether dispensation will be granted on such short notice is pending. So it is quite possible Quarantunes will join the Alley's 1984 (which closed after its opening night performance, March 6) as a one-off.

And after we had just begun to walk on air.

Due to current restrictions, the remaining performances may be canceled. Contact the box office or TMB's web site for current information.