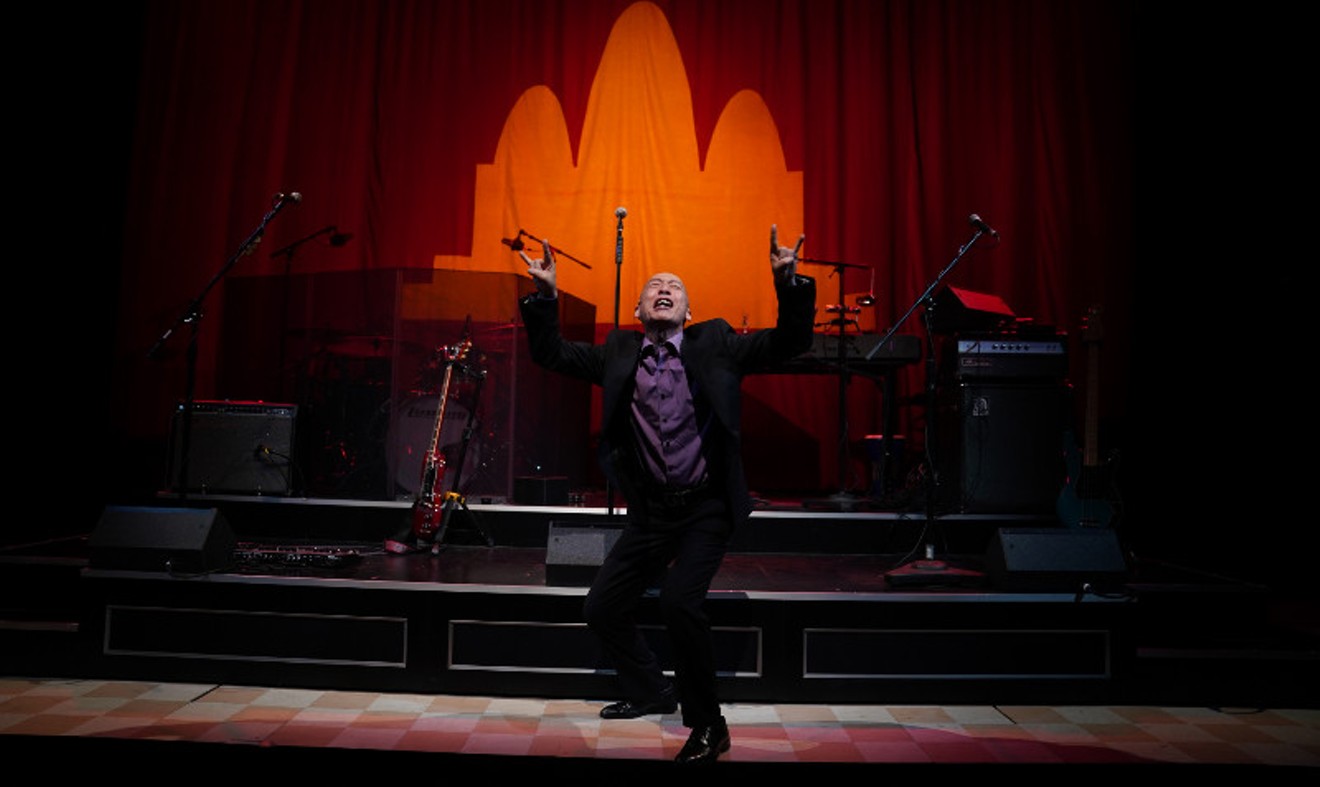 A man who survived the murderous Khmer Rouge returns to Cambodia after 30 years away, surprising his American-born daughter, who has already traveled there to prosecute a case against one of its most noted war criminals.

In Cambodian Rock Band, a mystery/thriller is propelled along by Cambodian music featuring songs by modern day's Dengue Fever band as well as Cambodian oldies of the '60s and '70s. Secrets abound — a family's and a country's — and they are dark ones, revealed as the story jumps back and forth from the mid- to late 1970s to modern times.

Theater/TV/film actor Francis Jue (a Broadway veteran who you may know as the Chinese foreign minister in Madam Secretary) plays Duch, initially a sort of emcee, in this two-act by the much-awarded playwright Lauren Yee (The Great Leap). Although pre-pandemic this rock opera had been performed at theaters throughout the country, this co-production will be the first national tour and it's about to lift off at Alley Theatre.

"I think that the play is often hilarious and often incredibly moving and it's all wrapped up with this fantastic music integrated into the show," he said. "There are some really serious themes in the show but I think one of the gifts that Lauren gives us is the fact that music, that joy, can be a revolutionary act and art and actually remembering the past, documenting the past, can be a progressive act."

Chay Yew (whose theater and opera directing credits stretch across the country) directs the six-member cast, several of whom adopt more than one role. The six also perform as a rock band in what's described as "a darkly funny and electric play with music."  Joe Ngo stars as Chum the father and Geena Quintos as Neary his somewhat estranged attorney daughter.

Jue, who received a Lucille Lortel Award for his performance in Cambodian Rock Band, says he did a couple of very, very early workshop readings when the play was in early drafts. "I just fell in love with this examination of a father-daughter relationship, the secrets and the lies in their relationship which I think a lot of people can relate to whether you're a a parent or a child. "

The other major drawing card, he said, was the story it told about refugees. "The whole idea refugees of immigrants of asylum seekers, the kind of trauma that is inherent even when they don’t pass on information about their escape from their homeland," Jue said.

"I also fell in love with the idea that the play is about artists and how authoritarian regimes when they take over the first thing they go for are the artists. The play explores why. Because arts and artists touch our soul and the music touches our souls, our emotions, our feelings in ways that are rare in our society," he said.

"Every culture has its own music but oftentimes music is shared, is imported, is invited,  is bubbled up from people halfway across the world and why? Because music is human emotions, our humanity is something that we all share.

But to the Khmer Rouge, artists, particularly musicians and the challenges they presented, represented a threat. They were specifically targeted by the Khmer Rouge who ended up killing an estimated 2 million of their own people in an attempt to "purge" their society.

In this play, the relationship between Chum and his daughter is on shaky ground, with secrets and lies, Jue said.

"I'm not a parent but I wonder if I were a parent what would I want my kids to know about me," Jue said. "Because I know when I was a kid, there were things I didn't want to tell my parents. That's something we can all relate to. So how do we actually get to know one another truthfully and honestly and still be there for one another?"

Chum is there, in part to try to persuade his daughter to come home rather than invest herself in what could be years long work in what, after all, were decades-old crimes. He wants to protect her.

As for Duch? Jue said he doesn't want to give away too much about Duch, but did say, "I don’t want to make excuses for my character but I think he’s a great example of what every single one of us is capable of given the right circumstances and that is a cautionary tale.

"It’s really easy to say that the Khmer Rouge which perpetrated horrible atrocities against their own people in an attempt to sort of  'purify' their own country — it was an incredible nationalist movement.  It's really easy to say that they're monsters; they're not like us. What's more difficult to say but what I think is really true is that they are like us. That we have to be constantly vigilant or else we're liable to act on the same impulses that even the Khmer Rouge had," he said.

Jue said he hopes the Southeast Asian community turns out to see Cambodian Rock Band. "Because I think they will recognize a lot in this show. But I also want all of Houston to see this show because while it takes place in this Cambodian family, they will see themselves there, too.

Performances are scheduled for January 20 through February with Opening Night January 25 and previews before that. At 7:30 p.m. Tuesdays through Thursdays and Sundays, 8 p.m. Fridays and Saturdays and 2:30 p.m. Saturdays and Sundays. Alley Theatre, 615 Texas. For more information, call 713-220-5700 or visit alleytheatere.org. $26-$92.
KEEP THE HOUSTON PRESS FREE... Since we started the Houston Press, it has been defined as the free, independent voice of Houston, and we'd like to keep it that way. With local media under siege, it's more important than ever for us to rally support behind funding our local journalism. You can help by participating in our "I Support" program, allowing us to keep offering readers access to our incisive coverage of local news, food and culture with no paywalls.
Make a one-time donation today for as little as $1.