It's the first of three productions — scheduled one right after the other in May and June — that Houston Ballet is presenting to close out its 2021-22 season in power-packed fashion with premieres and audience favorites alike. And it gives the whole complement of Houston Ballet dancers the chance to show off their talents.

"I think that our mixed rep programs are famous for their diversity and their excitement and I think all three ballets are excellent in their own right," Artistic Director Stanton Welch said. "Nothing beats coming to a program with diversity to see different flavors, different music, different dancers in different roles."

"It was actually part of our 50th anniversary celebration. The Jorma Elo ONE|end|ONE and the Hush by Chris Bruce were both works that were created on Houston Ballet. Which I thought is lovely to have works that have gone on to be internationally famous and performed by other companies that were made on our dancers in our city," Welch said. "And Pretty Things is an original, which is Trey McIntyre’s David Bowie ballet.

"The idea of the program was works made on Houston Ballet."

Eleven male dancers will perform McIntyre's Pretty Things, dancing to music that includes Bowie's  "The Man Who Sold the World," "Life on Mars," "Oh! You Pretty Things," "Little Wonder," "Ashes to Ashes," "Ziggy Stardust," "Young Americans" and "Changes." In it, McIntyre, a dancer himself, addresses what he says is narcissism among men in ballet.

"Trey was excited to have such a deep group of talented men and he felt that out of the companies he'd been going to that was hard to find,"  Welch said. McIntyre actually put the ballet together pre-COVID and only now is it receiving its premiere, Welch added.

"Interestingly enough, a lot of the dancers in Houston Ballet had never heard David Bowie," Welch said. "Watching the ballet I was amazed at what a broad range David Bowie had and many of the songs I had heard as covers by other artists and didn't really connect to him. He certainly has had an impact on the music of my generation."

Jorma Elo's ONE|end|ONE will be performed to music by Mozart while famed cellist Yo-Yo Ma and Bobby McFerrin ("Be Happy") will provide the soundtrack for Hush.

Speaking of the latter, Welch said "It's Bobby McFerrin's voice and Yo-Yo Ma's cello. It's all sorts of eclectic pieces of music like "The Flight of the Bumblebee" and "Ave Maria" and they sort of work together to use Bobby's voice and the cello to sound like a full orchestra. And it was made here more than a decade ago and it's a wonderful ballet, a real audience favorite."

ONE|end|ONE was made in Houston about 14 years ago and is very classical, Welch said. "It's a beautiful, classical, very hard ballet to dance." 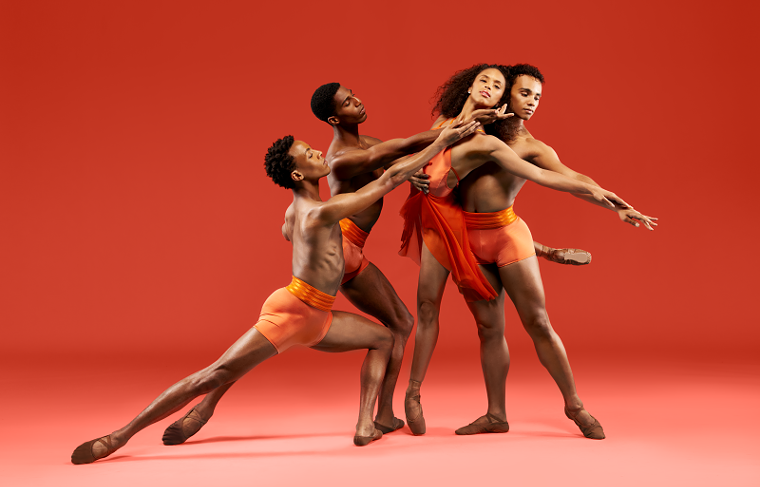 Next up is Originals from June 2-12, starting off with the premiere of  Floreciente, a one-act ballet by Principal Dancer Melody Mennite that among other distinctions, features work from a women-led design team with hand-painted artwork onverted into animated projections. It will be the largest animation project the ballet has ever undertaken. Mennite's ballet is set to the music of Rene Aubry, Ezio Bosso and Max Richter.

And Principal Dancer Connor Walsh will be presenting the world premiere of his A Joyous Triology (in flight). Dallas native Quinn Mason who has composed the music for this will also conduct, making him both the first Black conductor to lead the Houston Ballet Orchestra and — at age 26 — the youngest.

Two ballets by Artistic Director Stanton Welch will complete the program beginning with the ever popular The Young Person’s Guide to the Orchestra. In a first-ever collaboration, artists from the Dance Theatre of Harlem will dance alongside Houston Ballet artists in the presentation of Welch's Orange, part of a series of ballets Welch has created related to colors.

While Houston Ballet has performed excerpts in Houston and the full ballet in New Orleans, seeing it in its entirety will be a first for Houston audiences. On opening night there will be a pre-show Dance Talk with with Dance Theatre of Harlem Artistic Director Virginia Johnson and Houston Ballet great Lauren Anderson. 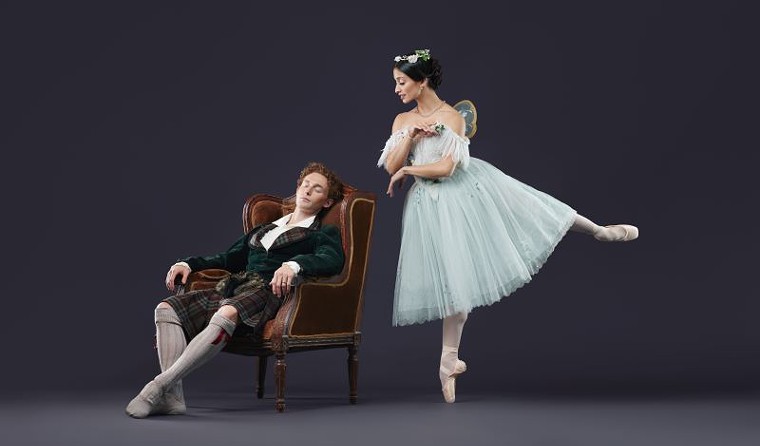 Houston Ballet Principals Karina González as the Sylph and Skylar Campbell as James in August Bournonville’s La Sylphide.
Phot by Claire McAdams
The final offering of the season is August Bournonville’s La Sylphide— known as the oldest romantic ballet still performed today and last performed in Houston 14 seasons ago and scheduled for June 16-26.  It's the story of a Scotsman who abandons his bride-to-be after a female spirit lures him away.

In addition, Welch will premiere his new work Sparrow set to the music of Simon & Garfunkel, including "Cecilia" and "The Only Living Boy in New York."

To enable the company to handle all these ballets in short order, Welch said they adopted a somewhat different rehearsal schedule than usual, one used by some other companies — they rehearse in the first six months and then perform in the second. "We did the same thing in the Harvey year. Which was only a couple years ago so these dancers know that pretty well."

"We want to bring the audience back to see live theater, live dance. First out, the audience responses have been wonderful and the energy between the audience and the dancers is great. We're got a whole lineup of of original works that are premieres.

"We want more connection with the audience, We need to rebuild that memory between a live audience , a live musician and a dancer. It's an amazing feeling and it's something that we can't get enough of."

All performances are scheduled for 7:30 p.m. Thursday, Fridays and Saturdays and 2 p.m. Saturdays and Sundays at the Wortham Center, 501 Texas. For more information, call 713-227-2787 or visit houstonballet.org. $25-$149.
KEEP THE HOUSTON PRESS FREE... Since we started the Houston Press, it has been defined as the free, independent voice of Houston, and we'd like to keep it that way. With local media under siege, it's more important than ever for us to rally support behind funding our local journalism. You can help by participating in our "I Support" program, allowing us to keep offering readers access to our incisive coverage of local news, food and culture with no paywalls.
Make a one-time donation today for as little as $1.