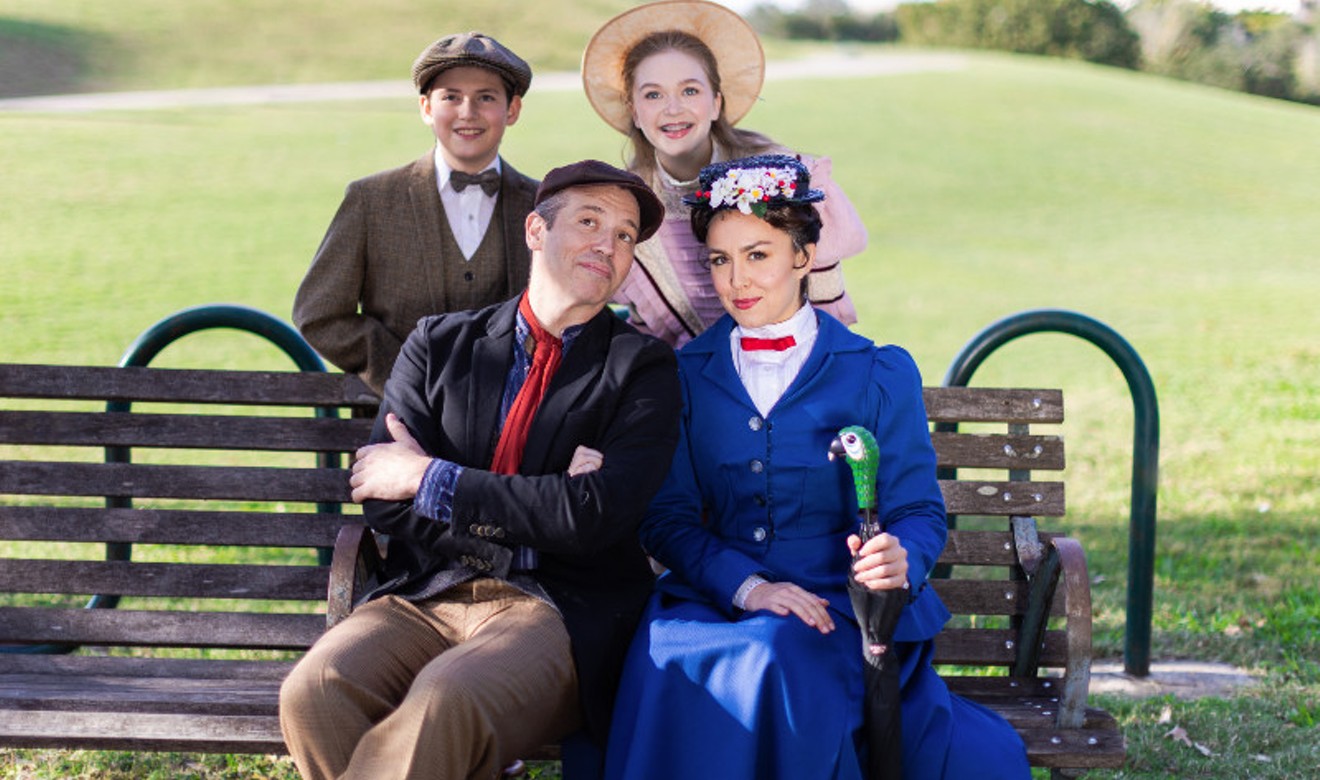 What children and parents would be more than happy to have a Mary Poppins sweep into their lives, tidying up any familial dysfunction, instilling fun and a sense of individual worth, bringing surprises and excitement to daily life — all done with a magic touch and set to memorable music.

At first when musical theater veteran Matt Loehr heard about the Theatre Under the Stars plan to mount Disney's Mary Poppins during the holiday season, he thought, well this isn't the usual Christmas season offering.

But on further reflection he decided it was the perfect time to present a show like this. "It's good for coming together around the holidays and [it's about] being good to each other. And embracing the hope that we can always be better people."

Loehr stars as Bert, the narrator, man of many professions and friend of Mary. In the role, the dancer and choreographer is able to make full use of his dancing skills especially in numbers like "Step in Time." He was in the original Broadway cast of the show when it opened in 2006 as the original Bert understudy. "I got to go on for Bert dozens of times, which was great."

He likes playing Bert because: "He's kind of an extension of myself honestly. He has a ton of different interests, dabbles in a lot of vocations  which just in terms of being a song and dance man and doing different aspects of musical theater I relate to. And he really loves people. He's imaginative; he's creative; he's a kid at heart which is one way he connects so well with Mary and the children. And that's also myself, honestly."

The musical is not a carbon copy of the 1964 film, drawing more from  the children's books by P.L. Travers both are based upon. Some songs have been dropped, others added and the order of the songs has often been changed. George Banks is still a banker but his wife Winifred, a homemaker, is no longer a suffragette but a former actress. (Alas, the song "Sister Suffragette" has been deleted along with the backstory change.)

Directed by Julie Kramer who last directed A Chorus Line at TUTS in 2019 and choreographed by Jessica Hartman who directed and choreographed Rock of Ages in 2021, the story, of course, begins with the problematic Banks children —  Jane and Michael — who have successfully run off one nanny after another. The parents start the search for a new one and Mary Poppins magically appears.

Right upon her arrival, Mary begins sorting out the children and parents alike. In a version of tough love, she leaves the residence for a while but drops back in, unfurled umbrella in uplifted arm, before completing her mission by transforming the family dynamics and leaving to go work her magic elsewhere.

Loehr as Bert will be speaking in a lower class cockney accent and although he has nothing but praise for Dick Van Dyke's acting career, he's being careful to avoid the much-maligned accent that Van Dyke adopted for the role in the movie. In the original Broadway production, Loehr says he was fortunate enough to have "a terrific dialect coach and it still feels really engrained in me."

He had equal praise for the TUTS costume department with its experienced staff who built costumes specifically for this production. "They just understand from the get-go the certain things you need in order to be able to move and dance. These numbers in the show are really big. They're really meant to be quite expressive in scenes of joy and expressiveness and dance plays a huge part in that."

To be able to sing while moving and dancing demands a high level of conditioning he says. "Just the technical aspects of breathing while dancing and singing and still get the voice out. You have to be loose enough to be able to breathe and support for your voice but still have enough muscular tension to get those moves out."

And he adds,  "I haven't done a dance role like this since three years before [because of] COVID."

Why should people buy tickets? "It's a big, fabulous family-friendly musical and you kind of get a little bit of everything," Loehr says. "You have these iconic songs from the movie. They're just brilliant; they're so catchy and they're forever timeless and then you have these added songs that really partner well with the pre-existing songs.

"There's nothing like seeing live theater magic on stage. It's colorful costumes, big set, but at the center of it is this really big heart about this family that they've all lost their way and Mary Poppins helps them come back together again. And who doesn't like that?"

Performances are scheduled for December 6-24 at 7:30 p.m. Tuesdays through Fridays and Sundays, 8 p.m. Fridays and Saturdays and 2 p.m. Saturdays and Sundays at the Hobby Center, 800 Bagby. For more information, call 713-558-8887 or visit tuts.com. $40-$145.
KEEP THE HOUSTON PRESS FREE... Since we started the Houston Press, it has been defined as the free, independent voice of Houston, and we'd like to keep it that way. With local media under siege, it's more important than ever for us to rally support behind funding our local journalism. You can help by participating in our "I Support" program, allowing us to keep offering readers access to our incisive coverage of local news, food and culture with no paywalls.
Make a one-time donation today for as little as $1.