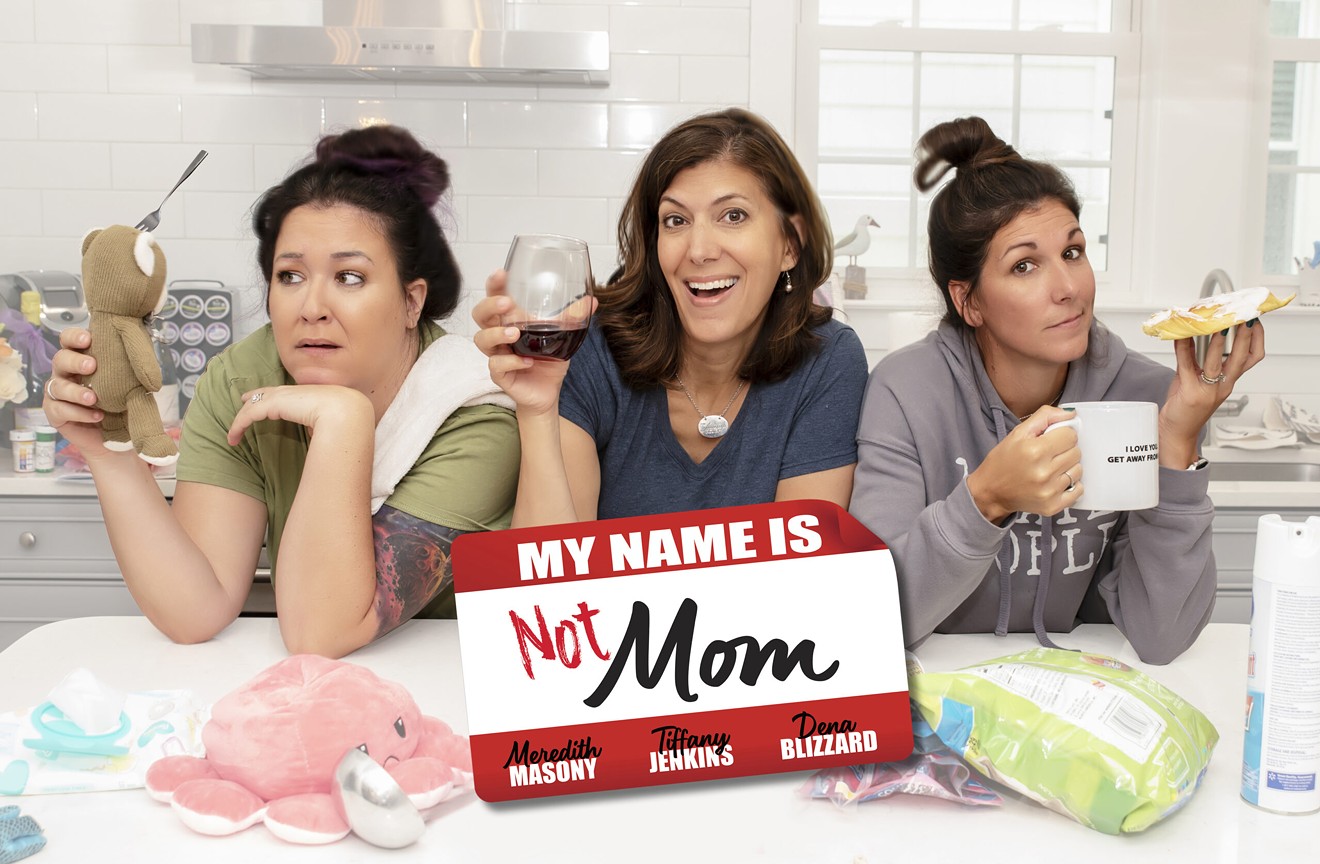 Separated by region, brought together by laughs - the "Not Moms" are bringing their online personas to the Houston stage. Photo by Jeffrey Vincent Photography

Needless to say, the pandemic has been frustrating. But more than few comedians found a way to turn a bad situation into a chance to try new ways to connect to audiences. It was social media that helped Tiffany Jenkins, Dena Blizzard and Meredith Masony connect, and despite living in different parts of the country – they decided they might be a great team.

“We had all three had a relationship prior to the show because we all do comedy online,” explains Tiffany Jenkins, a content creator with more than 7 million followers across platforms. “And Meredith had the realization that each of us has children at different ages and stages. She thought how it cool it would be to get everyone together so we could take a live audience on the journey through motherhood through the eyes of a mom at each different stage: I have young kids in elementary school, Meredith has kids in middle school and Denna has older kids going off to college.”

Thus, the My Name Is Not Mom tour was born, and on September 9 and 10, the hybrid blend of stand-up, storytelling and improvised audience interactions will be appearing at the Wortham Center’s Cullen Theater presented by Performing Arts Houston.

“We started working on this when we were very deep in the pandemic,” says Dena Blizzard, a playwright and comic who previously appeared Off-Broadway in One Funny Mother. “I think we all started to interact a lot more with our audiences, due to the pandemic and going live [on Facebook]. But we still didn’t have that feedback that you would get with a live show. So when we started working on it, we were coming out of the pandemic; we thought there were tons of people who were eager to get out to do anything. It just meant a lot to us get out to interact with the people that got us through the pandemic.”

The idea of the mom itself will under the microscope, according to Meredith Masony who would not describe herself as a “fun mom.”

“I think the three of us really do a great job at speaking our minds and taking the stigma away that you gave birth and had this lobotomy,” she says with a laugh. “That’s not what happens when you become a mom, you’re still a person. We talk about the real side of it, the side that is not Instagram ready. I think that’s why people related – they watch our videos or join in our lives and think this is not just happening in my house. It’s not just my kids.”

Almost to prove a point, after each “Not Mom” gets their own time to showcase their stand-up material, they intend to turn the show over partially to the audience with an improv-heavy section dedicated to the moms in the audience. “We get to talk to people in the audience and even bring them up on stage,” Blizzard says. “A lot of the times, even we don’t know what is going to happen and is a nice surprise to see what kind of kooky people we can meet on the road.”

Jenkins adds, “I don’t want to give too much of it away, but we ask the audience to submit photos throughout the show and near the end of the show we take those photos and do something special with them.”


As the newest mother of the group, Jenkins’ road to success has not always been the smoothest – overcoming mental health challenges and addiction before finding her voice.

“I think that’s where my comedy originated from, I used it as a deflecting tool to keep people distracted with the comedy so they couldn’t see all the stuff that was going on with me. As I got older, I was able to get a better grasp on what was going on. It turns out I had really severe anxiety and we just didn’t have a word for it when I was little. As I got older I learned it wasn’t normal. I was self medicating for a long time, trying to just feel nothing. That sent me into a really long spiral of addiction for about ten years and that ultimately almost took me out.

"I was in all kinds of legal troubles and I was at the bottom so there was nowhere else to go. So I attended a rehab, and I started learning about my brain and why I was doing the things I was doing. I was able to learn how to live a normal life without the use of drugs. Once I saw that a life after addiction is possible, I thought anything was possible. So I started pursing my dreams and here I am, living a life greater than I could ever imagined.”

Often it seems motherhood is what keeps Jenkins grounded, but there are times that the stress of raising her family admittedly takes a toll. “I got pregnant when I was still living in a halfway house. I had nothing to my name at the time, and I didn’t know what was going to happen except for the little life that was growing inside of me kind of fueled me to stay on the right track I was already on.

"Then once I started having children, the daily stresses are overwhelming and I can’t turn to wine or to alcohol to de-stress, so luckily I’ve learned some other tools to take the place of those things. It is hard, of course. Having kids sometimes makes you want to drink, but I know that me being the person that I am if I were to choose to drink, I wouldn’t able to be present for my kids. Everyday I wake up sober and present is a true gift.”

While their collaboration has been a fruitful one, after this leg of the tour, will these funny women still find a way to share a marquee in the future? Blizzard is open to all possibilities. “It’s been a year and a half process. It doesn’t seem that long because it was so deep in the pandemic, with three to four months developing the show. But as you would expect, doing a show with three kids and each of us trying to balance all that – it’s had its share of challenges, but it’s so rewarding to bring the show to people. So we’ll kind of go back to our corners of world and see what’s next for each of us.

"Maybe in the long run, I’m a funny grandma, Mer and Tiff have kids graduating college, who knows? I think that’s the great thing is there are always funny stories to tell.”