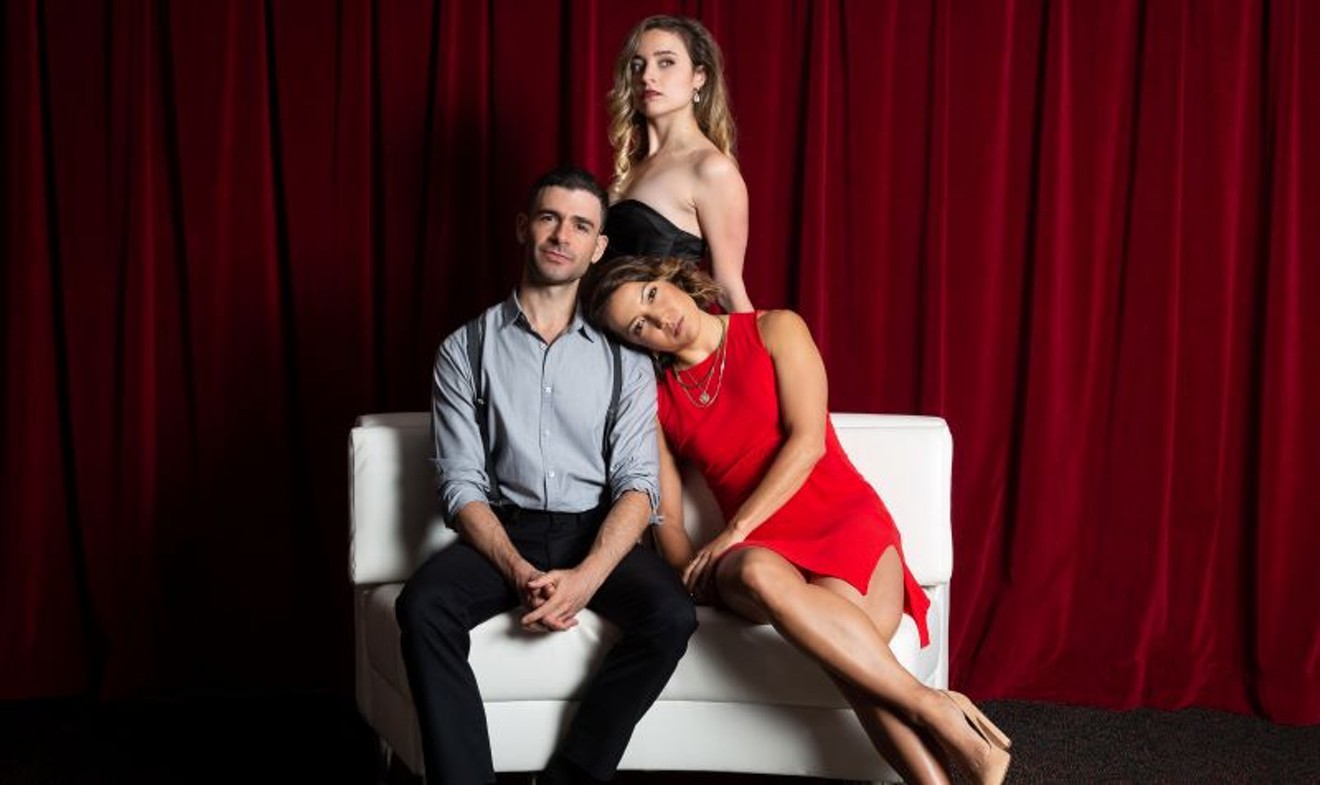 Adam Kantor as The Neighbor, Christy Altomare as Scarlet, and Morgan Marcell as The Wife in Alley Theatre’s production of Noir. Photo by Lynn Lane

Disappointed in love, a man sits alone, listening to music and brooding. [Been there, done that.]

A couple moves in next door and his initial interest in their doings moves into obsession. [OK, maybe not so much.]

What follows, we're told, are all sorts of unexpected developments as the creators of Noir aided by a blue ribbon cast and crew hope to produce the sort of musical theater magic that not only is a smash hit at the Alley Theatre where it's about to open but goes on to Broadway fame and fortune.

"There’s only seven people in the cast. Every single one of us is so talented, everyone is a triple threat, everyone is singing, dancing, acting. Nobody can hide. We’re all doing it all," says Christy Altomare (Broadway: Anastasia, Mamma Mia!) who performs one of the lead roles as Scarlet.

With a title that indicates not all will be sweetness and light — but then again, shows like Sweeny Todd and Little Shop of Horrors demonstrate that musicals with darker elements can succeed with audiences and critics alike — Noir has music by Duncan Sheik (Spring Awakening), book by Kyle Jarrow (The SpongeBob Musical) and lyrics by Jarrow and Sheik. Darko Tresnjak (A Gentleman’s Guide to Love and Murder) directs.

"What I love about Darko as a director is that he really does his research and he has a passion for this style. He’s seen almost every single noir movie that there is and has done so much research on noir," Altomare says. "If you're somebody who appreciates noir there are so many Easter eggs and hints and homages from other classic noir movies and noir art."

The season finale is an ambitious undertaking by the Alley and other cast members include Adam Kantor (Broadway: The Band’s Visit, Fiddler on the Roof) as The Neighbor and Morgan Marcell (Broadway: Hamilton, Moulin Rouge!, Bandstand) as The Wife. Also, Sinclair Daniel (Shakespeare Theatre Company: Peter Pan and Wendy) as The Kid, David Guzman (Broadway: Hamilton, Disney’s Newsies) as The Husband, Clifton Samuels (Broadway: Follies, Amazing Grace) as The Boss, and Voltaire Wade-Greene (Broadway: Hamilton) as The Goon.

Altomare treads very carefully when asked to describe her character and what happens in the two-act musical. "Without giving too much away, this show has a lot of twists and turns. My character is essentially a nightclub singer/performer who takes pills and has an affair with the neighbor who is kind of the narrator. The whole story revolves around the neighbor. The message of the show is about loss and dealing with loss. The neighbor is essentially trying to get over this affair and he loves Scarlet deeply."

She promises that the music is memorable, referring to Sheik's "earworm melodies" and calls the choreography by Karla Puno Garcia "unbelievable.

Altomare had worked with Tresnjak before on Anastasia. She also did the first national tour of Spring Awakening which was Sheik's music.  "It just was a perfect colliding of coincidences  that the role was right. I still had to go in and audition and do my best and be approved by the team. But there's no secret that I have a love for the entire creative team many of which are members of the Anastasia creative team."

She says from a young age she was always one of those kids who wanted to perform and fortunately, she says, her parents supported her in that effort. She attended the University of Cincinnati College-Conservatory of Music and as part of that prestigious program appeared in a showcase where she sang "Mama Who Bore Me" from Spring Awakening.

"The casting director [for the Spring Awakening national tour]  was in the audience and that's how I got my first job which was the first national tour of Spring Awakening. It's not as simple as it sounds. I had to audition about eight more times. But I was lucky enough to book the lead character. So yes, that is what happened but I did have to fight for it," she says laughing.

Asked what it means to her to be part of creating a brand new  work, Altomare says: "I think this is every actor’s dream, any creator's dream, is to do something and take it to the fullest highest extent of that craft.

"We're pouring our whole hearts into this production."

Performances are scheduled for June 2 (Opening night is June 9) through July 3 at 7:30 p.m. Tuesdays through Thursdays and   Sundays, 8 p.m. Fridays and Saturdays and 2:30 o.m. Saturdays and Sundays at Alley Theatre, 615 Texas. For more information, call  713-220-5700 or visit alleytheatre.org. $28-$71.
KEEP THE HOUSTON PRESS FREE... Since we started the Houston Press, it has been defined as the free, independent voice of Houston, and we'd like to keep it that way. With local media under siege, it's more important than ever for us to rally support behind funding our local journalism. You can help by participating in our "I Support" program, allowing us to keep offering readers access to our incisive coverage of local news, food and culture with no paywalls.
Make a one-time donation today for as little as $1.