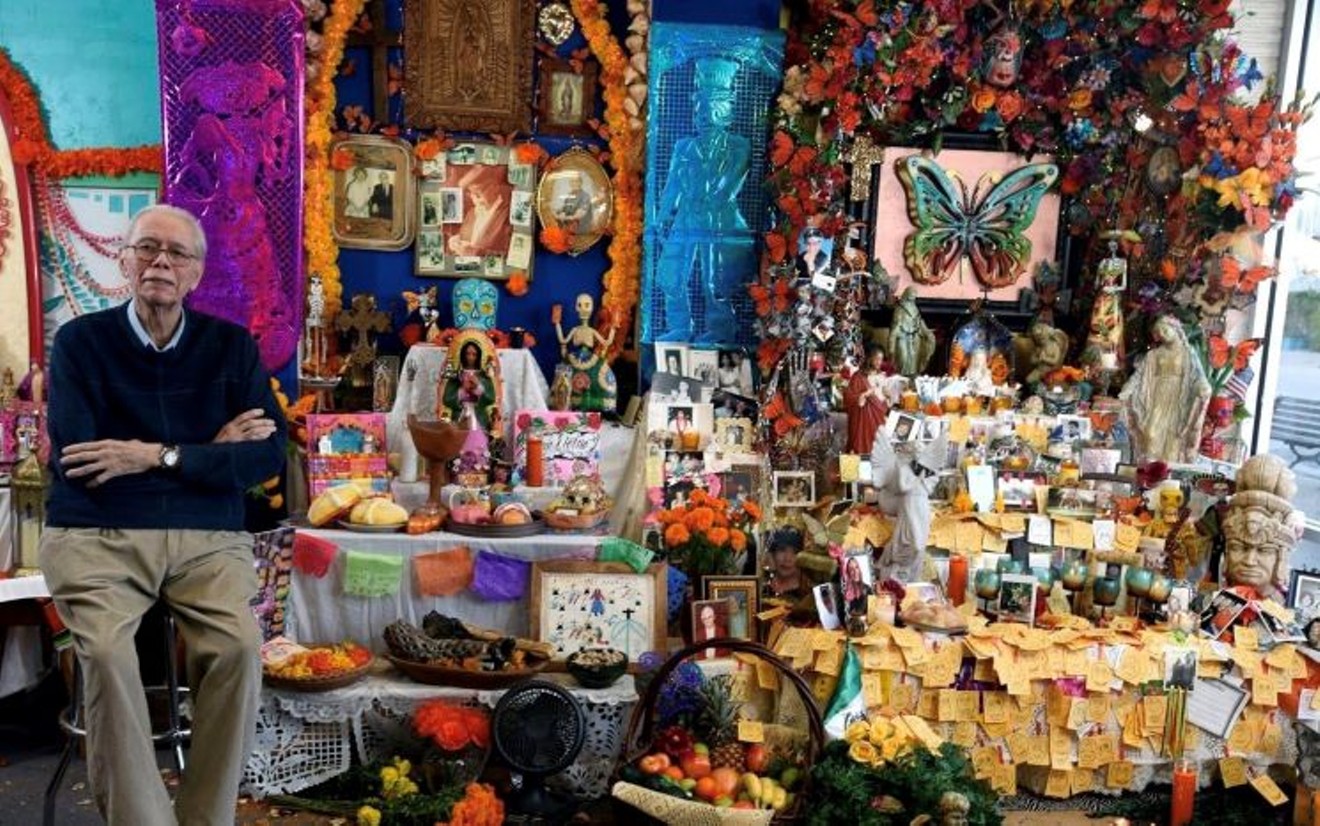 Macario Ramirez at his Heights folk art gallery in front of his annual tribute during Dias de los Muertos to his parents (left) and to lives lost in the community Photo by Agapito Sanchez
His own personal history was captivating — brutally hot summers in his childhood spent as a migrant farmworker with his immigrant parents and six siblings, a friend of Cesar Chavez as a young Chicano activist, a language adviser with the U.S. Department of Defense who braved the hotspots of South Vietnam, Honduras and Guatemala in the ’60s, a specialist with the Labor Department on the plight of Latino workers.

But what lit up Macario Ramirez, who died on June 10, was the history of his people, their rich cultura that was embedded soul-deep in him by his father. Yes, his Casa Ramirez Gallery on 19th Street in the Heights is a business, every inch filled with arts and crafts, books, clothing and accessories. But it has been the side room, the classroom/workroom, that elevated the gallery — and Ramirez — to icon status.

It was there during the weeks before the Days of the Dead, Dias de los Muertos, each autumn that the curious could learn the engrossing and strangely healing art of making ofrendas — a deeply personal, hands-on sort of Latino Ancestry.com to learn about and celebrate departed ancestors rather than mourn them or relegate them to dusty scrapbooks. He was the first to popularize the holiday in Houston, patiently pushing back against those who saw its flowery skulls and grinning, lively skeletons as demonic or disturbing.

During rodeo season, it was where the tales of the Mexican vaqueros, the original cowboys, took center stage. It was where amor eterno — eternal, passionate love — flourished through poetry and blood-red folk art heart sculptures for Valentine’s Day. Sometimes it was simply teaching the history of tequila or the preparation of traditional foods like tamales, pan de muerto and capirotada and sharing them, or the special traditions of Easter and Christmas, Cinco de Mayo and Diez y Seis de Septiembre, Mexican independence day.

While experts were carefully chosen to lead, it was Ramirez’s passion that fueled the sessions, his sheer excitement at knowing he was preserving lessons, customs and stories that might otherwise fade. He welcomed hundreds of schoolchildren into the shop each year and spent time with each class, even as his health faded. That was his mission. Folkart•Cultural Traditions•Good Causes was the gallery’s motto.

And that is the greatest sadness being expressed at Macario Ramirez’s passing Wednesday at the age of 86: The loss of a mentor, a role model, a uniquely committed man — “the bold, righteous voice we needed,” scrawled writer/activist/educator Tony Diaz in a remembrance book at the gallery.

Macario’s wife of 37 years and partner in the gallery since it opened in 1984-85, Chrissie Dickerson Ramirez, said a heart condition hit him hard and fast recently and proved untreatable (it was not COVID-19, she adds). He chose to spend his last days at home in the Heights. After observing a “short period of mourning,” she vows to keep Casa Ramirez open.

The gallery has always nurtured local artists, artisans and writers who share the walls and shelves with items that the Ramirezes carefully handpicked on three or four buying trips to Mexico each year.

The “Good Causes” part, though, has been uniquely Macario’s, his consistent fight for equity for Mexican-Americans in Houston’s schools, government representation and the media. For nearly four decades, he was a key figure at marches and news conferences in Houston, a go-to spokesman for Chicano issues, always good for an articulate soundbite or quote, unintimidated by power or wealth.

“I’m one of those stubborn people who wants to keep going and going and going, but I know that not everything is forever and that someday I’ll have to stop because of my health,” he told an interviewer for an AARP publication last year. “When people come in here — Latinos and people from Mexico and other countries, they say ‘we used to have that’ or ‘we had that.’ This motivates me when people come in and they say, ‘Don’t leave, don’t leave, Mr. Ramirez.’

“Well, all of us will have to leave one day or another. But in the meantime, I want to share the culture and teach the culture.”

His own father — a laborer and craftsman — operated a small shop like Casa Ramirez in San Antonio for decades, and Macario’s venture was a tribute to him, amplified in size and reach. Each year, the son created an elaborate ofrenda at Casa Ramirez during Dias de los Muertos to share his parents’ life and legacy.

An ofrenda, or altar, to Ramirez was erected at his Heights gallery, with a book for visitors to pen tributes.
Photo by Tony Diaz @librotraficante on Twitter

Inevitably, it will be time this year for the man who has embodied Mexican-American culture in Houston to become part of history, a soul and life to be celebrated with affection, warmth and humor. Already, in the recollections of Macario Ramirez on social media, we’ve seen characterizations of him that he would appreciate:

“The grandfather we all hope to have.”

“He introduced Mexican culture before it became cool.”

“You made us proud to be Chicano, and you celebrated our culture before we became a consumer demographic.”

Private services will be held Monday, with burial at the historic Hollywood Cemetery. A public memorial will be scheduled at a later date. The family asks that, in lieu of flowers, donations be made in his name to MECA at TBH Center, 1900 Kane, Houston.
KEEP THE HOUSTON PRESS FREE... Since we started the Houston Press, it has been defined as the free, independent voice of Houston, and we'd like to keep it that way. With local media under siege, it's more important than ever for us to rally support behind funding our local journalism. You can help by participating in our "I Support" program, allowing us to keep offering readers access to our incisive coverage of local news, food and culture with no paywalls.
Make a one-time donation today for as little as $1.