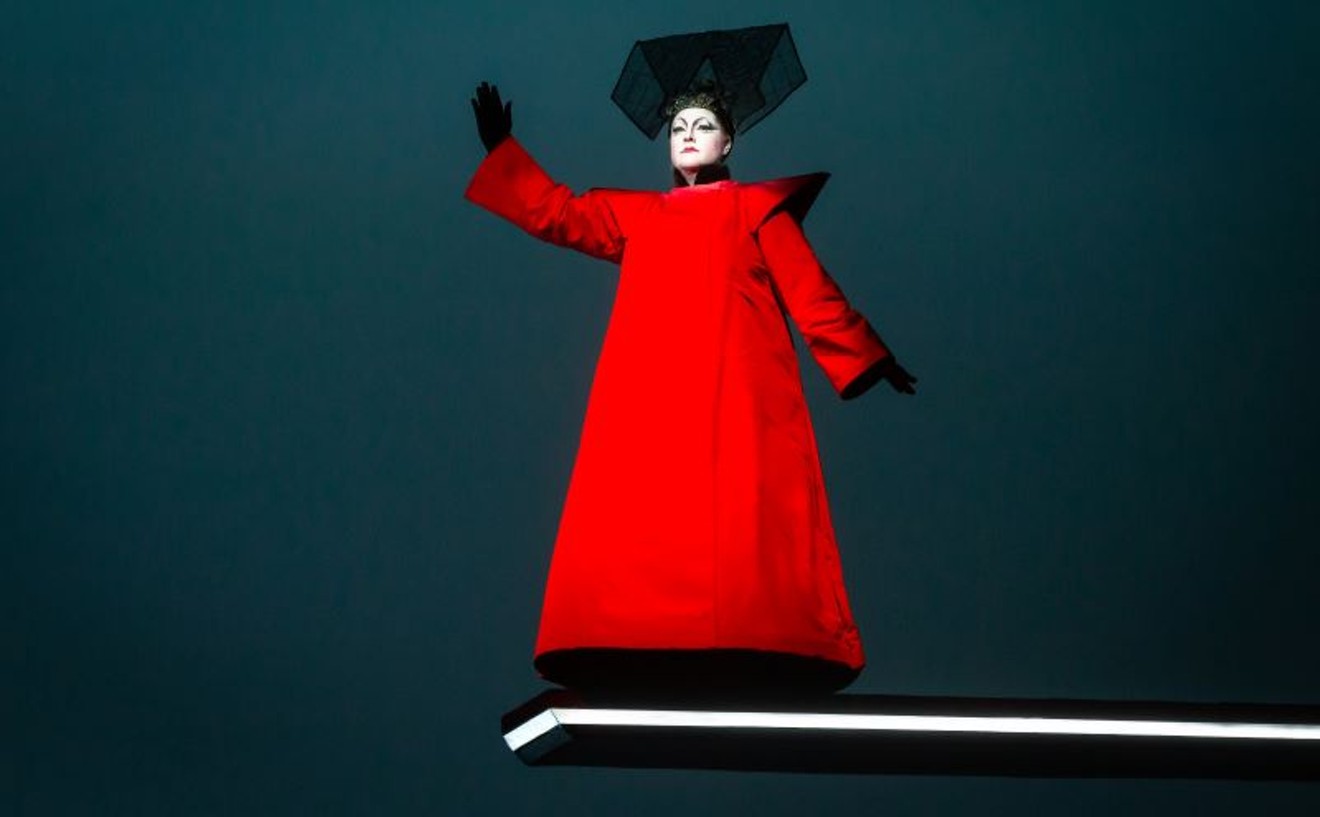 Composer Giacomo Puccini loved fast cars, fast women, and cigarettes. It was the cigarettes that killed him, leaving his final masterpiece, Turandot, unfinished. There were sketches of the final scene and Adami and Simoni's completed libretto that remained, but the music was left hanging. Legendary conductor Arturo Toscanini, who would conduct the opera's world premiere at Milan's La Scala and dramatically end the performance at the precise moment in the score where Puccini stopped his orchestration, had been asked by a dying Puccini “not to let Turandot die.”

Toscanini authorized up-and-coming composer Franco Alfano to finish the manuscript, and that's the version we hear today. It's a hybrid, for sure, but it certainly sounds like Puccini, lush and Italianate, as it draws tunes from earlier scenes using Puccini's fragments as inspiration for the glorious love duet. The final scene is as good as it's going to get.

But this HGO co-production (a quintet comprising Teatro Real of Madrid, Lithuanian National Opera and Ballet Theatre of Vilnius, Canadian Opera Company of Toronto, and Opera National de Paris) is far removed from the heated passion of Puccini's intentions. It is cold and reserved, chilling and unemotional. What else could it be since it's billed in the program as “A Robert Wilson Production.”

For certain theaterphiles, Wilson is a god, a modernist of psychological probing who uses lighting and scenic effects in stunning original work (Eisenstein on the Beach) or when re-imagining classics. But his schtick is beginning to pale. Nothing ages as fast as the avant-garde.

He is a master of stylization. Characters move glacially, stuck in ungainly semaphore positions that seem like Egyptian tomb friezes gone mad, staring straight ahead, not interacting with others. Meanwhile, the lighting – here, neon strips that edge the proscenium bottom or drop in from the flies – have a life of their own, brightening when the music hits a climax, glowing softly in the intervals.

It is minimal in the extreme and absolutely anti-dramatic. Which, I suppose is Wilson's intention. However, this approach makes a complete hash out of Puccini's fairy tale which is filled with grotesquerie, a fickle people's blood lust, and an ice princess of ancient China who, with one wink of her eye, could turn Disney's Frozen heroine into a slushy.

Poor Turandot. She's got issues. She hates men, and in her second act entrance aria, the leather-lunged “In questa reggia” (“In this palace”), she lays out the reason for her hatred. A thousand years ago her ancestor, another princess of China, was raped and killed by invading Tartars. Turnadot has vowed revenge. Anyone who asks for her hand must answer three riddles. If they fail, they lose they head. There have been 12 so far this year, sing her ministers, Ping, Pang, and Pong, with ghoulish relish. Even the children sing about severed heads on sticks. But Calaf, the lead tenor, falls instantly in love with this celestial vision. He will win her, though she vows never to be possessed.

This is all laid out in Puccini's plummy score with diatonic chords, old Chinese melodies, and wisps of new music sweeping Europe through the impressionism of Debussy and Ravel. It's glorious music, the epitome of Italian opera after Verdi. Puccini took up the icon's mantle and wore it magnificently.

Wilson doesn't do anything with Puccini's radiance. He negates it, lessens it, turns it into a sterile pageant without feeling. This is a concert version with fancy costumes and lighting effects. There's no drama in the staging. How could there be with characters frozen in space. Only ministers Ping, Pang, and Pong cavort like commedia dell'arte buffoons, jumping in place with funny faces or walking quickly in mincing little steps.

What's odd is that they do this in “white face.” Is this Wilson's answer to the charges of cultural appropriation that's been recently heaped upon Turandot and Madame Butterfly? This is no better solution to “yellow face.” It's just as objectionable. Though beautifully sung by Takaoki Onishi, Andrew Stenson, and Carlos Enrique Santelli, this contemporary comic trio is as unacceptable as the original D'Orly Carte production of The Mikado. (All characters are rendered in white face; the better to see them, said Wilson in a HP interview.)

So then what are we left with? The singing is very good. Tamara Wilson, as Turandot, acquits herself with distinction in this heavy role that is a touchstone for any dramatic soprano. She hits all the notes with force and conviction but there's a fullness of tone that's missing. Granted, she's an ice princess, but her voice needs warmth and plushness. This isn't her first Turandot, but she's still finding her way around the role, and I'm sure in time the rosiness and velvet will come.

Tenor Kristian Benedikt, can not do stylized. He's awkward and stilted when asked to move like an automaton. He looks out of his comfort zone. But, like Wilson, he can sing Calaf's grand stentorian lines with ease if not silky aplomb. He signature aria – the opera's one hit tune heard worldwide, “Nessun dorma” (No one sleeps) – is easy pickings, even though he must deliver it with arms straight out by his side, looking like a cartoon cutout. All the passion of Puccini's great aria is dissipated. Not his fault.

Soprano Nicole Heaston found her volume after her first appearance and sang a heartfelt Liu, in love with Calaf from afar. But she, too, like all of them, was saddled with static poses and weird hand gestures that left her adrift from any drama. Her final aria, though, was gloriously phrased and most arresting. The trio of ministers, regardless of their stereotyped shenanigans, sang their “remembrance” number with a sweet lullaby reverie that could melt hearts. Peixin Chen was most impressive as old blind Timur, Calaf's father who pleads with his son not to woo Turandot.

Maestro Eun Sun Kim spurred the HGO orchestra into a spirited journey of massed choral work, volcanic outbursts, and rare contemplative passages. This is Italian opera at its zenith, and she found nuance and brilliance within Puccini's massive sonic canvas. The chorus sounded especially grand, and chorus master Richard Bado received a rousing hand during the curtain call.

This frozen, uninvolved production is no definitive Turandot. Under director Wilson's gimlet eye, it's as icy as our princess's heart. She might melt under love's warmth, but the final image has her standing alone as lover Calaf blends into the inky background. She stands aloof in her Ming the Merciless blood-red costume, no happier than when we first met her. This is not what Puccini wanted, even if it killed him.

Performances are scheduled through May 8 at 7:30 p.m. Fridays, Saturday and Tuesday; and 2 p.m. Sundays at Houston Grand Opera at Wortham Center, 500 Texas. For more information, call 713-228-6737 or visit hgo.org. $25-$255.
KEEP THE HOUSTON PRESS FREE... Since we started the Houston Press, it has been defined as the free, independent voice of Houston, and we'd like to keep it that way. With local media under siege, it's more important than ever for us to rally support behind funding our local journalism. You can help by participating in our "I Support" program, allowing us to keep offering readers access to our incisive coverage of local news, food and culture with no paywalls.
Make a one-time donation today for as little as $1.