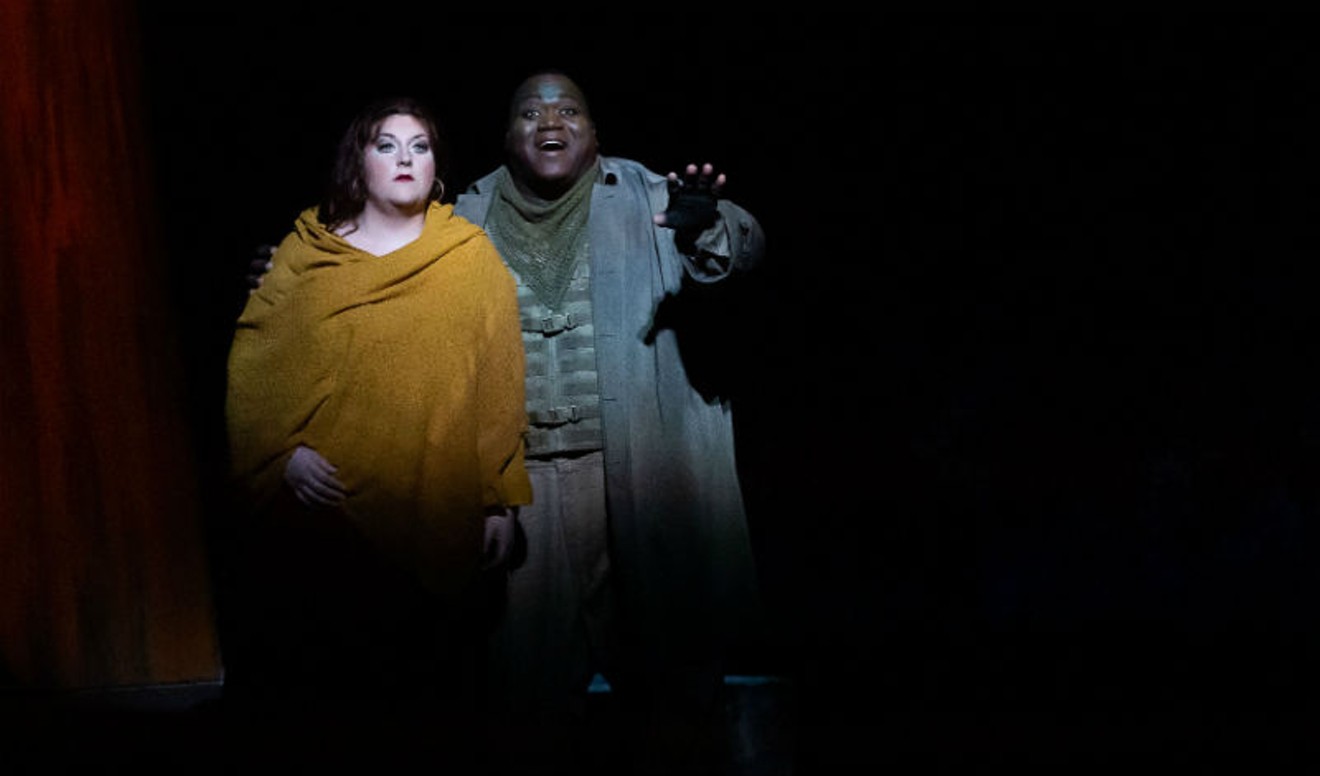 Granted, the former HGO production from fashionista Zhandra Rhodes (seasons 2006 and 2013) didn't look much better, staged flat as a hieroglyphic, but at least it was psychedelic. This one, from director Phelim McDermott, designer Tom Pye, costumer Kevin Pollard, and lighting designer Bruno Poet, is smoky, inky, and drab. An unlit tomb has more personality.

And why, pray tell, is international puppeteer Basil Twist involved as “silk effects choreographer”? I hope they didn't pay him much, seeing as his choreography consists of some diaphanous billows and a dreadful campy routine with the High Priestess of Ptah, whose silky tentacles threatened to strangle the dancers.

There are scant Egyptian “touches” – a conical headdress á la Nefertiti, a pleated linen shift for princess Amneris, some plaited wigs (in Day-Glo blue or orange!) – but everything else resembles outtakes from a 1940s Maria Montez Republic B-movie. The Egyptian army, bedecked with elaborate quetzal plumes, looks like a frieze of Aztec warriors; the generals wear large comic epaulets and capes edged in what reads as monkey fur; the high priestess is a bespangled Las Vegas showgirl; the men in the crowd wear fedoras; and the sooty temples remind one of rough-hewn Mycenae, not the resplendently polychromed halls of ancient Luxor.

There's no consistency to this design, no director's vision, no atmosphere of hot desert and cool rivers, and certainly no spectacle.

Aida without Cecil B. DeMille is no Aida at all.

The famed Triumphal Scene – with its trumpet fanfares ringing throughout the world – is embarrassing in its mundane staging. Verdi's stirring martial music, in celebration of tenor Radames' victory, now limns a dirge, as four coffins are lugged onstage while four meager banners are unfurled and two flags wave in the distance. During the ballet music, there is no dance. Instead, the flags which drape the coffins are dutifully folded and presented to the war widows. This is neither stirring, victorious, nor triumphant. All the air has gone out of Verdi's mammoth Thanksgiving Day parade. Why put on grand opera yet omit the grand?

But...and this “but” saves the show...there is the singing. Magnificent and most pleasing.

Close your eyes, and let Verdi, abetted by maestro Patrick Summers, an exceptionally vibrant orchestra, and his very good cast weave their magic. Although everyone starts off with some hesitancy, by Act III (the glorious Nile Scene), the principals gather steam and proceed post-haste. Suddenly, we're in a very dreamy Aida. While it's not definitive, it's pretty damn close.

Dramatic soprano Tamara Wilson, one of HGO's illustrious alums from its famed Studio, sings the title role with luxuriant tone and effortless power. Her voice is a wonder, bright and crisp, agile and melting, deep and cavernous. She's destined for greatness, but needs a more sensitive director to showcase her prodigious talent. Her acting does not yet match her voice, but once it does, stand back and be amazed.

Tenor Russell Thomas (Aida's closet lover, Radames) has the clarion sheen of immortal Richard Tucker and the silky smoothness of young Placido Domingo. His “Celeste Aida,” one of the most renowned and difficult tenor arias in the rep, was a masterclass of phrasing and musicality. His final duet with Aida in the tomb where he's been buried alive was exceptionally moving.

Soprano Melody Moore, as jealous Amernis, daughter of Pharaoh who's also in love with Radames, has a powerhouse voice. Sliding into a lower register – Verdi asked for a mezzo – she, too, at the beginning, wandered under the volcanic orchestration, but soon found her footing. Her confrontation scene with Aida was dramatically striking, and her plangent last words sung above the tomb of her unrequited lover, “Pace, Pace, Pace,” were a benediction made from tears. (Pay no attention to her ironed blond wig – which Max Factor would swoon over – she's the only platinum Egyptian I know.)

The other roles were expressively sung. Baritone Reginald Smith, Jr., was an electric Amonasro, King of Ethiopia and father to Aida; bass Peixin Chen was a most devout high priest, Ramfis, hurling admonitions like thunderbolts; and bass Musa Ngqungwara sang Pharaoh with a deep, chisel-etched voice that could cut stone.

This production of Aida is a triple collaboration between HGO, English National Opera, and Grand Théâtre de Genève. Let it stay in Europe.

When HGO presents another version of Aida, hopefully, by Thoth, it will keep the same cast, and we can mercifully forget that this production ever happened.

(Note: Mezzo Catherine Martin sings Amernis, February 11, 14, and 16m.)
KEEP THE HOUSTON PRESS FREE... Since we started the Houston Press, it has been defined as the free, independent voice of Houston, and we'd like to keep it that way. With local media under siege, it's more important than ever for us to rally support behind funding our local journalism. You can help by participating in our "I Support" program, allowing us to keep offering readers access to our incisive coverage of local news, food and culture with no paywalls.
Make a one-time donation today for as little as $1.