Doctor Who: Daleks in the Mirror 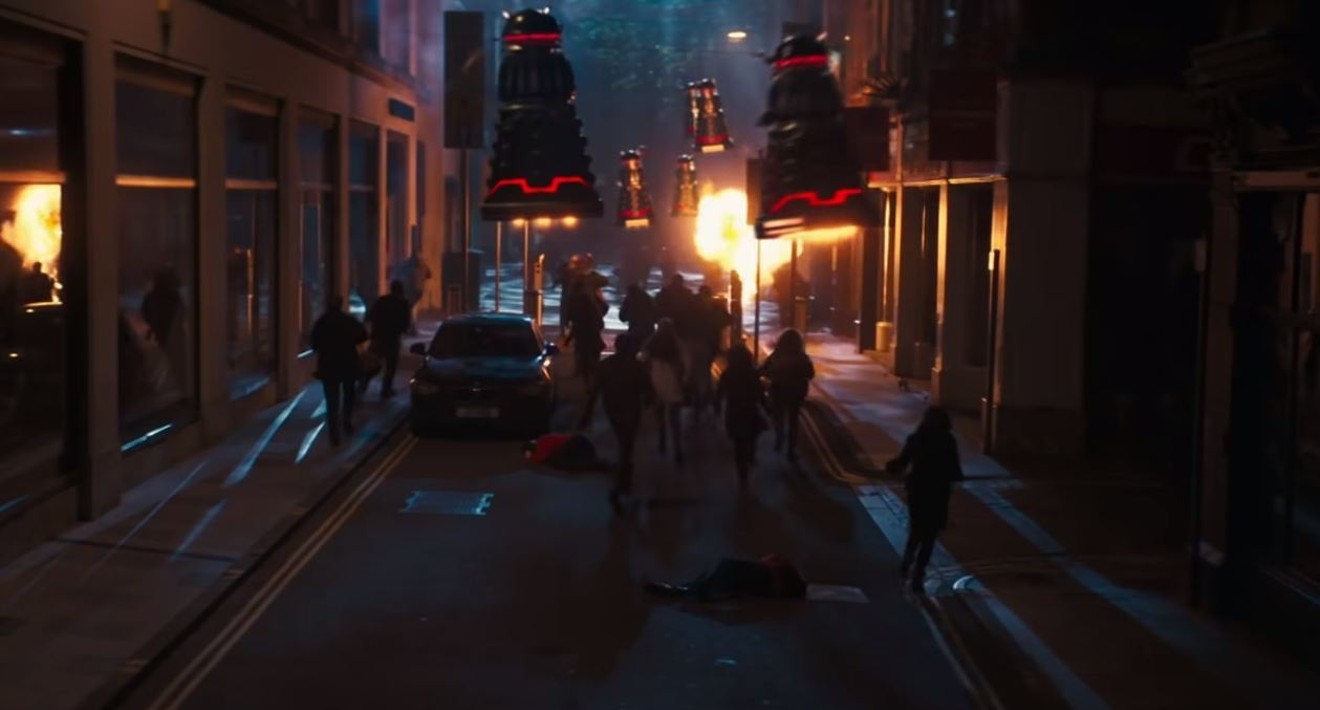 Why are the aliens shooting at us supposed to be scarier than our own government shooting at us? Screengrab from "Revolution of the Daleks"
Much like zombies in the horror genre, Daleks have long been used in Doctor Who to explore the worst aspects of humanity. The original William Hartnell serial of 1963 was a deep, terrifying exploration of where the nuclear arms race might land us if carried out to its ultimate conclusion. The pepper pot monsters have been handy stand-ins for a host of issues, everything from the morality of retaliatory deadly force (“Genesis of the Daleks”) to the suicide cult of racial purity (“Victory of the Daleks”).

The most recent special, “Revolution of the Daleks,” is interested in one question about us: to what self-destructive end will humanity take its obsession with law, order, and control of the masses? In doing so, showrunner Chris Chibnall made the Daleks scarier than they have ever been.

The story opens ten months and several decades (just go with it) after The Doctor (Jodie Whittaker) was thrown in space jail for her many infractions against various galactic laws. She’s despondent and depressed because she is still dealing with the personal ramifications of finding out she is actually an immortal survivor from another universe instead of a Time Lord and Gallifreyan. Eventually, she is broken out of prison by a returning Jack Harkness (John Barrowman), who returns her to Earth. There, she finds Ryan (Tosin Cole), Graham (Bradley Walsh), and Yaz (Mandip Gill) equally melancholy over her disappearance, but determined to investigate a Dalek apparently being used as a security drone for the British government.

The first 30 minutes of the special are absolutely chilling. The sleek, black Dalek shell casings (operated by remote artificial intelligence rather than a mutant pilot) are sent in against protesters in a clear nod to the protests against police violence that dominated America over the summer. As the silent, impersonal machines fire pressurized water, tear gas, and sound weaponry at angry demonstrators, the Daleks appear as the ultimate personification of state violence.

It can’t be overstated how powerful the evolution of the Dalek is at first. Gone is the toddler-like speech and battle cry of “exterminate.” They don’t even have the pseudo-nationalism of the Daleks used by Winston Churchill in “Victory of the Daleks.” All they are is the perfect, faceless figures of government authority against its own citizens for vague reasons never fully explained. The Daleks are reversed engineered for profit by a returning Jack Robertson (Chris Noth from "Arachnids in the U.K.") and deployed on British soil by the new Prime Minister Jo Patterson (Harriet Walter).

The audience is never given any reason why the British government might need a robotic street security force to augment their police. All we know comes from conversations between Robertson and Patterson that the authority complex feels overwhelmed and needs back up, and considering these are some of the slimiest human villains of the show’s last decade it’s pretty safe to assume their problem has more to do with controlling bullshit than any sort of dangerous riot situation. Why does the British government build Daleks? Because they can and they don’t like it when people in the streets have criticisms.

If the entire episode had leaned into this, it might have been one of the best stories of all time. Alas, it devolves into a pretty standard Dalek tale of racial purity and big spaceships and last-minute daring-do. All of that is wonderful, but for a moment it seemed like the show was going to face one of the most important social issues of the moment head on. Instead, it used the American demonstrations merely as a backdrop.

This has been something of a problem in the Chibnall era. On the one hand, the show has never been timelier in the issues it tackles or more aware of the power of The Doctor’s status as a moral hero. On the other, episodes often stop short ideologically. “Kerblam!” was happy to give some shade to the corporate dominance by companies like Amazon, but still insisted that it was a problem of a few bad actors instead of an institutional crisis. “Demons of the Punjab” focused the unrest in 1947 mostly on Hindus and Muslims instead of the actions of the British. In a way, this incarnation of Doctor Who is the Hamilton of science fiction: seeming like the voice of revolution without sacrificing the support of the wealthy status quo. It’s a very elite liberal show, and that is both bad and good.

“Revolution of the Dalels” ranks very high both in terms of a Thirteenth Doctor adventure and Dalek stories as a whole. The entire runtime is a thrill, and despite the usual crowded Tardis crew and additional guest stars everyone seems to get plenty of time to grow and shine. I just wish that the show would follow its own premises a little further. The Daleks of this episode were far more terrifying when they were hollow shells repurposed for human violence against the voices of the oppressed. By contrast, the mutant squid monsters are tame.
KEEP THE HOUSTON PRESS FREE... Since we started the Houston Press, it has been defined as the free, independent voice of Houston, and we'd like to keep it that way. With local media under siege, it's more important than ever for us to rally support behind funding our local journalism. You can help by participating in our "I Support" program, allowing us to keep offering readers access to our incisive coverage of local news, food and culture with no paywalls.
Make a one-time donation today for as little as $1.