Houston Ballet Closes Out its 2021-22 Season in Fine Form

In a night filled with the ethereal beauty and other worldliness of La Sylphide — said to be the oldest ballet still performed today — it was the world premiere of Artistic Director Stanton Welch's Sparrow on Thursday that had the audience tapping toes and then rising in a standing ovation.

As the curtain rose on Sparrow, an ensemble of Houston Ballet dancers snapped their fingers to "Cecilia" — and even got to yell at one point —  followed in short order by other familiar songs from Simon & Garfunkel. The ballet took off with the third song "Baby Driver" with the spotlight on Demi Soloist Simone Acri and his relentless twirls.

The story told with "The Only Living Boy in New York" was a haunting one of departure and loneliness followed by the ballet's title song "Sparrow" where Neal Burks, a member of the Corps de Ballet got his chance to shine and did so. One unifying thread tying the parts of the ballet together was Soloist Tyler Donatelli who was the only woman in the mass of men at the start of "Cecilia" and who, when she wasn't dancing, spent much of the ballet running across the stage, her blond ponytail bouncing along behind.

The last song "A Hazy Shade of Winter" with its pounding, martial beat was fast, furious and the perfect crescendo ending to the piece. Enough can't be said of the lighting design by Lisa J. Pinkham whose understanding of Welch's work continues to enhance his artistic vision on stage.

The curtain that greeted audience members when they returned from the first intermission was another matter entirely. The heavy looking maroon and black projection reminiscent of movies of the 1940s was followed by an overture that only reinforced that feeling.

The surprising thing about August Bournonville’s La Sylphide (written in 1836 with music by Herman Severin Løvenskjold) is that despite its tragic story of love, loss and betrayal, there is a lot of comedy woven throughout. Aaron Daniel Sharratt did a fine job as Gurn, in trying to convince other villagers that LA Sylphide had been there and in expressing his unrequited (to a point) love for Effie danced by Soloist Alyssa Springer. 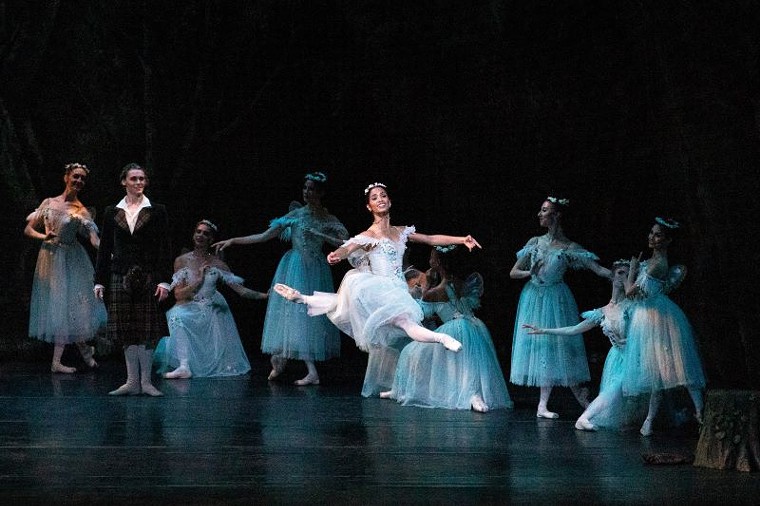 Principal dancer Karina González stayed on her toes for much of La Sylphide.
Photo by Lawrence Elizabeth Knox
As always, Principal dancer Karina González was a vision in her white tulle tutu and ably performed the part of a mysterious spirit who lures the would-be bridegroom James away on the day of his nuptials. She spent an extended time doing pointe work and somehow made it look like the easiest, most natural thing in the world.

Kilt-clad Soloist Chandler Dalton more than held his own as James, the Scotsman who cruelly tries to oust the witch/fortune teller Madge from her spot by the warming fireplace, only to suffer her revenge when she bubbles up a pot of poison and soaks a scarf in it — a magic scarf that she gives to James and that kills the Sylph when he wraps it around her.

Principal dancer Jessica Collado under a heavy coat of face paint, did her usual wonderful job of filling a character role and was a crowd favorite on opening night. The second act opened in dramatic style thanks to the original lighting design by Tony Tucci that was recreated by Houston's Christina R. Giannelli with Madge huddled over her pot as her minions crouched in front.

This was the last performance of the Houston Ballet's 2021-22 season and many in the audience had to be sharing the same feelings expressed by one man, who getting up at intermission said to his party: "What am I going to do till next season?"

Performances continue through June  26 at 7:30 p.m. Friday, Saturdays and Sunday at the Wortham Center, 501 Texas. For more information, call 713-227-2787 or visit houstonballet.org. $25-$149.
KEEP THE HOUSTON PRESS FREE... Since we started the Houston Press, it has been defined as the free, independent voice of Houston, and we'd like to keep it that way. With local media under siege, it's more important than ever for us to rally support behind funding our local journalism. You can help by participating in our "I Support" program, allowing us to keep offering readers access to our incisive coverage of local news, food and culture with no paywalls.
Make a one-time donation today for as little as $1.