The Lilies of the Field Bloom for A.D. Players at The George 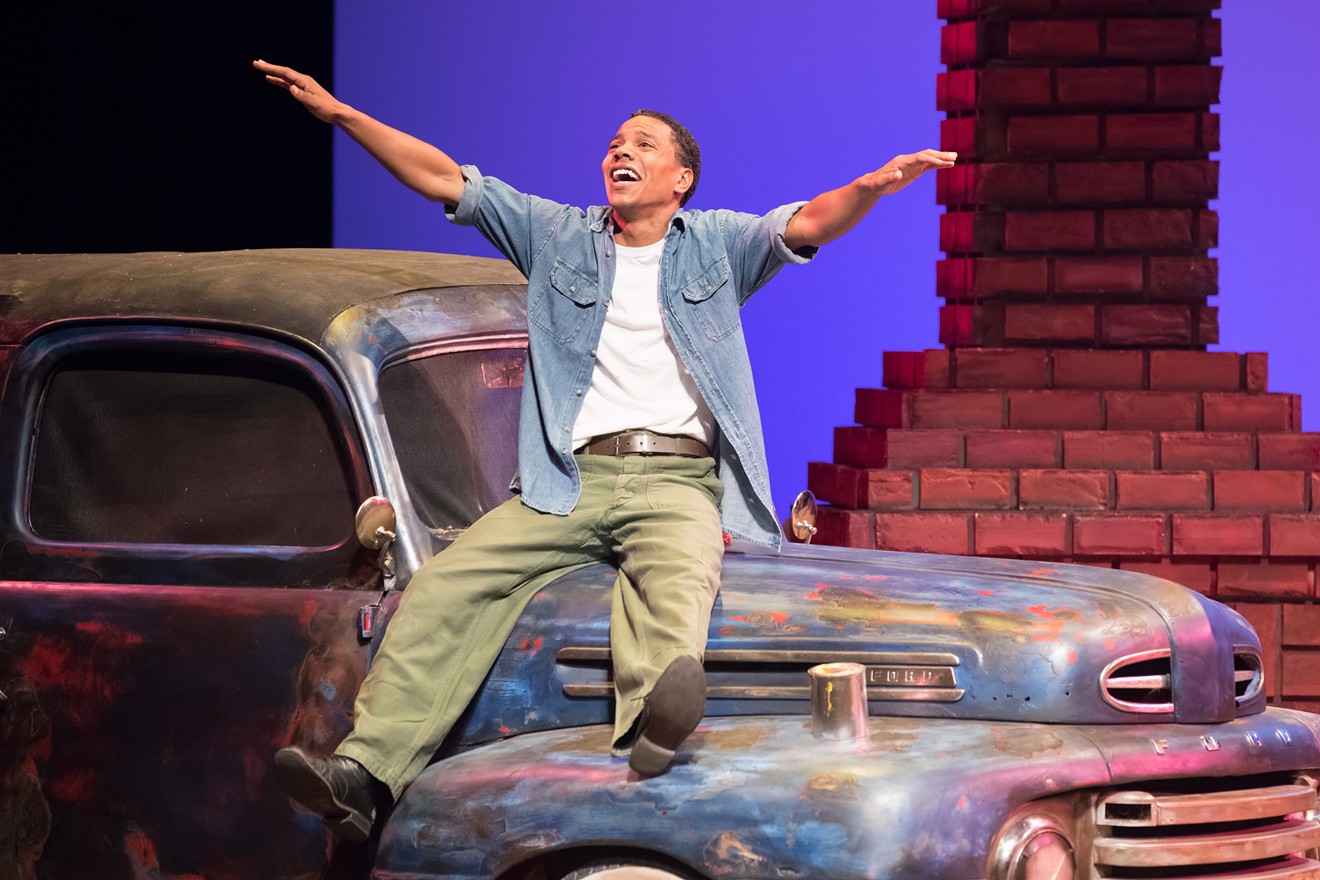 Kendrick Brown as Homer Smith in the A.D. Players at The George production of The Lilies of the Field. Photo by Jeff McMorrough
If you’re familiar with The Lilies of the Field, it’s likely because of the 1963 film, which won Sidney Poitier his first Oscar, making him the first African-American man to win Best Actor. Though the film has fallen out of rotation these days, the A.D. Players at The George have brought the play to Houston and, in doing so, is attempting to prove that it’s simple story about faith and the unlikely partnership between a group of Catholic nuns and a black Baptist from South Carolina is still as inspirational and charming as it ever was.

And to start, five Catholic nuns from the wrong Germany are probably the last thing you expect to find while driving through a desert, but that’s exactly what Homer Smith, a former soldier now living life on the open road, finds in The Lilies of the Field. He comes across the nuns’ rundown farm and, willing to do a day’s work in exchange for a little money, stops and agrees to fix their leaky roof. But Mother Maria Marthe (Pamela Vogel) insists that Homer first eat lunch with them, and then stay for dinner, and maybe teach them a little English, and drive them to town for church and – well, you see how this is going. Though Homer sees himself as a ramblin’ man, a rolling stone, Mother Maria Marthe sees him as much more: an honest-to-God-sent miracle not just there to fix a roof, but to help them realize their dream of building a chapel.

Homer resists, but resistance proves futile; he stays, wondering how the heck he’s going to build a church in a desert with nothing but a crowbar and a bucket. It’s a test of faith for both Homer and the nuns, and it drives the story forward.

The Lilies of the Field, adapted by F. Andrew Leslie from a novel by William E. Barrett, is a simple story, but still an uplifting portrait of shared humanity. It’s a post-war period piece that avoids the tropes usually associated with the appearance of a person of color or deeply religious individuals (though hints do appear) in favor of musing on the power of belief, not just in a higher power but in other people; the strength of a person’s convictions; and notions of community. Modern audiences may be surprised by the show’s seemingly low stakes and lack of conflict, but director Chip Simmons has put together such an enjoyable, harmonious production, that it can almost be ignored. And it starts with the actors.

So much of The Lilies of the Field depends on Kendrick Brown and he delivers. As Homer, Brown is an animated charmer with an infectious energy, relatable in everything from his love for his car to his frustration with Mother Maria Marthe. (He also deserves special mention for the very funny and hard fall he takes off said car.) Brown’s immense likeability makes it easy to believe that he’d win over a group of East German nuns, and it’s important because the script has him alone on stage talking to the heavens (meaning himself) around a dozen times. That said, it’s his scenes with Vogel’s Mother Maria Marthe that are a particular treat.

Mother Maria Marthe is a tough woman, with ex-G.I. Homer describing her as “top sergeant” on the farm. (This role, by the way, earned Poitier’s co-star, Lila Skala, an Oscar nomination for Best Supporting Actress.) Between her repeated and shrill calls for “Schmidt!” Vogel correctly identifies moments of softness and vulnerability for the Mother Superior, such as her interactions with Brown during “Down to the River to Pray” and the moment he has to pick up the slack faith-wise when she fails to get bricks from a construction company.

Still, her iron will is never in doubt; when Homer attempts to negotiate with her using Bible verses, someone in the audience whispered, “I don’t think he’s going to win against her.”

Kendrick Brown as Homer Smith and Pamela Vogel as Mother Maria Marthe in the A.D. Players at The George production of The Lilies of the Field.
Photo by Jeff McMorrough
Like Brown, Luis Galindo as the play’s narrator, Father Gomez, has a particularly tough job. The harmonica- and guitar-playing troubadour does a lot of the play’s heavy lifting, as someone clearly has never heard the phrase “show, don’t tell.” This play is overly reliant on narration as exposition, especially in the second act. It can be long and redundant, as Leslie clearly either didn’t trust the audience or couldn’t think of better ways to move the story along (or both), so it’s truly a testament to Galindo’s abilities (and singing voice) that Father Gomez’s appearances are as pleasant as they are.

Cora Hemphill, Tracy Ahern, Patty Tuel Bailey and Leslie Lenert play the other sisters, who are taken with Homer and often willing to lend an ear, if unable to always comprehend. They provide some very funny moments, such as the English lesson that has them not only learning some useful phrases but picking up some of Homer's cadence and inflections, and some lovely musical interludes. Orlando Arriaga also contributes his musical ability as Jose, Homer's self-described best friend, while Ric Hodgin adds just a splash of antagonism as Orville Livingston.

The team of Patty Tuel Bailey (costume design), Jim Elliott (lighting design), Ryan McGettigan (scenic design) and Callie Timme (properties master) successfully bring the world of this play to life. The warmth and wood of the set especially evoke a homesteader, frontiersman lifestyle. It's aesthetically pleasing and utilitarian, topped only when later the chapel takes shape. And then there's the car, an operational Ford Woodie Wagon that serves as an impressive set piece in and of itself.

Speaking of stage cars, before he became an indie film darling in the ‘90s, director Kevin Smith was a high schooler in a production of Grease, a production that featured the front end of a car they’d cut up in shop on stage. He says for years, until Clerks hit, people back home would come up to him in continued amazement saying, “You were in that play where they put half a car on the stage.” Well, The Lilies of the Field has an entire working car on stage, and that technical feat still doesn’t overshadow the quaint show A.D. Players is putting on, a show that is sure to send even the most cynical of audience members home humming "Old-Time Religion."

But, not for nothing, there is an entire car on stage.