Marriage, Mozart Style in The Marriage of Figaro at Houston Grand Opera 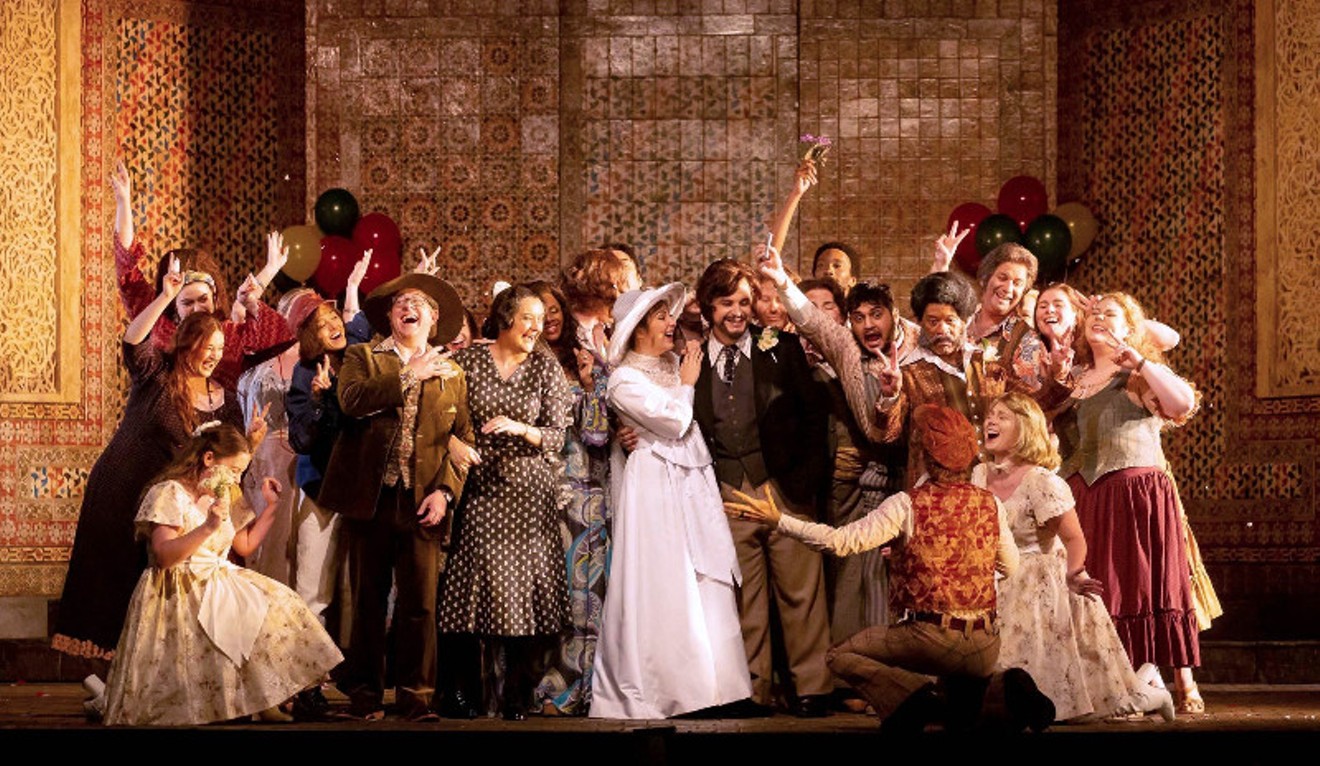 A Houston Grand Opera production of The Marriage of Figaro that abounds with scene stealers. Photo by Lynn Lane

It isn't the spiffy red and yellow Italian sports car (an Alfa Romeo, maybe) that arrives during the effervescent overture to Mozart's The Marriage of Figaro (1786), carrying the Count and Countess Almaviva (bass-baritone Adam Plachetka and soprano Nicole Heaston) to their Moorish villa, that perks up this incandescent opera, it's the arrival of randy pageboy Cherubino (soprano Lauren Snouffer).

In this iconic “trousers role,” Snouffer literally bounds into Act I and never stops bounding. Playing a boy who's continually in love with someone, anyone, but the Countess is his unrequited desire, she's an utter delight, whether hiking up her Carnaby Street pants or rearranging her newsboy's cap as she sidles up to the newest maid and puts the make on her. It's her voice, of course, that seals the deal, as she gloriously sings her heart out with Mozart as perfect accompanist. Her lilting serenade to being in love, “Voi, che sapete” (You who know) was perfectly rendered as she took the particular heartaches of this yearning teen and morphed them into the universal. Much as genius Mozart does to Beaumarchais' trenchant satire via De Ponte's vibrant libretto.

Snouffer's a scene stealer of the highest order, and it takes quite a lot to make an impression with so many other scene stealers in sight in this picturesque co-production from Houston Grand Opera and Glyndebourne Festival. You might remember this Michael Grandage-directed production from the 2015-16 season. Has HGO's associate lighting designer Michael James Clark tweaked the light plot of original designer Paule Constable this time, for everything seems a bit brighter and better focused, or have my eyes aged in the past eight years? The last act's Garden Scene is absolutely gorgeous with its rich azure shadows, stone pool, and Alhambra-esque columns and arches. The very satisfying set design is by Christopher Oram – all golden tiles, Moorish flourishes, coffered ceilings, and glass lanterns.

Getting the better of your betters wasn't a suitable topic for the privileged class in 1778 when Beaumarchais wrote his scathing political comedy. France's Louis XVI hated it; Austria's emperor Joseph II banned it on stage but permitted its publication because he said no one reads plays so who would know what it was about. It was a firebrand work, but by turning it into an opera, Da Ponte and Mozart buffed down the rough incendiary message and morphed it into a paean to love in all its guises – passionate, unrequited, longed for, lusted after. It's a brilliant revision, and there's plenty of politics still as undercurrent, but the musical surface is so glittering, emotional, comic, and apt – Mozart at his finest – that Joseph allowed it on stage. The collaborators produced one of the great works of mankind.

There's no opera without a Figaro, and HGO has a picture-perfect one in Argentinian bass Nahuel Di Pierro. He's internationally renowned for his Mozart and Baroque music interpretations, and Houston is fortunate to hear him in all his glory. His voice is rich and dark, expressive and supple, as is his acting. (All the principals create well-rounded characters, thanks, I assume, to revival director Ian Rutherford.) Di Pierro's Figaro is one crafty valet, scheming to thwart Almaviva's designs on fianceé Susanna (vivid and scintillating soprano Elena Villalón). After their marriage, he's not above a pique of jealousy and also receives a soft comeuppance from her, one of the first female characters in opera with a fully-formed personality who's as strong as the men.

Villalón, a last season's graduate from HGO's Studio Program, is a revelation. With charisma to spare and a voice of easy clarity and agility, she's a star on the rise. Her Susanna is in constant motion, sparkling and shining. Like Snouffer, you can't take your eyes off her, your ears either.

The opera's other celebrated aria, the Countess's lament to lost love, “Dove sono” (Where are those happy moments), was lovely as sung by Heaston, but it didn't move us as it should. I remember her as an affecting Liu in Puccini's Turandot from HGO in 2022, but here her voice isn't round and solid, but a bit pinched. Maybe it was an off night. It can happen, even more so during opening night.

If you like your Count Almaviva more “buffa” than slick and oily, then bass-baritone Adam Plachetka's interpretation will be your cup of tea. Usually the soigné Count is depicted as elegant and suave, quite the lady's man. Here, he's blustery, definitely out of his depths, and ready to be punched down a peg. He doesn't have far to fall. This is, I suspect, director Grandage's concept of noblesse oblige, for the Count's dressed in garish paisleys and ruby velour. He's no match for anyone. Plachetka (who sang Figaro for HGO in 2016) has fine diction, a huge voice, and definitely paints a picture of a rundown roué. Why the Countess wants him back is a mystery.

Maestro Patrick Summers leads the orchestra with a velvet touch and plays the harpsichord recitatives with panache. He loves his Mozart. You can hear it in the textures he draws out of the ensemble, the details he elicits and the plaintive phrasing. It's lovely Mozart making. Perhaps the pace could be a little faster. Figaro runs three-and-a-half hours. No matter how brilliant, even eternal masterpieces can sometimes stand a slight kick.

The Marriage of Figaro. Performances continue through January 28 at 7 p.m. Thursday, Friday and Saturday; 2:30 p.m. Sunday January 15 and 2 p.m. Sunday January 22 at the Wortham Center, 501 Texas. For more information, call 713-546-0200 or visit houstongrandopera.org. $20-$210.
KEEP THE HOUSTON PRESS FREE... Since we started the Houston Press, it has been defined as the free, independent voice of Houston, and we'd like to keep it that way. With local media under siege, it's more important than ever for us to rally support behind funding our local journalism. You can help by participating in our "I Support" program, allowing us to keep offering readers access to our incisive coverage of local news, food and culture with no paywalls.
Make a one-time donation today for as little as $1.