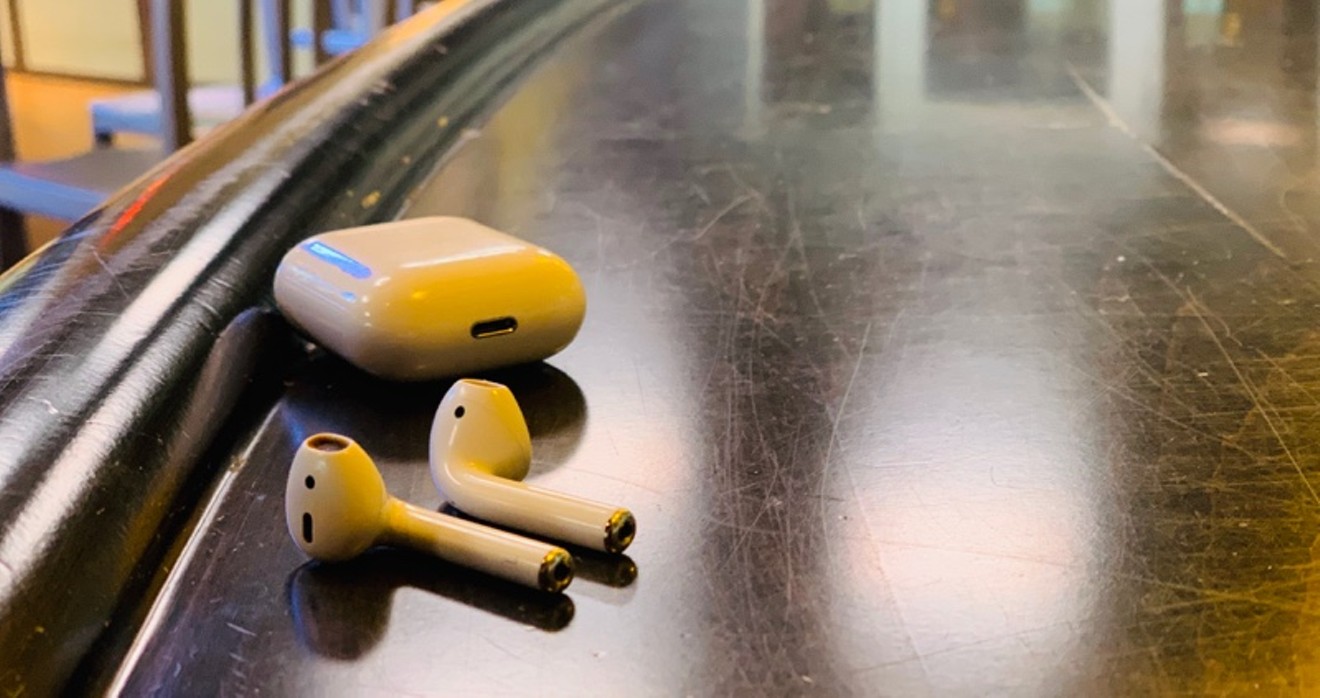 A pair of AirPods walk into a bar. Photo by Kate McLean
In the middle of wiping down a bottle of Irish whiskey, the abrasive sound of wood screeching on concrete alerted me to a new guest adjusting himself on a bar stool. Grey suit, top two buttons unfastened, he placed his cell phone on the bar and watched me approach with a cocktail napkin and glass of water, no ice.

Just as I opened my mouth, he raised his hand as if to catch my words and wave them away before they could interrupt what or who was on the other end of the two, white earbuds fit snugly in each ear.

Not knowing whether he was on a phone call, catching the last of a podcast, or now paying attention to me—I said them anyway.

Tiptoe service, once again—a style that, in recent years, waitstaff have adapted to when interacting with guests preoccupied by cell phones or audibly “checked out” via earbuds.

Psychologists have come to define the phenomenon as “inattentional blindness,” or, the inability of a person to notice surrounding circumstances due to them being preoccupied by something else—so, as a bartender, while I’m eager to initiate a full-service experience beginning with a smile, a greeting— I’m unwilling to cower in apology after you’ve motioned me away for “interrupting” you and whatever it was you were listening to.

After all, guests are expected to act as just that, guests.

Now. Same guest, except the waitlist is bubbling into the parking lot, the manager may or may not have “accidentally” unplugged the phone, and in the background a two-day old trainee is taking drink orders like it’s IHOP. In this scenario, okay, a distracted guest is a godsend. However, this rarely feels the case.

Beverage consultant Linda Salinas says when interacting with guests, communication is everything. Most times she relies on subtle social cues. “For me, the bartender’s handshake is dropping water followed by three soft taps, it’s a good approach without interrupting a conversation between two people, or someone with AirPods in.” With a background in fine dining, “silent service” is important, Salinas explains. She says that while it is acceptable for single diners to wear wireless earbuds at a hotel or restaurant—in a high-end cocktail setting, it isn’t.

While the overall visual perception of users is that they’re aloof and not to be bothered, on the streets—maybe a little dangerous, but fine. In a library, at the office—probably also fine. At a bar, in a restaurant, wherever service is given through verbal communication—here is where the line begins to blur and a new set of etiquette, one probably never envisioned by Emily Post author of Etiquette in Society, in Business, in Politics, and at Home (1922), is being carved out.

Headlines the world over have chronicled the service industry fed up with cell phone usage slowing down the dining process, and that’s not to mention the "I’m busy" attitude furthered by earbuds. It’s true. The beautiful madness of serving guests in peak hours is stunted when one party in the relationship isn’t paying attention. Some restaurants have proudly retaliated, from prohibiting devices all together to banning the use of electronic devices while ordering in line.

In the article, “The New Rules Of Dining Out,” in which writer Scott DeSimon interviewed leading chefs and restaurateurs across the nation, with the question, “What do guests do that make your job harder?” Poof, there it is again: “Use their phones when they order.”

Unless a silent disco group decides to descend upon an establishment for dirty martinis and a cheese board or two, the majority of diners who use wireless earbuds are there alone. Hence the need to occupy themselves— great. Wireless earbud usage in between initial greetings, order-taking, and settling up rarely gets in the way—it’s when guests half-communicate while trying to do both that has service personnel changing their approach. Tiptoe service.

Introduced in December of 2016, and a second version again in March of 2019, AirPods advertise a new and improved perceptiveness and ability to react to those who wear them. Also advertised, a H1 headphone chip—and just recently beginning in October with iOS 13.2 and the AirPod Pro model, a feature called “Announce Messages,” which will allow users to hear messages as they come in and respond.

At the bank. In the carpool line. In and out of an Uber.

Justin Litz, an avid Apple consumer, loves the way AirPods fit, is shocked he hasn’t lost them in the last two years, and constantly preaches their convenient attributes. However, he does notice a disconnect within society when people are performing personal interactive tasks, like checking out at the grocery store. “Anywhere you wouldn’t use your cell phone, you shouldn’t use your AirPods.” Litz avoids wearing them in public because of the unavailable image it gives.

Billed as “more magical than ever,” “automatically on and always connected,” with “Hey Siri” handy to summon resources near and far, AirPods by Apple, but really wireless earbuds in general, add convenience and entertainment to everyday life, while at the same time, distraction. And while the trend of dining with wireless earbuds isn’t going anywhere anytime soon—that’s okay, as long as attached to it comes new etiquette with regards to interacting with service staff.

“Hi. I’m going to make an order to go, and I’ll have an Old Fashioned while I wait,” Grey suit, top two buttons unfastened said several minutes after our first interaction.

See, was that so hard?
KEEP THE HOUSTON PRESS FREE... Since we started the Houston Press, it has been defined as the free, independent voice of Houston, and we'd like to keep it that way. With local media under siege, it's more important than ever for us to rally support behind funding our local journalism. You can help by participating in our "I Support" program, allowing us to keep offering readers access to our incisive coverage of local news, food and culture with no paywalls.
Make a one-time donation today for as little as $1.