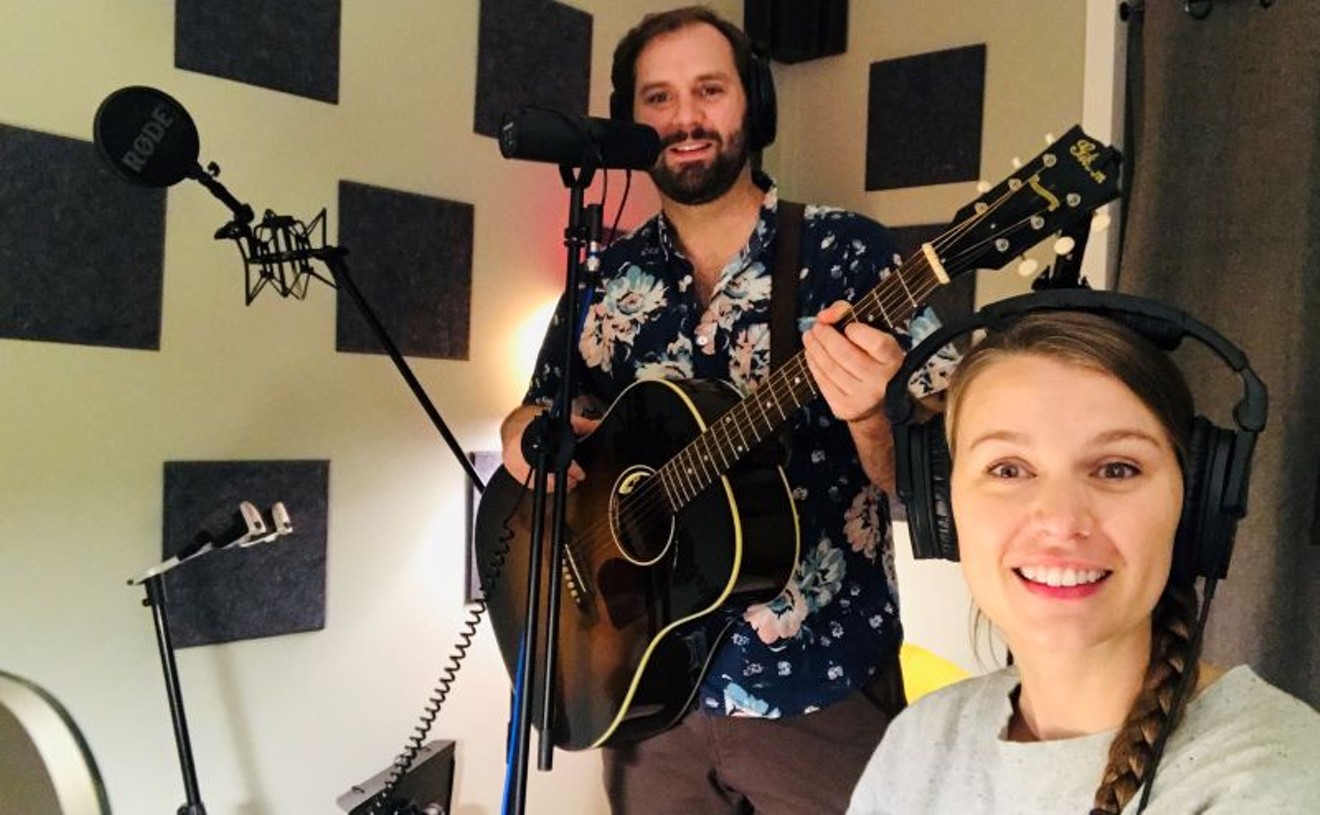 Ben Hope and Katie Baron Hope were all set. The husband-wife duo (Ring of Fire, Hank Williams: Lost Highway) had been commissioned by Houston's Stages theater to write Nashville Jukebox Live. "It was going to be our January show," says Stages Artistic Director Kenn McLaughlin.

Then, of course, COVID hit and the show they'd designed that depended on a lot of interaction from the audience members who would pick the song selections each night (just like feeding a jukebox). "It really was a live jukebox with a live band," McLaughlin says. A wonderful, inventive concept that didn't seem possible to do virtually.

"We ended up landing on this radio program," McLaughlin says. And it is based on real life — namely, the experience of the couple buying their first home and settling in one place after years of traveling all over the world to practice their art. The songs they play are some of their favorite holiday songs, accompanied by them talking about their own family traditions.

Holiday at the Hope’s was recorded in their home. Audience members are invited to tune in, just as if it was an old-school radio show and relax and listen, McLaughlin says.

"We had some story conversations what is the story is that interesting enough. I asked them, 'What's the dream for this house?' And they said we’re settling down; we want to start a family. The show itself is actually a recording for their first child. They're recording it to be able to give to their child what this year was like when they started to dream about having that child.

"They don’t talk about it. But Ben had COVID at the very beginning of the crisis. So I think the way that they look at health and life and eternity has definitely shifted. As the play opens up, they say we want to make sure that we put our holiday traditions on record for you so that no matter what happens, we know that we captured this for you. It has this incredible sweetness about it but also it rises out of an authentic moment of what we're experiencing. It’s not random. It exists in this moment for all of us."

The show Buttons' Sleeping Beauty: A One-Man Outrageous Unbelievable COVID Lockdown Panto clearly was influenced by the pandemic conditions. Originally Stages had commissioned a Panto Little Mermaid but when Theatre Under the Stars announced it was bringing back Little Mermaid, Stages ditched that idea. Last year when both Stages and A.D. Players did versions of Miracle on 34th Street it just confused a lot of people, McLaughlin said.

Stages decided to bring back a Sleeping Beauty Panto it had done ten years ago, one that was very successful, McLaughlin said. "When COVID hit it seemed logical that we could kind of go in and noodle with that." But as they got more and more involved, it was clear the material wasn't working exactly as they'd hoped in the new concept complete with COVID. They retained the songs from the original, but went back to the drawing board for a this-is-what-it-is kind of moment, he says.

McLaughlinn, who wrote the book and lyrics for the COVID Panto, said the show is really designed to reassure children. "We're definitely talking about being afraid and being lonely and locked in but the real power exists inside yourself to combat anything. It really is a play that celebrates resilience and imagination, play, childhood and ultimately the pandemic is destroyed. The manifestation of the pandemic is the evil character. The hero [Serena], the young woman, is a scientist and she destroys the pandemic."

Ryan Schabach is back as Buttons — handling a herd of life-size puppets — and Genevieve Allenbury is back, this time virtually from her home in London. Stages was able to film the show on its own stages and in a rehearsal room since it was operating under a Screen Actors Guild contract rather than Actors Equity which governs live theater productions. The ever-gifted Jodi Bobrovsky is the properties designer and puppet master, Leslie Swackhamer directs with music direction from David Nehls. McLaughlin also filled the scenic designer role. And Peter Ton is the director of Cinematography.

"I think when I look at [Buttons' Sleeping Beauty] I don’t know that I’ve ever made anything with more love in my heart and with more of a desire to offer love to the world. I don’t think I’ve ever been more aware of how important it is we connect as a community and had a deeper desire to send love and joy to children. Just thinking about how important that our kids feel safe and loved and there going to be an amazing future ahead."

Holiday at the Hope's continues through December 13. Buttons' Sleeping Beauty: A One-Man Outrageous Unbelievable COVID Lockdown Panto begins December 15 and runs through December 27. Both are live-streamed on demand. To register and receive the performance link, please visit StagesHouston.com. $25.
KEEP THE HOUSTON PRESS FREE... Since we started the Houston Press, it has been defined as the free, independent voice of Houston, and we'd like to keep it that way. With local media under siege, it's more important than ever for us to rally support behind funding our local journalism. You can help by participating in our "I Support" program, allowing us to keep offering readers access to our incisive coverage of local news, food and culture with no paywalls.
Make a one-time donation today for as little as $1.