Which Video Game Character Has the Highest Salary? 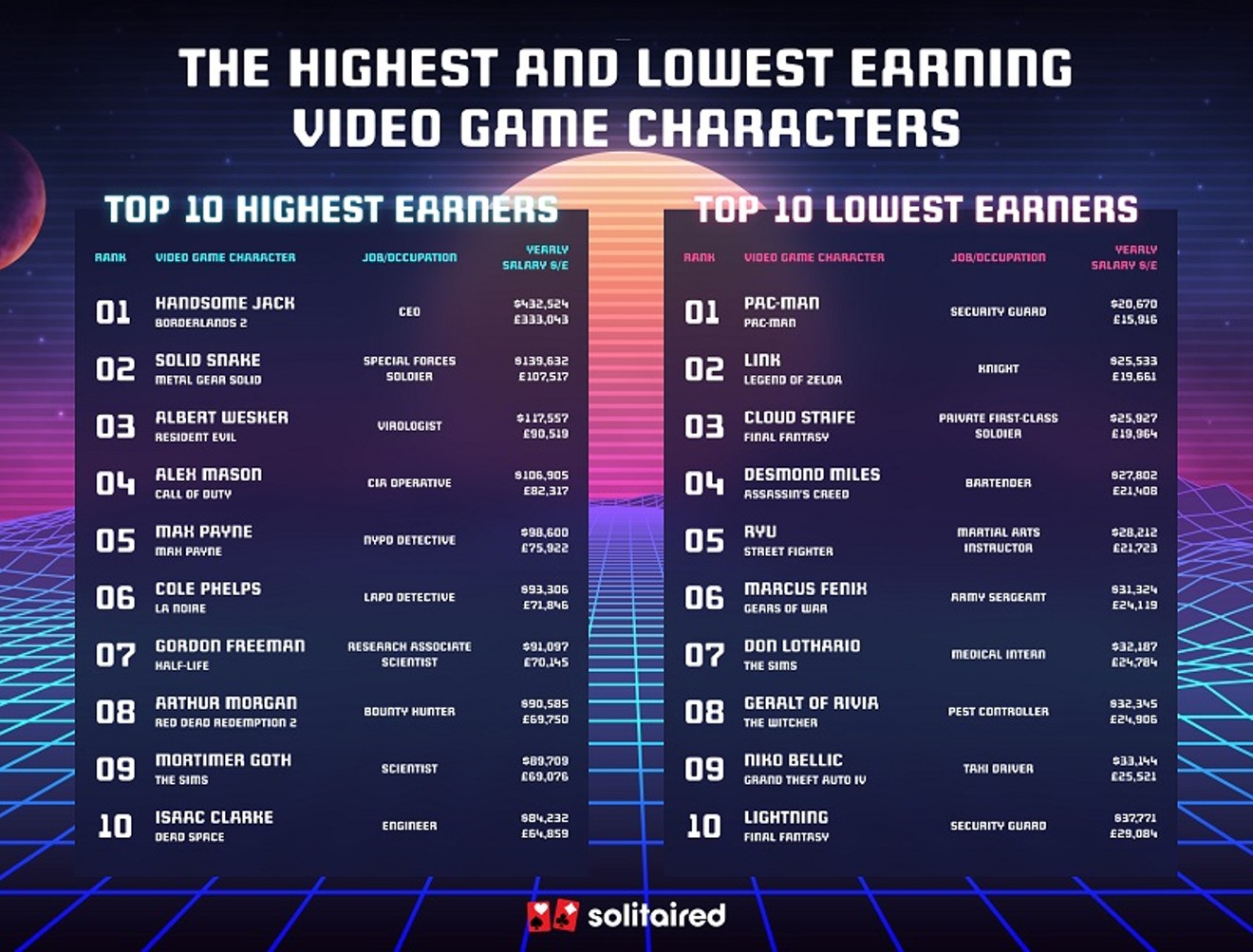 The salaries of video game characters ranked. Infographic by Solitaired.
Video game characters may be the acme of escapism, but most of them do still have jobs within their own worlds. Which ones are paid the most? Online gaming site Solitaired did some number crunching to see who the biggest earner in the gamesphere is.

Their pick for highest earner was Borderlands villain Handsome Jack, the CEO of Hyperion. While it’s impossible to guess what the futuristic economy would actually be like in terms of raw dollars, your average CEO of Jack’s stature earns roughly $432,524. Of course, most CEOs also have big bonuses on top of their actual paycheck as well as stock options, and with Jack known far and wide for his ruthless piracy of everything not nailed down, it’s likely he takes home much more than that.

Though he isn’t mentioned in the Solitaired data, it’s likely that President Shinra of Final Fantasy VII would outpace Jack. The largest electric company in the United States is Duke Energy Corp., and their CEO, Lynn Good, has a compensation of $14 million. Considering that Shinra controls the electricity for most of an entire planet, that number is probably a lowball.

Soldiers also do fairly well by the Solitaired count. Solid Snake of Metal Gear Solid was number two on the list with his special forces salary of $139,632. Shortly behind him is Alex Mason of Call of Duty, who makes $106,905 as an American intelligence analyst in the armed forces. Master Chief (Halo) and Doomguy (Doom), rank more near the middle with roughly $70,000 incomes. On the other hand, rank and file soldiers often do quite poorly. Cloud Strife of Final Fantasy VII makes only $25,000 as a private first class, and as a deserter he probably doesn’t receive a pension or any benefits.

Some characters have to be taken with a grain of salt. For instance, Link of the Legend of Zelda ranks pretty low when you extrapolate the pay of a knight in the Middle Ages (about two shillings a day) to modern times. However, knights were also generally landowners who made most of their money off of the feudal system. Unfortunately, Link is rarely show as having any revenue-generated holdings, so the Hero of Time probably has to get by from what he can get out of smashed pots.

A lot of the more dashing and impressive characters don’t make a lot. Lightning of Final Fantasy XIII makes less than $40,00 as a security guard, Booker DeWitt of Bioshock Infinite makes about $5,000 more as a private investigator, and Ryu of Street Fighter has to make ends meet on $28,000 as a martial arts instructor. Since several of his Street Fighter endings show Ryu not even sticking around for award ceremonies from tournaments, his income is probably not supplemented with prize purses. On the other hand, it’s not like he has to buy shoes, so he saves money there.

Of course, salary isn’t everything. Tomb Raider’s Lara Croft makes $54,690 working as a British archaeologist, but she regularly ranks as one of the wealthiest fictional characters of all time thanks to her family’s ancestral wealth. Super Mario would make $41,000 as an Italian plumber but seems to do much better as an official agent of the Mushroom Kingdom’s royal family. Plus, he doctors on the side, unless that’s actually his dad.
KEEP THE HOUSTON PRESS FREE... Since we started the Houston Press, it has been defined as the free, independent voice of Houston, and we'd like to keep it that way. With local media under siege, it's more important than ever for us to rally support behind funding our local journalism. You can help by participating in our "I Support" program, allowing us to keep offering readers access to our incisive coverage of local news, food and culture with no paywalls.
Make a one-time donation today for as little as $1.