Sex and Violence: Just Another Night at the Opera With Tosca 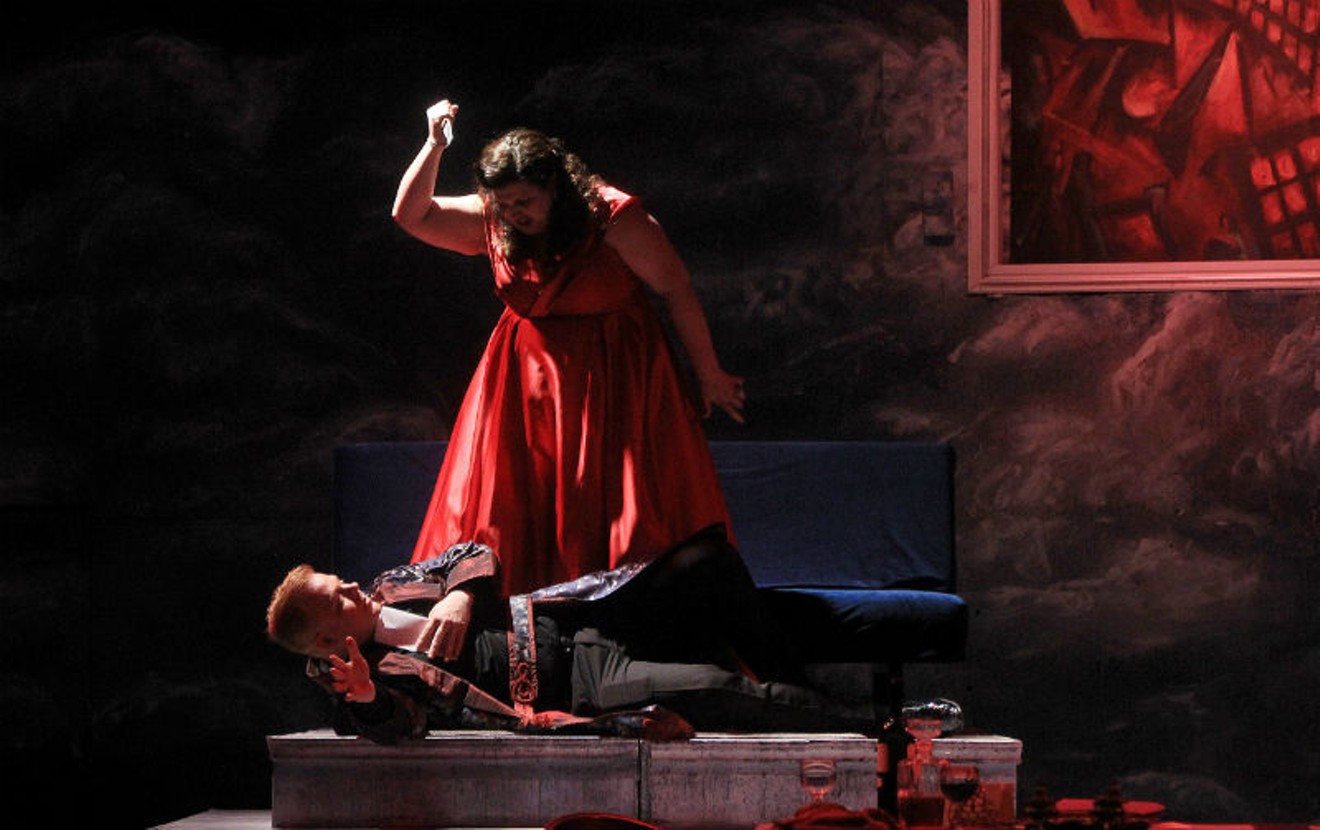 Elizabeth Baldwin as Tosca and Kenneth Stavert as Scarpia. Photo by Pin Lim

Giacomo Puccini's verismo-fueled Tosca (1900) runs on opera's highest octane – sex and violence. It speeds along, no time for detours, spinning its tale with a breakneck pace. Co-librettist Giacoso complained to the composer that there was nothing but plot, but Puccini knew exactly what he was doing when he secured the rights to Sardou's scandalous melodrama that had been written expressly for theater's great diva, Sarah Bernhardt. He knew a great story when he saw one. He urged his librettists to prune, cut, revise and get to the meat.

He got what he wanted. No filler or fat, just juicy theater. Puccini even considered cutting Tosca's Act II's plea to God asking why He had allowed her to get into this compromising position, “Vissi d-arte” (I lived for love), because it stopped the flow of the story. Thankfully, he relented, and the aria became one of the most beloved, signature pieces in all opera.

Light on spectacle, and with a greatly reduced orchestra and chorus, Opera in the Heights presents a highly-charged Tosca that roars down the highway on all cylinders. It's more intimate, for sure, which deepens the characters and pulls us right into the story. Thanks to Puccini, everything's so compact and elemental, the plot happens over a 24-hour period. Tosca is tightly-wound.

Opera diva Tosca (soprano Elizabeth Baldwin) loves painter/political firebrand Cavaradossi (tenor Peter Scott Drackley). She is insanely jealous and assumes he's having an affair behind her back. High maintenance, she is easily manipulated by odious police chief Scarpia (baritone Kenneth Stavert), who's out to crush the underground revolutionary movement in which he suspects Cavaradossi plays a major part. The painter has indeed abetted the revolution's leader.

Scarpia's other motive is less political, he lusts after Tosca. As he sings in Act II, his credo is, to paraphrase, “so many women, so little time.” He arrests an unrepentant Cavaradossi, commands Tosca to appear at supper, and proceeds to torture the painter in her presence. Tell me what you know, he coolly seduces, while Cavaradossi screams from his cell. She pleads with the sadist for her lover's life. “Quanto? Quanto?" How much, she demands. “You” is his answer. Submit to me and I will let your lover go free. She's in love, what can she do? He writes out a safe passage for them, but he must pretend to kill the painter to allay suspicion. She relents. Scarpia rushes to embrace her. “Here is Tosca's kiss,” she howls, stabbing him with his own dinner knife.

Dead though he may be, Scarpia's malicious influence infects the lovers. Cavaradossi's mock execution turns out to be the real thing. Swearing vengeance before God, Tosca leaps from the battlements instead of being captured by Scarpia's thugs. At the curtain, all three principals are dead.

In every good melodrama, good intentions don't always prevail, fate intervenes in horrible ways, and irony raises its mocking face. Tosca has all of these, heightened into the opera pantheon by Puccini's lush chromaticism, his musical impressionism, his unerring sense of matching theatricality to music. For all the plot's cholesterol, Tosca's music seduces. Not many other operas can boast such a sparkling array of hit tunes: Cavaradossi's two stellar arias, “Recondita harmonia” (Strange harmony) and “E lucevan le stelle” (The stars were shining); Tosca's “Vissi d'arte;” the glorious processional, “Te Deum,” that chillingly contrasts against Scarpia's lust; the joyous “Vittoria!” that Cavaradossi and Tosca belt out to defy Scarpia. No wonder this is one of the world's most popular works.

It's difficult to be subtle in Tosca. It's too primal, too grand, too Technicolor. It's just how we like it.

Baldwin manages to portray this larger-than-life diva with surprising variety. She has a voice of steel, powerful and able to pierce through any thick orchestration, and yet capable of melting in ardor when in her lover's arms. Tosca has pride and vanity, but still has a heart of gold, naturally. And Baldwin shows us all this with her rich, deep soprano, with that perfect pitch and ability to land any high note without showing any effort at all. She's a fine actress to boot, even though it's difficult to swan about the small Lambert Hall stage. Scarpia's murder is beautifully handled (piercing red lights to punctuate her knife thrusts) – another apt touch from director Leslie Swackhamer) — and she even does a nifty suicide leap off the parapets. A trooper with shining voice.

While tenor Drackley showed no sign of effort in his treacherous tessitura, he wasn't the most ardent of suitors. His booming voice sounded slightly reedy in the higher range, but he warmed up considerably in the third act, where Cavaradossi's at his wit's end, all hope gone. His plangent “E lucevan” was the very model of phrasing and emotion.

But it is Stavert who stole the show. Without a malevolent Scarpia, there's no drama, and Stavert delivered in spades. Trim and schoolboy handsome, his Scarpia exuded creepiness, like a former choirboy twisted in adulthood by absolute power and unleashed inner demons. It's refreshing to see a Scarpia the same age as Tosca, instead of an old baritone playacting a lecher.

The sexual dynamic between them was definitive, the tension palpable. It was a grand night for theatrics with these two going at it over dinner. At one point in their negotiations, he grabbed her from behind and forced her to the table. You could hear the audience draw in their collective breath. It was just the type of toxic gesture a young Scarpia would do to show his utter disregard for women. Stavert played it brilliantly, but, even better, sang it brilliantly. Listen to his magnificent “Te Deum,” spitting out “Go, Tosca,” knowing full well she won't get far, as Puccini ramps ups the tension, audaciously mixing the chorus' religious fervor with Scarpia's full-blown eroticism. If there's a young baritone on the cusp of stardom, if the opera gods are favorable, it should be Kenneth Stavert.

Guest conductor Sameer Patel led a spirited performance from the intimate ensemble, rising to full mezzo forte then falling gently to allow Puccini's glimmering clarinets and harp and horns to shine like moonlight. The percussion and timpani were especially expressive. And mention should be paid to bass-baritone Jason Zacher for his fierce revolutionary Angelotti (more of him, please); bass-baritone Jorge Belonni for roundly depicted Sacristan; and tenor Benjamin Boskoff for thug Spoletta.

Tosca is a war-horse, no doubt about it. It's concise, condensed, decocted to its essence. Yes, melodramatic; yes, over-the-top; yes, crazy wild. But it deserves its accolades as one of the most beloved of all operas. Sometimes subtlety needs a good swift kick. Puccini knows just where to kick.

Note: The Ruby cast (soprano Victoria Cannizzo, Tosca; tenor Gerardo Gaytan, Cavaradossi; baritone Ivan Conrad, Scarpia) performs October 6 and 12.
KEEP THE HOUSTON PRESS FREE... Since we started the Houston Press, it has been defined as the free, independent voice of Houston, and we'd like to keep it that way. With local media under siege, it's more important than ever for us to rally support behind funding our local journalism. You can help by participating in our "I Support" program, allowing us to keep offering readers access to our incisive coverage of local news, food and culture with no paywalls.
Make a one-time donation today for as little as $1.