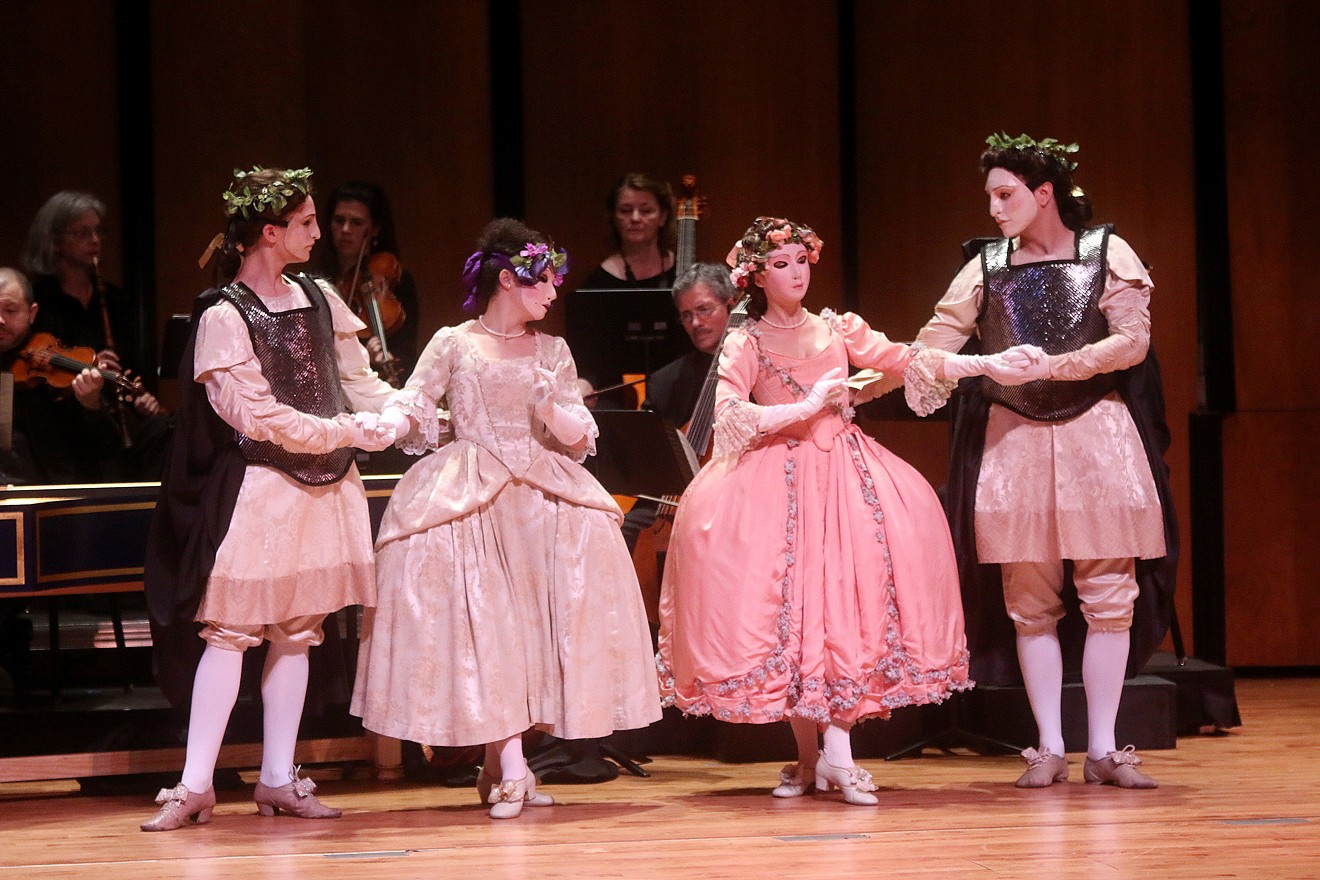 Ars Lyrica and the New York Baroque Dance Company in Homage to the Sun King in 2015. Photo by Pin Lim
In 1674, Jean-Baptiste Lully's Académie Royale de Musique (or the Paris Opera, as we all know it) moved out of its decrepit tennis court home for the palatial Palais-Royal, where a tableau of Apollo crowning Music’s muse signaled the monarchy’s commitment to the art form.

For Ars Lyrica’s season-opening program, Dancing at the Palais, Artistic Director Matthew Dirst and his ensemble performed an evening of suites from two operas that premiered at the Palais Royal: André Campra’s Hésione and Jean-Philippe Rameau’s Les Indes galantes. And they had a little help. In addition to performing Baroque-era music on Baroque-era instruments, the New York Baroque Dance Company came to town to add a few Baroque-era moves to the festivities, too.

The program opened with three suites from Campra’s tragedie-lyrique, Hésione, which premiered at the Palais-Royal in 1700. Through a prologue and five acts, the titular princess, in love with Anchise, catches the eye of the King of Salamis, who in turn gets a little help from the goddess of love herself, Vénus, in an effort to break up the happy couple. Oh, and there's a sea monster in Antoine Danchet’s libretto, too.

It quickly became clear during the first suite that Dirst both leads the ensemble from the harpsicord as conductor and anchors them with his playing. He sets a welcome, no-nonsense pace, yet still allows room for the natural ebbs and flows of the music.

The first suite featured music from the prologue and the second act, and gave the audience their first look at the lavishly costumed New York Baroque Dance Company. NYBDC Artistic Director Catherine Turocy and Caroline Copeland coached the dancers in the original, reconstructed choreography by Guillaume-Louis Pécour. The Air des Saliens, with dancers Carly Fox and Julian Donahue, seemed to come and go like a bolt of lightning, a short, but bright piece enhanced by percussionist Craig Hauschildt’s tambourine.

The second dance number of the first suite, during the Air des Graces, featured Julia Bengtsson and Brynt Beitman. The two benefited from a more flat-footed approach that led to an even livelier dance punctuated with small hops and jumps. More than anything though, they impressed with their connectedness, both to each other and the audience.

The Passacaille ended the first suite with a bit of banter between the strings and the woodwinds, while Suite II, consisting of pieces from the show’s first act, included the Air des Troyens, which gave the string section a chance to show off their nimble fingers even more.

The third suite, which included music from the third, fourth and fifth acts, opened with Tempeste, the name of which gives away its unrelenting, almost frantic dynamic. Other highlights included Wes Miller’s heroic natural trumpet during Marche du Triomphe and the stately orchestration in the Air des Romaines. The real treat, however, was the performance of the Aimable Vainqueur during the Second Air des Ombres des Amants fortunes.

The Aimable Vainqueur was the most famous 18th-century ballroom dance and was performed before Louis XIV in 1701. Fox returned to the stage with Alexis Silver for the light, airy choreography, which included such fluidity of movement, from the delicate rolls and twists of their wrists to the gentle sweep of a foot across the floor. Like the dances before it and the Troisieme Air: Rondeau with Silver and Matthew Ting that followed, it was marked by precision, mirroring, and symmetry. 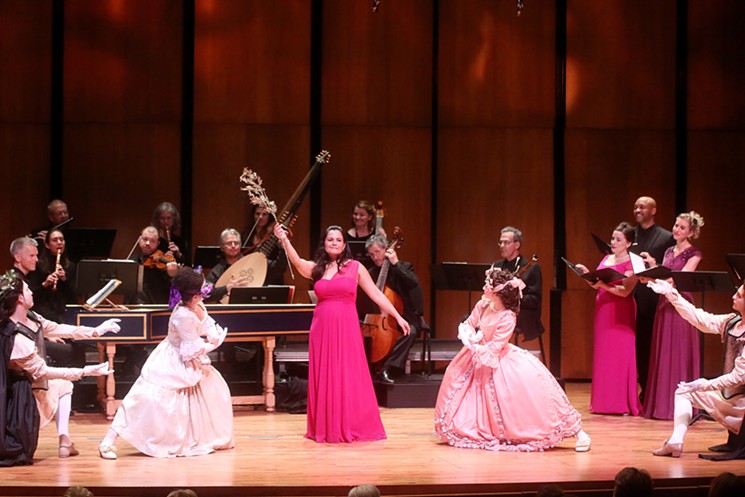 Ars Lyrica and the New York Baroque Dance Company in Homage to the Sun King in 2015.
Photo by Pin Lim
The second half of the program dove right into Rameau’s first hybrid opéra-ballet, Les Indes galantes (The Amorous Indies). An anthology of sorts, Les Indes galantes premiered at the Palais-Royal in 1735 and consists of a prologue and four acts, each its own little self-contained love story.

The first of three suites, the Premier Concert, was essentially Rameau’s prologue, which sees Hébé, the goddess of youth, and L’Amour give up on the war-focused peoples of Europe and set off to find love in lands far away. Though the suite began with the grand, spectacle-promising Ouverture impressively played by the ensemble, the section was owned by the dancers.

Still decked out in lavish costumes but with a couple of accoutrements in hand, the company returned to the stage for Entrée des quatre Nations dans la cour d’Hébé and stayed for the remainder of the suite. Particularly fun moments throughout included playful hits to the tambourine Fox carries; the unexpected and delightful lifts from Bengtsson and Beitman during Air Polonois; and the precision of Donahue in the briefest of solos and Silver’s crowd-enticing sweeps of a fan in Menuets I & II.

Following the prologue, Rameau and librettist Louis Fuzelier go on a trip around the world, peddling benevolent exoticism as they go. On an island in the Indian Ocean, a Turkish officer gets a chance to practice that old adage about how if you love something, let it go regarding a French hostage. In Peru, a high priest enlists the help of a volcano to try and stop an Incan princess from running away with a Spaniard. And in Persia, where the program picked up again for the second suite, or Second Concert, a woman suspects her husband is cheating on her. And it’s here, drawing from the Les Indes galantes’ third act, Les fleurs (The Flowers), that the Ars Lyrica ensemble stole back the spotlight.

Hauschildt’s resonant timpani part opened the suite, undergirding Air pour les Guerriers and making it, well, fit for a warrior or two. The sweetness of the Premier Air des fleurs can be traced to the violins, triangle and traverso. The traverso, played by Colin St-Martin, is given some absolutely charming melodies in Air tendre pour la Rose, Premier Air pour Zéphire and Air vif pour Zéphire et la Rose, while the strings shine on Air pour Borée et la Rose, with Richard Savino’s Baroque guitar adding an extra depth to the piece.

The fourth entrée, les Sauvages, a second-production addition that has become the work’s most famous excerpt, was up next. In it, a First Nation princess, Zima (Fox), wishes to marry First Nation Chief Adario (Beitman) and spurn the attention of a Frenchman (Donahue) and a Spaniard (Ting). Adorned with feathered skirts and headdresses, the dancers returned to the stage for plenty of rhythmic stepping, particularly in the almost celebratory Danse du grand calumet de Paix.

Because no notation survives, Turocy created the theatrical choreography for Les Indes galantes. Here, and throughout the program, it’s easy to see how Baroque dance serves as a precursor to modern ballet. Though “stripped down,” if you well, the moves are there – an extension, entrechat, jeté, chassé, pirouette, even a bit of a fouetté.

Ars Lyrica is essentially a time machine, and by teaming up with the New York Baroque Dance Company for their season opener, they doubled down on their mission statement to great success. By continuing to perform music from the 17th and 18th century on period-specific instruments, the well-polished ensemble is not only bringing history to life (if but for a brief evening), they are transporting their audiences to another world, one that is familiar yet quite different.

Dancing at the Palais was September 20 at the Hobby Center for the Performing Arts. For more information about Ars Lyrica’s upcoming season, please call 713-622-7443 or visit arslyricahouston.org.
KEEP THE HOUSTON PRESS FREE... Since we started the Houston Press, it has been defined as the free, independent voice of Houston, and we'd like to keep it that way. With local media under siege, it's more important than ever for us to rally support behind funding our local journalism. You can help by participating in our "I Support" program, allowing us to keep offering readers access to our incisive coverage of local news, food and culture with no paywalls.
Make a one-time donation today for as little as $1.