Before he penned The Odd Couple, playwright Neil Simon wrote about another mismatched duo: newlyweds Paul and Corie in Barefoot in the Park. Shown: Scott McWhirter and Samantha Walker Photo by Matt Prideaux
When you're euphoric and giddy with love, you want everybody to feel just as happy. And so after a six day honeymoon it's no wonder newlyweds Paul and Corie want to play matchmaker. But you know what they say about the best-laid plans; they never seem to work out as expected and soon her mom and their upstairs neighbor get roped into the shenanigans. And so sets up Barefoot in the Park, the classic farce by prolific playwright Neil Simon coming to Theatre Southwest.

So can a play written in the kinder, gentler era of 1963 — and later made into the 1967 film with Robert Redford and Jane Fonda — hold up in front of modern audiences? "It’s all in the pacing of the show. If the show's not paced thoughtfully it will fall flat," says David Hymel, who is directing.

Written a couple of years before The Odd Couple, Simon creates conflict not only by the introduction of other characters, but also through the differing personality types of the young couple. "You could see that in a lot of ways. He being Felix, her being Oscar, more free-spirited," says Hymel. "There's a definite character correlation there between these two [plays] for sure." 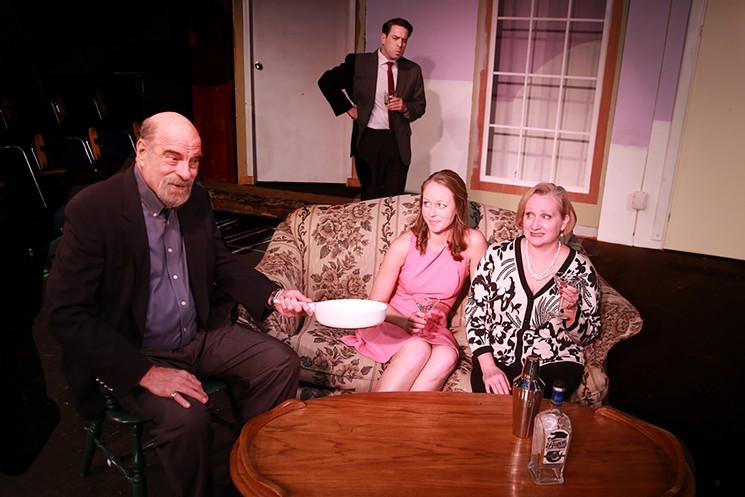 Carl Masterson, Samantha Walker, Crys Hymel and (background) Scott McWhirter — all veterans of Festival of Originals — are taking the stage again in Barefoot in the Park.
Photo by Matt Prideaux
Casting of the play is sort of an informal reunion of previous Festival of Originals, Theatre Southwest's annual array of one-act plays; they've all either acted, directed (or both) in past iterations. Scott McWhirter plays Paul, Samantha Walker is Corie, Crys Hymel is her mother and Carl Masterson is their neighbor in the attic, Velasco. As for the telephone man, they've cast J. Eric Dunlap in the role. "The first night of auditions there was no question who was going to get that role. He absolutely nailed it in auditions," says Hymel.
Hymel says he's tapped often to direct farcical comedies, as well as other works by Simon, but that directing this play also called to him on another level. "I’ve got a bit of a connection to Barefoot in the Park, going way, way back to my high school days. I did a lot of acting competitions in the school system, I did the Corie and Paul fight scene in competition with my partner; she has gone on to become a professional actress in film and theater," says Hymel, about actor Patricia Clarkson. "I have a bit of connection to that scene, that play."

While they're still working out the logistics of snow effects and having someone fall through a skylight, they know exactly how opening night is going to play out. "Theatre Southwest does its anual New Year's Eve gala celebration wrapped around a show. We open the doors at 7:30 p.m. and the show goes up at 8:30 p.m. We have hors d'oeuvre and things being served to audience members and, during intermission, we roll out a full fledged meal and we have door prizes," says Hymel. "Afterwards we clear the stage and we have music and dancing. We ring in the new year. I think it's probably the best bargain in town."

Barefoot in the Park is scheduled for 7:30 p.m. December 31, continuing 8 p.m. Fridays and Saturdays, 3 p.m. Sundays, January 4-19, Theatre Southwest, 8944-A Clarkcrest, 713-661-9505, tswhouston.org, $17 to $19, ($45 to $55 on December 31).
KEEP THE HOUSTON PRESS FREE... Since we started the Houston Press, it has been defined as the free, independent voice of Houston, and we'd like to keep it that way. With local media under siege, it's more important than ever for us to rally support behind funding our local journalism. You can help by participating in our "I Support" program, allowing us to keep offering readers access to our incisive coverage of local news, food and culture with no paywalls.
Make a one-time donation today for as little as $1.