Escape to the forest of Arden with As You Like It, part of this year's Houston Shakespeare Festival. Photo by Pin Lim
All the world's a stage, and this weekend the men and women are playing. We've got world-class Shakespeare at Miller Outdoor Theatre, nine raucous world premieres in Spontaneous Smattering, and White Linen Night in the Heights. Plus head over to NRG for high-tech at the Abilities Expo and Jurassic Quest's massive and terrifying animatronic dinosaurs. 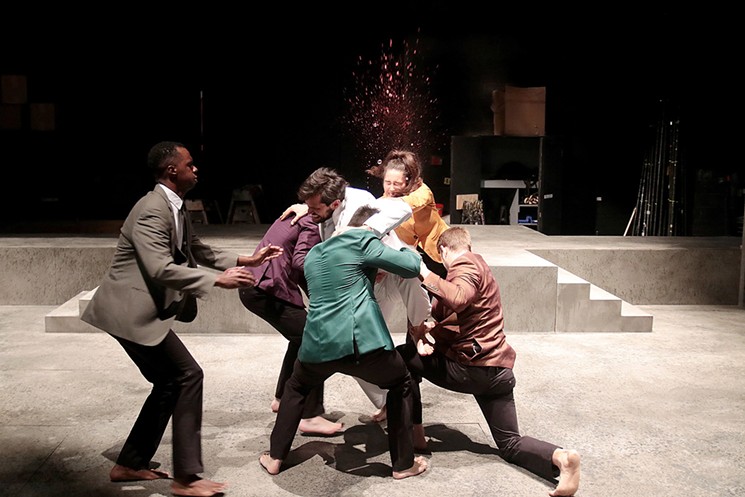 A contemporary Julius Caesar opens this year's Houston Shakespeare Festival.
Photo by Pin Lim
Conspiracy theories, a leader who just might hold too much power, and whispers of a coup? No it's not headline news; this political thriller is straight from the mind of William Shakespeare and Julius Caesar is the opener for this year's Houston Shakespeare Festival, presented by the University of Houston Department of Theatre & Dance. HSF artistic director Jack Young transports Roman intrigue to a contemporary world where the empire spirals furiously out of control. The tragedy is being performed in repertory with As You Like It, one of the Bard's most beloved comedies, directed this year by Stephanie Shine. This perennial festival is celebrating its 45th season this year so, if you've never seen world-class theater on the hill, now's your chance.

Test drive those rides at the Abilities Expo.
Photo by Scott Stone, Abilities Expo
We can all use a little help every now and then, but rarely is that assist as cool as the high-tech gadgets at the Abilities Expo. Test drive the Jazzy® Zero Turn, an innovative travel scooter with patent-pending iTurn Technology™. Learn a new sport and flex those muscles with the adaptive climbing wall, wheelchair rugby and adapted tennis, or get some attention during the mock cosplay competition. From info about sign language and service dogs, and from pain medication to medical marijuana, this is the place to get those questions answered. And artsy folks will want to join the Houston Ballet for a dance class this Sunday.

The Abilities Expo is scheduled for August 2-4 from 11 a.m. to 5 p.m. Friday and Saturday, 11 a.m. to 4 p.m. Sunday at NRG Center, One NRG Park. For information, visit abilities.com/houston. Free. Bring $15 cash for parking.


There aren't enough exclamation points to describe Jurassic Quest. Interactive baby dinos! Walking dinosaurs that run around and make people cheer! Full-size giant animatronic dinosaurs that are massive, terrifying and fierce! Plus all sorts of dinosaur activities: fossil digs, science stations, dino rides and even a dino-themed bounce house. Active duty police, firefighters, paramedics, military and their families save $2 per ticket with ID.

Cylis Wilson and Dano Colon in a scene from Greek Is the Word: A Period Piece Mash-Up Musical Extravaganza!
Photo by Jonathan Moonen
No pressure whatsoever. Spontaneous Smattering XIII: Smatterday the 13th begins Friday night when nine writers are assigned actors and a few parameters and are given 13 hours to write a script. Sleep is optional; delivering a presentable play is mandatory. Ready or not, those scripts get handed off to directors at 8 a.m. who have to block, rehearse, scrounge for props and put on a show by 7 p.m. What could go wrong? Usually something, sometimes everything, but audience members won't mind because a shot of alcohol is waiting at the door, the laughs are guaranteed, and the event benefits the Houston Food Bank. Then cast your vote for Best Use of Genre, Best Use of Prop, Best Actor/Actress and the highly-coveted Best In Show. Spontaneous Smattering is co-presented this year by Cone Man Running Productions and Company OnStage.

Performances are scheduled for August 3 at 7 p.m. and 9:45 p.m. Saturday at Company OnStage, 4930 West Bellfort. For information, visit conemanrunning.com/coming-next-tickets. $20. Donation of canned good or nonperishable item nets $1 off the ticket price, limit five.

Uber is the official ride of White Linen Night. Pick up and drop off are at the corner of Ashland and 20th.
Photo by Yuri Peña
From a tradition rooted in the French Quarter's arts district, Hurricane Katrina transplants Chris and Kay Thayer started White Linen Night in the Heights more than a dozen years ago. With our hot Houston summers, wearing white is a natural, and the event has grown over the years to include photo booths, shopping discounts, light bites and live music. Plus art aficionados will appreciate that both the First Saturday Arts Market and The Market at Sawyer Yards are participating. Purists will argue that White Linen Night in the Heights is officially along the 200-300 blocks of 19th Street, and they're right, but that doesn't stop adjacent streets from catching the party fever and doing their own linen-y things this Saturday night. Let's just say you'll know when you get close.

White Linen Night in the Heights is scheduled for August 3 from 6-10 p.m. Saturday along the 200 and 300 blocks of 19th. For information, visit theheightswhitelinennight.com. Free admission.
KEEP THE HOUSTON PRESS FREE... Since we started the Houston Press, it has been defined as the free, independent voice of Houston, and we'd like to keep it that way. With local media under siege, it's more important than ever for us to rally support behind funding our local journalism. You can help by participating in our "I Support" program, allowing us to keep offering readers access to our incisive coverage of local news, food and culture with no paywalls.
Make a one-time donation today for as little as $1.