Houston Grand Opera is premiering El Milagro del Recuerdo, the prequel to Cruzar la Cara de la Luna. Photo by Felix Sanchez
Funny and festive, blissful and sweet, this weekend offers more than a few of our favorite things. There's a mariachi opera, comedy on stage, Latin-inspired music, a marathon monologue from Jay Leno, a gingerbread build-off (in space!), a homecoming of sorts over at the Houston Ballet, and a return to Victorian London along The Strand in Galveston. Keep reading because you won't want to miss any of it.

The operaphiles in Paris are known for their quiet reserve. When rehearsals first began there for Cruzar la Cara de la Luna (To Cross the Face of the Moon) — the first mariachi opera in the world — the cast was warned that Parisians just wouldn't applaud after each song. Wrong and wrong. It turns out that the opera's narrative about the immigration journey, what is left behind and what the future holds, rings true not only for those who hail from Mexico, but also for people from all over the world including Kenya and Italy. For those left wanting to know more about the story's main characters, Houston Grand Opera is premiering the prequel to that opera, El Milagro del Recuerdo (The Miracle of Remembering), a one-act mariachi opera that tells the bittersweet story of how life in poverty begins to change once a family member has traveled north for work. HGO studio artist Daniel Noyola sings the role of Laurentino, mezzo-soprano Cecilia Duarte is his first wife Renata, and mariachi mezzo-soprano Vanessa Alonzo is her friend Lupita. Sung in Spanish with projected English translation. Read our preview here. Experience Dickens on The Strand as a Victorian lady or gent.
Photo by Illumine Photographic Studio
Immerse yourself in 19th-century Victorian London during Dickens on The Strand, an annual festival in Galveston that celebrates English writer Charles Dickens with appearances by some of his descendants (Lucinda Dickens Hawksley, Jane Dickens Monk, Oliver Dickens), parades, bed races, entertainment on four stages and — new this year — Tiny Tim's Play Land and the Shopkeeper Skills Village. True Anglophiles will want to secure tickets to premium events like a champagne reception, handbell concerts, a sunset cruise on the tall ship Elissa, or the brewtastic walking tour with Saint Arnold Brewing Company. Insider tip: Attendees in Victorian costume are admitted for half price; click here for suggestions about how to dress. 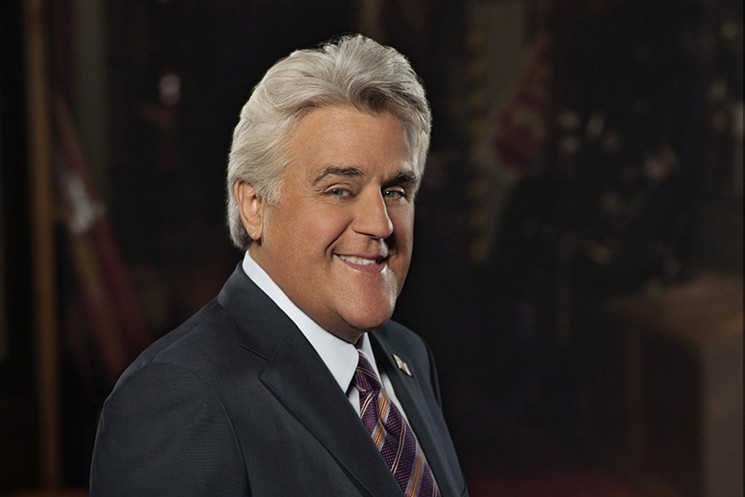 Jay Leno is known as “the hardest working man in show business.”
Photo by Mitchell Haaseth/NBC, courtesy of SPA
Were Jay Leno not so stratospherically famous, it would just be a lot of fun to simply hang out with the guy. There's his passion for cars and motorcycles, the fact that he pays it forward by running an eco-friendly green garage and participating in charity events, and knowing that his wife is a huge defender of human rights. But there won't be any hanging out at a backyard barbecue because he is world famous — and rightfully so with two decades hosting the top-rated The Tonight Show with Jay Leno and performing more than 100 stand-up shows a year — and now the strong-jawed funnyman touches down in H-Town for one night only, courtesy of Society for the Performing Arts. Start your holidays off right during An Evening with Jay Leno, with joy, comedy and a marathon monologue that borrows from headline news and is guaranteed to deliver more than a few smiles. Artists of Houston Ballet rehearsing rehearsing Stanton Welch’s Tarantella.
Photo by Amitava Sarkar, courtesy of Houston Ballet
Smiles are just about guaranteed when the Houston Ballet presents one glorious evening of pure ballet bliss during the 15th annual Margaret Alkek Williams: Jubilee of Dance. This year's showcase also has a nice tie-in to the Houston Ballet's 50th anniversary, with Act I leading us through a mixed-media experience that takes us on a trip down memory lane accompanied by projections from Wendall K. Harrington. There's the world premiere of Barre with choreography by Claudio Muñoz to represent the formation of the school; Paquita in remembrance of the company's first season at Miller Outdoor Theatre; Peer Gynt, Ben Stevenson's first original concept and choreography; Sylvia to show the company as it is today; and the world premiere of a new work by Welch titled Tarantella that signifies the future of the Houston Ballet. During Act II the dancers will revisit the audience favorite Reflections by Justin Peck with music by Sufjan Stevens, while Act III showcases Welch's Nosotros set to music by Sergei Rachmaninoff.

Da Camera invites the Brentano String Quartet for Mozart and Aucoin.
Photo by Juergen Frank
Imagine you're trying to enjoy an evening out at a restaurant and your dinner partner can't look up from their social media feed long enough to have a decent conversation. What would you give for just a moment of their undivided attention? Modern day problems like these serve as inspiration for contemporary artists and a new work by Matthew Aucoin making its premiere this Friday, courtesy of Da Camera, serves as a commentary on attention as a commodity. Commissioned by Da Camera, Carnegie Hall, Union College Concert Series and La Jolla Music Society, Aucoin's string quartet is composed in three movements that delve into distraction, fixation and focus. The world-renowned Brentano String Quartet (Mark Steinberg, violin; Serena Canin, violin; Misha Amory, viola) will perform the composition and Mozart and Aucoin includes a performance of Mozart's powerful masterpiece, String Quintet No. 2 in C Minor, K. 406/516 (accompanied by violist Hsin-Yun Huang) and Ravel's String Quartet in F Major. 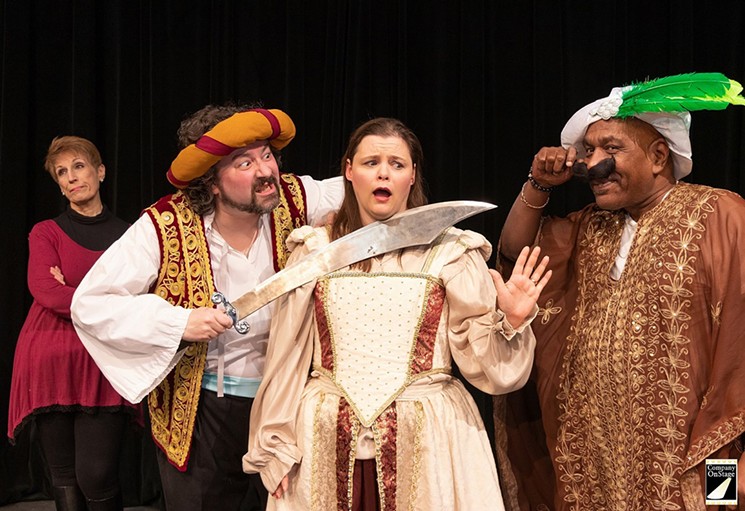 Violence ensues when everything Christmas collides with everything Shakespeare.
Photo by Jonathan Moonen
It's a stage manager's worst nightmare. The actors are off book, the costumes have been fitted, tech week went off without a hitch, and it's opening night for a holiday production of Shakespeare's The Winter's Tale. But there was slime in the ice machine and most of the cast is down and out from food poisoning, leaving a quartet of actors to make sure the show must go on. What could go wrong? Anything and everything in Scrooge Macbeth, a holiday farce of Shakespearean proportions by playwright David MacGregor and presented by The Company OnStage. Come find out why the skull of the court jester is haunting actors Karla Brandau and James West III, and see what Shylock wants from Santa in this mash-up between Christmas and the Scottish play. Soprano Hannah Celeste Lu and mezzo-soprano Cecilia Duarte will perform in A Mexican Baroque Christmas.
Photo by BEND Production
There was great opportunity for cultural exchange in the Americas during the 17th century. Europeans arriving on the continent brought their Baroque-era traditions and were introduced to the Latin hymns written in the vocal polyphonic style by novohispanic composer António de Salazar, as well as New World rhythms and dance. For A Mexican Baroque Christmas, presented by Mercury and conducted by Antoine Plante along with the Houston Symphony Chorus Chamber Ensemble, festive selections that demonstrate this fusion of styles will be presented. The program touches on Salazar's Tarara yo soi Antonio, a del Cielo, and O gloriosa virginum, as well as works by Spanish composer Santiago de Murcia (Canarios, Paysanos, and Fandango), Juan Gutiérrez de Padilla, and Manuel José de Quirós. Dig deeper with a pre-concert lecture at 7:15 p.m. that delves into the vibrant traditions of Spanish and colonial Mexican music. Last year's Grand Prix de Show winner by PDG Architects.
Photo by Rhonda Lowe
The Abominable Snowman took the cake during last year's Architecture Center Houston Gingerbread Build-Off, winning the coveted Grand Prix de Show award for PDG Architects. A special competition category — Gingerbread in Space — has been added to this year's event as a nod to the 50th anniversary of the Apollo moon landing. The teams will begin their creations around 10 a.m. in the morning and guests are invited to view the works in progress and vote on the Public Favorite, while making educated guesses about who the judges will select for Best Architectural Icon, Tallest Standing Structure, Best Houston-centric, and Best Holiday Themed. Food trucks will be on site from 10 a.m. to 4 p.m., there's a visit from Santa from noon to 2 p.m., and the awards will be handed out beginning at 4 p.m. Ryan Kelly and Amy Warren reading Versace by Michal Aharoni.
Photo by Gentle Bear Photography
It's always exciting to experience a new script and Femfest Houston: Voices of Israel is introducing us to a trio of readings making their Houston premieres this weekend. They were all penned by Israeli playwrights, bringing a fresh perspective from another region, and the first play written by Anat Gov has God walking into a psychotherapist's office for some help with his own problems. Elizabeth Keel directs the reading of O God, scheduled for 2:30 p.m. Saturday. Later that evening playwright Hana Vazana Grinwald connects today's immigration challenges with another event from the 1950s, back when thousands of babies vanished from their families. Leighza Walker directs Maternity at 7:30 p.m. Saturday. The series concludes on Sunday with a 2:30 p.m. reading of Versace by playwright and journalist Michal Aharoni, a high-energy comedy that shows how love can bloom even within the witness protection program; Aharoni will be present for a talkback after the reading. Mildred's Umbrella presents these staged readings that are being hosted by the Evelyn Rubenstein Jewish Community Center of Houston and with the support of the Consulate General of Israel to the Southwest.

Femfest Houston: Voices of Israel  is scheduled for December 7-8 at 2:30 and 7:30 p.m. Saturday and 2:30 p.m. Sunday at ERJCC, 5601 South Braeswood Boulevard. For information, call 832-463-0409 or visit mildredsumbrella.com. $5 to $15.
KEEP THE HOUSTON PRESS FREE... Since we started the Houston Press, it has been defined as the free, independent voice of Houston, and we'd like to keep it that way. With local media under siege, it's more important than ever for us to rally support behind funding our local journalism. You can help by participating in our "I Support" program, allowing us to keep offering readers access to our incisive coverage of local news, food and culture with no paywalls.
Make a one-time donation today for as little as $1.