Lawndale Art Center announced four winners of 2018's "The Big Show:" Agnès Bourély for Musica Ficta (L), Sarah Fisher, Matt Manalo and Rajab Ali Sayed for Baptism in Blue (R). Photos by Peter Molick
The odds were in everybody's favor when Lawndale Art Center announced the winners of 2018's "The Big Show." Not only was there less competition this time around — only 53 works by 44 artists — but the prize money was just a little bit sweeter.

French artist Bourély, who paints out of Spring Street Studios, was recognized for her large scale acrylic, a nature-inspired abstract titled Musica Ficta. Both powerful and mysterious, Rajab Ali Sayed's Baptism in Blue held an open narrative: Is that a tumultuous backdrop of nefarious characters or is our fighter holding on for dear life in his mother's womb as the abortionist's crochet hook looms near? 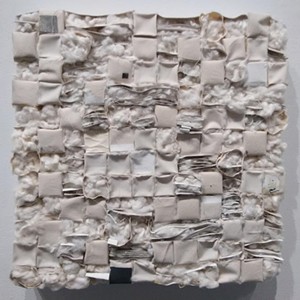 Structure 03 by Matt Manalo, mixed media on panel.
Photo by Susie Tommaney
It was a very good year for Lawndale's annual show, due in no small part to Juror Evelyn C. Hankins, Ph.D., senior curator of the Smithonian's Hirshhorn Museum and Sculpture Garden. After reviewing all of this year's entries, Hankins conducted umpteen studio visits to make sure we saw the best from artists within 100 miles, all created over the past year. The works are impeccably hung in color and tone families throughout the first floor John M. O'Quinn and Gracie R. Cavnar Galleries.

Not taking home the win but still notable in their own way were the playful pen and ink shadow people exercising, in communion, or slinking off in solitude in Hedwige Jacobs' Connect; the modern-day twist on Russian iconography by Karen Eisele in Denunciation and Trinity; and the life gave us a Harvey lemon but I turned my flood-damaged home into art by Page Piland in Harvey Took the Floor.

We did a happy dance viewing Claire Drennan Jarvis's Sprung, a semicircular sculpture fabricated from up-cycled materials in playful lime and apple green fabrics with pops of pink, purple and orange; and wanted to know more about subjects captured on canvas: Quentin Pace's Medusa, Romeo Robinson's self portrait in God's Plan, and the femme fatale in Cedric Ingram's The Chase.

Thought-provoking, large scale pieces in the show included Denise Liebl's Anonymous Was a Woman with its stack of bookmarked tomes about female artists on a lace tablecloth; and the origami meets dinosaur fossil creations by Marie Leterme in #1 and #2 From Folder Paper With Monotype Series creations.

Marcos Hernandez's watercolor study for a flag piece, It Took a Village, was striking; and Deborah Bay's The Meaning of Curvature photograph was the epitome of technical perfection and would fit right in at either an ophthalmologist's office or a contemporary home.

Which brings us to the "what's new" with this year's "The Big Show." For the first time ever, works from the show, or from artists exhibiting in the show, are available through the new Lawndale Lending Library. It's as easy as becoming a member ($100 to $125), attending one of the lending events (December 1, March 9 and June 8) and then borrowing a work of art for a three month period. More than 30 of the artists participating in "The Big Show" are sharing their works through the Lawndale Lending Library, so it's a great way to test drive how the art fits in your space. If you really and truly love it, an auction will be held next fall.

For information about the Lawndale Lending Library, visit lawndaleartcenter.org/support/lawndale-lending-library.
KEEP THE HOUSTON PRESS FREE... Since we started the Houston Press, it has been defined as the free, independent voice of Houston, and we'd like to keep it that way. With local media under siege, it's more important than ever for us to rally support behind funding our local journalism. You can help by participating in our "I Support" program, allowing us to keep offering readers access to our incisive coverage of local news, food and culture with no paywalls.
Make a one-time donation today for as little as $1.