The Vasquez family remembers and honors their loved one with an ofrenda containing photographs, letters and prized possessions. Photo by Agapito Sanchez, courtesy of Casa Ramirez FOLKART Gallery
The best way to honor loved ones who have died is by keeping their memories alive. We're approaching that time of year when it's believed that the heavens open up and the spirits are allowed to come down to visit family and friends on earth. It does take some prompting, which is where personal altar-building comes into play. An ofrenda should be decorated with photographs, memorabilia and your loved one's favorite food and drink, though it can be built in the home, cemetery or in a public place.

Macario Ramirez of Casa Ramirez FOLKART Gallery has been teaching a personal altar building class each Saturday during the month of October. This Heights mainstay also is hosting a Día de los Muertos exhibit through November 11; visitors are welcome to stop by and add the names of their loved ones.

Ramirez has told us in the past that the Day of the Dead is actually a two-day event. “In our country children die early in birth, so that's why there's a heavy emphasis on honoring children on November 1 and adults on November 2."

Don't miss Casa Ramirez's big altar procession and reception on October 27 hosted by Danza Azteca Taxcayolotl. It's a fiesta to celebrate Día De Los Muertos and the reunion with the returning spirits. All are invited to participate, enjoy music by Jesus and Maria Lozano of BOSSA II, and nibble on traditional refreshments.

Ballet Folklórico will perform during MECA's Día de los Muertos Festival, October 27-28. This year's theme is "Honoring Our Past, Celebrating Our Future."
Photo by Pin Lim
For anybody who has been wondering where to find the amazing retablos that have been a longstanding annual tradition at Lawndale Art Center, we've got you covered. Lawndale, in collaboration with Multicultural Education and Counseling through the Arts, has moved the exhibit over to MECA's home turf in historic Old Sixth Ward.

"Retablos31" is curated by Theresa Escobedo and features 200 tins transformed by artists following this year's themes of promises kept or promises made, healing, or devotion to a loved one, saint or higher power. We're always amazed at the creativity that goes into these devotionals, often by established artists, and love how the event doubles as a fundraiser. Don't miss the big "Retablos31" Silent Auction and Closing Party on November 2 with its colorful Calavera Rendezvous (Gathering of the Skulls) celebration.

MECA also is hosting a month-long Day of the Dead Ofrendas/Altar Exhibition through mid-November, with a big opening reception this Friday and a blessing of the altars. More than 25 installation are on display, each "work of the heart" more unique and creative than the next. 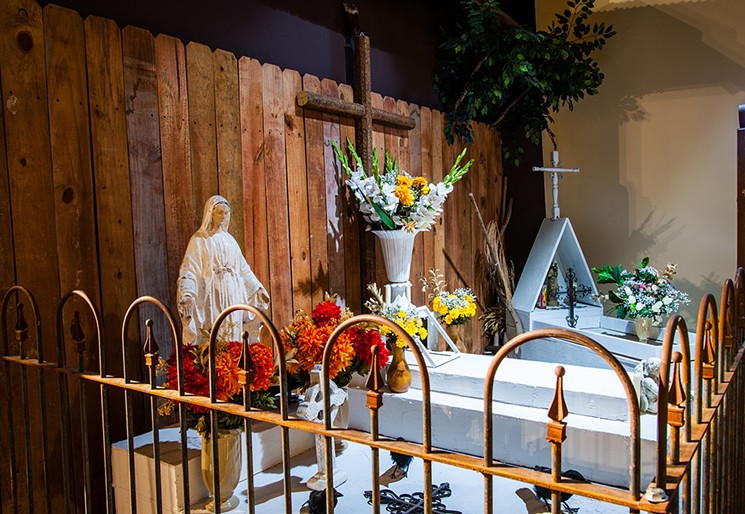 The museum also is hosting a four-day Día De Los Muertos celebration with children's activities, a chance to leave a message in the Book of the Dead, and screenings of Disney's 2017 film, Coco.

The event happens to mark the opening night of the third annual Art @ Discovery Green, an outdoor contemporary craft market that spills over onto Avenida Houston. This year's featured artist is GONZO247 (Mario E. Figueroa Jr.), the man behind The Graffiti and Street Art Museum of Texas.

There's plenty to see and do during the three-day art festival, including crafts (for all ages) presented by the Orange Show Center for Visionary Art. Make a mini art car or plaster and embellish a miniature skull in celebration of Day of the Dead.

1500 McKinney, discoverygreen.com/diadelosmuertos or discoverygreen.com/artfestival.
KEEP THE HOUSTON PRESS FREE... Since we started the Houston Press, it has been defined as the free, independent voice of Houston, and we'd like to keep it that way. With local media under siege, it's more important than ever for us to rally support behind funding our local journalism. You can help by participating in our "I Support" program, allowing us to keep offering readers access to our incisive coverage of local news, food and culture with no paywalls.
Make a one-time donation today for as little as $1.