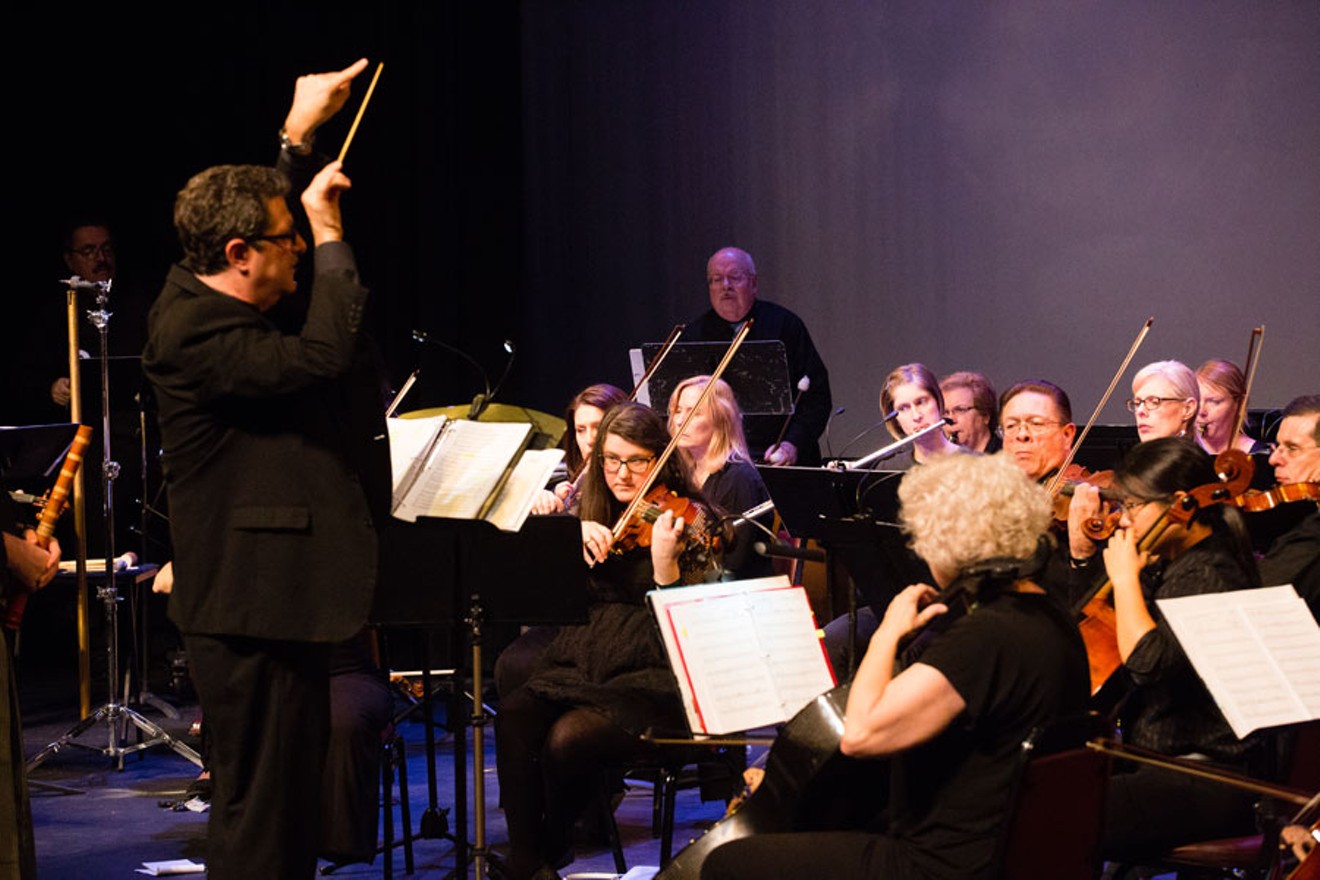 ECHO's orchestra is composed of amateur, retired, professional and semi-professional musicians who perform orchestral music in minimally priced public concerts and events. Photo by Friedhelm Luening
Most people regard the number seven as lucky. But not always. Entering its seventh season, Energy Corridor of Houston Orchestra, otherwise known as ECHO, learned quickly it didn't have luck on its side. It had some hard questions to answer while planning concerts for its upcoming season. The organization, like all performing arts groups, was faced with a pandemic and the challenge of keeping artists and attendees safe while also staying solvent. At the same time, the orchestra remained blood oath-level committed to a mission of providing beautiful, accessible music performed by members of Houston's Energy Corridor in the same area where they live and work. This scenario created quite the conundrum.

The resulting season ECHO planned is a feat forged not from luck but instead engineered out of chutzpah and ingenuity, combining the best of all realistic possibilities: outdoor performances; small, socially distanced chamber productions; online pre-recorded concerts; and hopefully a triumphant return in the spring.

"One of the reasons why we’re doing our very best to deliver music during this time is because we know music is incredibly important to people at all times, but it's especially important during times of adversity. That’s why we wanted to make sure not to stop the music when people need it the most," Musical Director and Conductor Mike Fahey said.

Just like the pandemic forced Houstonians to find creative solutions to problems in all facets of life, ECHO faced the same challenge. The organization is pursuing a solution to the dilemma by splitting the season into two components. The first, labeled as "ECHOes in the Area," offers a variety of chamber orchestra-sized groups playing at outdoor spaces, restaurants and public venues. The second is the programming people have come to know and love throughout the last six years with the full orchestra, albeit in a pandemic-friendly fashion.

What's also new is that ECHO's musical director will do what most directors rarely ever allow: turn creative control over to other members of the organization. Each ECHOes in the Area chamber group will have its own leader selecting music that fits the tenor of the space.

"Instead of me choosing the music for each group, I’m entrusting those decisions with the leaders in ECHOes in the Area to choose the best music for their group and their venue. It’s a nice change because it gives those leaders in ECHO, besides myself, the ability to create programs that will be entertaining and enjoyable for the community," Fahey said. "I’m thrilled to give the other leaders in ECHO more free rein to create those programs."

Small ensembles like this one will dominate much of ECHO's performance lineup this year.
Photo by John Peterson
ECHO's 7th season will include class, a dash of sass, and even a little bit of brass, starting with its season opener on October 25 outdoors at Plaza on the Parkways. Fahey says, "The Carlos Lopez Brass Quartet was chosen for the first concert because of their artistic merit, and the style of music they’ll play is perfect for that location which is outdoors. Brass music works very well outdoors," Fahey said. The concert is free, and the program ranges from Renaissance to early jazz.

The November 29 performance will be led by Fahey, who promises a beautiful mixture of everything from light classics to Broadway to early jazz performed by a string trio. Tickets are $25, which includes a glass of wine and appetizer, and a full menu will be available for noshing. Social distancing will be practiced. The March 22 booking at La Tartine will deliver a clarinet quartet of classic music. Tickets again are $25 and social distancing again will be practiced.

The organization will perform at the Museum of Fine Arts, Houston, likely a partnership enhanced by ECHO's newest staff member, Assistant Executive Director Linda East. Before joining ECHO this summer, East worked at the museum organizing lectures and concerts, which was preceded by her 21 years teaching visual arts in public schools. During the June 5 concert, the Pablo Donatti String Quartet will play 20th and 21st century music in conjunction with an exhibition of art by Vincent van Gogh and David Hockney. One June 19, Lopez returns again to lead a group that will play music to coordinate with a private collection which includes a range of art from antiquities to the present. The price of admission is general admission to the museum.

Rounding out the ECHOes in the Area series, June 19 will display the talents of the Randy Snyder brass ensemble.

For it's regular season, the December 31 "Rockin' NYE" concert, music lovers can purchase a ticket to a pre-recorded virtual program. It will include archival footage of past celebrations. East added that the organization is assembling a raffle for champagne, and the the bottle will be delivered by a tuxedo-wearing courier, just in time for the midnight champagne toast.

ECHO is hopeful to return to having the full orchestra available for its Spring concert at St. John Vianney (date to be determined), and its final planned performance will be outdoors on May 31 at its annual Memorial Day celebration at Memorial Oaks Cemetery.

ECHO's 2020-21 season kicks off at 5:30 p.m. on October 25 at Plazas on the Parkway, 1127 Eldridge Parkway. Future performances take place at various locations throughout the Energy Corridor and Museum of Fine Arts, Houston, 1001 Bissonnet. For information or tickets, visit ECHOrchestra.org. Tickets range from free to $25 for individual concerts.
KEEP THE HOUSTON PRESS FREE... Since we started the Houston Press, it has been defined as the free, independent voice of Houston, and we'd like to keep it that way. With local media under siege, it's more important than ever for us to rally support behind funding our local journalism. You can help by participating in our "I Support" program, allowing us to keep offering readers access to our incisive coverage of local news, food and culture with no paywalls.
Make a one-time donation today for as little as $1.