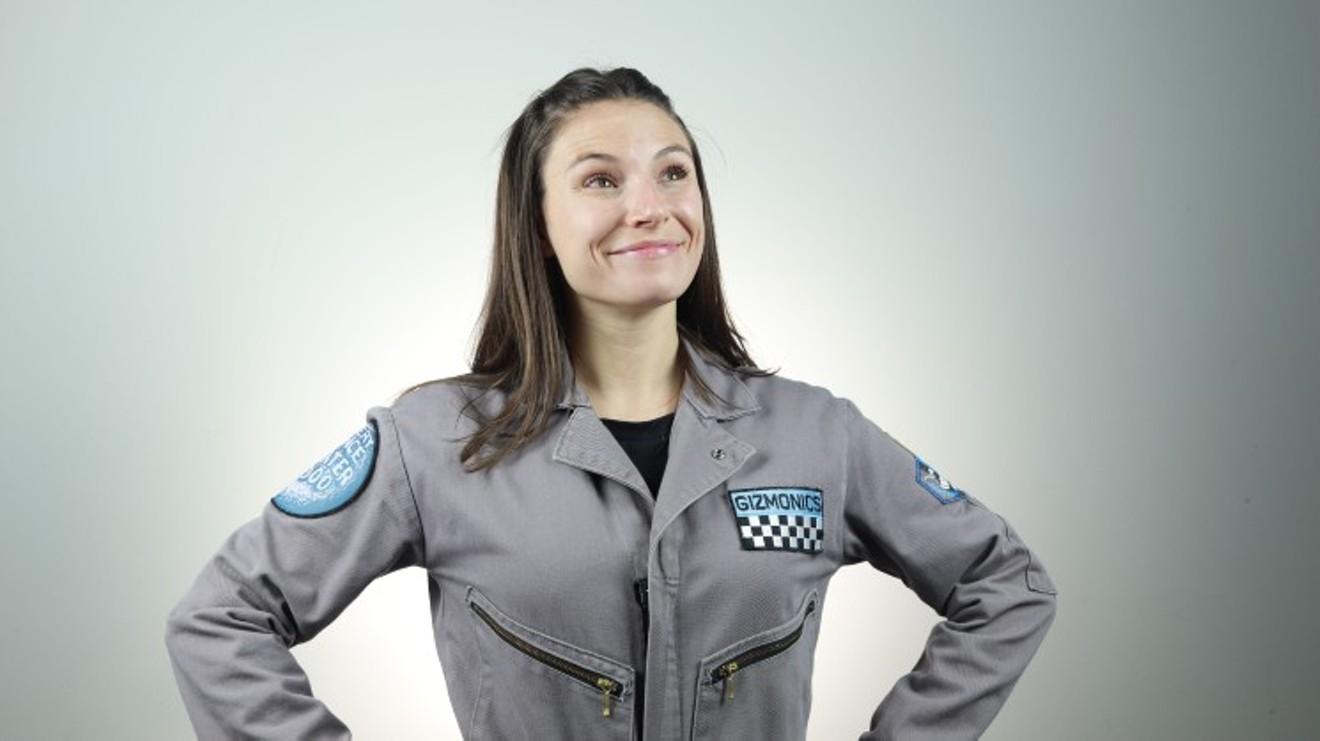 MST3K LIVE's Emily Marsh Photo by Tiffany Byrd Harrison, courtesy of Society for the Performing Arts
Maybe it’s pandemic-think, we suggest to Emily Marsh, but we see something deeply philosophical about Mystery Science Theater 3000, the long-running cult television series which blends puppets, comedy and bad movies together. We tell Marsh, the show’s newest host, we think sitting through a terrible film is akin to facing life’s big challenges. It takes courage, endurance and is best done with lots of laughs shared with good friends.

“What has changed me is realizing the kind of people the show brings out and how kind those people are and just how lucky that is,” Marsh offered. “It’s almost like, if you build it they will come. If you build a fun, light-hearted comedy that is trying to philosophically laugh at even the worst thing, that brings out the best type of people who are fans of this show.”

Fans are expected to join Marsh and the whole “MST3K” crew at Cullen Theater in the Wortham Center for Mystery Science Theater 3000 LIVE’s Time Bubble Tour. The live version of the critically acclaimed TV show lands in Houston Wednesday, January 19. The live event will feature the series’ signatures — silly sketches surrounding wise-cracking robots and their human companion who riff on a very, very bad movie. In this case, the film is 1985’s Making Contact.

“To me, the energy of these shows is very similar to a Rocky Horror Picture Show. People are dressed up, people are wearing shirts from past tours and Etsy shops, you get to see so much cool energy from fans,” Marsh said. “The show is structured like an episode, so it’s sketches, we’re watching a full movie. The thing that’s really nice is it is more theatrical just because we can actually hear the audience, their reactions. We have a scripted show, we have scripted riffs. But another ringing endorsement from Joel, he’s always been like, ‘Hey, whatever works for the audience, if you guys discover something, throw it in.'”

“Joel” is series creator Joel Hodgson, who is supervising the tour which launched late last year and will eventually include more than 60 dates, Marsh said, COVID postponements or cancellations notwithstanding. She stars as Emily Connor, the Gizmonic Institute employee forced to watch bad films as a cruel experiment by mad scientists — aka “The Mads” - on a satellite dubbed the “Satellite of Love.” She’s joined by robot companions Crow (Nate Begle), Tom Servo (Conor McGiffin) and GPC (Yvonne Freese).

Marsh is stepping into Hodgson’s shoes as sort of a triple threat. She's an actor, singer and puppeteer. She worked as a puppeteer in Cincinnati, Washington, D.C. and New York City before she latched onto MST3K a few years ago.


“In 2019, cut to seeing the audition notice for MST3K LIVE and they wanted a singing puppeteer which, at that point, is a kind of unusual combination,” she said. She thought, “Oh my gosh, I know this show so well from my childhood. Also, I can sing really well, also I’ve been puppeteering for the past seven years — this is perfect!”

She joined the live cast for 2019’s Great Cheesy Movie Circus Tour, which was Hodgson’s last live run, as a role player. This time out, she’s the face of the event. She said having his endorsement “means the world.”

“Being on tour with Joel it kind of felt like an everyday sort of little boot camp,” Marsh said of the 2019 run. “’Okay, first it’s like can I deliver a line right in these sketches? And then halfway through the tour it was really kind of him and a huge endorsement when he said, ‘Well, what if I take a bathroom break and you come on and riff for a little bit while I’m out?’ It kind of felt like these escalating challenges. Like, all right, I’ve proven myself in the sketches, oh boy, okay here we go. Let’s try riffing.’”

“Honestly, each step, it meant the world because there’s nothing more terrifying than doing the thing that you looked up to somebody doing your whole life,” she said. “Definitely wonderful! But, also terrifying, in the best way possible. I am now Joel essentially on this tour. Not terrifying at all! Easy!”

Marsh said the 2019 tour ended in March 2020, about a week before the world went into COVID lockdown. Now that some of this tour’s shows are under her belt, we asked if there is an appreciable difference between pre-COVID audiences and these.

“I’ve actually been surprised by how the actual shows themselves have felt like they’ve had just as much energy as when we were last on tour, which I think makes sense. It’s almost like you’re coming back to something with a new appreciation because you had to go without it for so long,” she said. “So that is what has really struck me about the shows. Even some of the smaller houses we’ve done, I’ve thought, ‘Wow, they are laughing!’ Each person is laughing for five people. The energy is palpable with the audiences.” 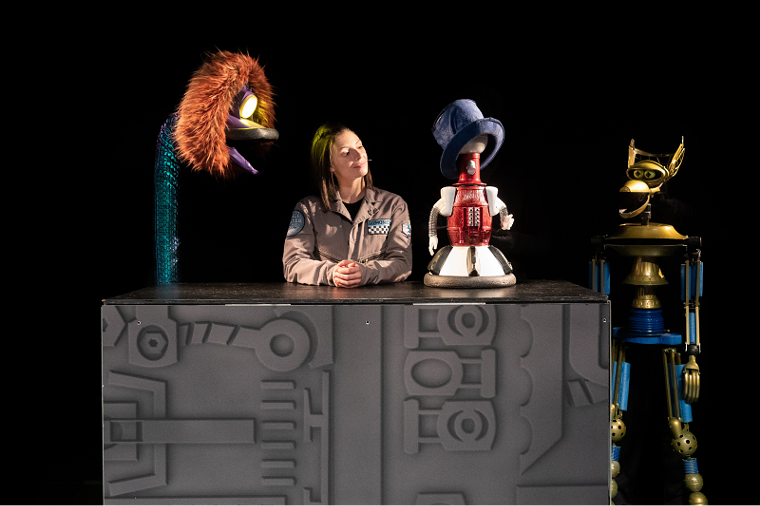 Dedicated fans of the show are called “MSTies” and they’ve kept the show going over the years, from its original run on Comedy Central, to the Sci-Fi Channel, then Netflix and now on the Gizmoplex, a new, online virtual theater MST3K constructed, in part from fans’ Kickstarter donations. Season 13 of the series features 13 episodes, of which Marsh will host four.

“Before we went on tour we filmed my four episodes for the upcoming season. It was lovely. Jonah (Ray Rodrigues), the Netflix host, was directing the episodes, Joel was in the room overseeing a lot of showrunner sign-off. It’s like, okay cool, they’re happy, I’m happy, no matter what inner dialogue you have going on. ‘Is this right? Are we doing this right? They seem happy, okay good.'

“And then we went to the MSTies with rehearsing for the live tour,” she said, noting they were the true bellwether for her chance at success. “In my mind I was like, you know what? Worse comes to worst, they hate me, the boo me and I’ll still love myself and know I tried my best. Worst case scenario I’m just trying my best and we’ll see. And I’ll totally understand if they weren’t a fan of my flavor of the month.

“But what I did not expect has been the opposite, where people have been so supportive, with so many MSTies reaching out through social media or reaching out via e-mail. It’s been great. It’s been honestly the kind of thing that makes you very verklempt, over and over again,” she said. “It’s really for them, so to have people reach out and say they really enjoyed the show and are happy that I’m a part of this tour and show has meant the world. It’s crazy.”

Also crazy, just how much the MSTies love the puppet robot characters. While the human hosts have changed over the years, Crow, Tom Servo and GPC have remained the same, even when played by different actors.

“They’re almost like these agents of chaos,” she said of the puppet characters. “Crow is just the sarcastic smart-ass and Tom is also an agent of chaos but emotional and huffy and it’s so fun that, even though the hosts have changed, you know the puppeteers have changed as well with the robots. But I love that everybody has brought their own spin to those characters. Those characters do stay the same. The host characters may vary because there’s no BS-ing. It’s you, you’re the straight man. But Crow and Tom, I love that everybody comes to it and has to embody that creature of chaos that is those guys. And GPC, too. 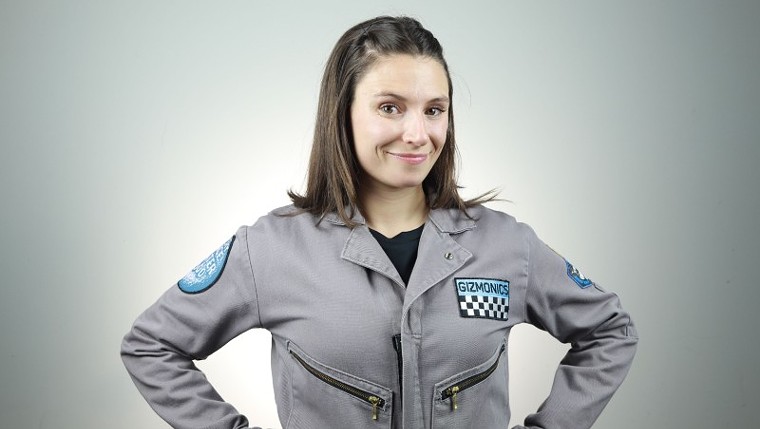 MSTies hope Marsh is trapped on the Satellite of Love for some time to come
Photo by Tiffany Byrd Harrison, courtesy of Society for the Performing Arts

“I think people love the way things stay the same but then the way things change. There’s just something that works to having those guys causing mischief and then a human in the middle trying to keep it all under control.”

There’s chaos when the MSTies get to meet Crow and Tom Servo live and in-person, too, Marsh noted.

“Fun fact, we do the meet and greets at every show, which is fantastic, where we really get to interact with MSTies. We’re answering questions, we take pictures, we get to meet them. In COVID times, there’s a little more distance. We basically do the same thing but we’re on the stage, they’re in the audience,” she explained. “But the last time around people came right up with us behind a desk and took pictures and my favorite is the amount of people that wanna kiss Crow. It’s fascinating! That always surprised me, like really? Everybody’s giving love to Crow.

“I think the Crow division is slightly bigger but the love for Tom, though maybe a smaller crew, is still as passionate,” she said.

Marsh knows the whole “family” thing is cliché, but she said the live MST3K shows are really like a family reunion. She knows because she’s been part of the family for a long time.

“I would say this is a show that has a lot of nostalgia and a lot of dedicated fans over the years and that’s something that I’ve thought a lot about because I’ve been a fan of the show since I was a kid,” Marsh said. “That, I think, has been the thing that changed me the most, now getting to be part of the show and really meeting so many people who are such hardcore fans of the show and just how kind those people are. If there’s any trouble that I have it’s that so many people reach out and I’m like, ‘Oh my gosh, how am I going to have enough time to react to all of these kind messages and kind requests?’

“It’s a family. I know that gets thrown around a lot but that’s a phrase that has been super common in the MSTie outreach that I’ve gotten. They’re like, ‘We’re very happy that you’re part of the MST3K family.’ That, I think, has really changed me and changed how I thought about the show, just realizing how warm the community is.”