Conan's Creator Gets His Own Epic Origin (and Death) Tale Told With the recent death of Larry McMurtry at the age of 84, Texas lost one of its biggest literary stars and influences. Someone whose works managed to be both popular and of higher ambition at the same time. And of course, found even wider fame in television and movie adaptations.

But another Lone Star State scribe who passed in 1936 at just the age of 30 and whose published page count output was for more modest probably has an even wider worldwide impact in terms of readership via his greatest fictional creation: Conan the Barbarian. And even though is best friends called him an “enigma,” biographer Todd M. Vick here tries to unwrap the life of Robert E. Howard, calling him the “greatest unknown author in the state of Texas, maybe even the world.” 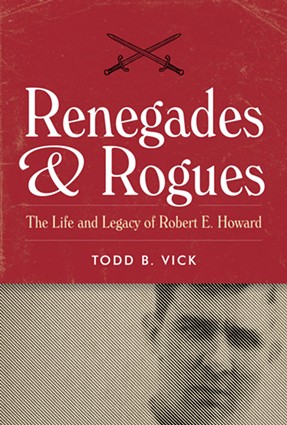 Vick goes into extra detail about Howard’s family history, early life, and school years, as well as background on the early days of pulp fiction publishing whose cheap magazines with titles like Action Stories, Spicy-Adventures Stories and Cowboy Stories thrilled usually young, male readers. And of course his most frequent platform that saw the 1932 debut and development of Conan: Weird Tales. In fact, Renegades & Rogues doesn’t even introduce the Crom-worshipping Son of Cimmeria until over hallway through.

The young Howard was a voracious and inquisitive reader in a climate and culture where Texas boys who liked book learnin’ were often looked at with curiosity. Especially given Howard’s bulky, round-faced physique, a look more of an oil field worker or auto mechanic than someone who spent most of his time hunched over a typewriter or in libraries.

His love of the written word came from his outgoing mother Hester, with whom he developed an extremely close symbiotic relationship. His father, Dr. Isaac Howard, by comparison was aloof and taciturn, moving the family to different cities before settling in small town Cross Plains, Texas, about 45 miles southeast of Abilene.

Through his life, Howard cultivated many close friendships both in-person and via letters with other like-minded writers and fantastical fiction fans, including sometimes peppery but affectionate exchanges with groundbreaking author H.P. Lovecraft (who called him “Two-Gun Bob”). But he’s only known to have one serious girlfriend, local schoolteacher Novalyne Price. She later wrote about their relationship in the memoir One Who Walked Alone, later the basis for the 1996 movie The Whole Wide World. 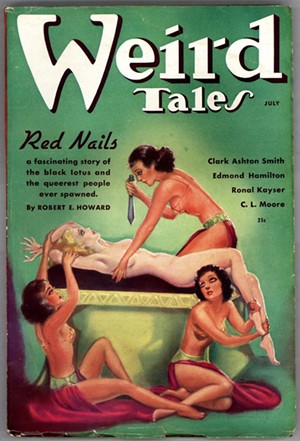 "Weird Tales" was Howard's frequent venue for Conan stories.
Magazine cover, 1936
Price got used to people giving her weird looks as she dated the town oddball known to loudly perform his stories as he banged on the typewriter deep into the night, or take vigorous walks alternately shadow boxing and talking to himself.

But the extremely symbiotic relationship that Howard had with his mother, and the statement from Howard himself that he wanted to be free like a cowboy and not tied down by a wife, meant they would never be more than friends.

As Howard got toward the end of his life and writing career, things changed—and not for the better. He grew tired of writing Conan adventures and moved more into Westerns. The pulp market was winding down and magazines were slower to pay freelancers. Friends urged him to focus on Texas history.

Vick offers some thoughts on Howard’s mental state, but even a horde of murderous Picts would be easier to face than the impending death of Hester from a variety of ailments. First taking care of her all himself (Dr. Howard, a rural practitioner, was often away), then with the help of maids and nurses, while dropping hints of suicidal thoughts and actions.

In June 1936 when Hester slipped into a coma, Howard asked a caretaker if she thought his mother might every recognize him again. Given an answer that confirmed his depressed thoughts, Robert E. Howard walked out to his car, rolled up his windows, pulled a gun out of the glove compartment, and shot himself in the head. He hung on for eight hours, but never regained consciousness. The next day, Hester passed. 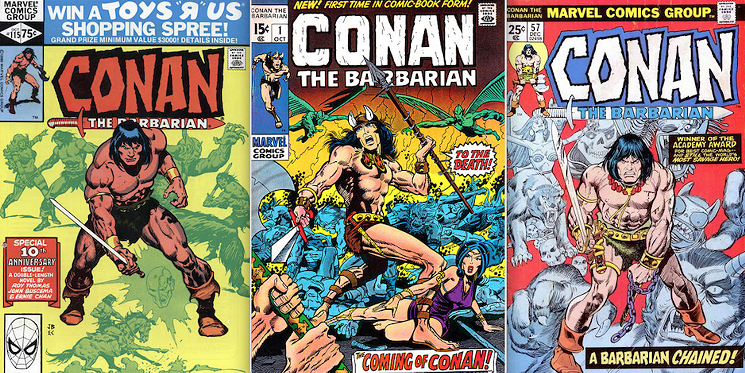 Marvel Comics covers, 1970's & '80s.
But it’s not for no reason he’s called the “father” of the sword and sorcery genre. And Conan stands high and tall above the pack, even though the character’s biggest popular culture presences have been thanks to Marvel Comics, artist Frank Frazetta’s covers on a series of paperbacks in the ‘60s and ‘70s and the two movies starring Arnold Schwarzenegger, rather than Howard’s original prose tales.

Conan thrives today on board, video, and role-playing games, TV shows, cartoons, more comic book series, many more novels by a gallery of writers, and one ill-advised 2011 Hollywood reboot with Jason Momoa (Game of Thrones, Aquaman). Separate chapters at the end of the book chart Conan’s publishing and pop culture history, while another traces Howard’s story arcs.

The house that the Howard and his family lived in Cross Plains is now the Robert E. Howard House and Museum, and on the National Registry of Historic Places. Every year the town hosts a Howard Days festival to honor its most famous son and his most famous creation. And in Renegades & Rogues, this “mysterious” Texas scribe gets his most complete story arc told.

Renegades and Rogues: The Life and Legacy of Robert E. Howard
By Todd B. Vick
312 pp.
$29.95
University of Texas Press
KEEP THE HOUSTON PRESS FREE... Since we started the Houston Press, it has been defined as the free, independent voice of Houston, and we'd like to keep it that way. With local media under siege, it's more important than ever for us to rally support behind funding our local journalism. You can help by participating in our "I Support" program, allowing us to keep offering readers access to our incisive coverage of local news, food and culture with no paywalls.
Make a one-time donation today for as little as $1.