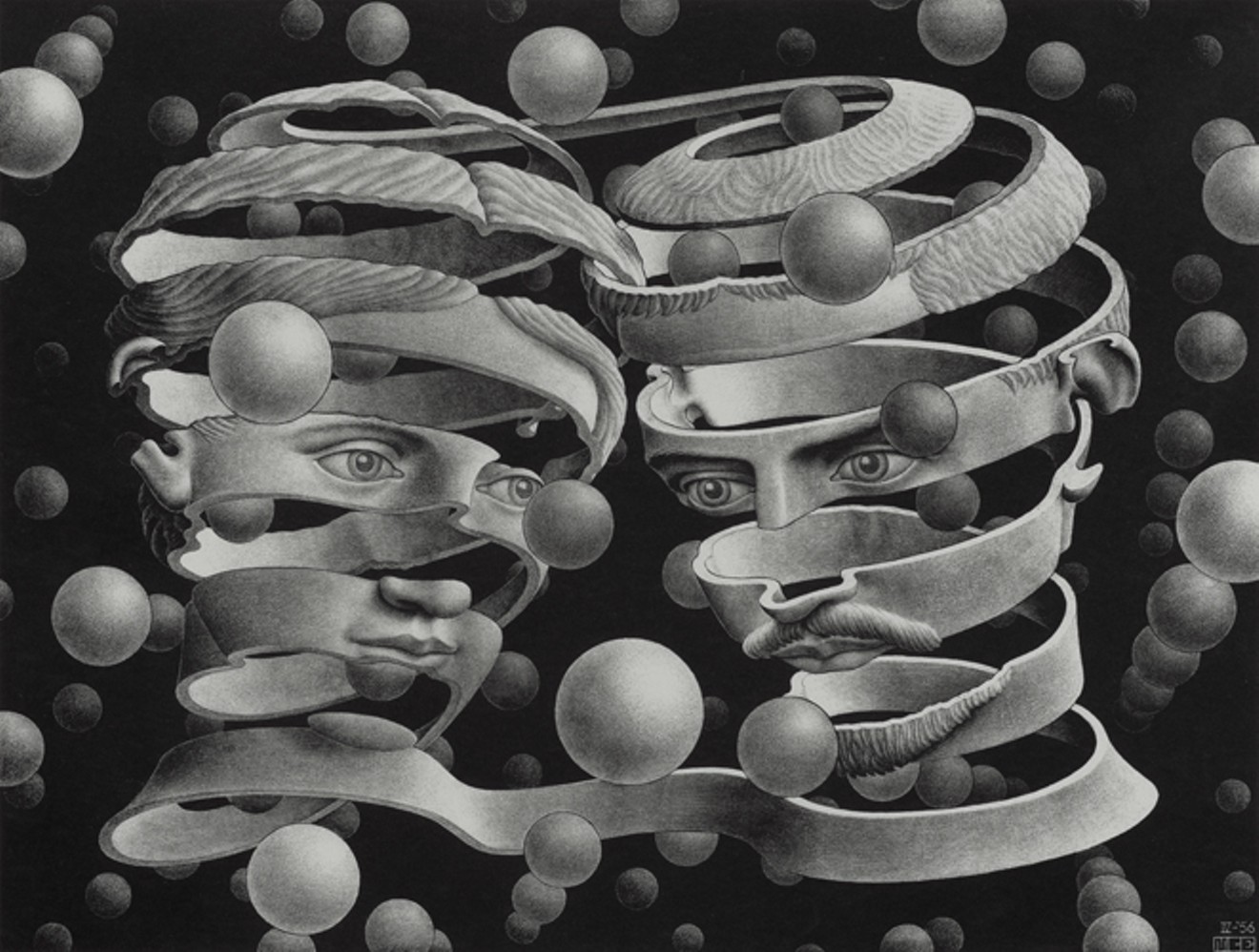 "Bond of Union" lithograph by M.C. Escher, 1956. Work copyrighted the M.C. Escher Company
For most of his adult life, Mick Jagger has probably only rarely heard the word “no” in response to any of his requests. But he heard it at least twice from Maurits Cornelis Escher, the graphic artist better known as M.C. Escher.

It seems that the Rolling Stones front man, really, really, really wanted Escher to design an album cover for the group. But the Dutchman was steadfast in his answer: “not interested.” 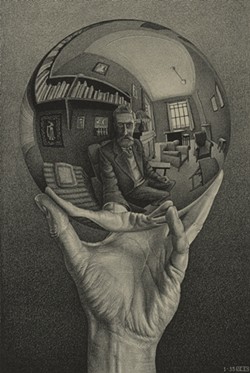 "Hand with Reflecting Sphere" lithograph by M.C. Escher, 1935.
Work copyrighted the M.C. Escher Company
“Mick very respectfully asked him twice to do a cover, and Escher said that he was much too busy with his own work and refused,” says Dena Woodall, Curator of Prints and Drawings at the Museum of Fine Arts, Houston. “Of course, Mick also tried to call him ‘Maurits’ and was told ‘That’s Mr. Escher to you.’”

A sizable amount of the artist’s work from across Escher’s entire career will be on display in the massive exhibit The Art of M.C. Escher from the Michael S. Sachs Collection. It runs at the MFAH from March 13 through September 5.

They are all from the peerless Escher collection of Michael S. Sachs. In 1980, Sachs acquired 90 percent of the works in the Escher estate, and it includes hundreds of more objects and works than even the MFAH could display. Exhibit attendees will also be able to see some of Escher’s own working tools.

“[Sachs] has got all of the preliminary drawings leading up to the final prints, a lot of the wood blocks, and Escher’s actual tools. So in this exhibit, you’re seeing the fully comprehensive Escher, especially the early material when he’s coming up with his ideas,” Woodall continues.

Maurits Cornelis Escher (1898-1972) was born in Leeuwarden, the Netherlands. For much of his student days and early career, his artistic work was much more of the traditional variety, showcasing landscapes and architecture. But extensive European travels—and especially in Italy and Spain—helped him see things in a different way as he visualized perspective, patterns, repeating motifs and especially tessellations.

As his work began to feature more geometric, mathematic, scientific and natural world subjects, they began taking on a much more “mind bending” look and made great use of perspectives and fanciful realism. Some saw purposeful whimsy and others an artistic challenge with a unique viewpoint. Others thought it was just bizarre. Of his work, Escher himself once said “You have to retain a sense of wonder, that’s what it’s all about.” 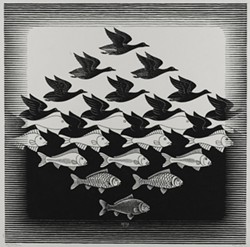 "Sky and Water I" woodcut by M.C. Escher, 1938.
Work copyrighted the M.C. Escher Company
“Now, he wasn’t great at math and did not score high marks in secondary school, but mathematicians themselves have said that his art brings their experiments to life in visual terms,” Woodall says. “And he’s doing things that nobody in his time or before or after were doing. To him, math is like poetry, and his art fully shows that.”

In any case, he achieved that rare plateau for an artist where his very name became shorthand for a unique style of art, with “Escher-esque” and “Escher-like” descriptions getting thrown around and what Woodall calls “knock off” art. And according to the MFAH press release, M.C. Escher has been called a “one-man art movement.”

“We often say that he went completely off into his mind and imagination and away from reality, but he definitely was also looking at [real] things,” Woodall adds. She says that he once got inspiration for one of his works after finding a mummified frog behind a piece of his furniture, which he then drew and turned into a print.

“He saw lichens in the forest near where he lived and was inspired. He incorporated a lot of nature into his imaginative, reflective landscapes as well as the ones [from his] imagination.”

If you went to college in the ‘80s or ‘90s, then it was fairly required that you have three objects upon arrival at the dorm: A CD of the Bob Marley anthology Legend, a copy of the John Kennedy Toole novel A Confederacy of Dunces and an M.C. Escher print to hang on your wall.

Woodall says that the first major retrospective book of Escher’s works in English came out in 1960 and featured some 76 images. By later in the decade, he became a favorite artist of pharmaceutical-and-herbal-ingesting hippies and pop culture connoisseurs. That connection will be showcased in the exhibit’s collection of Escher “inspired” bootleg black light posters and record covers.

In one of the text panels on display, Woodall says Escher bemoaned the hippies in San Francisco sort of glomming onto his style and saw some “grisly results” of his influence on their own work.

And the hippies’ interpretations were sometimes off. Greenery seen in some of his work may resemble marijuana plants, but they aren’t. Nor did he promote the theory of reincarnation in the famous Reptiles. 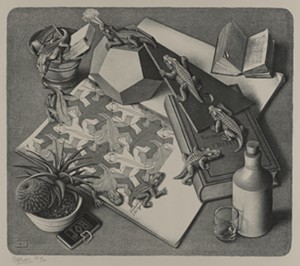 "Reptiles" lithograph by M.C. Escher, 1943.
Work copyrighted the M.C. Escher Company
Woodall adds that younger people should also note that Escher wasn’t using a computer with programs to figure out this work and design—it’s all done completely with old school paper and drawing utensils. The kind you have to actually hold in your hand.

“Escher has been in our consciousness and popular culture and even currently in things like [TV series] Squid Game that are related to relativity. Younger generations don’t even know that it all started with Escher,” she says.

Today, Escher’s influence is not just in visual arts. Woodall says you can also see it “transmuted in so many different ways” in video games and graphics. And there’s even an Escher String Quartet playing music inspired by his visuals.

“He had a diligent, methodical working process. And he was even trying to capture infinity toward the end of his career. Trying to do that on a two-dimensional level and figure that out,” she adds.

Woodall comes to her appreciation of Escher naturally. She remembers being captivated by a book of his works that she had in junior high school. “And I loved reptiles, so I went crazy over it!” she laughs.

Asked if, say, MFAH Director Gary Tinterow told her “Great job on the exhibit, Dena! You can take one work home!” it’s no surprise which one would end up on her dining room wall.

“I think I would take Reptiles! She laughs. “That’s the one that really captured my imagination in the 8th grade!”

For more on M.C. Escher, visit MCEscher.com
KEEP THE HOUSTON PRESS FREE... Since we started the Houston Press, it has been defined as the free, independent voice of Houston, and we'd like to keep it that way. With local media under siege, it's more important than ever for us to rally support behind funding our local journalism. You can help by participating in our "I Support" program, allowing us to keep offering readers access to our incisive coverage of local news, food and culture with no paywalls.
Make a one-time donation today for as little as $1.