King of Kings and Lord of Lords! Photo by brownpau/flickr
Hallelujah, the holidays are in full swing, and it wouldn't be complete without a visit to the Houston Symphony for George Frideric Handel's Messiah, running December 21 - 23 at Jones Hall. The long-famous lyrics may include male-centric phrases like "King of Kings and Lord of Lords," but this year, it's the women who will make the magic of the holiday season come alive with this wintertime favorite.

Jane Glover will assume the conductor's stand for the concert, which will also feature singers from the Houston Symphony Chorus. The chorus is trained under the fine-tuned ears of longtime symphony constituent Betsy Cook Weber. These two leading ladies have shaped and sculpted the music into a musical feast for the entire family to enjoy heading into the final days of the festive season.

Regarding being a leading female conductor, a rare breed in the symphonic world, Glover sees that the ladies are starting to catch up with the men.

“After 40 years, I’m still here. When I first started, there weren’t many of us, and I was an oddity, but I’m thrilled to see so many young women getting positions in large orchestras," said Glover. "There’s no reason why female musicianship is less relevant that anyone else’s. It’s sort of like politicians, doctors and lawyers. We’re slowly but surely catching up.” She is the perfect pick for this concert. She recently authored a critically acclaimed book, Handel in London, which tells the story of Handel and how his pieces changed his life as well as holiday traditions, and she's quite the expert. She researched and wrote for ten years to pull the book together to tell the story of this masterwork. 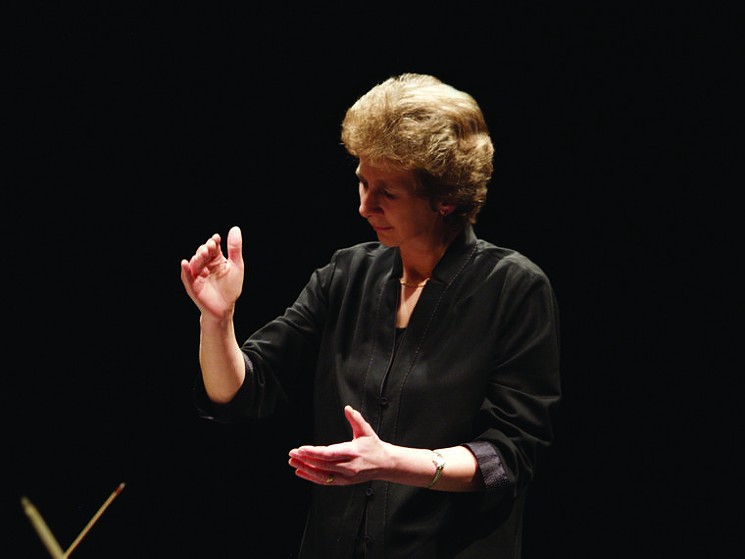 Jane Glover masterfully conducts the symphony this holiday season for the perennial favorite, Handel's Messiah.
Photo by Jim Steere
She described that despite the longstanding tradition of performing this piece during December, it's a story originally intended for a different time of year. Handel first wrote it as an Easter song.

Here's the short version of how it came to be: an ardent admirer of Handel's music sent him a text compiled of favorite Bible verses, hoping it would inspire a piece of music that would best his previous compositions. He composed the initial draft in just 24 days — a miracle by any standard. He was invited to present it in Dublin, and Messiah became the grand finale of his concert series on April 13, 1742. It was an instant classic. Handel donated the proceeds from the premiere to local charities, and he then devoted himself to composing other biblically-inspired works.

Messiah is divided into three parts: The prophesies of the Messiah as Christ, the Passion and finally the Redemption.

"In Handel's lifetime, he performed it at Easter because Part 2 is the Passion story and Part 3 is the Redemption," said Glover. Yet, "We’ve come to associate it with Christmas. [In Part 1], there are sleeping shepherds surprised by angels. There’s a lot of drama surrounded by this music."

She said, "People were terrified that the word of God was being performed in the theater, but then people started to recognize the masterpiece it was. He would later adapt it for his audience, which is why we have variations of it."

She recently finished her 100th performance of the piece, and says it never gets old.

Glover said, "The quality is matchless. Every single number is a showstopper. No one can tire of it."

Handel's Messiah is scheduled for 8 p.m. on December 21 and 22 and 2:30 p.m. December 23 at Jones Hall, 615 Louisiana. For information, call 713-224-7575 or visit houstonsymphony.org. $29 to $130.
KEEP THE HOUSTON PRESS FREE... Since we started the Houston Press, it has been defined as the free, independent voice of Houston, and we'd like to keep it that way. With local media under siege, it's more important than ever for us to rally support behind funding our local journalism. You can help by participating in our "I Support" program, allowing us to keep offering readers access to our incisive coverage of local news, food and culture with no paywalls.
Make a one-time donation today for as little as $1.