Artist Floyd Newsum depicts dogs as the Egyptian protector of women in this large scale acrylic and oil, D’ Oh Gee at Play Time. Photo by Mason Rankin for the artist and Nicole Longnecker Gallery
It's a great month for Houston art with two important gallery exhibitions of Texas artists who also are in the permanent collections of world-class museums. Works by the late modernist sculptor Jim Love are on view at Moody Gallery, while local legend Floyd Newsum is exhibiting some previously unseen works just down the street on Colquitt.

Rule No. 1, don't tell Floyd Newsum that his art has a Basquiat feel. That kind of talk will net you some serious side-eye from the Houston-based artist and educator, who will be in attendance during the opening reception for "Past, Present, and Future" at Nicole Longnecker Gallery.

Gallery owner Nicole Longnecker tells us that many will look at Newsum's gestural, naive style and think about Basquiat, but the artist will bristle at the suggestion. "Basquiat was hyper-political, he was strung out on heroin, he was a person who lived on the streets. [He was all] tough upbringing, fight the power, screw the police, struggle for everything," says Longnecker. "His mark making was aggressive, punchy.

"Whereas Floyd, all of his work is about redemption, about family and about learning. He’s a man of faith. At the same time it's a story that transcends faith, humanity and upbringing," adds Longnecker.

Storytelling is inherent in all of Newsum's works and there is an overall feeling of joy, even when the pieces touch on political, cultural or world events. Much of his art was inspired by a trip to West Africa, and we'll see iconography based on storytelling and myths: a blue snake in the field means good crops; the dog is the Egyptian protector of women. 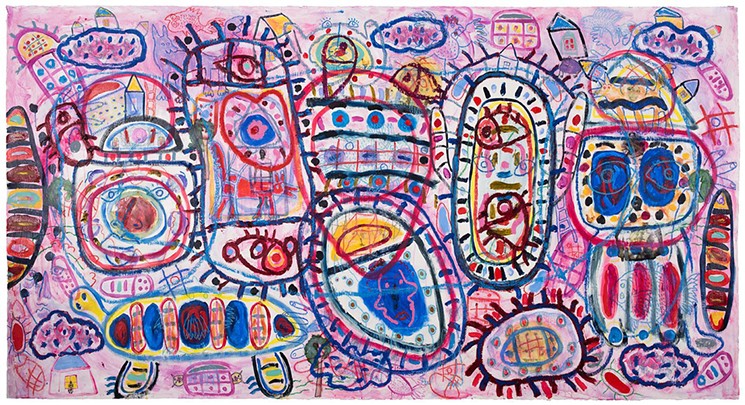 Sirigu, Janie's Journey is a relatively new work (2018) by Floyd Newsum that measures 55 by 112 inches.
Photo by Mason Rankin for the artist and Nicole Longnecker Gallery
Newsum established his Sirigu color palette during his visit to Ghana, where he observed tribal women painting and re-pigmenting their houses each year with the bright yellows and oranges of the local clay.

"In Sirigu, Janie's Journey (shown above), Janie by the way is his great grandmother. She was a slave and when she was freed she worked as a cook and saved her money and with the money she saved she was able to buy a piece of property and that property still stays in the family and they still reap the benefits," adds Longnecker.

The exhibit's title, "Past, Present, and Future," is a fitting one, as we'll view early works by the artist, as well as the two massive pieces shown here that were created in 2017 and 2018. Just last year Chris Shepherd's Georgia James restaurant opened with its own collection of Newsum's art in the main and private dining rooms, while three years ago we saw Newsum's work added to the permanent collection of Washington, D.C.'s new Smithsonian Institution's National Museum of African American History and Culture. As for the future, we hope he never quits his day job as art professor at University of Houston Downtown, where he's helping shape the artists of tomorrow.

Oh, and that opening reception where the "B" word isn't allowed? That's this Saturday, February 23, from 5-8 p.m.

"Past, Present, and Future" is scheduled for February 23 through March 30 at 11 a.m. to 5 p.m. Tuesdays through Saturdays at Nicole Longnecker Gallery, 2625 Colquitt. For information, call 346-800-2780 or visit longneckergallery.com. 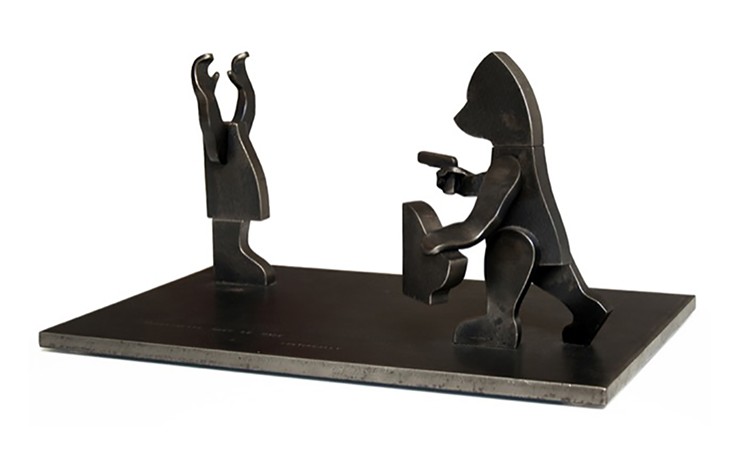 Adjustments Must Be Made Continually, by Jim Love (1984), from the series "Tomorrow is No Solution."
Photo by Moody Gallery, Houston, Texas
Stunning, but in an entirely different way, are the welded steel sculptures by modernist Jim Love over at Moody Gallery. While Betty Moody had been showing Love's work since 1992, it was last year's death of big-time Texana collector William J. Hill that opened the door for "Jim Love: Sculpture," the first solo exhibition of the artist's work at the gallery since he died in 2005.

"In fact, many of these pieces had passed through my hands several times, through the secondary market. People would bring me pieces and every time I would get a piece by Jim love, [Hill] said, 'Give me a call.' It goes back to the ‘60s," says Moody. "We have pieces so early it was before he signed or dated them.

"I knew Bill [Hill] when he first started collecting," says Moody. " He just had an impeccable eye for anything Texas. He did his research."

Ranging in size from five to 19 inches in height, Moody is displaying the whimsical sculptures on shelves and pedestals, grouping together things of like mind and scale in the garden gallery. She does have favorites, including Raccoon on Roller Skates and Red Neck Trooper, but Moody also is a tremendous fan of the titles Love gave to his pieces.

"His titles are fabulous. Jim, as you know, had an extremely wonderful, wry sense of humor," adds Moody. Examples include Mother-In-Lieu; Alas, Poor Yorick; and Only One Can Wear the Hat. 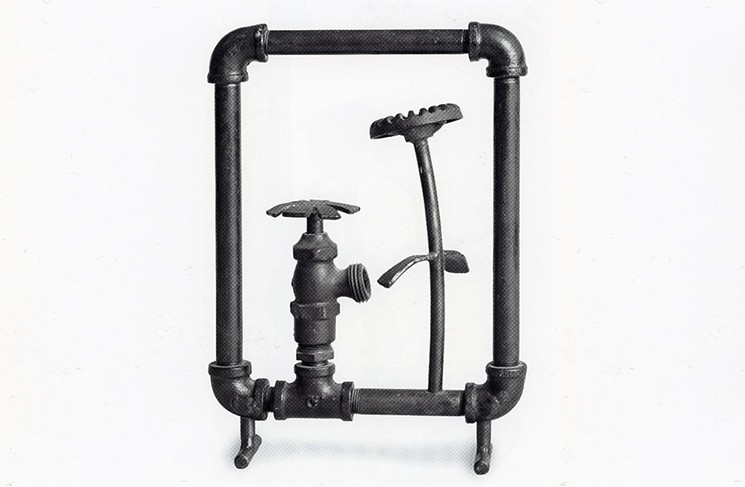 The Looking Glass, by Jim Love (1961).
Photo by Moody Gallery, Houston, Texas
The works in "Jim Love: Sculpture" cover close to 30 years of work, and Moody has supplemented the objects from The Estate of William J. Hill by adding a few more pieces for depth.

Love's work is in the collections of The Menil Collection; the Museum of Fine Arts, Houston; and the Whitney Museum of American Art, New York.

"Jim Love: Sculpture" is scheduled for February 14 through March 16 at 10:30 a.m. to 5 p.m. Tuesdays through Fridays and 11 a.m. to 5 p.m. Saturdays at Moody Gallery, 2815 Colquitt. For information, call 713-526-9911 or visit moodygallery.com.
KEEP THE HOUSTON PRESS FREE... Since we started the Houston Press, it has been defined as the free, independent voice of Houston, and we'd like to keep it that way. With local media under siege, it's more important than ever for us to rally support behind funding our local journalism. You can help by participating in our "I Support" program, allowing us to keep offering readers access to our incisive coverage of local news, food and culture with no paywalls.
Make a one-time donation today for as little as $1.