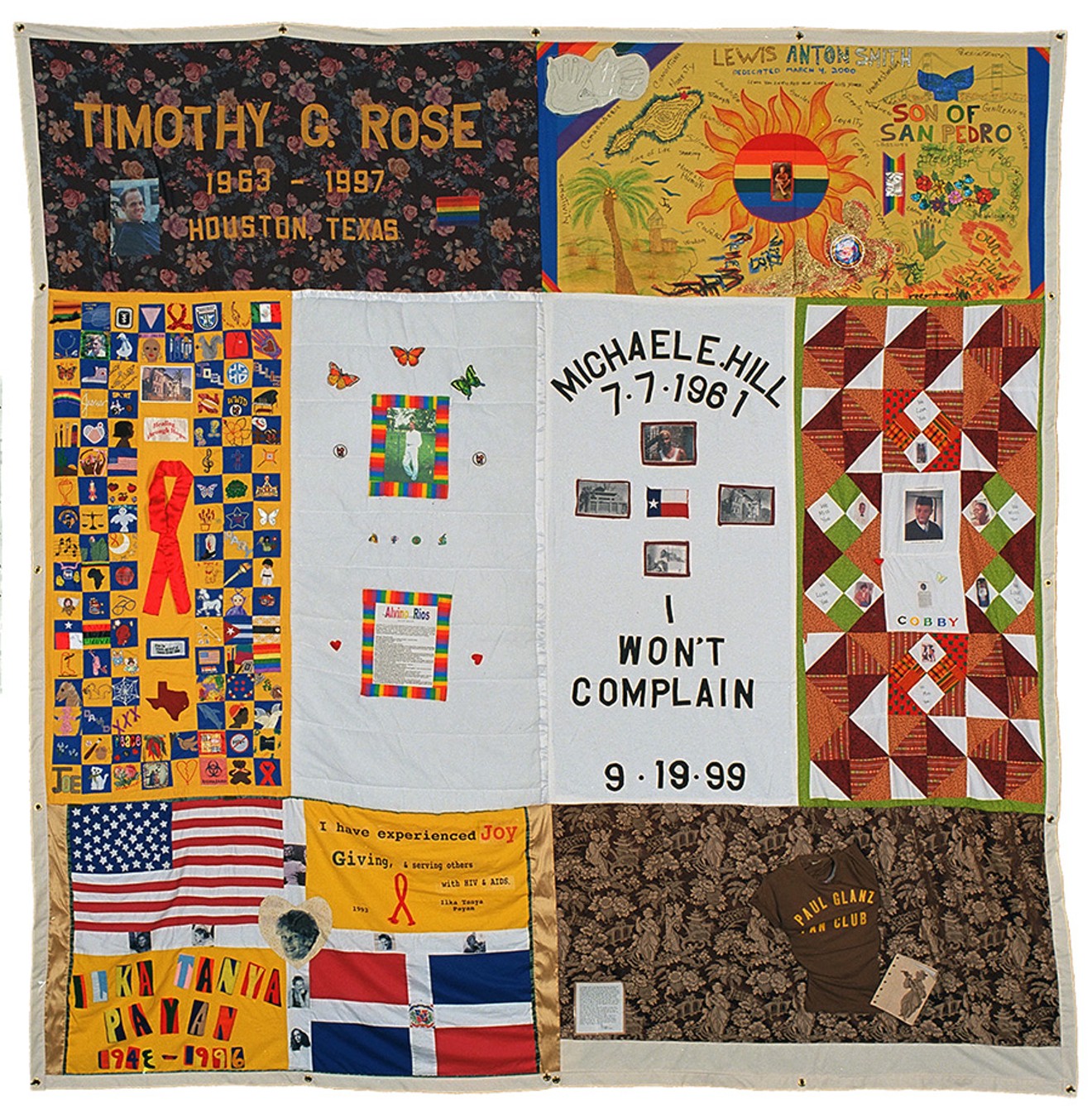 The Quilt is an ever-growing memorial to the victims of the virus. Photo by AIDS National Memorial, courtesy of AIDS Foundation Houston and with permission of the artist.
Before COVID-19, there was HIV/AIDS. The virus' impact decimated entire groups of people, and many of them are remembered through a memorial called the NAMES Project AIDS Memorial Quilt. Each year, sections of the AIDS Memorial Quilt travel to communities across the country for in-person displays. Due to the pandemic, 2020 marked the first year of the virtual exhibition of the Quilt across all 50 states. Locally, AIDS Foundation Houston, Inc. has launched a virtual display of the Quilt.

The digital display hosted by AIDS Foundation Houston will feature eight panels that honor friends, colleagues and loved ones from the Houston area and is available for view on the AIDS Foundation Houston website. The entirety of the Quilt, comprised of 48,000 hand-sewn panels that memorialize those lost to AIDS, is available to view on the AIDS Memorial Quilt website through March 31. The exhibition will include digital images from thousands of panels, each telling the story of a loved one lost to AIDS.

CEO of AIDS Foundation Houston John Huckaby said in a statement, “2020 marks the 40th anniversary of the first reported cases of AIDS in the United States. The AIDS Memorial Quilt allows us to reflect on the past four decades, remembering those who lost their lives and celebrating the numerous organizations and individuals who have led the fight against HIV. We are proud to display panels of the Quilt that tell the story of our community, and we remain dedicated to ending the HIV/AIDS epidemic in Houston.”

AIDS Foundation Houston is one of only seven Texas organizations to host the virtual showcase this year. For Huckaby, the panels bring back memories throughout the years of AIDS' spread and the Quilt's importance.

"I saw The Quilt for the first time in the '90s at the George R. Brown Convention Center. To walk the floor of the convention center, to see the overwhelming number of panels, it was so striking. I saw panels of people I knew and worked with. To read the panels of people I didn’t know, that was profound," he said.

The 3 X 6 foot panels are reminders of souls lost to HIV.
Photo by AIDS National Memorial, courtesy of AIDS Foundation Houston and with permission of the artist.
The impact of HIV/AIDS became so much more tangible when the Quilt was first conceived by Cleve Jones in 1985 as a response to the government's non-action during the pandemic. Jones viewed quilting as therapeutic and as something that brought warm memories, which was the impetus for the Quilt. Each panel measures 3 feet by 6 feet, the traditional size of a casket. That measurement was intentional as it was meant to be a symbol of a life lost to HIV/AIDS.

On October 11, 1987, the Quilt was displayed for the first time on the National Mall in Washington, D.C., during the National March on Washington for Lesbian and Gay Rights. Images and articles about the Quilt filled newspapers and broadcasts afterward. The Quilt covered a space larger than a football field and included 1,920 panels, and it has only continued to grow. It is now so large that the entire Quilt cannot be physically displayed in its entirety - which makes this virtual display the perfect workaround so people can reflect on the stories of each person's life included in the Quilt.

Jones was recently awarded with the 2020 Shelby Hodge Vision Award for his outstanding effort to bring awareness to the AIDS pandemic during AIDS Foundation Houston's annual World AIDS Day event. During that event, he said, "I have so many complicated emotions about the Quilt. I was a young man when I began that project, and it was going to be a one time thing in 1987. It never occurred to me that this would go on. But after we laid it out on the Mall, we received letters from all over the world, and they asked us to bring the Quilt to their community. From there, I understood that it would continue."

In November 2019, the National AIDS Memorial became the permanent caretaker and steward of the Quilt, returning it to San Francisco, where its story began during the height of the AIDS epidemic.  At that time, the Quilt’s archival collection of 200,000 objects, documents, cards and letters that chronicle the lives remembered in it were transferred to the prestigious American Folklife Center at the Library of Congress, making this collection available through the world’s largest public library.

The world’s largest piece of community art, the Quilt also raises funds for community-based AIDS service organizations like AIDS Foundation Houston. Bayou City reaps the benefits of the organization's 365 day services for both the people and families affected by HIV/AIDS as well as people who are HIV-negative.

"I think there’s a growing awareness of HIV's prevalence in the south. The southern part of the United States is highly represented in the prevalence of HIV compared to other parts of the country," Huckaby said. "That's a challenge we continue to face today. As an organization, we ask ourselves how we can reach deeper into communities to provide the life-saving information and treatment and the U=U message."

For the unfamiliar, the National Institute of Allergy and Infectious Diseases explains the meaning of U=U. Its website reads, "In recent years, an overwhelming body of clinical evidence has firmly established the HIV Undetectable=Untransmittable, or U=U, concept as scientifically sound. U=U means that people with HIV who achieve and maintain an undetectable viral load—the amount of HIV in the blood—by taking antiretroviral therapy daily as prescribed cannot sexually transmit the virus to others. Thus, treatment for HIV is a powerful arrow in the quiver of HIV prevention tools."

Another tool in AIDS Foundation Houston's arsenal is Pre-exposure prophylaxis (or PrEP). PrEP is a way for people who do not have HIV but who are at very high risk of contracting HIV to prevent infection by taking a pill every day. The pill contains two medicines (tenofovir and emtricitabine) that are used in combination with other medicines. Along with advances in medicine, the fight against HIV/AIDS has been invigorated and taken new shape.

"We really take a holistic view of ending the HIV epidemic. Supporting AIDS Foundation Houston means supporting community-based testing. We go out in the community at large events and provide testing. We want people to know their status. It also allows us to provide services like PrEP medications. It allows us to provide linkages into people living with HIV. We really are passionate about addressing the social determinants like housing security and food security. Supporting our organization is supporting our housing and Stone Soup pantry and case management. It also enables us to do community outreach and engagement so that we can provide information and training so that people know how to get help when they need it."

The quilt memorializes loved ones with quotes, images, photos and other pieces of memborabilia significant to the person.
Photo by AIDS National Memorial, courtesy of AIDS Foundation Houston and with permission of the artist.
Part of getting new Houston cases down to zero also means addressing the stigma of testing and HIV status.

"How do you make HIV stigma-free? It begins with conversations and our healthcare providers...and not just HIV healthcare but all healthcare providers being informed and having conversations with patients to normalize that HIV screening is just as important as any other wellness care. It also encourages our communities to approach their physicians seeking an HIV screen as part of their annual wellness care," Huckaby said. "There was tremendous stigma around HIV when it first started spreading, and one of the byproducts is that only certain people are at risk, and we need to work to overcome that."

Our country is currently grappling with a virus that has resulted in 465,000 deaths and 27.1 million cases in the United States. Those are just the figures for the moment...and they rise sharply each day. It behooves us to take a look at the similar AIDS epidemic and its very real, still present devastation. The Quilt is a way to perform that duty in a way that brings beauty and healing to this rather grim subject.

The Quilt is on view on the AIDS Foundation Houston's website. The entirety of the Quilt is available to view on the AIDS Memorial Quilt website through March 31, 2021. Free.
KEEP THE HOUSTON PRESS FREE... Since we started the Houston Press, it has been defined as the free, independent voice of Houston, and we'd like to keep it that way. With local media under siege, it's more important than ever for us to rally support behind funding our local journalism. You can help by participating in our "I Support" program, allowing us to keep offering readers access to our incisive coverage of local news, food and culture with no paywalls.
Make a one-time donation today for as little as $1.