Cali Sandwich, which has won several Best of Houston awards over the years, is the kind of place that makes owning a restaurant look easy. But its path to Midtown fame was riddled with disaster. Nga Chong, who runs the place with her sister, her daughter and her mom, fled political repression as a teenager in Vietnam. She and her husband operated a gas station in Houston during the '80s, until they separated. She went into business on her own and opened the famous Les Givral's sandwich shop on Travis in 1993. She lost $70,000 in her first three years. Then business turned around and she began selling hundreds of sandwiches a day. Profits mounted, but in 1999 the restaurant went up in flames. She plowed her profits into stocks, which tanked. Then, in 2003, she used her last bit of money to open Cali Sandwich. It's been phenomenally successful, based in part on Chong's friendly banter and smile -- proof that being a good person really does pay off. "If I'm not there," Chong points out, "the customers ask where I am." 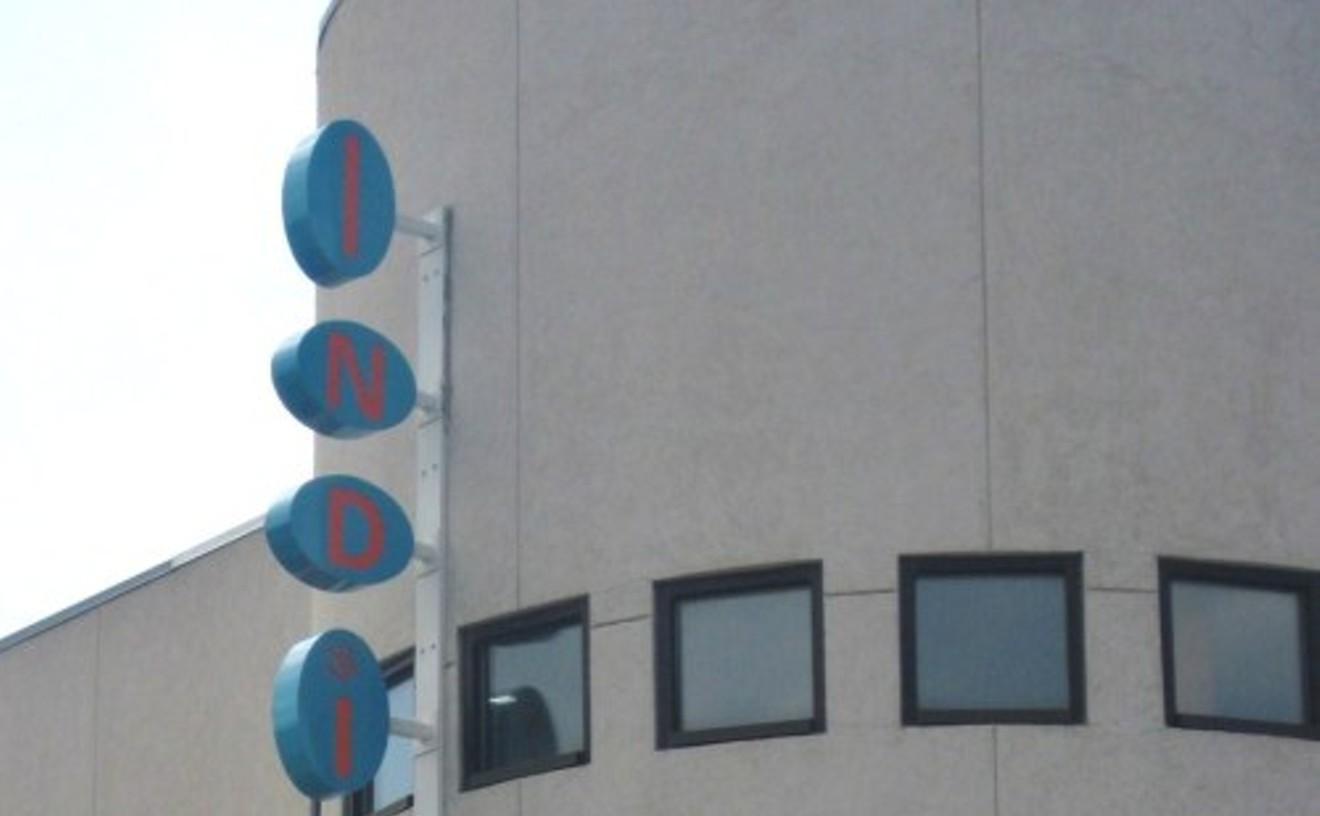 Succumbing to the easy pitfalls of "fusion," modern Indian cuisine often sheds thousands of years of culinary tradition simply to appeal to timid Western palates. Indika adroitly avoids these hazards. Since it moved from west Houston to Montrose, it has been turning out some of the most unforgettably delicious food -- Indian or otherwise -- in the city. No true sampling of the restaurant's treasures is complete without the crab samosas. Loaded with lump crabmeat, spiced to perfection with fresh herbs and deep-fried with a delicate hand, their succulent crunch will make you eschew regular old samosas and crab cakes. The grilled lamb chops are perfect: mildly charred on the outside, tender in the middle and bathed in an authentically piquant Kashmiri curry. A bed of fresh greens offsets the heaviness. The seafood biryani jazzes up an Indian staple to great tropical effect with coconut milk, dried fruits and a spicy cilantro pesto. The breads, chutneys and dals are all excellent -- the brilliance of Indika's creativity lies in its faithfulness to Indian-cuisine fundamentals. 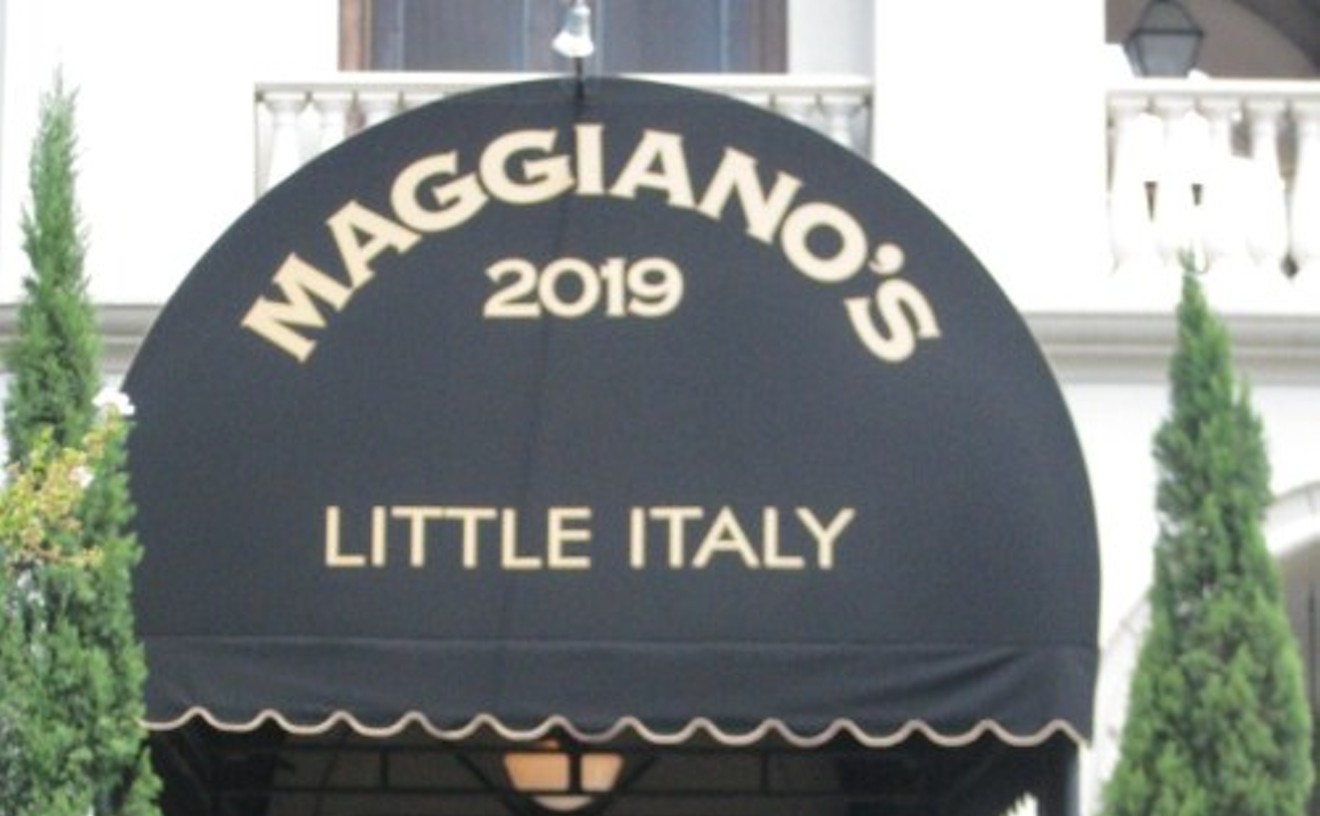 If two is better than one, then three is definitely better than two. All of the dishes at Maggiano's are served family-style, and when you order their wonderful veal Marsala, you get three large slices of meat -- plus enough mushrooms to cover the entire platter -- for scarcely more than what other restaurants charge for a single small slice of veal. The Marsala sauce that covers the veal is not overly sweet, and the meat is incredibly tender. Served over your favorite pasta, it's enough to make you wanna cry, "Mama mia!" 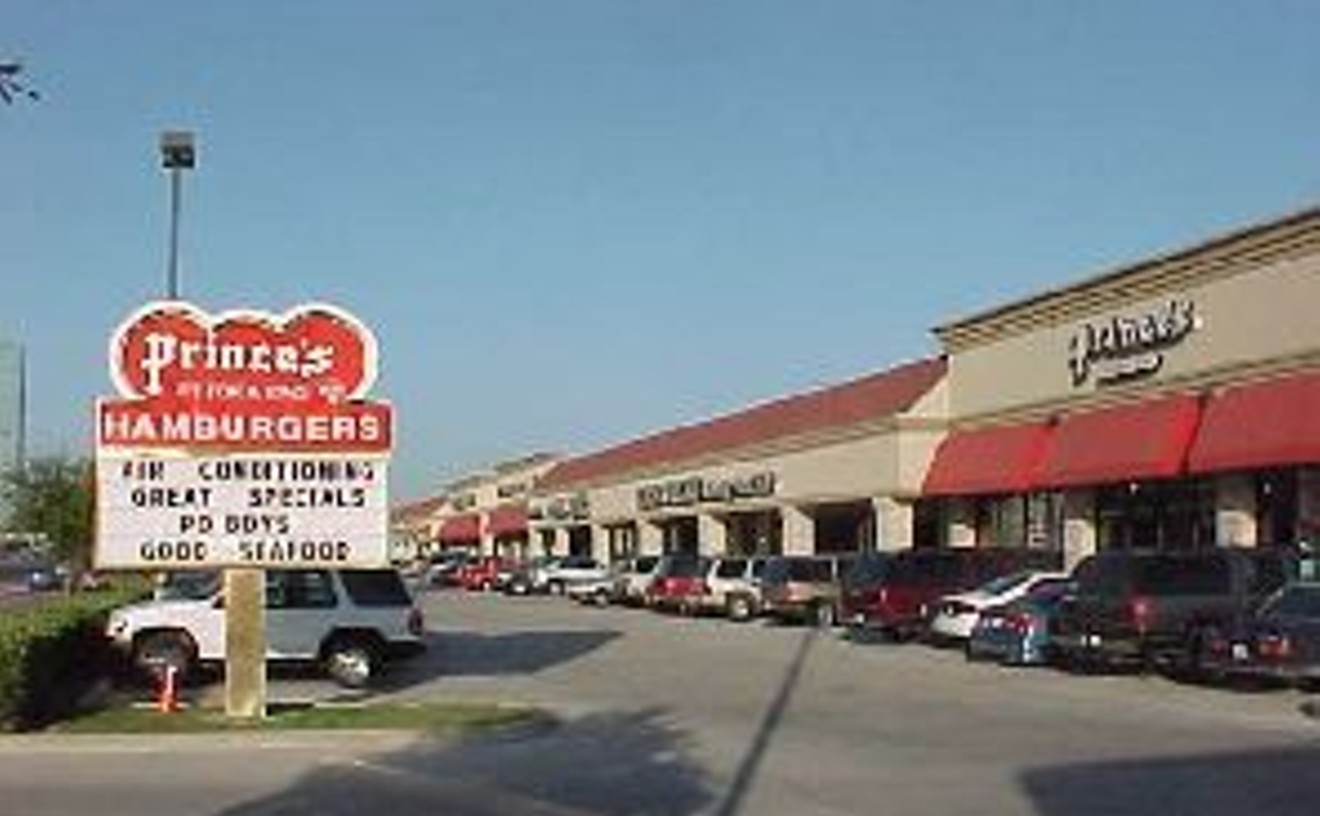 A pioneer in curb service, the old Prince's Drive-in on Main Street was the place where Houstonians went to hang out in their cars. The new Prince's doesn't have carhops, but the retro burger-joint decor pays homage to the original with displays of historic photos, old menus, vinyl booths and classic Formica. It also features some nostalgic menu items such as the chocolate malted and the Original, a hamburger doused with Prince's sauce, which looks like a slurry of pureed fresh tomatoes. Big eaters will want to try the King's Favorite -- a half-pound patty with chili, cheese and grilled onion on the top, and lettuce, tomato, pickles, mustard and mayo on the bottom. 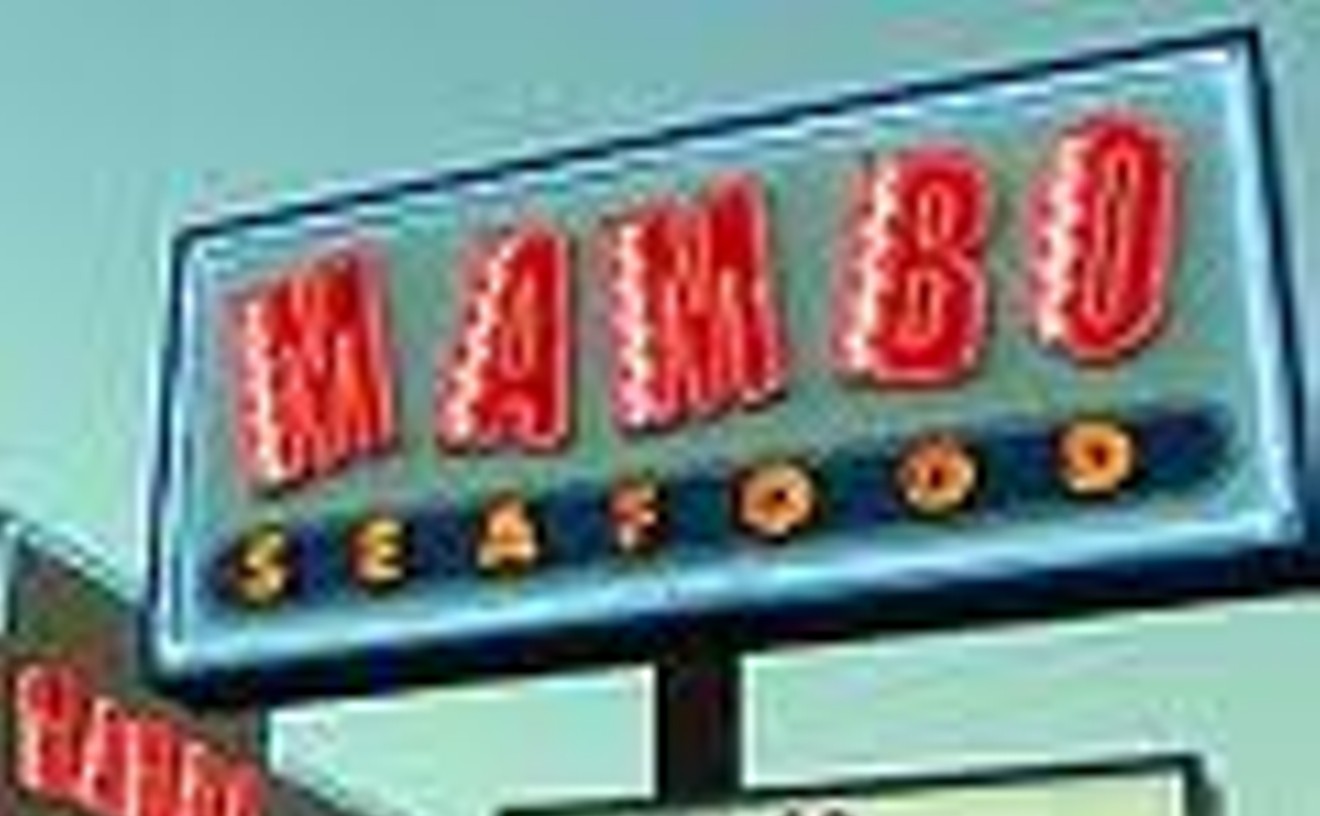 Ceviche has to be the simplest way to prepare fish. All you do is marinate it in lime or lemon juice with some hot peppers and salt, and the result is fish that's both chewy and tender. At Mambo,
they are true to the tradition of serving ceviche made with only white fish, uncomplicated by any other kind
of seafood. (Otherwise it becomes
a seafood salad.) They do, however,
add avocado, onion, cilantro and tomato, creating interest and a sublime fresh flavor. Two TVs constantly tuned to soccer, live music on weekends, arepas (corn patties) served with everything, large portions and great value in a relaxed atmosphere all make Mi Pueblito a favorite of local Colombians. Regulars prize the ajiaco bogotano (chicken soup with three kinds of potatoes), and the bandeja paisa plate, which contains a little of everything, is legendary for its size: Steak, sausage, a fried egg, avocado, chicharrn, plantains, red beans and rice and an arepa are sure to satisfy even the hungriest of diners -- all for just $7.65.

Maybe it's because the shops were born right here in Houston. Maybe it's because it's still a family-run business and there really is a Mr. Shipley who oversees the 200 or so company-owned and franchised stores. Maybe it's because Shipley's hasn't changed its recipe much in more than 70 years. Whatever it is, these folks know how to make a great doughnut. Whether it's plain or glazed that makes you salivate, iced or sugar-dusted, cream or jelly-filled that populate your daydreams, Shipley's has a doughnut you can't resist.

The big puffy buns tighten around the slippery burger patty, keeping the sandwich hanging together perfectly even though the half-pound of fresh-ground USDA Choice sirloin is extremely juicy. Garnished with lettuce, tomato, mustard and mayo and served in a basket with fries, this is a classic Texas burger. Add cheese or guacamole for 75 cents, bacon or venison chili for 95 cents. Live music, cold draft beer in schooners and a saloon atmosphere do wonders for the flavor. The Armadillo Palace's burger utterly outclasses the offerings at Goode Co.'s other burger joint across the street. 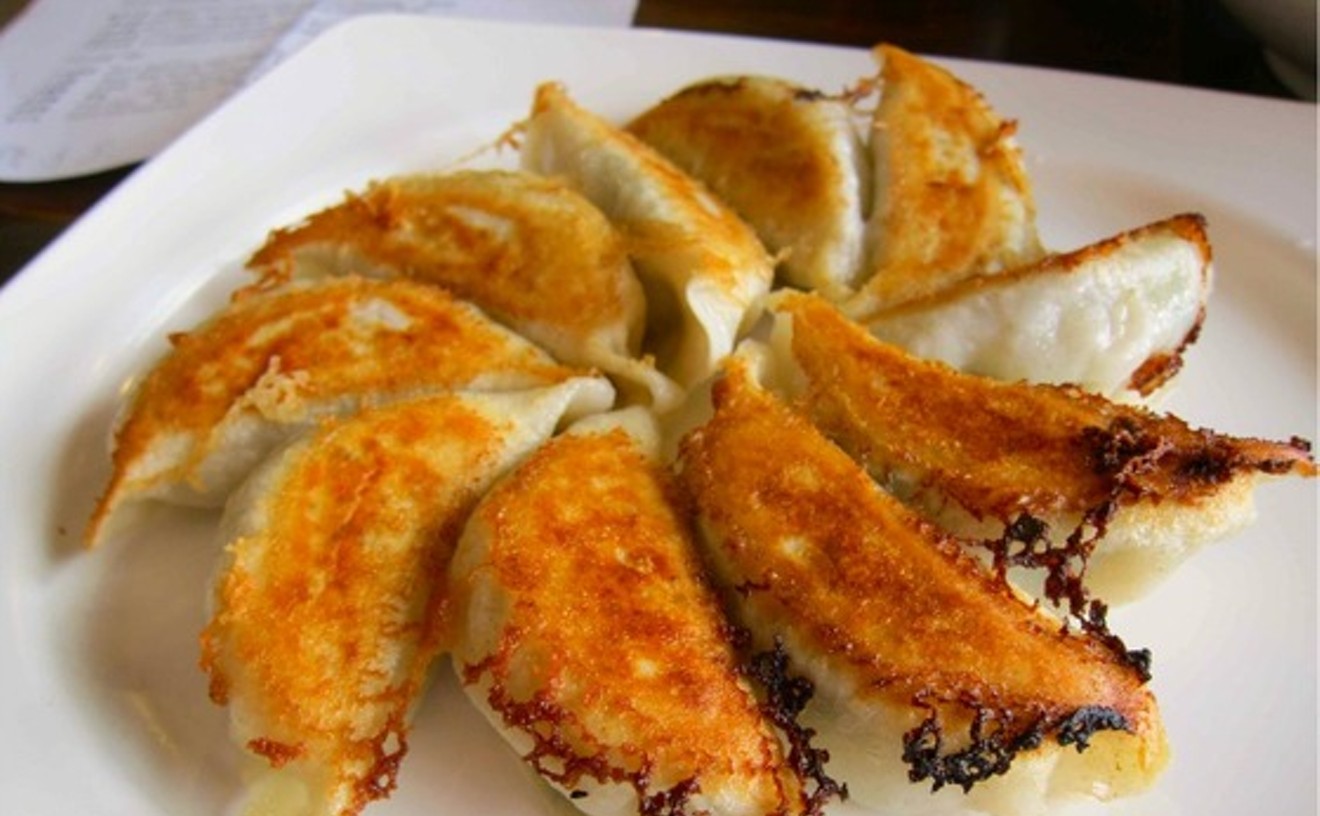 Photos by Mai Pham
Korean barbecue is an after-hours tradition. You wind up a long night of partying by gathering your gang around a grill set in the center of a large table, and everybody takes turns cooking. Favorite meats are bulgogi and wang galbi -- marinated steak and marinated boneless short-rib meat. Arirang's advantage over Houston's other Korean restaurants is a picnic-grove motif and a two-story interior. It's not only a clever design, it's also uniquely suited for indoor grilling -- the smoke and grease from the grills have plenty of room to rise. The grills aren't lit at lunchtime, but there are some great deals on bento boxes and buckwheat noodles at midday. 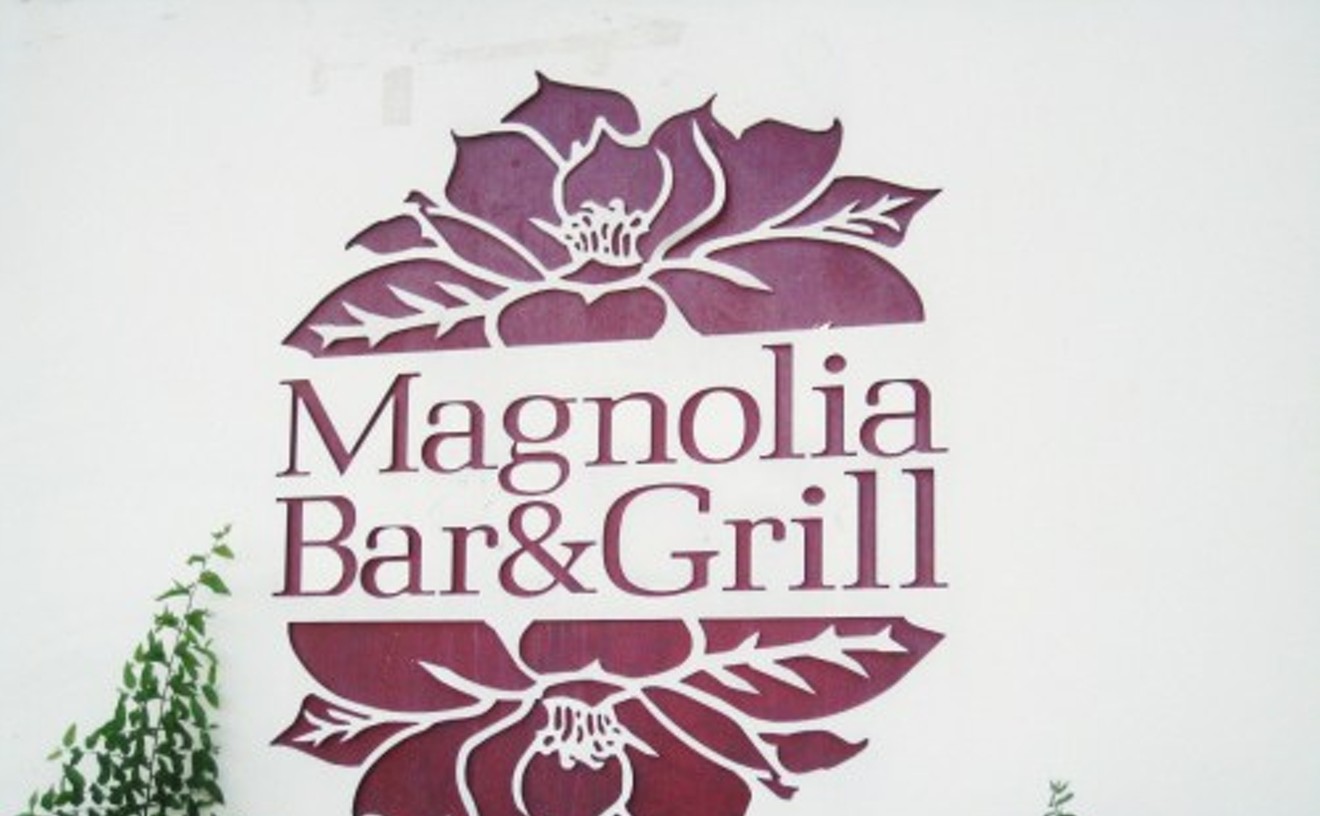 Magnolia Bar & Grill opened in 1983 during Houston's Cajun-restaurant frenzy, the same boom that got the Pappas brothers and Tilman Fertitta started. Most of the Cajun restaurants that opened back then compromised on the spicy Cajun flavors to become family-friendly -- but not Magnolia Bar & Grill. The food here tastes exactly the way it did 20 years ago -- rich, spicy and outrageously delicious. Try the fresh red snapper, the pee-wee soft-shell crabs, the roasted duck, the gumbo and the touffe. The "crab maison salad," made with a rmoulade recipe stolen from Galatoire's, might be the best crab salad in Houston.