Led by vocalist Rob Halford, Judas Priest brought its 50 Heavy Metal Years tour to the 713 Music Hall last night. The show was full of deep cuts along with fan favorites. All killer, no filler. Photo by Violeta Alvarez
Those who were around during the late ‘70s may remember a “Saturday Night Live” sketch that depicted a Mexican game show called “Quién es Más Macho?” Contestants Gilda Radner and Ricky Nelson had to decide, when quizzed (en español!) by host Bill Murray, who was more macho, Fernando Lamas, Ricardo Montalbán, David Janssen, Lloyd Bridges, or Jack Lord? For those keeping score at home, the winner was Bridges.

If there were a 21st century musical version of this concept, Judas Priest would no doubt be the winner of “Quién es Más Metal?” Last September, Priest guitarist Richie Faulkner suffered an aortic aneurysm while onstage but finished the show before being carted off to a hospital for ten hours of open-heart surgery. Later, Faulkner told Rolling Stone that parts of his heart "were replaced with mechanical components,” adding, "I'm literally made of metal now." To paraphrase Chandler Bing, could Judas Priest be any more metal?

Judas Priest guitarist Richie Faulkner masterfully recreated the riffs of yore.
Photo by Violeta Alvarez
The answer would be an emphatic “no.” The band’s 50 Heavy Metal Years tour arrived at the 713 Music Hall last night, and it was an evening both celebratory and melancholy. Coming off its recent induction into the Rock and Roll Hall of fame, Priest was full of piss and vinegar right out of the gate. Paying tribute to a five-decade legacy, the band pulled out a number of deep cuts, performing many songs for the first time in years to the delight of longtime fans. Unfortunately, for a band which made its name on a distinctive twin-guitar attack, neither of the musicians who wrote and played the crushing riffs that made the band famous were onstage.

Guitarist K.K. Downing resigned from the band in 2011 (though he later said it was all a misunderstanding), and Glenn Tipton was forced to end his touring days in 2018 as a result of Parkinson’s disease, though he still remains a member of the band and appears onstage when he is able. In their place were two (relatively speaking ) youngsters, the previously mentioned Richie Faulkner and producer / guitarist Andy Sneap, known for his work with metal bands Megadeth, Killswitch Engage, Opeth, Accept, and Dream Theater in addition to Judas Priest.

The voice – which many consider to be the best ever in heavy metal – is still there in most of its glory, loud and strong, though maybe not scaling quite the heights achieved during Priest’s heyday. Still, Halford’s instrument is pretty impressive. As a contributor to Reddit asked, “How the fuck can Rob Halford still hit those high notes?”

Rob Halford, the Metal God, hitting one of many high notes last night at the 713 Music Hall.
Photo by Violeta Alvarez
A hit from the early ‘80s, “You’ve Got Another Thing Coming,” appeared early in the set, but by and large, the band served up tunes that might not have been familiar to the casual fan. Faulkner took most of the leads during the first part of the set, but he and Sneap were soon trading lines back and forth, tighter, as they say, than a duck’s ass. The two guitarists worked in a bit of tapping à la Eddie Van Halen and Randy Rhodes, but the relatively modern touches enhanced rather than detracted from the old-school vibe which characterized the proceedings.

Though terms like “professional” and “polished” might be anathema to some metal fans, these are the words that must be used to describe the performance. The Priest guys know what they are doing. Pacing, choreography, stagecraft, audience interaction – all were accomplished in a smooth but decidedly genuine manner. Continually roaming an industrial-themed stage accented with oil drums, gas cannisters, and electrical panels, Halford led the band through a crisp set, one that did not contain any “bathroom” songs. The fans were on their feet throughout, and between each song, a forest of “metal horns” was raised by the faithful.

Rarely have I seen a more satisfied crowd. After a closing blast of “Hell Bent for Leather,” “Breaking the Law,” and “Living After Midnight,” the hard-core fans left happy and satisfied. Judas Priest had fulfilled all expectations and then some. As has been said, “Priest is so metal that they should have a spot on the periodic table.” 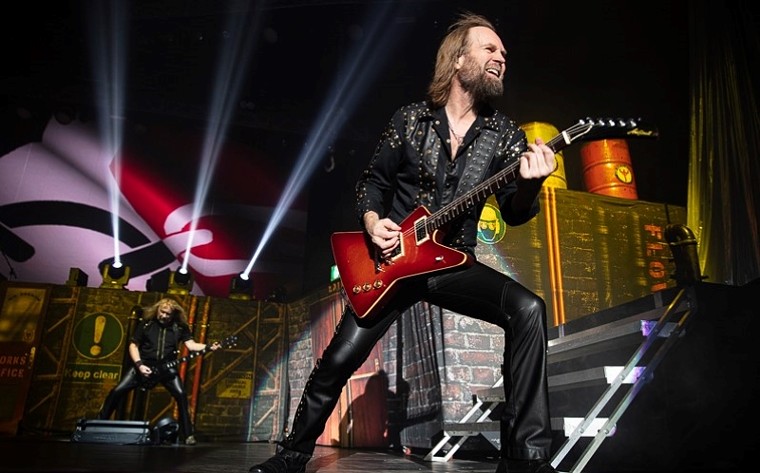 Guitarist Andy Sneap mesmerized the crowd with blazing lead guitar throughout the evening.
Photo by Violeta Alvarez
Things That Didn’t Fit In But Shouldn’t Be Left Out:

What a collection of T-shirts! Metallica, Danzig, Sabbath, Mercyful Fate, Testament, Iron Maiden, the Grateful Dead, and more were represented in the crowd. And speaking of throwback fashion, I swear I saw one fan in a Members Only jacket.

A youngish couple standing next to me said that they were excited to be seeing Judas Priest for the first time. The man, Martin, added, almost apologetically, “We figured we’d better do it before it’s too late.” Such is the state of classic rock these days.

And what was the deal with the huge inflatable red-eyed bull that appeared onstage during the last couple of songs? Sure, Pink Floyd had their mondo porcine inflatable, but that was related to a song title. What was this? A bit of research produced an answer. According to Halford, the bull is a symbol representing the band’s hometown of Birmingham, located in the English Midlands. Er, OK. But a bit of explanation might have been helpful. Some of us thought we had wandered into the rodeo by mistake.

Lots of air guitar all around. A gentleman next to me, obviously a skilled soloist on the non-instrument, took things a step further by whipping around hair that he no longer possessed.

The Hellion / Electric Eye
Riding on the Wind
You’ve Got Another Thing Coming
Jawbreaker
Firepower
Never the Heroes
Beyond the Realm of Death
Judas Rising
Devil’s Child
Genocide
Steeler
Between the Hammer and the Anvil
Halls of Valhalla
The Green Manalishi (With the Two-Prong Crown)
Screaming for Vengeance
Hell Bent for Leather
Breaking the Law
Living After Midnight
KEEP THE HOUSTON PRESS FREE... Since we started the Houston Press, it has been defined as the free, independent voice of Houston, and we'd like to keep it that way. With local media under siege, it's more important than ever for us to rally support behind funding our local journalism. You can help by participating in our "I Support" program, allowing us to keep offering readers access to our incisive coverage of local news, food and culture with no paywalls.
Make a one-time donation today for as little as $1.