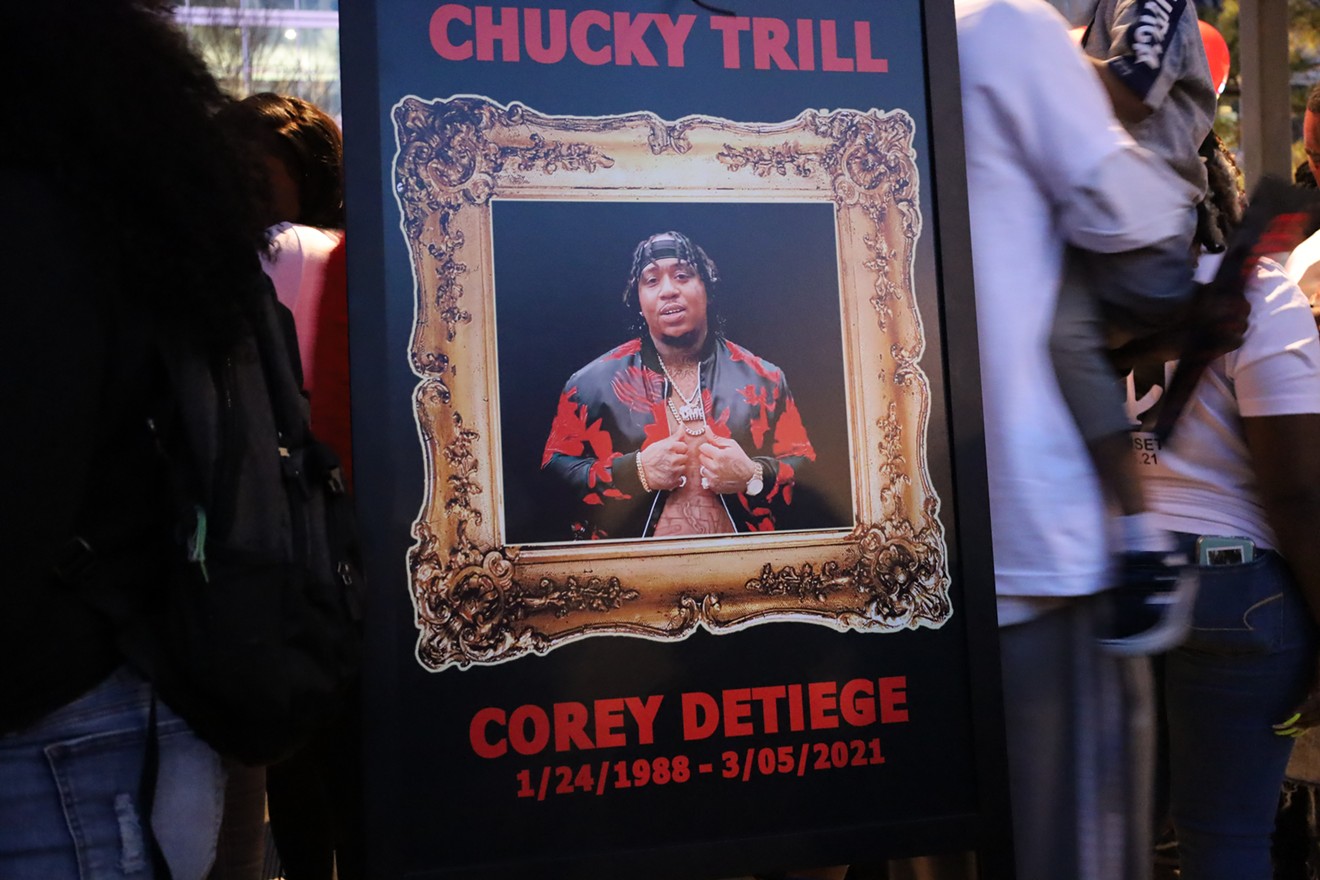 Friends and Family meet in Discovery Green to celebrate the life and legacy of Corey "Chucky Trill" Detiege. Photo by Rene Fernandez
The sun set slowly on Discovery Green Tuesday as family, friends, and fans gathered to pay their respects to  rising Houston rap star Corey “Chucky Trill” Detiege, who died in a Georgia hospital Friday after being shot while traveling to perform at an event for the NBA All-Star weekend.

As Tuesday night's darkness closed in, people crowded around a large centerpiece dedicated to the rapper and tried to get photos before the light expired. Fans carried  pictures of the Houston MC as well as Chucky dolls and balloons brought to be released in the slain lyricist’s honor.

Trill released his album, Music for the Soul, a few years ago and was quietly working to build up his star power in the city and beyond. He was shot around 3 a.m. last Friday while traveling on Interstate 85 in suburban Atlanta. There have been no arrests in his shooting.

When news of his death spread to Houston, social media exploded with shock and condolences as friends and family tried to come to grips with the fact Chucky was gone. The young man, son of D from the Trinity Garden Cartel, was building a buzz with songs like "Situations," "Hall of Fame" and "Streets Don’t Love a Soul."  While his music was what garnered him attention, it is his behind-the-scenes persona that will be missed, friends and family said, speaking about how his being a good person trumped ideas of fame and fortune.

“I was his manager and his friend. He was very passionate about his music and I got a chance to see early on how much of an impact he had,” remembered Bone. “I know he touched a lot of people. Everybody said he was a good guy because he was. It’s good to see all these people come out and support him. Chucky was a star. He was born to do this, but he was humble. That’s what you have to have in this business. You can’t be bigheaded. He wasn’t. You can ask anyone he came in contact with and they’re going to say he was a humble dude. That’s the piece you need to have to make it in this business and that’s the piece that he had.”

Producer and songwriter KeLo was not just impressed by Chucky’s humble nature, but also his willingness to help others.

“When he came out of jail one of his cousins brought him down to my radio show. He had only been out two weeks. He freestyled and talked about his story and we just started to relate with one another. I had a homie going into jail at that time and Chucky took the time to say some words to him. It just touched him. Chucky showed up to my friend’s hearing and he didn’t even have to do that. He stood up for that young man and that just always stood high in my mind. He kept coming to the radio show and we just became brothers. He is forever in my heart. That’s my guy. He was true to his word. He was true to his craft. He was a guy that came up with a plan and made sure to execute that plan. He will forever be remembered as someone who really came, saw, and conquered.” 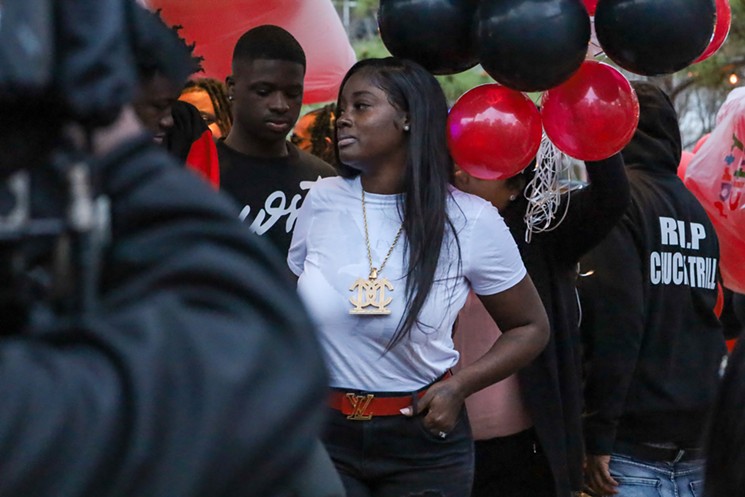 Cherish Detiege looks over the crowd that has gathered to honor her late husband's life.
Photo by Rene Fernandez
Chucky made fans of many Houston artists that wanted to see him succeed. Artists like Bun B, Lil Flip, ESG, Doughbeezy and more spoke highly of him. He even made a fan of an artist he looked up to when starting on his rap career.

“I knew him as being a great artist from the city,” remembers Scooby of the Grit Boys. “We got cool just running into each other. He always said he respected my music, and he was listening since middle school. I supported anything he had going. This shouldn’t have happened. He is still going to go down as one of the dopest artists in Houston. He had the lyricism and the cadence. He was the total package and those guys only come around once in a while.”

Henry Darragh, the leader of the band Doc Loc and the Swangers, only met Chucky once but that meeting left such a lasting impression that he had to come and pay his respects.

“I met Chucky last Thanksgiving at a DJ Screw presentation. I was struck by his humility. I was a fan of his music, so I was just glad to meet him. I was surprised he matched my energy saying he was a fan of me. He was just authentic. He told me to go get my grill so we can take a picture and I just really value that meeting because I am such a fan of his music. I’m just here to support those that loved him and those that are grieving. He lives on through his music.” 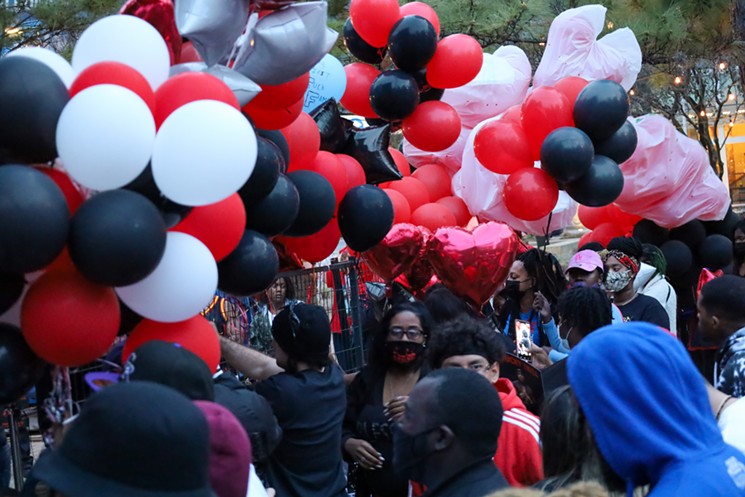 Fans gathered with balloons to be released in memorial of Chucky Trill.
Photo by Rene Fernandez
Chucky was a rising star who had no problem speaking his mind. He recently appeared on the Donnie Houston Podcast and in the interview expressed his feelings on fame, fortune, and building his legacy.

“I have people really depending on me. I care what people think about me. If I was the black sheep or the troublemaker of the family, I want people to look at me and say he really changed his life. He really made it. He’s his daddy’s son. My daddy the type of person that’s going to do whatever he says he’s going to do. That’s how I rock.”
KEEP THE HOUSTON PRESS FREE... Since we started the Houston Press, it has been defined as the free, independent voice of Houston, and we'd like to keep it that way. With local media under siege, it's more important than ever for us to rally support behind funding our local journalism. You can help by participating in our "I Support" program, allowing us to keep offering readers access to our incisive coverage of local news, food and culture with no paywalls.
Make a one-time donation today for as little as $1.