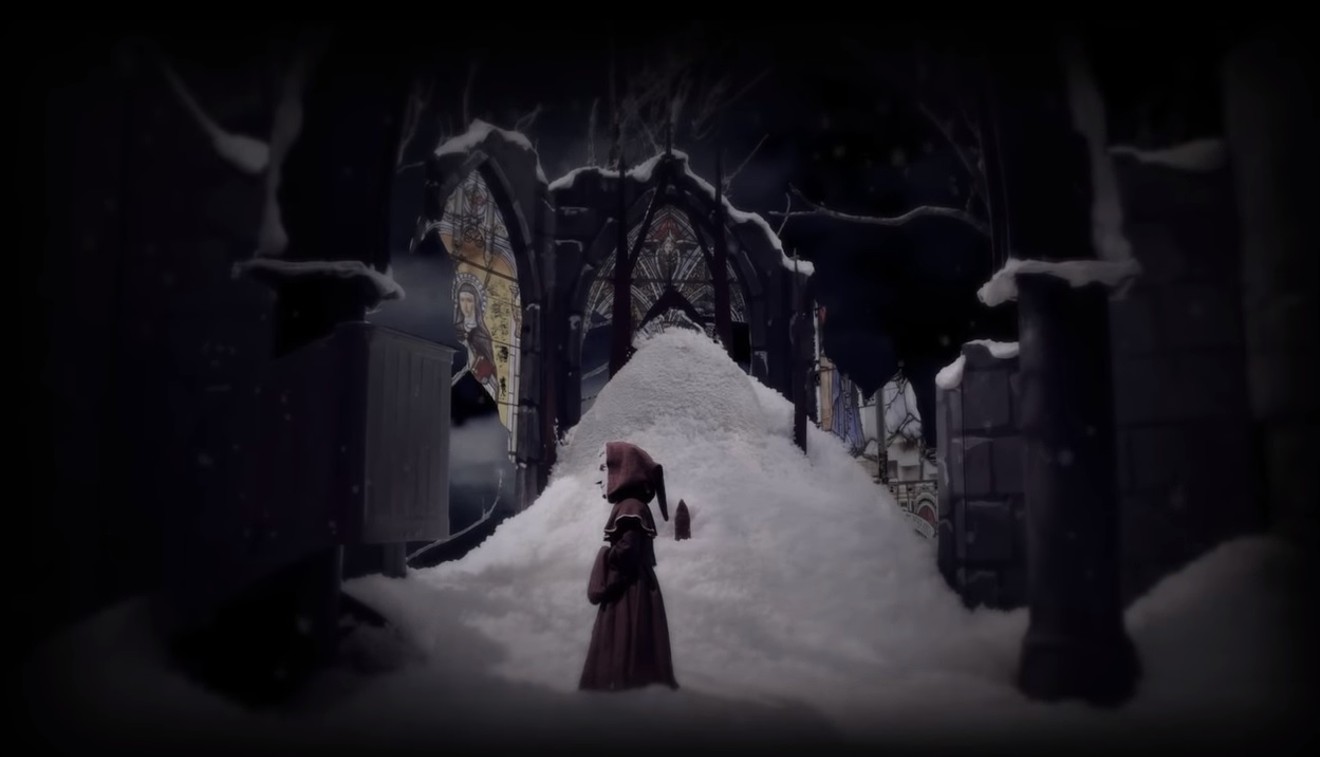 Time to get cold and spooky this Christmas Screencap from Erasure's "Gaudete"
Back in 2011 I looked at some of the Christmas tunes from various goth and goth-adjacent artists in order to darken up the holiday a little. It’s been a while since then and I thought it was time for an update. Here are ten more songs to keep things spooky this Yule when you just can’t hear “Grandma Got Run Over by a Reindeer” one more time without taking a shot of absinthe.

With The Cure making it into the Rock and Roll Hall of Fame this year I thought we’d open with them. Robert Smith mentions Christmas is a surprising number of lyrics, and this single from 1982’s Japanese Whispers is one of them. Plus, I’m kind of hoping one day someone will do a lounge piano duet version for a male and female voice so that we can finally put away “Baby It’s Cold Outside” for something better.

Not only to Vince Clarke and Andy Bell absolutely kill this old Latin carol, it comes with an incredible stop motion music video from Martin Meunier and Tonya Hurley. The whole Snow Globe album is a winner, but this is by far my favorite cut.

I know I’m dancing on the edge of goth with Yazoo, but check out this performance of “Winter Kills” by Alison Moyet from 2015 in Berlin. It takes a bleak seasonal tune and gives it a whole new depth that chills a listener to the bone. For when you absolutely need to watch a Christmas Tree burn, except no substitutes.

But even Moyet must make way for Nick Cave. Coming off 2001’s No More Shall We Part, it’s the highlight of the album. Cave has always loved winter imagery in his work, but few songs evoke the season in his trademark macabre style like this one does. Plus, there’s all kinds of deep religiosity lying about for those that like to keep Jesus as the reason for the season.

Here’s an obscure one for you. Valentine Wolfe’s The Ghosts of Christmas Past is a haunting collection of dark holiday settings. Like Erasure they tackle “Gaudete,” but the style here is much more classic. I prefer this track, which reaches down through history like a restless spirit.

This is another classic carol, this time done by one of the biggest names in goth. It was a B-Side to “Melt” off of 1982’s A Kiss in the Dreamhouse, but as you can see it did warrant a simple official video with the band appearing. It’s a pretty piece that is halfway between a pop and classical setting, and Siouxsie does the French carol justice.

I don’t have anything new to say about Apocalyptica. If you like spooky strings you’ll love this.

Most songs get pretty goth when you put them in a minor key, and “Jingle Bells” is no exception. You’ll ever hear the song quite them same ways after Mucenieks gets done with it.

Everyone should know that Christopher Lee spent the last years of his life recording metal music largely inspired by his ancestor Charlamagne. He took a detour into Christmas music, too. Frankly, Lee can say this is no gift fit for a king all he wants, but as far as I’m concerned no one is awesome enough to deserve something so amazing.

I can’t believe I forgot this tune back in 2011. One of the minor but excellent cuts from Floodland, “Driven Like the Snow” is one of the ethereal Andrew Eldritch songs that sets a stage like no other. It always makes me think of being on the empty Houston highways after a family gathering as I head back to my own little bat cave. It’s lonely and wonderful, as Christmas so often is. Happy holiday, darklings.
KEEP THE HOUSTON PRESS FREE... Since we started the Houston Press, it has been defined as the free, independent voice of Houston, and we'd like to keep it that way. With local media under siege, it's more important than ever for us to rally support behind funding our local journalism. You can help by participating in our "I Support" program, allowing us to keep offering readers access to our incisive coverage of local news, food and culture with no paywalls.
Make a one-time donation today for as little as $1.