Houston Music and Fashion Gets a Welcomed Burst of SEROTONIN 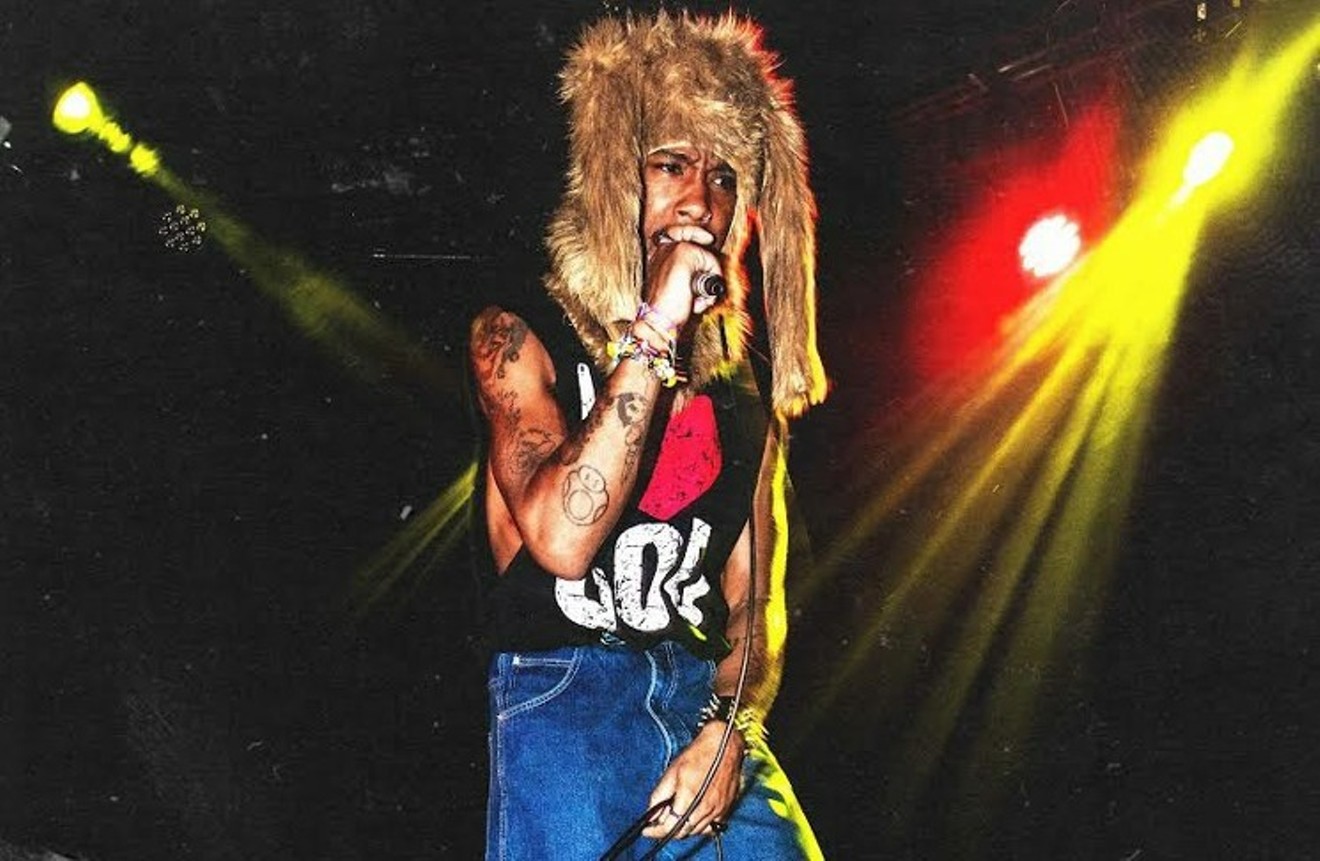 SEROTONIN Photo by notokphotos, courtesy of SEROTONIN
The mistake we make about visionary artists is believing the way we view them makes them visionary. Houston artist SEROTONIN is a good reminder that how artists see themselves and the community around them is what truly sparks imagination and insightfulness. The 24-year-old musician and apparel designer has mined his own mind and leaned into a community of fellow creatives to do some visionary things.

Born and raised in Houston, SEROTONIN said he was about 9 years old when he first got interested in music. His mother, Samantha, was a member of the choir at St. John’s Downtown, the home church of members of Destiny’s Child. He said being around Kelly Rowland and Beyoncé  made an early impact, but not as great as the one made by his mother. He said his own budding career as a hip hop artist is an extension of her dream.

“My mother was actually an aspiring singer and I would always be with her whenever she was producing her music and she was in the studios,” he said. “After a while, she got a little bit sick and she wasn’t able to do those things and I saw how it kind of put a damper on her. Once I got to understand the development of music and how the process really works, I was like, you know, I want to try to live out my mom’s dream and try to pursue the things, with her health and her mental health, she couldn’t follow up with. That was what really inspired me and sparked me to even really pick up making music. My mom was really interested in this, she’s putting her soul and her passion into it — let me grow a connection with it as well so I can communicate to her through this.”

He said he was a junior in high school when he started recording music with friends, using software like Logic and going to shows at Warehouse Live and White Oak Music Hall to see performers do what he aspired to do.

“There was a real big gap of the how-to,” he admitted. “We thought it was super extreme to put that together and as we got older, you know, we see the equipment that’s being sold at Guitar Center. We see the speakers, we see the mixing board, we see everything that we would need to actually present ourselves. So, I started investing.”


SEROTONIN said he and a group of friends pooled their money to buy equipment and do D.I.Y. shows. If someone’s mom was out of town, they’d play a show in that family’s garage and he said “it went from a way to just hang out to, wait, no, this music is actually really good, this is worth paying attention to.” He said that “over time it just evolved with trying to give the customer, the consumer, the audience a way better experience than the last time.”

It’s still a music ethos SEROTONIN is comfortable in, that do-it-yourself space that suits many Houston artists like him quite well. To showcase music he’s prolifically created on collections like 2019’s Player's Reunion, 2020’s Fucking Puke, and last year’s POSSUM SOUP to name but a few, he’s performed in punk and alternative spaces. He said his favorite venue is the venerable Super Happy Fun Land, where he had his first official venue show.

“I love them because what they allow to come through those spaces and be shared is like, dude, you can go there and say anything, you can go there and play anything. That’s what made me start to wonder, okay, if we have these spaces where we can actually do what we want, let’s see how far we can go with it. So, I tried to make it a mission to incorporate different sounds. If I threw a show, it would be a punk show with a DJ and a rapper just to show people, okay, we’re on different spectrums but it’s a parallel. When they see how it works, when they see – ‘Wait, this is cool over here,’ — it makes that community just radiate.”

The artist’s newest album, due at the top of 2023, has the working title D.I.Y. Do It Yourself. He’s begun to release videos for tracks from the album, including “River,” his most recent visuals release, and “F*ck a Job,” his debut video. That video was shot and directed by local photographer and videographer Derek Rathbun and features cameos from many of SEROTONIN’s friends, exciting young Houston artists like Ishgenius from No Empathy Records, Salvia Salvere and members of the punk band BOZOS.

“I was working at Texas Art Supply and I was like, you know, let me pursue my passion full time. So I wrote the narrative of how I was feeling in that song and I was like, man, I really want to use this song as an opportunity to kind of showcase or time stamp what’s going on here in Houston,” he said. “I stay right here in EaDo, right by East End Barber, and I was going to Kroger on the bus one day. I was walking in and I saw Jeffer (Thomason) from House of J walking out. I was like, ‘Oh my God, I eat their pizzas! Wow, this is where they get their ingredients! My neighborhood grocery store is my venue’s grocery store!” And then, Super Happy’s right down the street, so I was like, oh yeah, this Kroger on Polk, this is the focal point, this is the meeting ground for all the community.

“I hit up Derek and I was like yo, me and the guys really would like to show the story of this song and we have the perfect spot. He did the treatment very fast, I’m talking about two or three days. He got us a great treatment together. This is the ironic part, the shooting day that we filmed was on Labor Day. That wasn’t even planned, even with the whole theme of the song.

SEROTONIN can appreciate hard work as someone who’s grinding in more than one creative medium. In 2016 he started Univerdge Clothing, a streetwear brand that, like his music, aims to deliver a message.

“I had a very different approach when I first started. I would get a lot of stuff mass produced and I was wondering, you know, I’m getting all this product and I can create my website, I can sell it in person, but I’m still sitting on a lot of it,” he said. “When times get hard I have to go to the drawing board and make adjustments, so I was like, okay, I want every piece to be special. At the time I was only doing screen print and then when I did do my mass production it would be like those small two-by-three embroidery patches. I was like, I wanna give my customers more, I really, really want to show them how I feel. Luckily, my girlfriend and my grandmother taught me how to sew and use hand embroidery.” 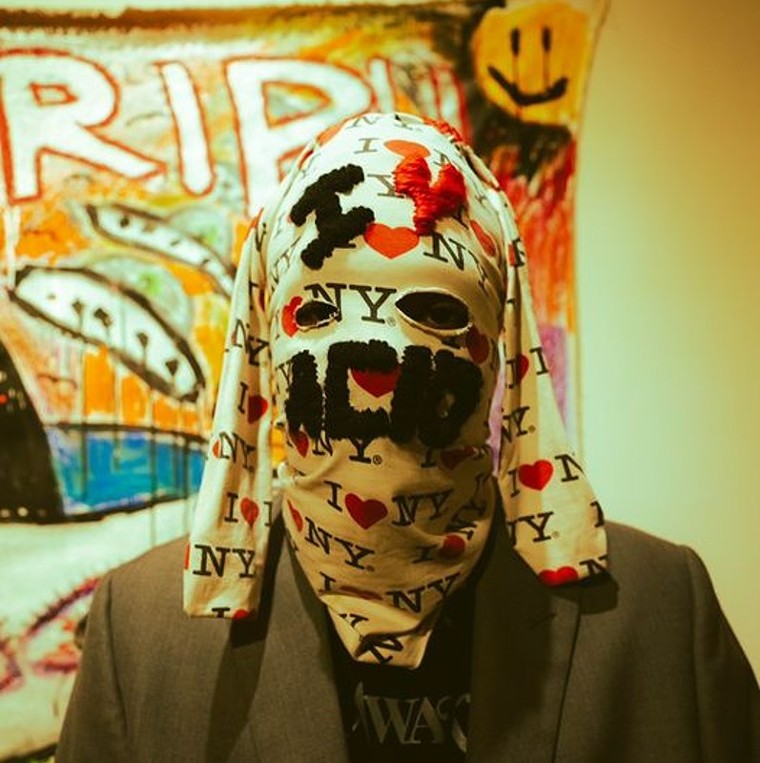 By chemical design: SEROTONIN said psychedelics have enhanced his life and influenced his art
Photo by Ben White, courtesy of SEROTONIN
That allowed him to pivot to couture pieces instead of full-sized runs. He said he’d shop area thrift stores and boutiques to find pieces to adorn with messages and statements.

“I would go collect these hand knits and these hoodies and these exotic tie-dye tees and I would just put this messaging on them like ‘Eat the Rich,’ ‘Let’s Slay Demons,’ – you know, like playing off of the psychedelic standpoint but still trying to put some inspiration in there or some punk positivity, you know? I want to let the consumer know it’s okay to be cool and dress cool, but at the end of the day have some substance with it.”

Univerdge, he said, “means merge with the universe. It’s inspired by psychedelics a lot because that’s where the journey of finding out who I was and understanding the world, that’s where it started for me. I try to, in subtlety, pay homage to it for what it’s done for my life in making these garments. If a person actually wants to discuss it or ask questions about it I can let them know my perspective or things that I’ve experienced. You know, just be a vessel for the universe.”

Like a visionary, SEROTONIN is able to spread his message in multiple ways, on record, in film and especially at shows where he performs live and operates as a vendor. He said Univerdge will next represent at the Don’t Mess With Texas ’22 Toy Drive on December 17 at The End.

SEROTONIN has burst onto the Houston arts scene as a way to honor his mom and his own truths through psychedelic exploration. Most of all, he said, he’s working to build his own place in one of his favorite places.

“I’m going to just buckle down, focus on the album and keep giving the people the products for right now,” he said. “I have a real huge love for this Houston community. I think it’s going in an amazing direction. I’m happy to see things the way they are.”
KEEP THE HOUSTON PRESS FREE... Since we started the Houston Press, it has been defined as the free, independent voice of Houston, and we'd like to keep it that way. With local media under siege, it's more important than ever for us to rally support behind funding our local journalism. You can help by participating in our "I Support" program, allowing us to keep offering readers access to our incisive coverage of local news, food and culture with no paywalls.
Make a one-time donation today for as little as $1.