At 7:30 on a January night, it’s dark out front of Houston’s Contemporary Arts Museum. The little bit of light assigned to the corner of Montrose and Bissonnet isn’t aided much by the headlights of the many cars which move through the busy intersection so a lot there is steeped in shadows. Except for Nick Gaitan. My wife and I are at the museum to hear selections the veteran Houston musician has chosen for the museum’s Winter Sound Series. Born on the city’s southeast side, Gaitan’s music talents have taken him all over the world, as both bandleader and side man, and we’re curious to learn which Chicano classics he’s boasting to museum visitors and unaware passersby in a DJ set out front of the museum. As we approach, the first song I hear is “Kiko and the Lavender Moon,” the haunting centerpiece of Los Lobos’ classic album Kiko and I think, okay, guess it’s going to be that kind of night.

The song is about magic and doing the impossible and it’s the vehicle that sets a lot of thoughts about Houston music in motion. We’ve stopped by CAMH to say hello to Gaitan and hear what’s he’s curated – good stuff like Little Joe and the Latinaires’ “El Rebelde” and, ironically, War’s “Slippin’ Into Darkness.” We can hardly see Gaitan’s face when it’s our turn for a brief hello. He greets us and remembers my wife’s name, even though he’s only met her a few times. He tells us about his next show (tonight at Truck Yard) and says we're on a standing guest list.  It’s too dark for even a photo of Gaitan delivering his DJ set but he’s not swallowed by the night. He’s bigger than the shadows because he’s “made” in Houston music, fully initiated. He’s relaxed and confident and assured in what he’s doing. 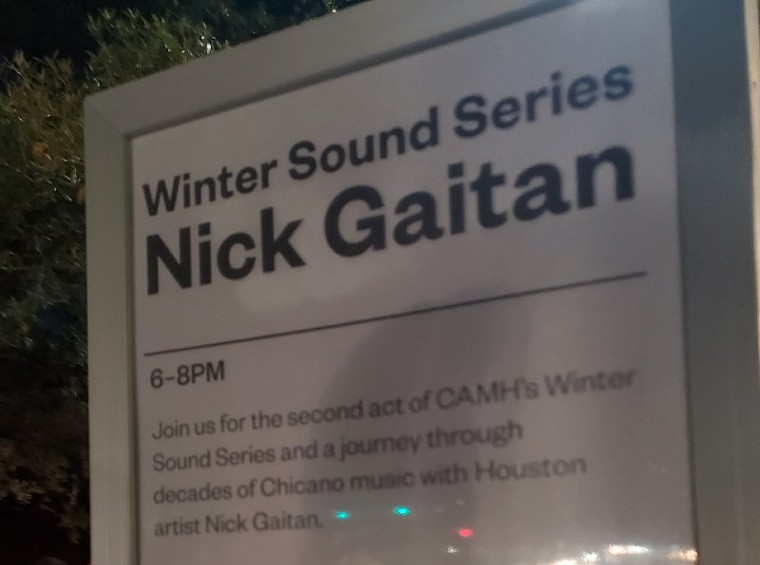 Nick Gaitan is a Houston music lifer
Photo by Jesse Sendejas Jr.
I’m taking stock of this all because we’re next headed to Big Top Lounge for a show filled with upstarts, young Houston musicians who are edging into Houston’s music circle with their own talents and efforts. I don’t expect them to be bigger than the shadows like a Houston music lifer. But, they’re eager to emerge from those hidden places and Big Top is a good place to step front and center for an intimate crowd. It’s whimsical —  rose-colored even — to set them at ease, but it’s also filled with and run by serious, accomplished, professional musicians.

That’s later, though. For now, we’re engrossed in the music and the vibe Gaitan’s established with a run of songs by the Chicano “souldies” band Los Yesterdays. A runner pauses at the corner to stretch her hamstrings and listen for a bit, her running buddy – a svelte Dalmatian – patiently waiting at her side. Folks order Umbrella Fellas hot dogs from a nearby cart for further nourishment. My wife and I go into the museum to check out the Troy Montes Michie exhibit, work by the artist which reflects on the social history of the zoot suit. As we examine the visual art, strains of auditory art form Gaitan’s turntable break through the wall. From inside, we hear Lalo Guerrero’s “Marihuana Boogie,” 1940s music that zoot suiters likely spun while they dressed up for a night out. It’s right on cue. I’m not making this up, y’all. That’s just how music works.

We’re about to leave for the Big Top show and I think about Kiko, from the song, as I spot Gaitan chatting with fans. Like the song’s namesake, he’s playing in the moonlight, conversing with black cats and flying up walls, metaphorically anyway. He’s part of the ongoing Houston music circle, people who make magic. I think about what it takes to become bigger than the shadows for local artists, it’s on my mind because we’re going to see a lineup of young acts freshly embarking on their dreams, on the same day that tickets went on sale for a massive RodeoHouston show starring Houston's own Bun B. I wonder if their dreams include selling out sports stadiums and if they’ll have what it takes to break through or even stick with it. Like Bun B. Like Nick Gaitan. Like Christian Kidd, the heart of The Hates, whom I'll be profiling next week. All these Houston artists who came before them, part of a circle that doesn’t have a discernable beginning or end. 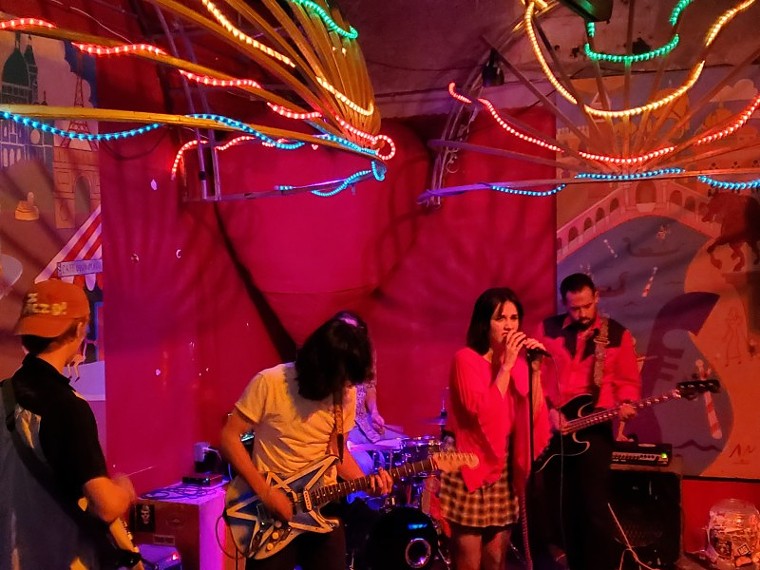 RINAS
Photo by Jesse Sendejas Jr.
I don’t have to wait long for an answer. The first set comes from Max Diaz, a singer/songwriter with a bit of a grunge edge. He’s delighted when I tell him I heard Nirvana and Radiohead influences in his work. His songs aren’t sleepy, they’re vibrant and thoughtful. A woman filming the set on her smartphone cries when Diaz sings a song called “Phoenix,” with lyrics about longing and lost opportunities but also hopes and dreams. It’s a highlight of Diaz’s very good set. We’re surprised to learn he’s only 18 because throughout his half-hour he’d say “this is an old one” before introducing songs about prostitutes and such. And also because he’s confident onstage and off. There’s a little bit of swagger. Not enough to swallow the shadows, of course. Not yet. But maybe one day.

At one end of Big Top’s bar was Allen Hill, another Houston music pro, lots of bands and countless gigs under his belt. He’d booked these bands into this room. At the opposite end was Diaz and band. It was hard not to connect a straight line between them, one being a professional musician and the others striving to be. Max Diaz plans to keep marching into Houston’s music circle. His next gig is at The End at the end of the month with Dallas alt-rock act Aberdeen is Dead.

The next band was RINAS, a five-piece rock act that sounded like Garbage – the good way - with vocalist Marina Soliz playing Shirley Manson. RINAS was a little off in its set, the timing between band members wasn’t exact, but that didn’t matter. What matters about RINAS is it is putting in the work. They play lots of shows, seemingly unafraid to enter any venue to be heard. If you’re going to be big in this business, if your aim is to have longevity, to not have to sit behind a desk or clock in and out at a 9 to 5, you have to do the work. Commitment, rehearsals, learning from what worked and what didn’t. RINAS is putting in the work. And having fun. They have shows practically every week of this month, including one tonight at Lazy Daze, a coffee shop in Pasadena, and gigs in January at 1810 Ojeman and Bohemeo’s. 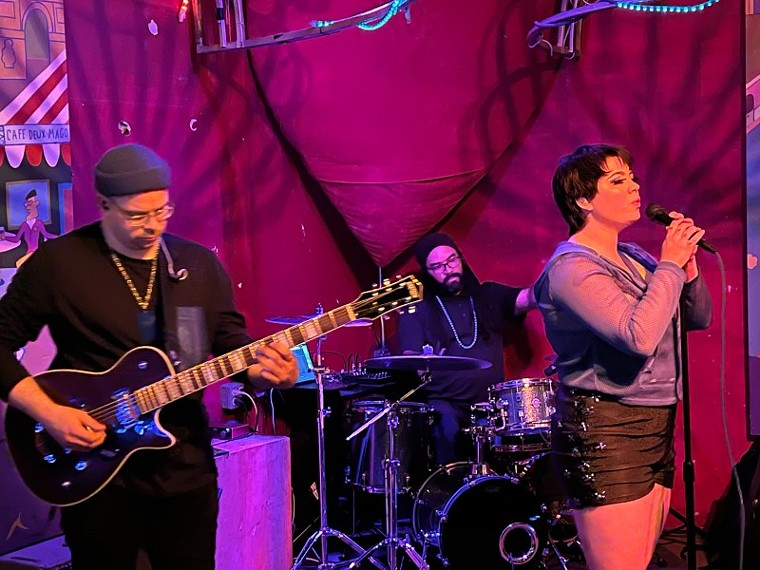 ABRY
Photo by Jesse Sendejas Jr.
The night’s headliner is ABRY, an aspiring pop singer who is probably the established music veteran of the roster. She’s an admitted favorite. Her songs are radio-ready according to this humble opinion and Mrs. Sendejas’ feet, which never stop moving throughout the set. ABRY is a skilled and experienced vocalist. You don’t have to be a Shaolin monk to know that a student becomes a master by studying the master’s moves. That’s an edge ABRY has over some acts. She’s deeply devoted to the pop genre in a city that doesn’t exactly churn out pop stars (oh, but when we do: see Beyoncé).

During “Already Gone,” a song at the top of my ABRY playlist, my wife leans in to ask if I remember being at Free Press Summer Fest one year, positioned at a small stage for an afternoon set that began with sparse attendance and ended with a roaring crowd for an artist named Lizzo. Of course, I remembered. She nods her head towards the stage as if to say take in this proximity to someone who could be famous, like Lizzo (also part of the Houston music circle). Famous like the people on TV, to borrow a line from a Max Diaz song.

I was thinking about this after the show, after we’d chatted with ABRY and her bandmate Micah Cadis and heard about how they’re headed for Los Angeles to do some work and how ABRY connected with one of her idols, Charli XCX, a couple of years ago and got good feedback from her about her music. We met her mom, who bought her a salad before the show and was selling merch afterwards. As parents of professional musicians, members of Houston’s music circle, we recognized the support ABRY has around her. You need that, as much as talent and drive, to get in the circle and some day loom larger than the shadows.

Out back of the venue, someone sent me a text message that Lisa Marie Presley had died. I was standing about 10 feet away from Continental Club’s huge, lighted “ELVIS” sign when the text came through. Right on cue. I’m not making this up, y’all. That’s just how music works. It’s a weird sort of magic, spooky even, like the kind in that Los Lobos song. It abounds at live shows, where Houston music artists are doing their own sorcery to become part of an unbroken circle. Don’t miss your chance to let them cast a spell on you.
KEEP THE HOUSTON PRESS FREE... Since we started the Houston Press, it has been defined as the free, independent voice of Houston, and we'd like to keep it that way. With local media under siege, it's more important than ever for us to rally support behind funding our local journalism. You can help by participating in our "I Support" program, allowing us to keep offering readers access to our incisive coverage of local news, food and culture with no paywalls.
Make a one-time donation today for as little as $1.