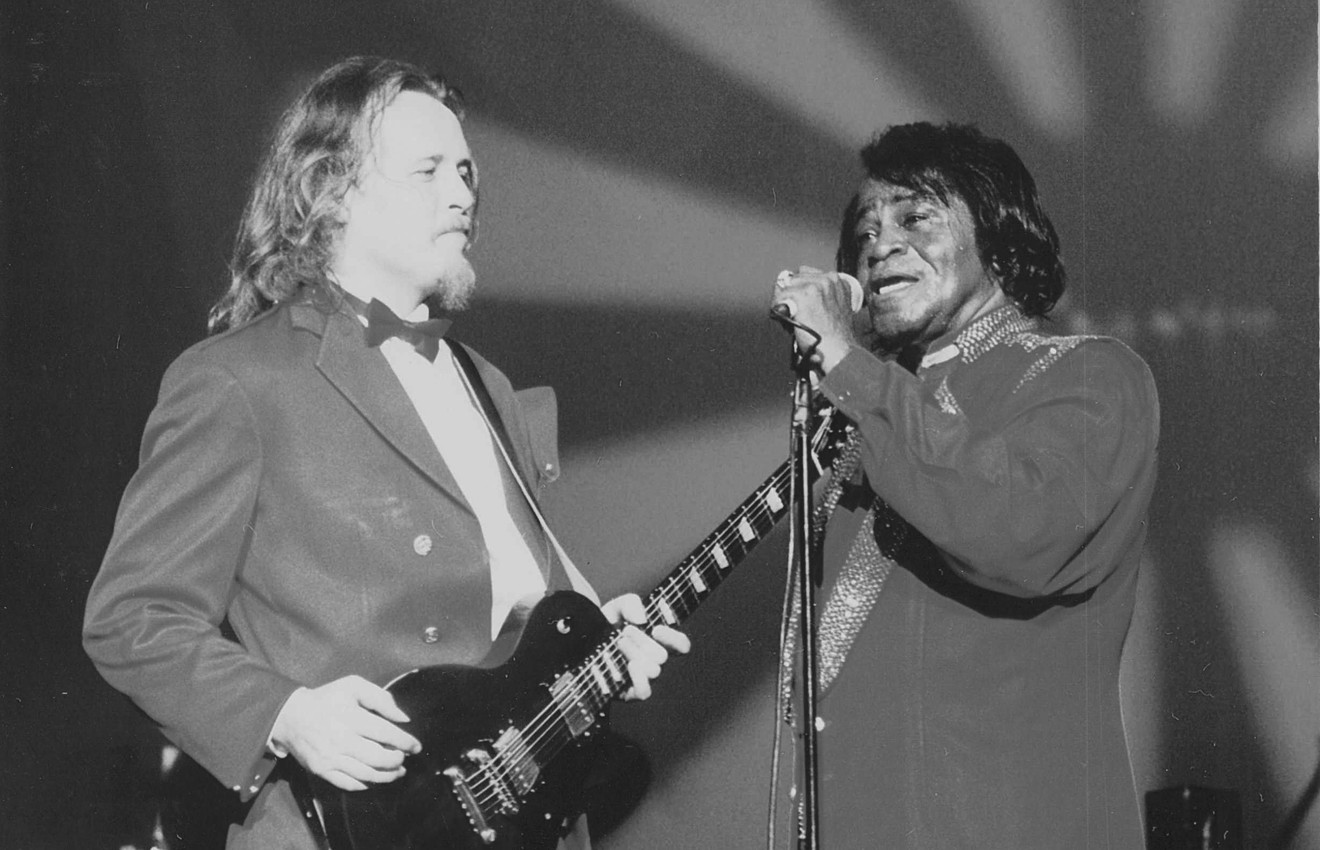 Damon Wood (who James Brown always called "Damien") and the boss onstage. Photo courtesy of ECW
Working for the Man, Playing in the Band: My Years with James Brown
By Damon Wood with Phil Carson
320 pp.
$26.95
ECW

By almost every written account by journalists and band members, the Godfather of Soul was a hard nut to work for, and guitarist Damon Wood knew that. But when he received a call in 1998 to drop everything and fly from the United States to Greece to play lead guitar for a show – that took place just four hours after he landed with no rehearsal – it was the start of his seven year musical odyssey as one of the “Soul Generals.” 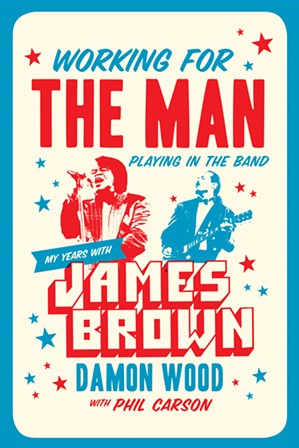 Book Cover by ECW
That James Brown was then in his sixties didn’t mean that the notoriously commanding boss was going to let up the pressure on his 20+ member backing band. Or on himself. Even into his senior citizenship, Brown didn't seem to relinquish the sobriquet of "The Hardest Working Man in Show Business."

“Of course, it’s well known that working for Mr. Brown could be a tough gig. That was no less true in his later years,” Wood writes. “He could be charming, hilarious, kind, thoughtful, scary, intimidating – all at the same time. You had to want that job just to get it. And you had to work doubly as hard to keep it. Working for Mr. Brown meant recognizing that he ruled the center of the universe.”

As any member of Brown’s bands through the decades knows, you had to be on your feet and mental game at all times. No show had a written set list. The boss might decide to shift tempos, call out a soloist, or change up tunes from night to night with sonic curveballs decided on a whim. Band members were expected to interpret all of this mostly through Brown’s hand gestures on R&B classics like "I Got You (I Feel Good)," "Get Up (I Feel Like Being) A Sex Machine," "Please, Please, Please," "It's a Man's Man's Man's World," "Super Bad," and "Living in America."

If a band member would protest that they were playing it just like the record that hundreds or thousands in the audience had grown to know, the mercurial Brown’s answer would always be the same: “they cut it wrong.”

Those same hand gestures could censure a player who hit a bum note or didn’t have enough shine on their shoes or ironing on their tuxedos (which in many cases didn’t even belong to the player). A flash of five fingers meant a $5 fine. If Brown repeated the gesture five times, that was $25 deducted from the evening’s pay. Wood saw band members hired, fired, quit, and rehired all on the same tour.

As a longhaired white player in a mostly black band, Wood says he got plenty of good natured ribbing, but learned a lot in his “Trial by Funk.” Brown would be known for fining bassists and guitarists for strumming on a upstroke instead of the R&B sold down stroke – something Brown’s ears could pick up even with his back turned and in the middle of a typically screaming vocal delivery.


“Trying to please him was aiming at a moving target, apparently by design,” Wood offers. Still, he relates plenty of anecdotes where Brown could turn around and do something generous or kind. It appears, according to the old soul song, there is definitely a thin line between love and hate. Wood kept on, though, both to challenge himself and have a steady gig.

Some of his most surprising observations are how old school Brown and his company ran the tours and handled booking and money, even in an age where advancements in technology and organization and buses would have made things far easier, comfortable (for the band – Brown himself traveled in style), and less costly.

Still, any stage that James Brown could play, he did: from tiny clubs and theaters to festival grounds and stadiums – if a promoter had the cash to book and provided the equipment in the rider, James Brown would come. The band played shows in Kuala Lumpur and Conway, Arkansas within 72 hours of each other. And globe-skipping international travel was the norm.

Wood writes frequently of the dichotomy within his boss. “Mr. Brown could be such a strange mixtures of your friend and your tormentor.” He also calls working for Brown a “dynamic balance of joy and frustration.”

But when the on-stage jabs, the chintzy travel accommodations, shaving of paychecks, and the unwarranted firing of his fellow guitarist became too much, Wood quit right before a show.

He recalls telling Brown in a tense conversation he didn’t want to hear the truth about a lot of things and treated people poorly who had dedicated their professional and in some cases personal lives to him. A year later on Christmas Day, 2006, James Brown died.

Working for the Man may sound like an axe-grinding book on the surface, but it truly is not. Wood balances his admiration and admonition for James Brown, and presents it in a factual way. And it’s a great peek behind the curtain of the Hardest Working Man in Show Business who, it seems also had the Hardest Working Band in Show Business.
KEEP THE HOUSTON PRESS FREE... Since we started the Houston Press, it has been defined as the free, independent voice of Houston, and we'd like to keep it that way. With local media under siege, it's more important than ever for us to rally support behind funding our local journalism. You can help by participating in our "I Support" program, allowing us to keep offering readers access to our incisive coverage of local news, food and culture with no paywalls.
Make a one-time donation today for as little as $1.