After All These Years, Jefferson Starship is Still Flying High 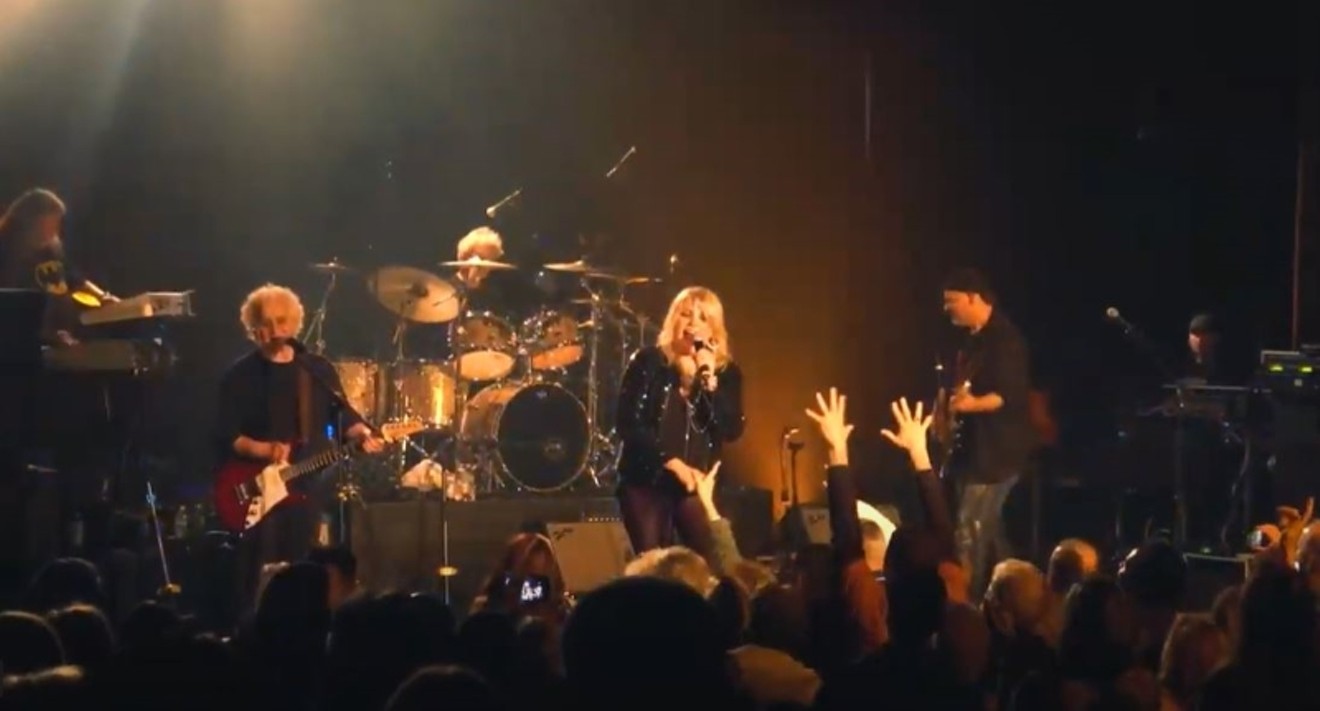 As is the case with many long-running bands, the Jefferson Airplane / Starship saga is a complex one, with many twists and turns over five decades. Lots of names, lots of musicians, and a few lawsuits.

With David Frieberg the only founding member (ca. 1974) of Jefferson Starship still on board, the band continues to tour, both domestically and internationally.  The Starship will touch down at the Dosey Doe Big Barn on Wednesday, September 7.

New, younger players have taken the places of those who have either passed on or left the road. One of these musicians is guitarist Jude Gold, who has been playing with the band for over 10 years. Gold grew up in the Bay Area, so he is well-steeped in the musical tradition and history of San Francisco.
Speaking from Virginia Beach, VA on a rare day off, Gold explains how he got the gig. “Part of it is just being in the family of musicians,” Gold says, noting that, starting in the late ‘90s, he played with current Jefferson Starship drummer Donnie Baldwin (Elvin Bishop, Pablo Cruise) in JGB, a group largely made up of former members of the Jerry Garcia Band. “Coincidentally,” Gold continues, “in the 2000s, I played with Cathy Richardson, the current lead singer of Jefferson Starship. At that time, we had the same manager. So there were some connections. And when they needed a new player, I hopped in, and we went to Israel and Italy. It just was a really great fit.”

Gold’s familiarity with the band began with one of the first concerts that he attended. “Yes, I was a fan," Gold says, “because I knew the music from the radio. But also, when I first discovered concerts at age 12, the fourth concert I ever saw was Jefferson Starship, because I loved their album Modern Times that had just come out. They really surprised me, because I knew it was going to be good, but by that time, I had already seen The Who, AC/DC, The Clash, and Ozzy Osbourne. They surprised me at how hard they rocked.”

The first members of Jefferson Airplane / Starship were noted Haight-Ashbury LSD vanguards, not just hippies but proto-hippies, blazing a trail – along with contemporaries like the Grateful Dead and Quicksilver Messenger Service - that led a generation to consume psychedelic substances, question the status quo, and head wherever those activities might lead. Were there any remnants of this history evident when Gold joined the band?

“The musical adventure part of it, absolutely, 100 percent,” Gold says. “And to this day it’s still there, like anything can happen. That’s what I want when I see a rock concert. An element of ‘live without a net,’ a little bit of danger and spontaneity.”

"[Paul Kantner] used to say that they discovered Fender Twin Reverbs and LSD in the same week."

Though Gold began his musical fandom with disco music and funk from the late ‘70s, his mom made sure that he was aware of the rock and roll roots. “When I turned on the radio for the first time, Nile Rodgers from Chic - and all the other hits that he produced and played guitar on, like Diana Ross and Sister Sledge ‘We Are Family’ – he was my first guitar hero. Because you listen to “Le Freak,” the guitar part, I was like, ‘I want to play that!’” Gold recalls.

“At that point, I was just a kid, eight or nine years old, and I was listening to all that, plus some of the crappier stuff that was on the radio, the disco stuff, and my mom had enough of it. She went to the used record store and came back with three Beatles album, a Cream album, and a Chuck Berry album. She was tired of the disco.”

The music on those albums made a distinct impression on young Gold. “I loved the Beatles so much, and I still do,” he says. “All that stuff. I’m an equal-opportunity musician. I can’t name a genre that I don’t love. Groove can be found in any genre, and melody can be found in any genre. Those two things together, groove and melody — and great riffs – and I’m in heaven.”

Gold considers himself fortunate that he joined the band when Airplane founder Paul Kantner (who died in 2016) was still around. “Paul Kantner, our brother, our leader, was the visionary behind Jefferson Airplane and Jefferson Starship, and he had that great spirit of adventure,” Gold says. “It seemed like we had a cool connection. I would always look at him across the stage, and he would just give me that look, that little light in his eyes like, ‘Go for it. Play something crazy!’

“It was a wonderful thing to be up there with Paul Kanter, who had a thundering 12-string through two Fender Twins.” For the uninitiated, these amplifiers were cornerstones of the Fender line and way, way loud. “I really felt the connection to the beginning of the sound. He used to say that they discovered Fender Twin Reverbs and LSD in the same week. Do the math and you can see where that experimentation came from,” Gold points out.
And then there’s Grace Slick, the notorious former lead vocalist for both Jefferson Airplane and Jefferson Starship, who has recently returned to the fold by collaborating with some of the current band members on the song “It’s About Time,” featured on the album Mother of the Sun. “You just never know what she’s going to say. She’s very smart and very spontaneous and doesn’t give a hoot what anybody thinks,” Gold says. “She is a brilliant firecracker. Her intellect is hilarious.”

In addition to his activities as a musician, Gold has pursued a parallel career as a journalist, writing for a number of music magazines, including Guitar Player, where he still serves as an editor. Was there ever a moment when he was intimidated or overwhelmed by the musician he was interviewing?

“The only time I ever thought, ‘Oh my gosh, am I going to be able to speak coherently or even complete a sentence?’ was when I did a dual conference call, and the publicist called me up and said, ‘OK, sit tight for 10 seconds, I’m connecting you to Angus and Malcolm Young,'” Gold recalls. “My first concert was AC/DC, which changed my life as a 12-year-old. Everything going forward has been different since I saw the power of that band. I was a little nervous at first, but after that it was great.”

As mentioned, David Freiberg, who just turned 84, is the sole original member of Jefferson Starship still on the road. “He is such an inspiration, because every year, he lives life to the fullest. Right now, to see him sing ‘Jane’ every night, and to have him just kick ass on lead vocals, up there with Cathy, they just work so great together. We should all be living our best lives in our 80s,” Gold says.
Then it was time for, as my Houston Press colleague, the esteemed Bob Ruggiero, terms it, the “hang up question.” That is to say, a somewhat impertinent question that just might cause the interviewee to slam down the phone. But if that happens, at least it was the last question you had planned on asking, having already obtained plenty of material for the story. My question was, “Why do people hate the song ‘We Built This City on Rock and Roll’ so damn much?”

“That’s a good question,” Gold says, pausing for a moment to gather his thoughts. “There are multiple layers as to how I would answer that. First of all, there was a Blender article – which was a very funny magazine when it was out. Very edgy, and they used to make fun of everybody, and it might have been them who proclaimed that it was the worst rock song of all time. And then, I think also, that it’s emblematic of the synthesizer / drum machine age of rock music. Really polished-sounding. But it’s actually a really good song. It’s really well-constructed. The lyrics are pretty cool. Those lyrics are about musicians’ struggles. And the thing to understand is that if it were done with more of a rock edge, I don’t think anyone would be saying that, because the song itself is really great. When we play it, we rock it out!”

Jefferson Starship will play the Dosey Doe Big Barn at 8 p.m. on Wednesday, September 7. For more information, visit doseydoetickets.com.  Tickets, which include a three-course dinner, are $139 - $198.
KEEP THE HOUSTON PRESS FREE... Since we started the Houston Press, it has been defined as the free, independent voice of Houston, and we'd like to keep it that way. With local media under siege, it's more important than ever for us to rally support behind funding our local journalism. You can help by participating in our "I Support" program, allowing us to keep offering readers access to our incisive coverage of local news, food and culture with no paywalls.
Make a one-time donation today for as little as $1.